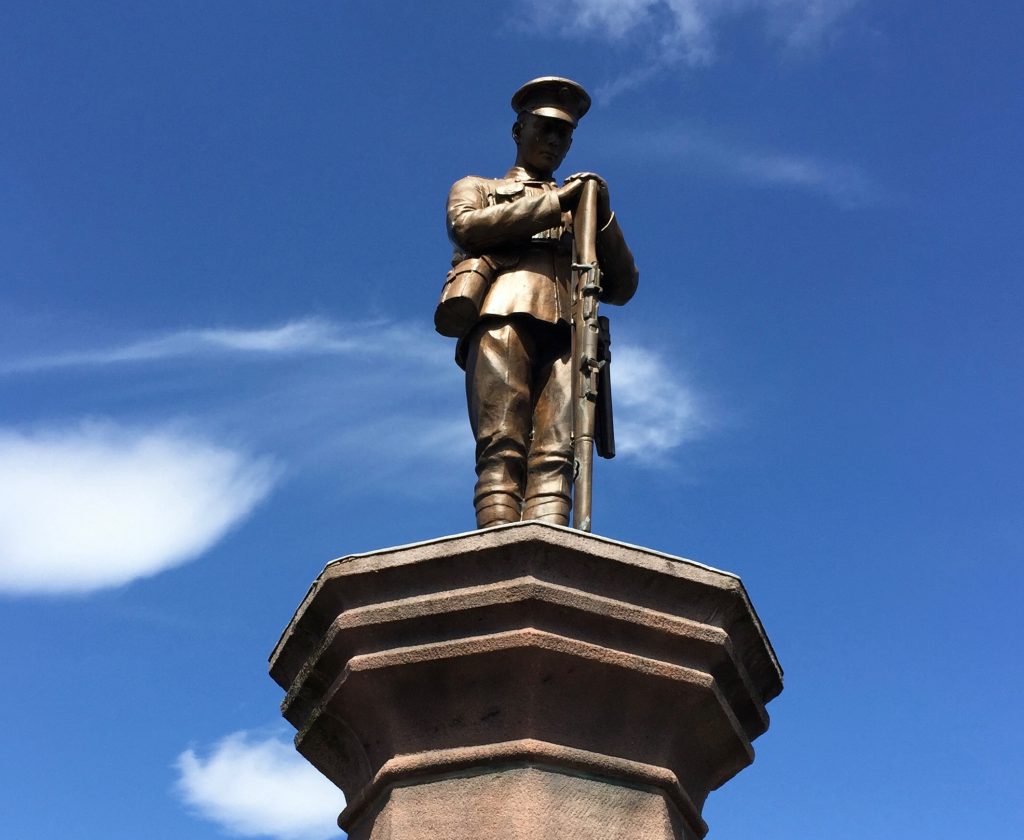 Back in May I completed the documentation of the second part of the Lancashire Way – the Central Loop. With just over 100 miles of walking and 13,000 feet of climb it is a reasonable test of endurance for most! My aim was to test the walk, make sure that it worked well and for once to try and savour it for what it is – a long distance walk to be enjoyed. No need to write notes, try different routes – just enjoy. Weather permitting that is!

It took six days in total but it could be done in five if required or seven as my last day was a long one!

Day 1 – Half day beginning in Preston just after noon. Completed Stage 17 – 4 hours and 13 miles ending in Riley Green and a well earned pint at the Royal Oak. It was slightly longer than the official walk due to the odd diversion for cows, having had the odd bad experience this year. The pedestrian bridge over the River Darwen at Coupe Green is being replaced so my detour was longer than planned. A plus point of the extra miles was that I came across Kathleen Ferrier’s memorial garden and house on Blackburn/Hoghton Road in Higher Walton. Being relatively local I was picked up by my wife and taken home, which was a blessing as the obvious accommodation nearby – the Grill and Grain Inn – was burnt down in a fire in the Spring. Whilst the highlight is Houghton Towers there are good stretches of walking particularly along the River Darwen near Samlesbury Bottoms.

Day 2 – Stages 18 and 19 – 17.3 miles from Riley Green to Whalley. Time taken about 6 hours. Whalley is a great ending and there were some excellent parts to the day helped by sunshine. These included the gorge of the River Darwen, Pleasington, the stretch near Billinge Hill, the walk around Woodford Park, Dean Clough Reservoir and the views from above Whalley. Taken home again! 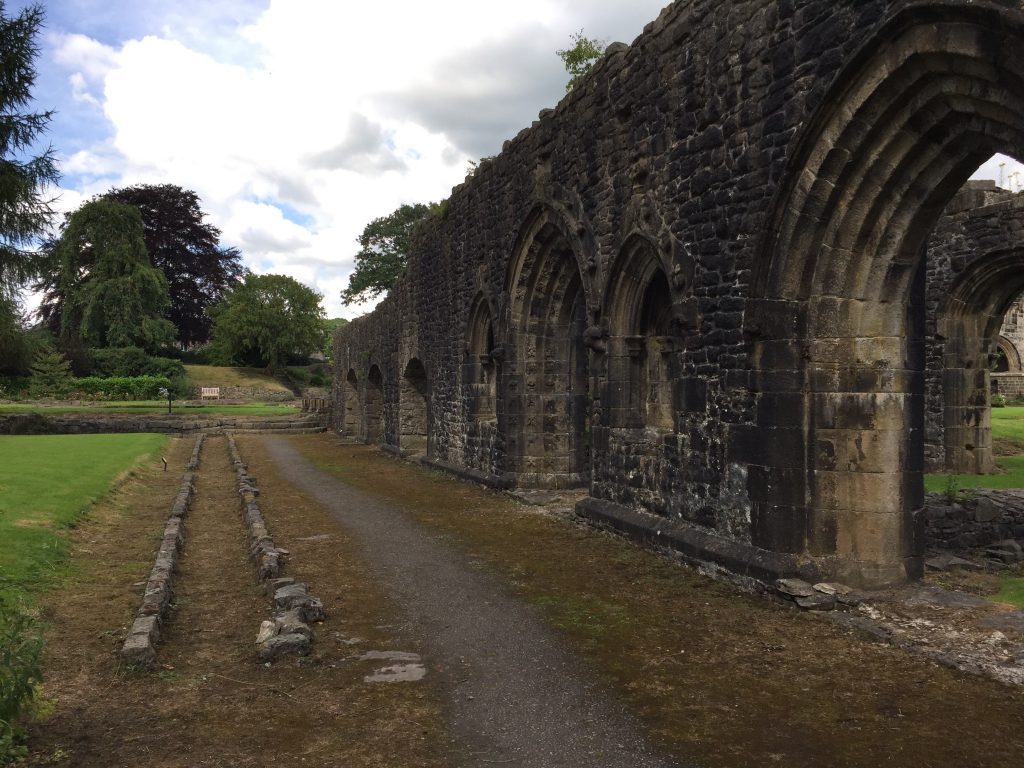 Inside the remains of Whalley Abbey

Day 3 – Stages 20 and 21 – 13.4 miles – from Whalley to Downham via Barley and Pendle Hill. I was joined by my wife as I had promised her a night at the Assheton Arms in Downham. So I was carrying overnight baggage for two, which took its toll over the 2,800 feet of ascent. Did I really make this two stages and drop down into Barley to then have to regain much of the height lost at the end of Stage 20? But I think it was worth it and we both enjoyed a pot of tea and a cake at the cabin by the public car park. The Assheton Arms, which has recently been refurbished, was excellent. The food was fantastic and our room had views up to the tops of Pendle, which was by now covered in mist.

Day 4 – Stages 22 and 23. A relatively modest day of 12.3 miles. The highlight has to be Newton in Bowland with its many lovely properties but the War memorial at Slaidburn is still one of the best I have seen. The climb up from the village of Grindleton surpassed my expectations and the descent down to the Hodder is definitely the best way. We picked up the car and spent the night at the Inn at Whitewell – beautiful views from the terrace – and a real treat if a little expensive. 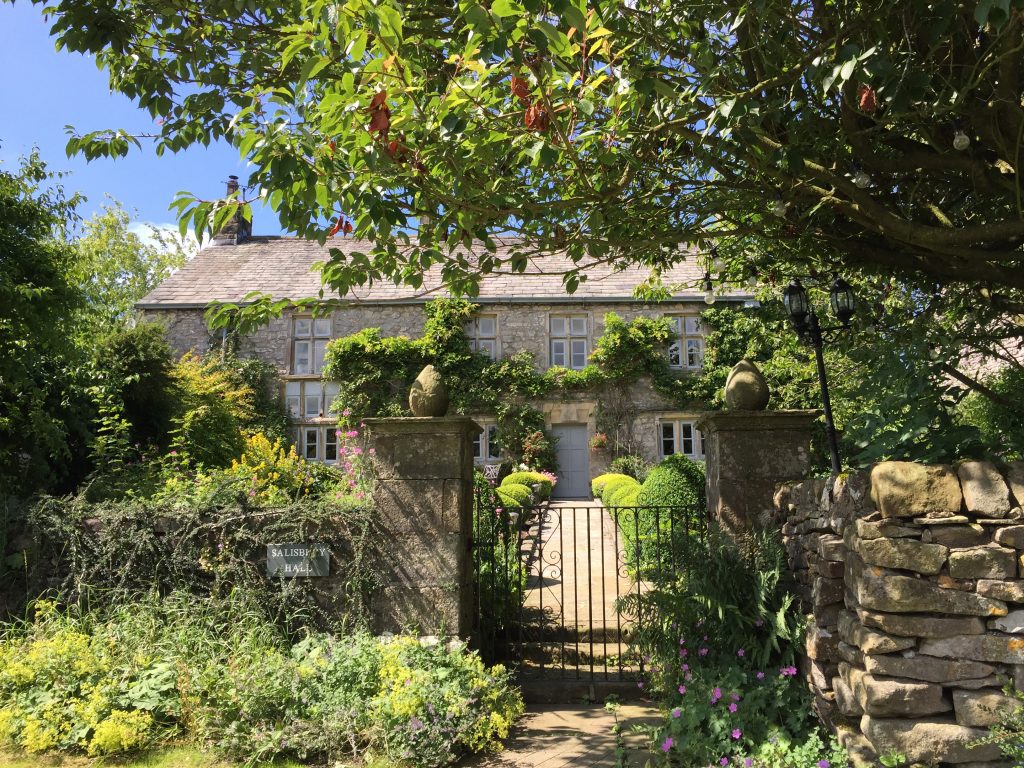 One of the many lovely houses in Newton

Day 5. Back on my own, I completed Stages 24 and 25 – just over 21 miles and over 3,000 feet of ascent – a good 8 hours walking. The morning was dull, which may be why I was a little disappointed with the Stage to Dunsop Bridge. It begins well, with a tramp across fields towards Croasdale Beck but then a doggy section of little used path up to the Hornby Road made me wonder whether there was a better alternative! The path down to Whitendale is not much better but the final stretch into Dunlop bridge improved my spirits. A pint of milk and flap jack from Puddleduck’s for lunch helped. The afternoon improved as the sun eventually came out and the views from Fiensdale Head to Parlick were great. I have re-routed the final section into Chipping as a result of bull signs and many cows along my original route via Wolfden Hall. So now the end of stage is a simple walk along the lane directly into Chipping. If you have just completed these two stages I think you will be glad of the simplicity of the new route. 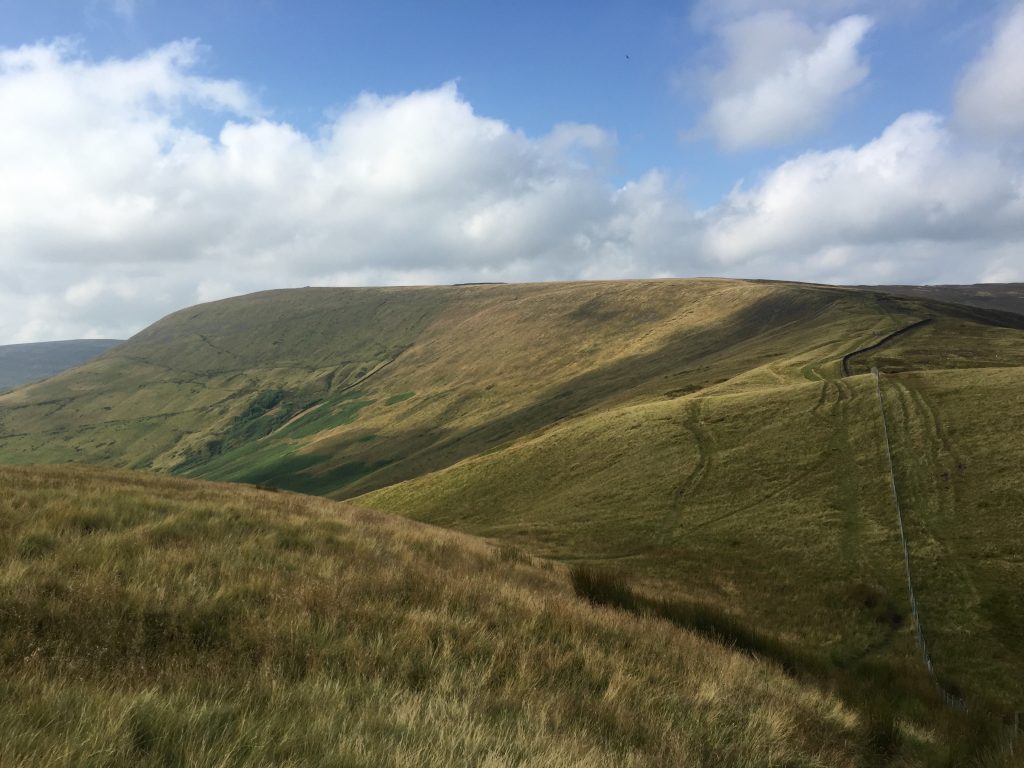 Looking back to Fair Snape Fell on climb up to Parlick

Day 6. The plan was to try and make my way back to Preston i.e. Stages 26, 27 and 28 – a total of 27 miles and beginning with the climb over Longridge Fell. I had been bragging that in the previous five days I had not had to wear my cagoule once, although there were a few close calls. Was this really Lancashire with no rain? Well on the sixth morning there was enough rain for all six days! But on I forged and by midday it had stopped. The stretch along the Hodder, after Longridge Fell, was lovely and I even saw a heron. The walk along the avenue away from Stoneyhurst and then into Hurst Green is quite unique. I had to abandon the crossing of the Ribble via the Dunkley suspension bridge as it is still shut – 18 months on! – so I took the alternative route along the Ribble Way into Ribchester. It was 2 o’clock and I knew I could get back to Preston in time to be picked up. The last section included a few detours due to cows – real dairy country – but the last part of the day through Brockholes and along the Ribble was now in full sunshine. Apart from my feet I was now dry again.

Conclusion – a great six days walking through the wonderful county of Lancashire – its not all perfect but so many highlights.

200 years old this month!
Next
The LDWA walking the Southern Loop