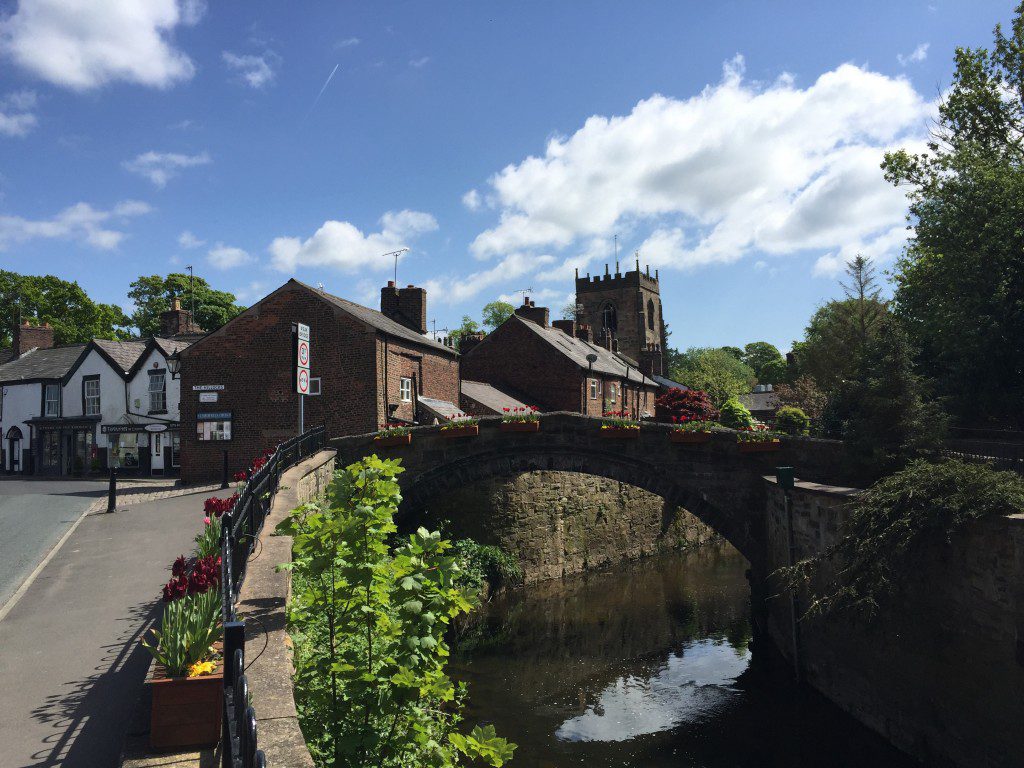 The beautiful village of Croston – the River Yarrow and St Michael’s Church.

Too many roads but the village of Bretherton is very pleasant and Croston quite beautiful!

A map of Stage 4 can be found below courtesy of Ordnance Survey maps. You can subscribe yourself using this link, https://osmaps.ordnancesurvey.co.uk, which will enable you to import the GPX file which can be downloaded below.

The walk starts at the junction of the A59 (the Liverpool to Preston road) and part of the old road – now almost a layby. Head south (right) to the roundabout. I really struggled with this part of the route. The easiest and quickest way to Croston is to take the first exit into Carr House Lane and follow the main road and then come off at Back Lane, which literally runs around the back of Bretherton to pick up the main road again just before Croston Railway Station. However, this would miss out Bretherton so you could just continue along the main road through Bretherton, and this would be the next best alternative to the official route itself. This would also enable you to take a cup of tea in the Vintage Tearooms as well as a quick look around the Old Corn Mill antiques “shop” with what must be at least 100 clocks – mainly grandfather clocks. Fortunately they are all working on different times so do not chime all at one, but intermittently whilst you brows. In additions if you fancy a beer then there is the Blue Anchor further along. Unfortunately the official route misses both of these out. There are number of footpaths which could be used to avoid the two main roads but none are especially agreeable. So to the official route but first take a look at Carr House which was built in 1613 and later used as a dolls museum. It is associated with Jeremiah Horrocks, who observed the transit of Venus in and around that time. At the entrance to the village of Bretherton is a stone mill type wheel commemorating this.

So take the second exit and continue along the A59 for about 800 metres. Take the small road on the left which advertises the Bank Hall Kindergarten. After passing some buildings on the right, the road turns 90 degrees left but straight ahead is Bank Hall. Unfortunately you cannot normally access the grounds but there is a notice board and if you make the effort you can see the old Jacobean House built from 1608 and further extended in the 19th century in a complimentary style. Unfortunately the house has been empty since 1945 and has fallen into serious disrepair. However, English Heritage undertook a feasibility study in 1996 and concluded that it could be saved and should be. However, despite the best efforts of the Action Group and Friends, including an unsuccessful appearance on the TV program Restoration, little work has so far been undertaken.

Continue along the road – presumably one of the original drives to the house until you reach the gate House and re-join the public roads. Continue straight ahead and then shortly after, at the T junction, turn left to the main road through Bretherton.

Bretherton is an old village dating back to at least 1190 and grew largely with the success of Bank Hall and the farming of the surrounding mosses. There are many impressive buildings, now mainly converted into houses on the southern side of the main road suggesting significant agricultural wealth. In addition, they were most certainly god fearing residents with a Methodist Chapel (now a house), a Congregation Church rebuilt in 1896 and a traditional Church of England Parish church. 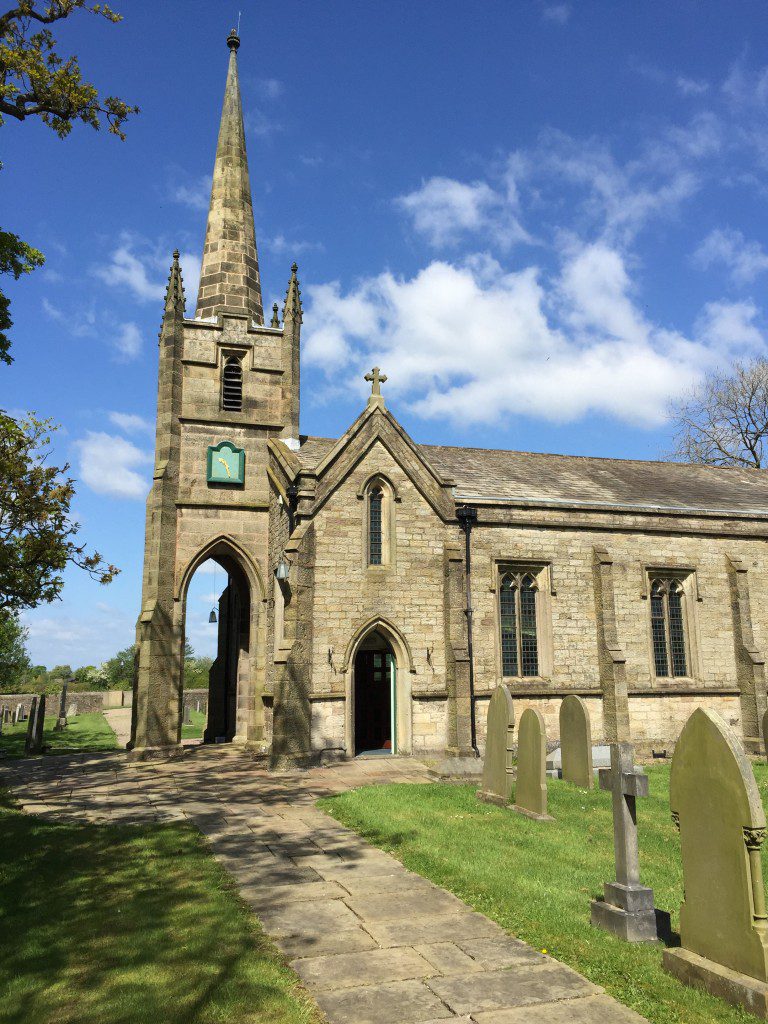 Go into the village bakery and buy provisions – the smells are wonderful and note the old school house with stone carving above the main door.

Continue past the modern day primary school and look out for the road on the right called Bamford’s Fold. Take this road which then becomes almost a track with a sign saying “Unsuitable for Motor Vehicles” Continue straight on to what is now Sarah Lane until you meet Back Lane – a single track tarmac road. Turn left and continue until you meet the main road. Turn right and follow the road until you enter Croston by crossing over the railway from Preston to Liverpool. Bear right and walk along this road until you come to another junction. Proceed straight ahead to the old historic centre of Croston.

Croston dates back to the 7th century, when St Aidan erected a Cross at this presumably important crossing point of the River Yarrow and hence the name of Cross Town or Croston. Look out for the Stone Cross at the end of Church Street, which marks the end of this stage – this was erected in 1953 but is much older. In the centre of this village is the Gothic church of St. Michael’s which is reached by the small, narrow cobbled Church Lane flanked by attractive terraced housing. 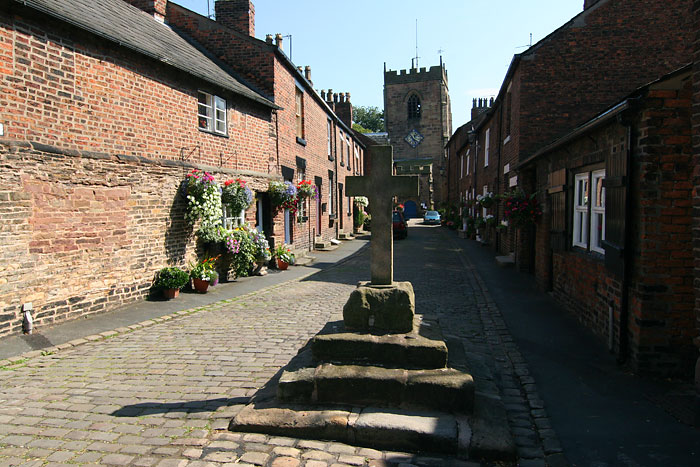 Church Lane Croston, with St Michael’s church at the end.

In 1580, potatoes were brought by Sir Walter Raleigh from America. The story goes that his ship was wrecked off Hesketh Bank and the local farmers ‘acquired’ the strange vegetable and planted them in Croston, initiating potato farming in Lancashire which still remains today. This has fed the many excellent fish and chip shops in the area and in Lancashire generally.

I have not been able to locate any overnight accommodation within Croston so the Rufford Arms Hotel is the nearest hotel – only just over 2 miles away. In the village of Eccleston, 3 miles away there is a good B&B – Parr Hall Farm. Alternatively you can catch a train back into Preston or south to Burscough. Chorley and Leyland are other alternatives.

There is parking at the very beginning of the Stage on the road – the remains of the old Liverpool Road just off the new A59. Complete Stage 4 by walking to Croston via Bretherton. The shortest return option is to start Stage 5 but at the very beginning do not turn left on to Carr Lane but go straight ahead and pick up Drinkhouse Lane. Then turn right along either Cottage Lane or Finney Lane to Great Hanging Bridge. Cross the River Douglas and return to the A59 via the western bank of the river. The total distance is just under 8 miles.

Alternatively begin Stage 5 by following Carr Lane out of Croston. before reaching Mawdesley turn right and head for Rufford via the Sluice. Please note that during the summer the path can be affected by crops but please just keep to the sides of the fields. Cross the River Douglas and then return to the A59 at Bank Hall via the path along the River Douglas or the towpath (my preference) along the Rufford branch of the Leeds and Liverpool Canal. The total distance is around 10.5 miles.