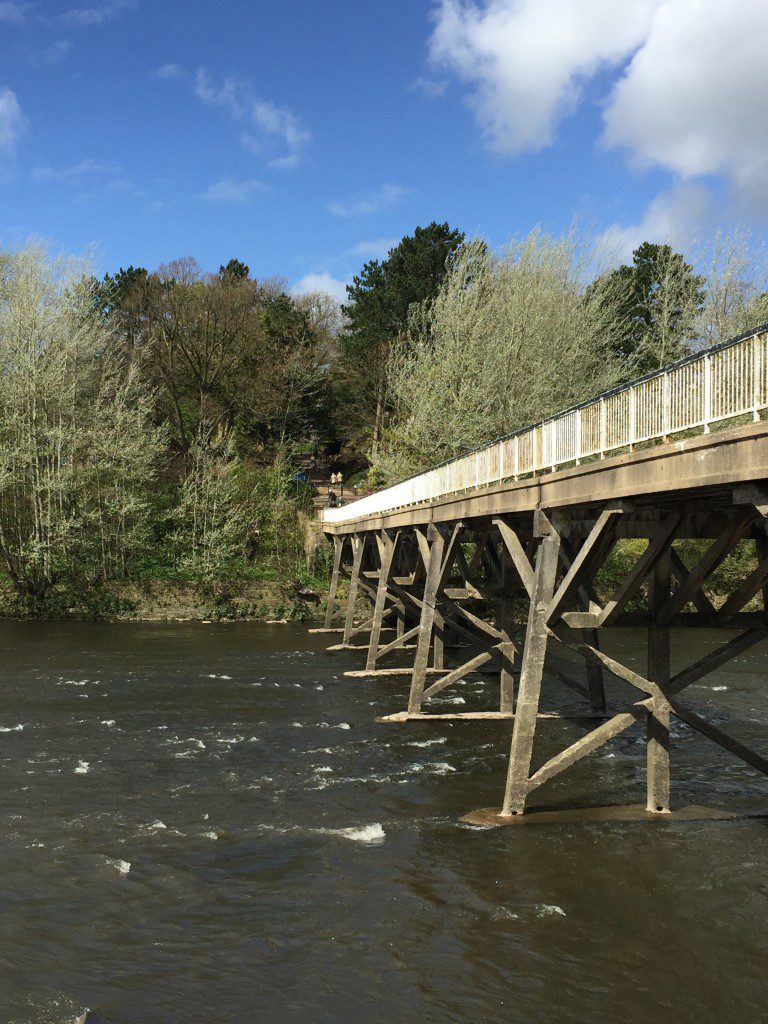 Crossing the Ribble via the replica Tramway back in to Avenham Park and on to Preston town centre. NB Currently closed!

The final Leg of the Southern loop, with a leisurely stroll back into Preston via Cuerden Valley Park, Lostock Hall and the remains of the Tramway.

Maps of Stage 16 can be found below courtesy of Ordnance Survey maps. You can subscribe yourself using this link, https://osmaps.ordnancesurvey.co.uk, which will enable you to import the GPX file which can be downloaded below.

The above map is of the Original Route and not the current Diversion.

The Map below incorporates all the current diversions. If in doubt follow this route.

Unfortunately there is a temporary (Hopefully?!) diversion to the Lancashire Way when we pass under the M6 Motorway on the A49 just shortly after Cuerden Hall. The route from this point went into fields and headed west down to Stoney Lane and then north along Old School Lane and then Todd Lane to pick up the Old Tramway. However, this area, known as Cuerden Green at the end of the M65, is now being developed into a major employment and retail zone, including a new Ikea store. Whilst it initially appears as if the path is still open the way is barred by metal fencing just before Stoney Lane. I hope that the route will be re-opended as it was undoubtedly the best way to pick up the Tramway, which is the ideal route back into Preston. It prolonged the rural nature of the walk, avoiding the retail and industrial development of southern Bamber Bridge, and then followed a quiet and pleasant road through Lostock – Todd Lane. The alternative now involves following the National Cycle Route No 55 through the south of Bamber Bridge – Please see below for details.

Cross the A6 and proceed north. Immediately after the school, turn left and follow the road (Factory Lane), which then becomes a tarmac path where there is car park on your left. Continue along the wide path along the valley (Lostock River) until you reach the main road. Turn right, cross the road and look out for the entrance to Town Brow car park on your left. Do not enter the car park but pick up the path to the right of the car park entrance. Continue north along the valley bottom along the wide tarmac track. After about 1km you will come to a ford over the river and then a bridge across the river and the junction of a number of paths.

DETOUR  – There are now three detours that need to be made. Please follow the italic route into Preston. I have kept the original route in case these are reopened. Firstly the original route heads up to Cuerden Hall but the grounds are currently closed as the Hall is occupied by a Sue Ryder care home. Secondly the route across fields to Todd Lane is closed due to construction and thirdly the old Tramway across the Ribble is currently closed. So we must make several detour as follows.

At the junction of the paths with a sign post turn right and continue to follow the tarmac path north, ignore paths off to the right and then cross over the M6. Continue straight on to the car park and then the A49.

We will now follow National Cycle Route 55 into Preston.

Cross under the huge bridge over which the M65 passes and then on to the cross roads with the A6. Note the old entrance to Cuerden Park on your right. Carry straight on over the cross roads and then ensure that you are on the western/left hand side of the road and then turn left into Havelock Road shortly after the Cuerden Grange Care Centre.

Continue on bearing first left and then straight on to Holme Road, which ends at the gates of Lancashire County Council’s Highway Department. Pick up the cycleway on your right, which follows the River Lostock, and brings you out on to Cuerden Way. Turn right and follow Cuerden Way until it bends around to the left. At this point bear right on to what looks like the entrance to the Spectacle Factory. Then turn right and follow the cycleway, past the car park for Matalan, over the River Lostock, past the huge building supplies/reclamation yard and then under the railway – you may need to bend down here a little! Pass Bamber Bridge Football club and descend on to Brownedge Road. Turn left, go under the A6, and then turn right, when you come to the main road. Cross over and look out for the cycleway, which enters trees just before the roundabout. This brings you on to what is known as the Old Tramway, but is in fact the line of an old railway.

Follow the cycleway to the first road – Todd Lane, where we pick up the original route of the Lancashire Way.

Follow the Tramway for almost a mile until you come to a junction of paths marked as Carr Wood on the OS map. The line of the railway goes left from here and striaght on is the actual line of the old canal tramway – you can see this coming in from your right.

Bear left and follow the path that runs adjacent to the old tramway. This brings you up on to the line of the old East Lancashire railway and then over the Ribble into Avenham and Miller Parks. Bear right off the track just after crossing the River which takes you down to the Pavilion and Japanese Gardens. You should then be able to find the entrance to the park and then carry straight on into Winckley Square. Please note that this has recently been refurbished and is worth a quick detour.

Continue on with the square to your right into Chapel Street until you meet the main thoroughfare in Preston town centre – Fishergate. Turn left and proceed until you come to Preston Railway Station on your left.

IGNORE – ORIGINAL ROUTE.  Take the path that goes straight ahead and is signposted to Pinetum and Walled Orchard. This snakes up the west side of the valley and then back upon yourself. On your right you can see Cuerden Hall. You will shortly come to a gate and a kissing gate. Pass through this and take the path to your right, with the very modern offices to your left and then on to the grounds/gardens in front of the hall. 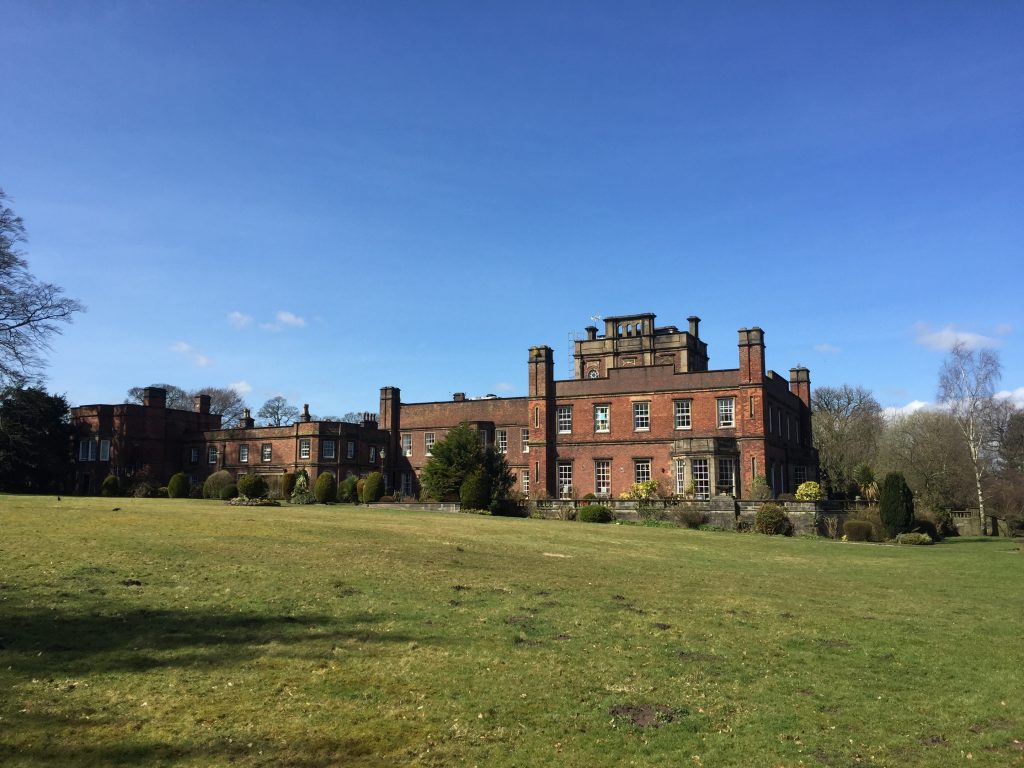 Cuerden Hall is Grade II listed building dating from 1717, although there are records of a house on the site going back to 1199. Until 1906 it was the family house of the Parker’s with links to the Banastres at Bank Hall. Much of the house that you can see now related to a major remodeling of the house between 1816 and 1819 based upon designs by Lewis Wyatt. The surrounding parkland with its fine planting of woods, meadowlands and lakes covers 650 acres. From 1915 the House was used by the army, initially as a convalescent home for soldiers. It is now a care home operated by the Sue Ryder charity, who run a jumble/furniture sale on certain days of the week from the old stable buildings. 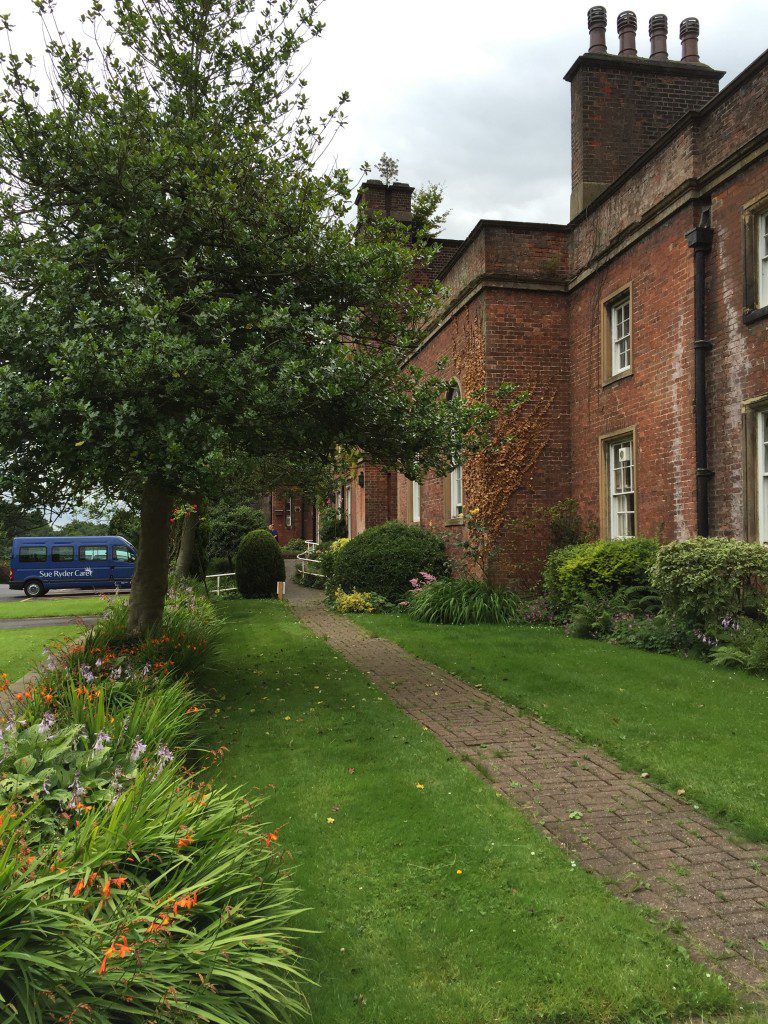 Continue along the edge of the garden to the house and then straight on past the steps which lead up to the house until you can see the car park on your left. Enter the car park and proceed keeping the house on your left and then pick up the entrance drive to take you out of the property to the road. Turn right at the road (Shady Lane) and continue until you reach the A49. Cross over and turn right and go underneath the M6 motorway. IGNORE up to here.

Immediately after the bridge look for a track on your left. Squeeze past the barrier and then climb over the ladder stile next to the green gate. Then look out the stile on the right with the small yellow footpath marker. Please make sure that it is the first gate and not the second, which is private property.

Enter into the field adjacent to the motorway. Please note that the OS maps do not show a path but clearly there are footpath markers. The path is as result not clear but follows the wooded area on your right. Continue along this boundary over two more stiles until you join a footpath which cuts across you. Turn right on to this path and shortly after join Stoney Lane. Turn left and proceed down the lane. Shortly before the main road take the tarmacked lane to your right and proceed to the dual carriageway. Cross over and continue along the lane opposite – Todd Lane. At the traffic lights continue straight on along the continuation of Todd Lane. After the school on your left, look out for the footpath sign which allows you to join the tramway. The building on the right hand corner is the old railway station.

Follow the Tramway for almost a mile until you come to a junction of paths. The line of the railway goes left from here and we now bear right and join up with the actual line of the old canal tramway – you can see this coming in from your right. The canal Tramway closed in 1860 after almost 60 years of service. The track to the left, which we have been following for some time now is the line of the old East Lancashire Railway built in 1850, which also crosses the Ribble shortly and we saw on first Stage whilst in Avenham Park. 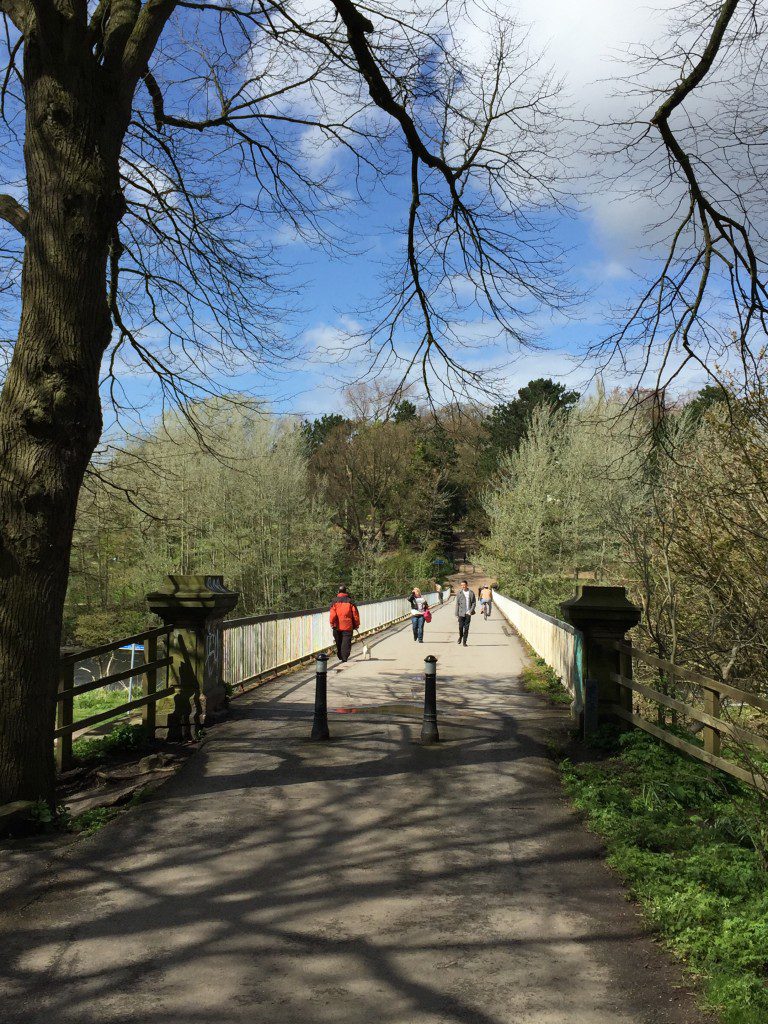 The Tramway across the River Ribble.

Take the Tramway over the Ribble into Avenham Park. Continue straight on past the Belvedere and around the top of the park, keeping Bushell Place on your right. Pick up the Avenham Collonade and proceed to Ribblesdale Place. Turn left and follow this road around into Winkley Square. Continue on with the square to your right into Chapel Street until you meet the main thoroughfare in Preston town centre – Fishergate. Turn left and proceed until you come to Preston Railway Station on your left.

There is lots of accommodation within Preston if you need to stay the night before travelling home.

This is best achieved by using a bus to return at the end of the Stage from Preston to the start point – Bus Service 125 every 10 minutes from Preston Bus Station. The bus stops outside St John’s church just a little way past the School. There is a free car park opposite the Primary school on the corner of Factory Lane at the very beginning of the Stage.