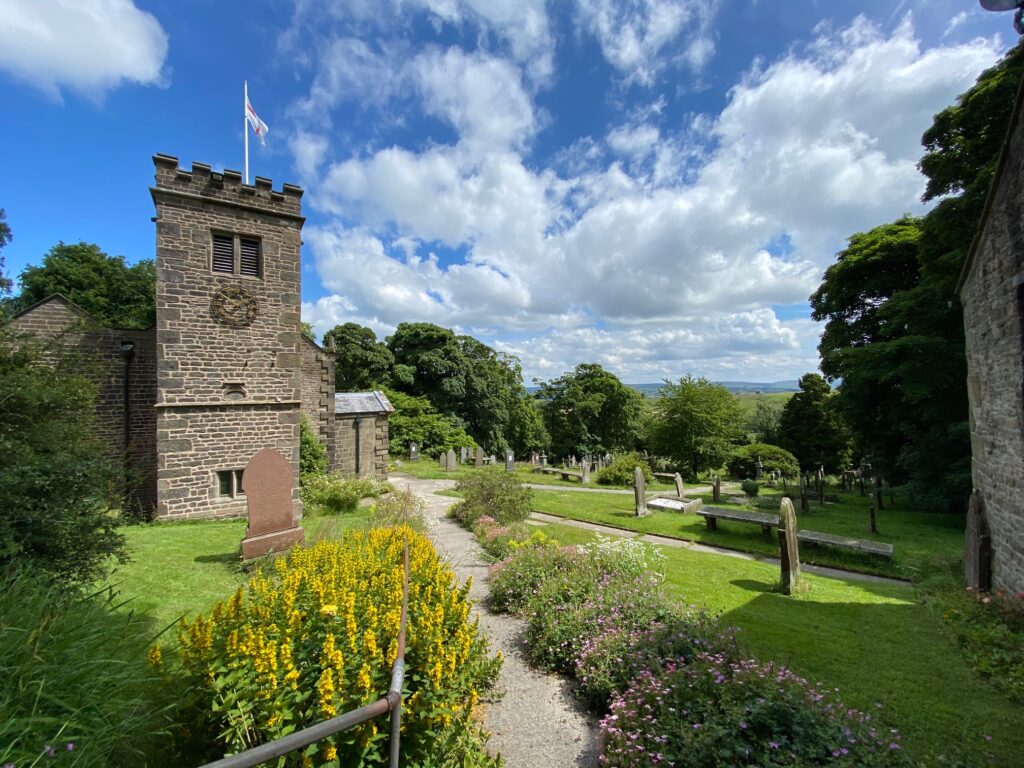 A simple Stage with views across the Sabden Valley towards Pendle. The highlights are the villages of Newchurch with its Pendle Witches association and Roughlee with it’s Alice Nutter statue.

Map of Stage 44 – Unfortunately OS maps of the Eastern Loop are not provided. However, if you e mail lancashireway@aol.com and a full GPX file of the Eastern Loop will be sent to you and this can be down loaded on to OS maps at www.osmaps.ordnancesurvey.co.uk. As an alternative you can view the interactive Map of the Stage below and/or download the GPX file for this Stage only by following the instructions below.

There were once many across England and Scotland and their purpose was to provide rural accommodation and refreshments for visitors from the nearby mill towns, thereby encouraging access to the countryside for the working man and woman.

Follow the lane just to the left of the church and village hall – Kiln Hill. This bears right and then there is a large wooden gate with a small gate stile on its right, which enters a field. Go straight ahead, up the slope and then maintain the same bearing through two stiles until you come to a road just to the right of two properties. Turn right and then left at the junction just a little further on. After about 150m just as the road starts to descend into the valley look for the stone gate stile on the right. Cross into the field and then bear left following the contours to a marker post and then through some gorse bushes and on to a gate stile above the property called Higher Town. Pass through the stile and head down the slope to the boundary wall just beyond the farm Higher Town. Follow the wall to a stone gated stile. Pass through onto a small embankment and follow this to the corner of a wall, which has a stile gate which allows you to cross into the adjacent field on the right.

Follow the fence towards the properties ahead – Tynedale House Farm. Do not use the gate to enter the track that serves the properties but continue parallel in the adjacent field. Then use the stile further along to access the track and cross straight over to another stile and onto a grassy/muddy track. Continue along this down the slope and then onto a proper track. When you come to a metal gate with a stile gate ignore this and turn right to another metal gate with a stile gate to the right hand side. Pass through and then carry straight on along the edge of the field over two stiles with the second entering the property called Moss End. Use the stile to enter the drive of the house and walk past the house. The continuation of the path and the stile into the next field is hidden on the left behind some trees just as we start to come out of the property and when the drive bears right. It is marked by a Pendle Way finger post. Continue in the same direction up the slope to several walls. Carry straight on through a gate stile ignoring the stone stile on your right. Pass through two more gate stiles and exit on to a road on the edge of Newchurch in Pendle.

Turn left and head up through the village. Please enter St Mary’s church of Witches fame. It is a lovely church and grounds and in the tower is the “eye of god”, which wards off evil spirits. At the front of the church is a grave belonging to the Nutter family. Next to the church is the Old School House. Continue up to the junction in the middle of the Village opposite the Witches Galore shop and café. 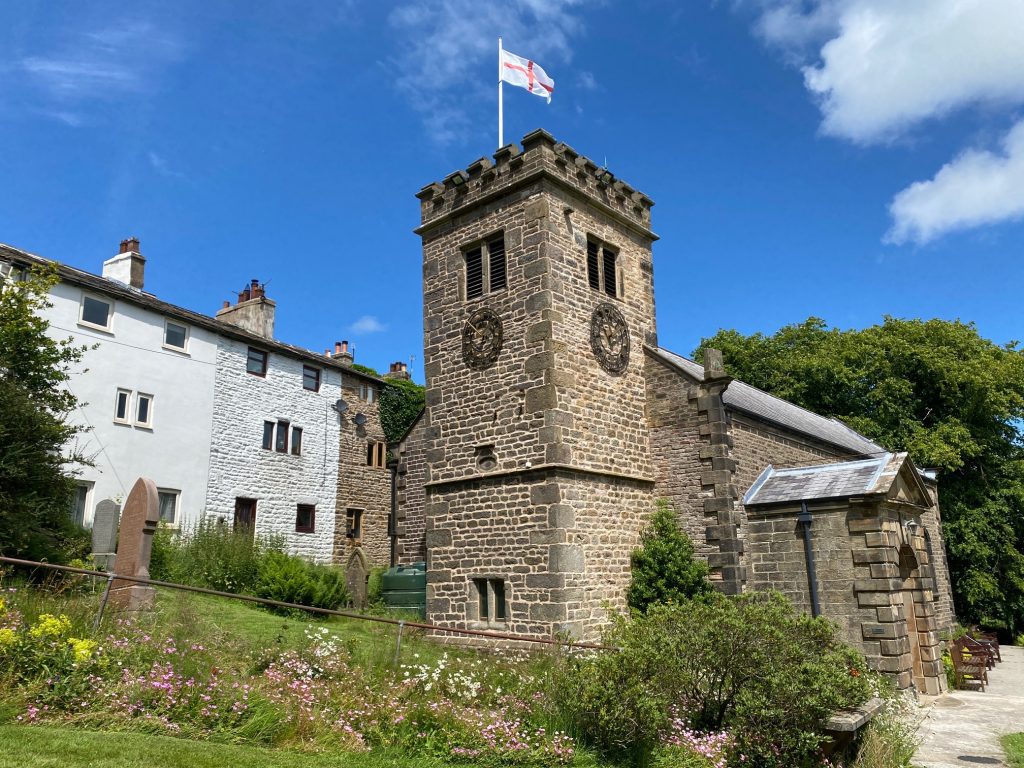 At this point we link up with the Central Loop of the Lancashire Way if you are walking the two Loops in one continuous walk!! We also now LEAVE THE PENDLE WAY for a short while. The Pendle Way now makes its way across and up to Pendle Hill before dropping down into Barley, and then onto Roughlee. We miss Pendle Hill on the Eastern Loop as we climb this on the Central Loop. 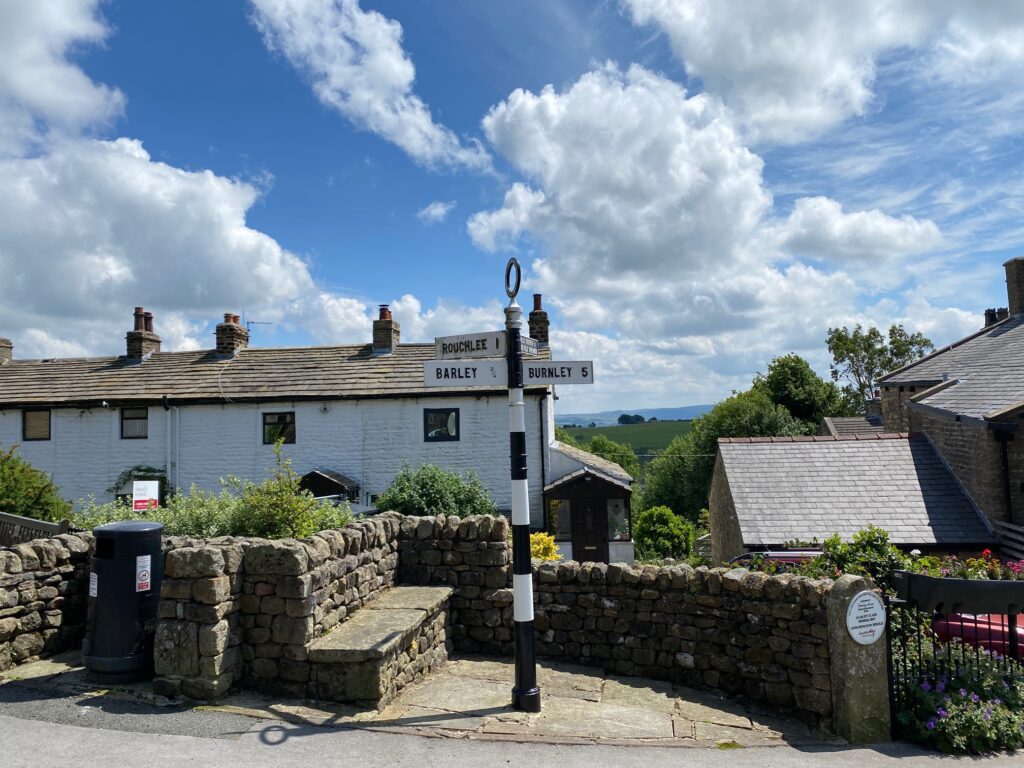 Turn right down the lane in the direction of Roughlee and just after the last of the properties in the village take the footpath on the left across the field and into the wood. The path splits. Bear right and follow this down and then behind an overgrown property to exit the wood a little further on via a narrow stone stile. Continue in the same direction through one stone gated stile and then another shortly afterwards. After this stile bear left and head down the field to a stone stile on the left hand side of a wall. Pass over and turn immediately left following the boundary in a field behind the property called Thorny Bank. Take the next stile into another field and then bear right and head to the gate in the top left hand corner of the field. This takes you into the grounds of Clarion House. 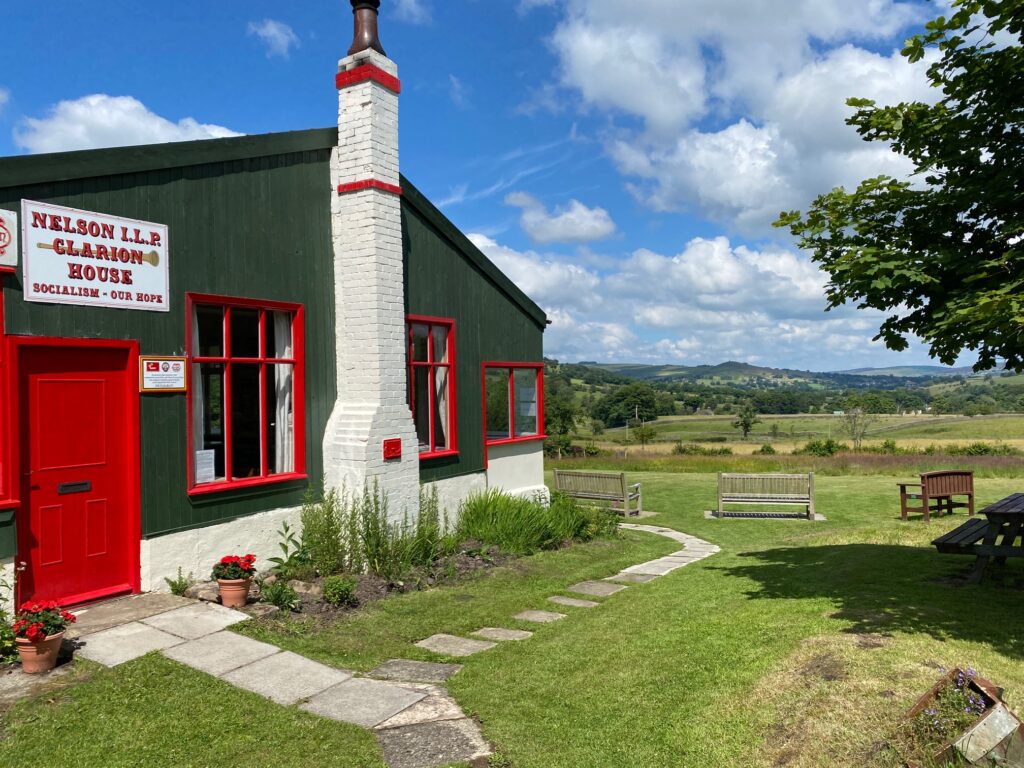 The Nelson Clarion House is the last remaining club house of its type. It was built on behalf of the Nelson Independent Labour Party in 1912 and part funded by the Nelson Weavers Association. There were once many across England and Scotland and their purpose was to provide rural accommodation and refreshments for visitors from the nearby mill towns, thereby encouraging access to the countryside for the working man and woman. It is now open only on Sundays but is often busy with cyclists and walkers dropping in for a very inexpensive mug of tea or just to eat their lunch.

From the benches in the grounds you will be able to see a folly tower on a hill to the north. Overlooking the village of Blacko is Stansfield Tower (also known as Blacko Tower), which was built around 1890. A local grocer, Jonathan Stansfield, built this circular rough stone tower, 30ft in height, to provide himself with a view over Ribblesdale from the top, but the height fell somewhat short. He consoled himself that he didn’t really mind since he had enjoyed building it. Blacko’s most famous son is Jimmy Clitheroe, the 4ft 3in music hall entertainer at one time familiar to everybody and immortalised by his catchphrase “some mothers do ‘ave ‘em” now not used so often.

Exit the grounds to the road and turn left. Follow the road to the junction.

Turn right and then immediately left i.e. go straight ahead at the slightly offset cross roads. Follow the road through the pretty village of Roughlee, which runs along the side of Pendle Water.

Look out for some lovely original buildings including the primary school and the Bay Horse Inn. Perhaps the highlight of the village is the very moving statue of Alice Nutter, one of so called Pendle Witches, who came from Roughlee. She was unusual amongst the accused as she was relatively wealthy, being the wife of a yeoman farmer. She pleaded not guilty but was hanged in Lancaster Castle, with nine others, in August 1612. 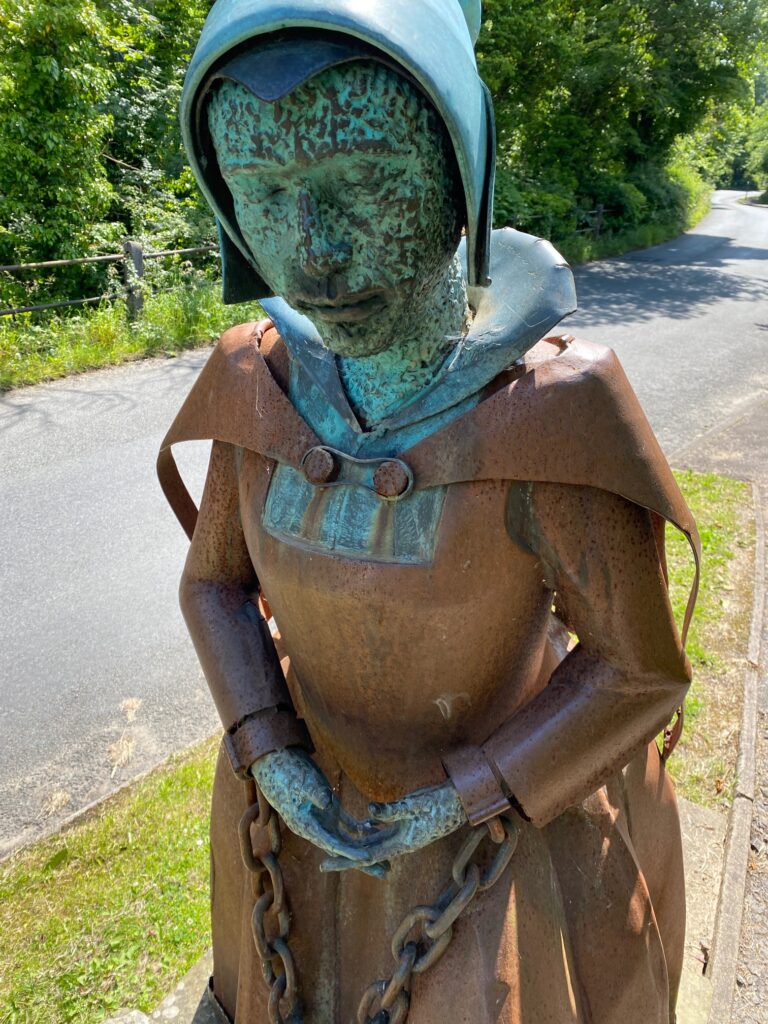 The statue of Alice Nutter in Roughlee

Beyond the pub and set back a little from the road on the left is the Old Hall. About 75m further on just opposite a lane on your left, is a footpath sign and stone stile on your right. At this point we REJOIN THE PENDLE WAY.

Cross over the stile and head down to the river and cross this using the stepping stones. Then bear left up the slope and then straight on at a Pendle Way signpost up over the hill between two large trees to another way marker and then on to a stone gated wall stile. There are excellent views here across the valley to Lad Lowe in the distance (the highest point on the Eastern Loop) and Colne and Barrowford at the bottom of the valley. To the north you can see Blacko Tower again, which is now even closer. 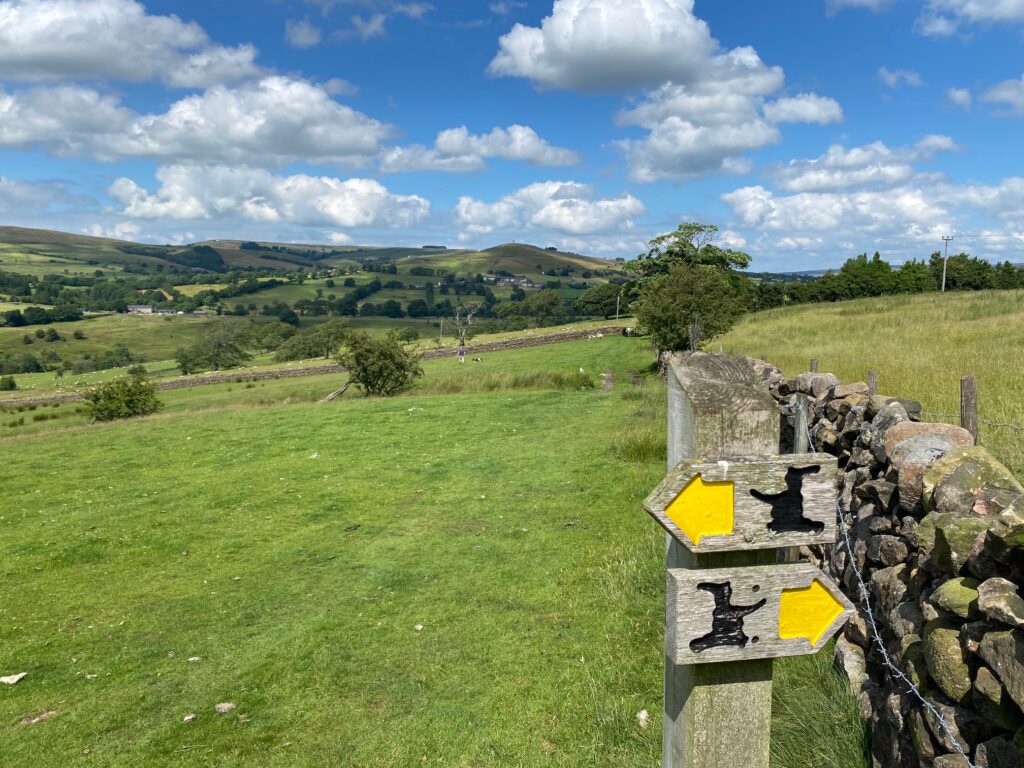 Carry straight on and down the hill to a disused property. Pass through a stile and then pass to the left of the main building and take the gated stile out into a field. Turn left to cross on to the other side of a line of trees and then follow the remains of this boundary of trees, which is in the same direction as we were previously travelling. Cross a footbridge at the bottom of the field and then turn immediately left and use the gated stile to exit on to a road. Turn right and follow the road downhill to the junction with another road. Turn left and head downhill past houses, which mark the beginning of the town of Barrowford. Continue to the main road with the White Bear Pub on your right.

Cross the main road and cross the river into Barrowford Memorial Park. Turn left and follow the river upstream until you enter the grounds of the Pendle Heritage Centre. 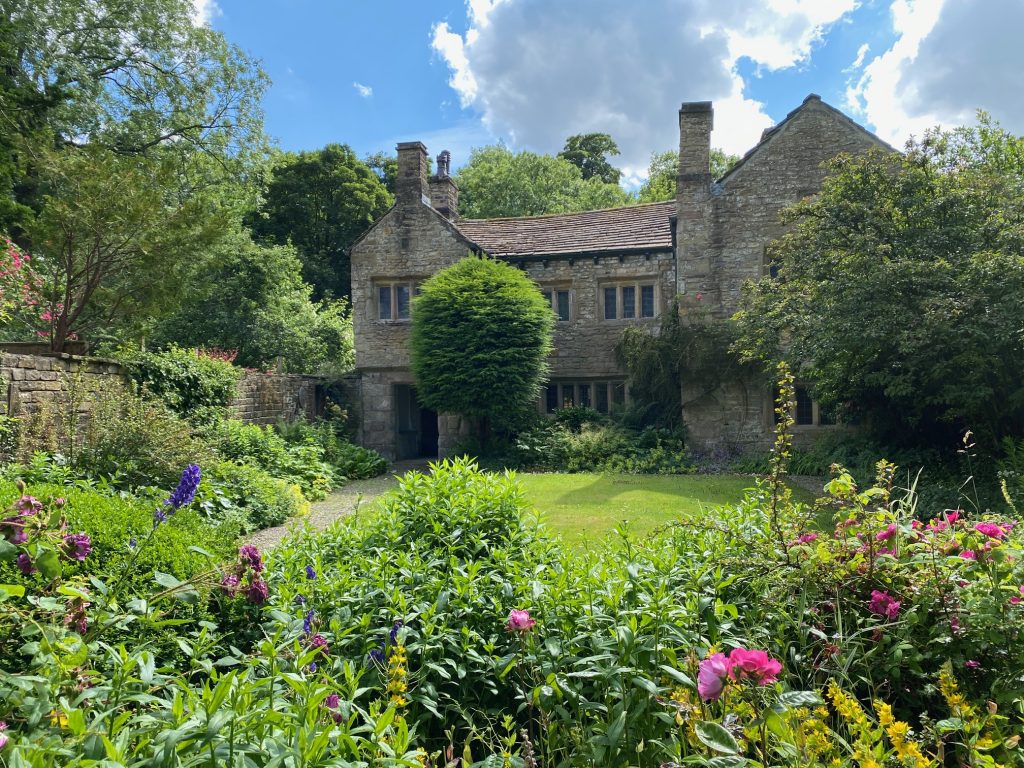 This period house was built by the Bannister family whose best known descendant was the four-minute mile king Roger Bannister. The Bannister family  go back to the Norman Invasion and also once occupied bank hall near Bretherton on the Southern Loop of the Lancashire Way. It includes a café, shop, toilets and well displayed information on the history of the house and a whole floor on the story of the Pendle Witches who met their sad fate on the gallows in Lancaster in 1612.

One characteristic of this area is the running streams and rivers which provided power for the spinning and weaving mills that came with the Industrial Revolution. Barrowford straddles one such river called Pendle Water which along with Blacko Water and others feeds into the River Colne. These are all ‘waters’ and not rivers, perhaps appropriately distinguishing them for their narrow swift running, shallow nature, controlled in places by weirs and sluices of which some old examples remain. 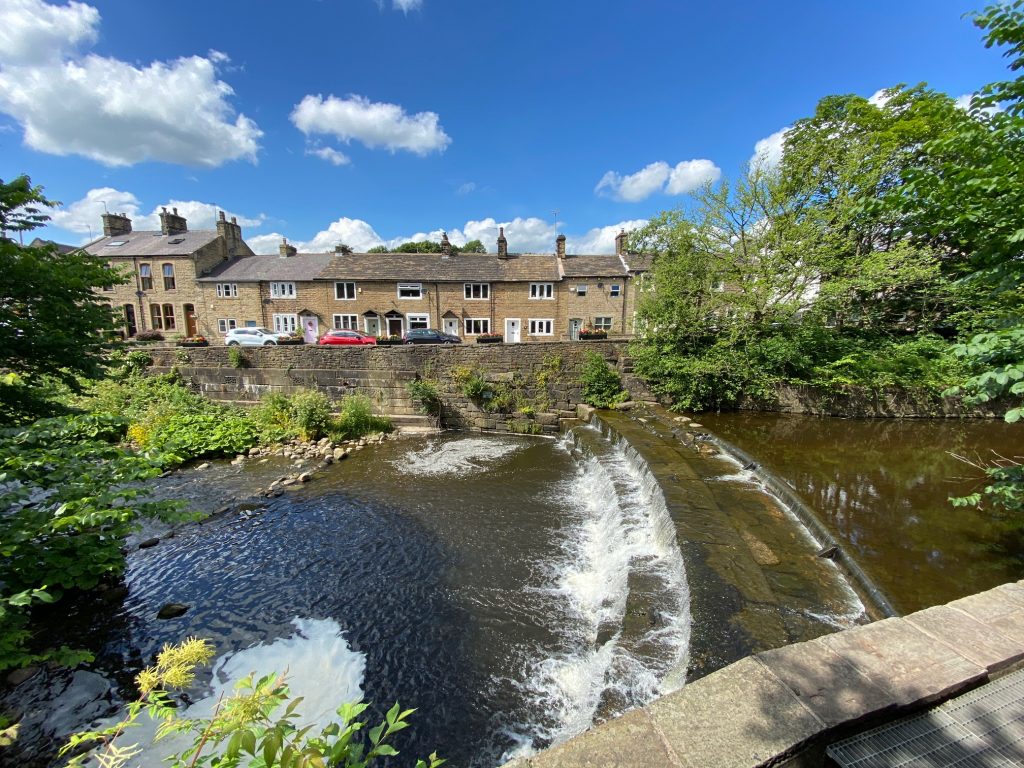