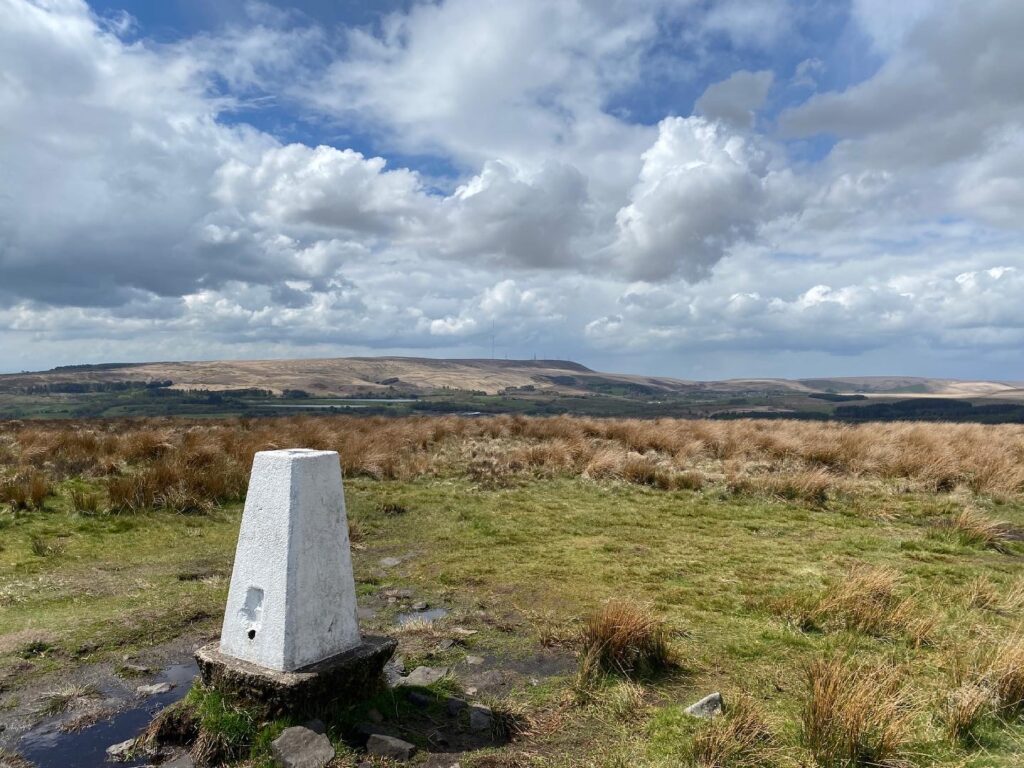 The trig point on Cheetham Close

This stage is almost a walk in itself, almost starting and ending at the same point. But it is a lovely diversion taking in some great history and scenery before the final push back to Burnley, which is now only 20 miles away.

Map of Stage 43 – Unfortunately OS maps of the Eastern Loop are not provided. However, if you e mail lancashireway@aol.com and a full GPX file of the Eastern Loop will be sent to you and this can be down loaded on to OS maps at www.osmaps.ordnancesurvey.co.uk. As an alternative you can view the interactive Map of the Stage below oand/or download the GPX file for this Stage only by following the instructions below.

Cheetham Close is only 329m high but has great views west to Winter Hill, east back to Holcome Hill on Stage 53 and south to Manchester and beyond.

The Jumbles Reservoir is the second of three reservoirs that we visit on this Stage, all of which provide water for the nearby town of Bolton.

The Wader is short distance off the Lancashire Way.

Turton Towers has a long and varied history with many famous occupants including Humphrey Chetham, who founded the famous music school in Manchester.

From the double mini roundabout in Edgworth, return up the road and take the lane on left called Crown Point – the second footpath sign. Follow what almost appears like a private road into a ginnel which brings you out on to a road. Cross over then turn right and then almost immediately left. Follow the track past some houses and then down past the cricket pitch on your left. Exit on to a field. Go straight ahead up the slope for good views of the Wayoh reservoir. Also note the railway viaduct, which we will pass under later on this stage.

Turn left and follow the path to main track/path around the reservoir. Go through a gap in wall into an area with trees and then follow the path directly above the reservoir with good view of dam. Descend to the road using the steps and then carry straight on up a track. Pass through two stile gates into the Black Bull pub car park. Carry straight on to the road. Turn right and head down the hill. At bottom, just after emergency barriers on left, look out for Birches Rd. Turn left and take the right hand cobbled road. Turn right after a row of cottages and a single house. Pass Black Rock Orchard community space on your left and then cross over the 17th century pack horse bridge which crosses Bradshaw Brook. Turn left and carry straight on along another cobbled road.

You will not a lot of new houses in this area, which have been built on land previously occupied by industry.

Cotton mills, printworks, bleachworks, an iron foundry, and a paper mill were important industries in this part of Turton after the Industrial Revolution. The Black Rock Mill complex, a site owned by Whitecroft Limited (previously the Bleachers’ Association Limited), was last operated in the 1950s as a bleach and print works. Horrobin Mill Bleachworks, one of the oldest bleachworks in the Bolton area, ceased trading in 1937 after 150 years activity.

Cross a bridge over a stream and turn immediately right. Follow the flagged path past houses and the continue along the side of the stream which runs through the woods. Yow will then come to the start of the Jumbles Reservoir with a quarry face on the opposite side and an information board on its geology. 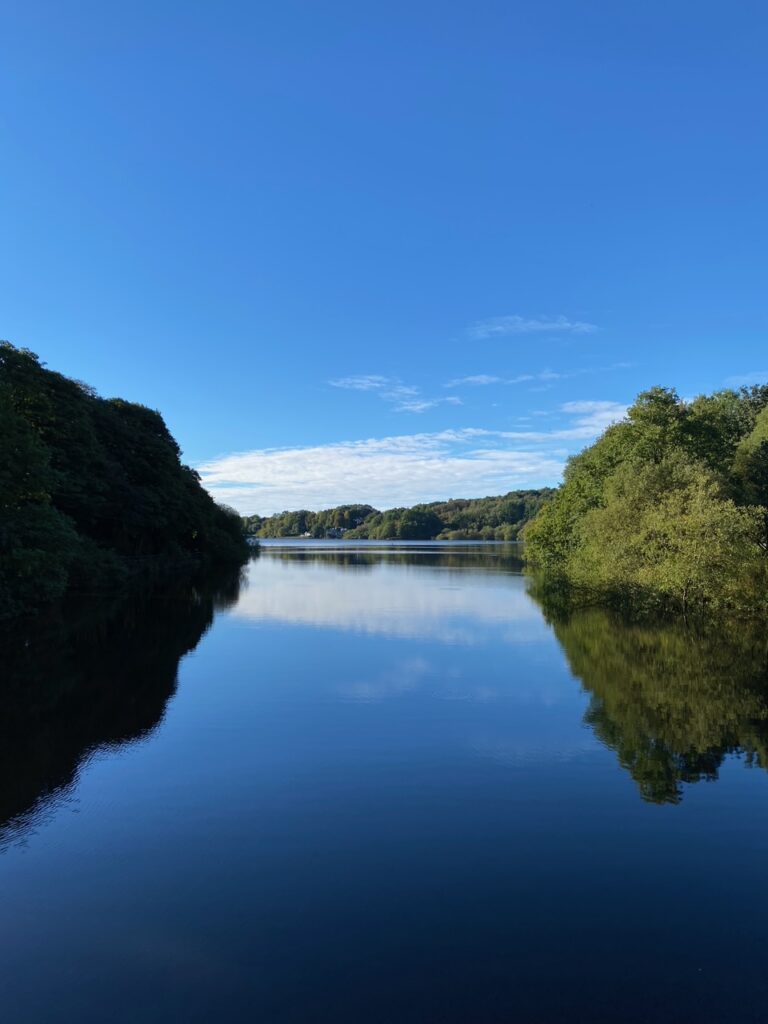 Turn right and cross over the water to the other side using the large modern concrete bridge. Carry straight on up a slope using the wooden steps and through a small wood. Exit using the broken gate carry straight on along the path up the slope, past a pond and on to the road. Turn left.

After 200m turn right into the drive serving Turton Tower. 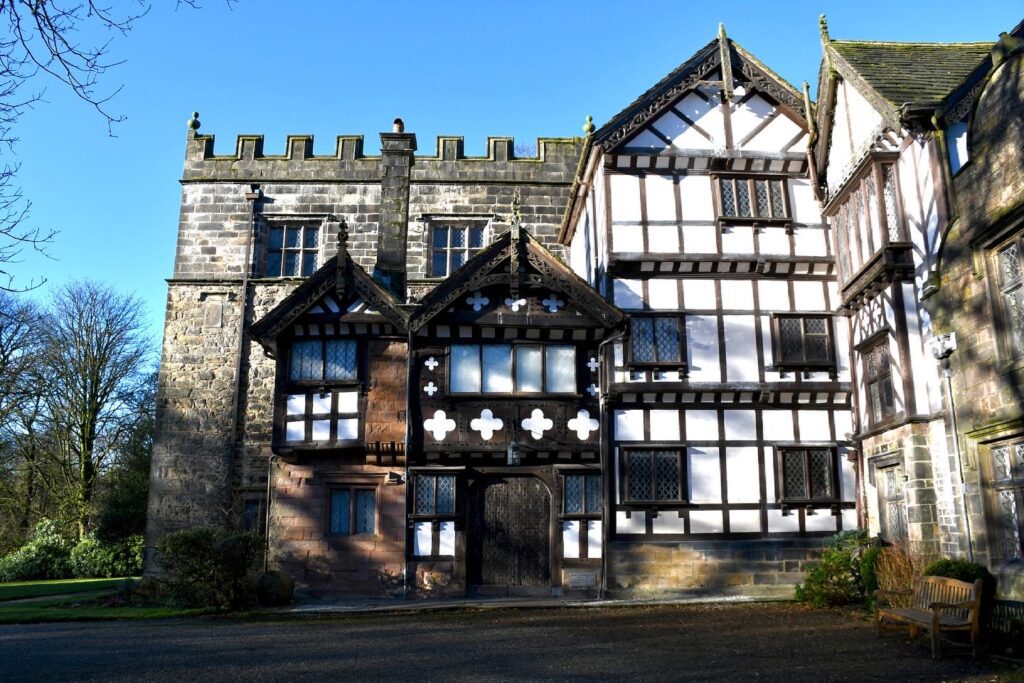 Turton Tower was inherited in 1420 by the Orrell family. The pele tower was rebuilt in 1420 and around 1596 the height was increased and the floors raised, creating the three spacious rooms. In the sixteenth and seventeenth centuries the timbered farmhouse buildings on the east and north of the Tower and the Entrance Hall were added. In 1628 the Orrells sold Turton Tower to Humphrey Chetham, the Manchester merchant responsible for the creation of Chetham’s Library and Chetham’s School of Music. The Tower passed to his descendants, the Bland, Green and Frere families who leased it to a succession of tenant farmers.

The tower was sold in 1835 to James Kay (1774–1857), who had harnessed steam power and developed the first commercially successful wet-spinning process for flax in 1825. Kay restored the tower and few rooms in the main part of the Tower escaped his attention, but his valuable work was marred by his inability to resist the temptation to ‘restore’ what has never been there in the first place. James Kay sold the tower to Elizabeth and Anne Appleton who leased the tower to William Rigg, a calico manufacturer, whose daughter, Ellen, wrote her memories of Turton now published as “Victorian Children at Turton Tower”.

In October 1903, the tower was bought by Sir Lees Knowles, 1st Baronet MP for Salford West for £3,875. He made his fortune from his family’s collieries on the Manchester Coalfield. After his death in 1929, his widow, Lady Nina Knowles, presented Turton Tower to Turton Urban District Council in 1930, and it became the council chamber.

Carry straight on past the car park entrance and gates to the garden and up to a bridge over railway. Note the ornate structure of the bridge which was dictated by the then owner of Turton Tower in 1848, James Kay, who insisted that it be in keeping with the rest of the estate.

Bear right up the slope. When the track turns sharp left over a cattlegrid turn right, through the gate. (Witton Weavers way sign on stile gate) and follow the track north. After 200m take the stile on the left and follow path up the hill along boundary fence.

We will now pass through four stiles in fairly quick succession. Go straight through the first gate stile and on to a second by the side of a barn. Enter into a wood via the third gate stile and then exit the small wood by the  4th ordinary stile. Follow the good path to top of hill. Pass through a gate stile and turn right and follow another good path north to the trig point at summit. We are now on Cheetham Close/Turton Heights with good views in all directions. We are now at our most southern and westerly point on the Eastern Loop and to the west is Winter Hill, which is highest point on the Southern Loop of the Lancashire Way. There are good views also to the south with the Manchester skyline often visible and of course Peel Tower to the east. 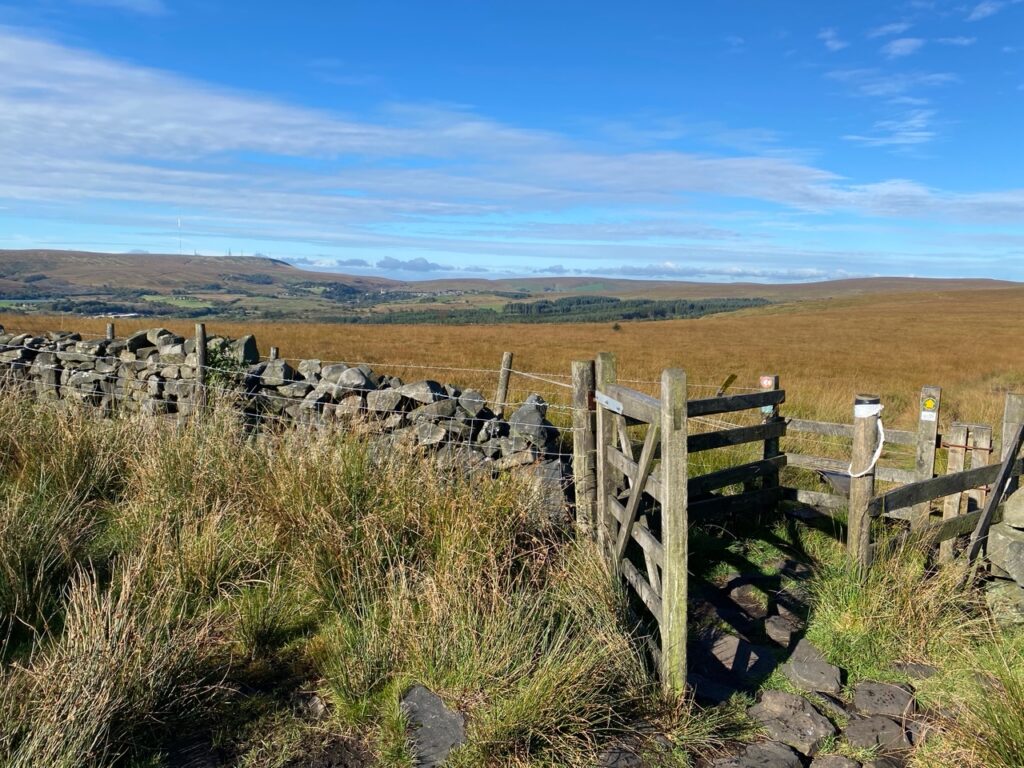 On Turton Heights with the view across to Winter Hill

Carry straight on down the slope to a double stile. Then straight on to a cross roads of paths with a distinctive cast iron marker post marked by the words “Bolton Corporation” – I think! Turn left and follow the path down the slope. When the path splits into three – ignore the left turn path and bear left down the hill. Also ignore the indistinct path that heads straight on. Follow the path across to a wall and a stile in the corner of two walls. Then follow the path with some duckboards to left of a lone tree by a small hillock to a marker post. Turn left and head down towards a wood and stile. Cross the stile and then make your way along the side of wood . Then cross over another stile on to a track and then the road.

Turn right along the road. After 75m turn left, through the stile gate and take the path across the field to another stile gate. There are good views here of the next stage with the Broadhead valley and the small hill of Hog Lowe Pike on the horizon. Cross the road and take path opposite. You will then come to the edge of a car park. Turn right and follow the path for 20m and then turn left down some steps to a road, car park and the Entwistle and Turton reservoir. 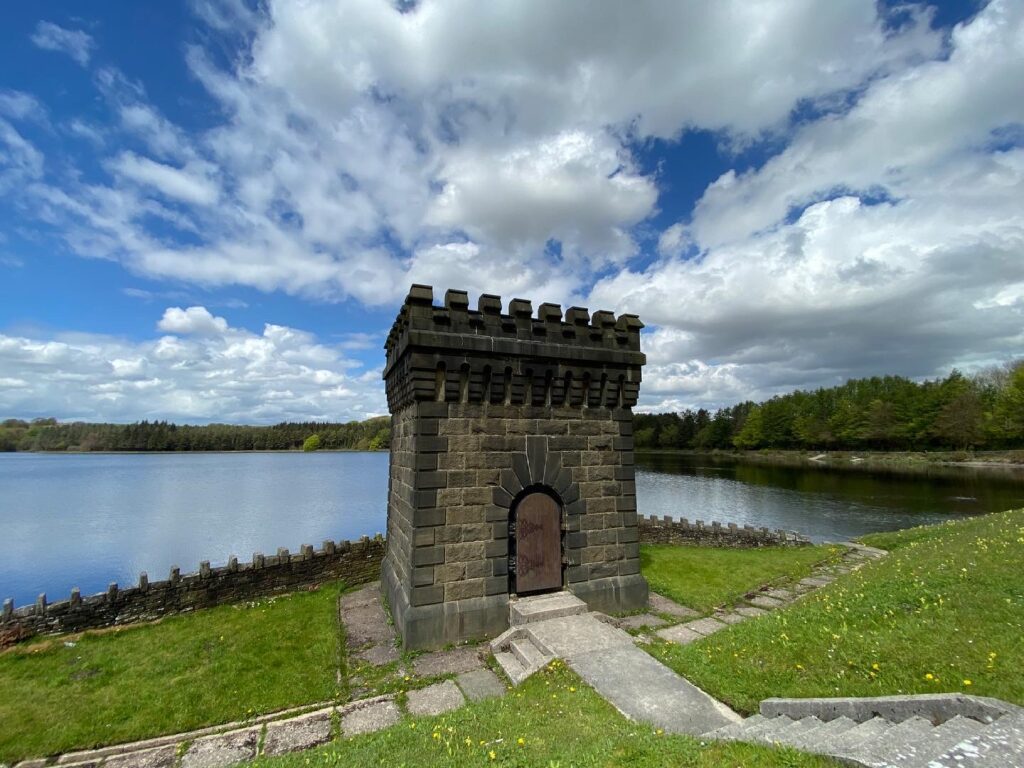 The Entwistle Reservoir – our third of the Stage

This is the third reservoir that we have now visited, all of which serve Bolton, although they are now in the Borough of Blackburn with Darwen. The Entwistle reservoir dates back to 1832, when its dam at 108ft, was the highest in Britain. Its original purpose was to regulate the flow of water in Bradshaw Brook, which provided power for the various mills that were situated in the valley below. The present overflow channel and valve tower were added in 1884 by Bolton Corporation Water Works.

You have an option here to add an extra 2.5 miles to the Stage by walking around the reservoir which will include the sculpture called the Wader, which sits in the water. Made of steel in the shape of a heron, it sits patiently waiting for its prey! It was commissioned by United Utilities and the artist is Marjan Wouda. If you have far to go then please do at least venture across the dam to get the best view up the valley including the valve tower. 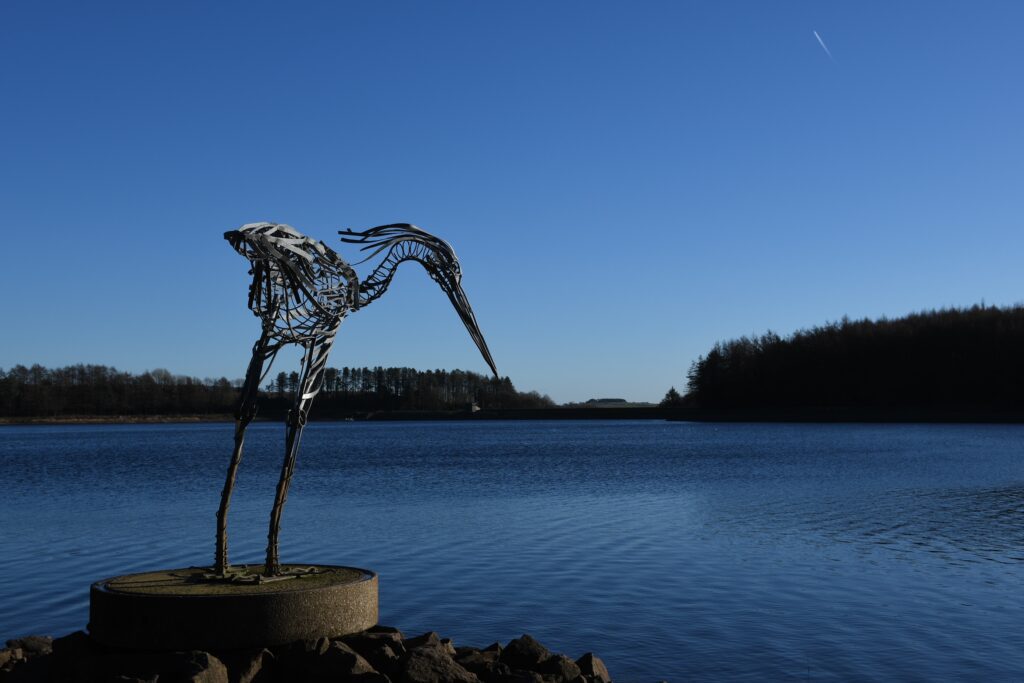 The “Wader” just off the Lancashire Way – why not make a detour if you have time?

The route now makes its way to Entwistle Railway Station but of course not the direct route as we will take one last look at the Wayoh Reservoir! From the road enter the car park on your right and head to the back of it and pick up a Concessionary Footpath. This takes you down the valley below the dam through pretty woods. We then pass under the Bradshaw Brook railway Viaduct, which was built in 1848 and carried the Blackburn, Darwen and Bolton Railway over Bradshaw Brook. It is 37m high, with nine arches having spans of 15m. 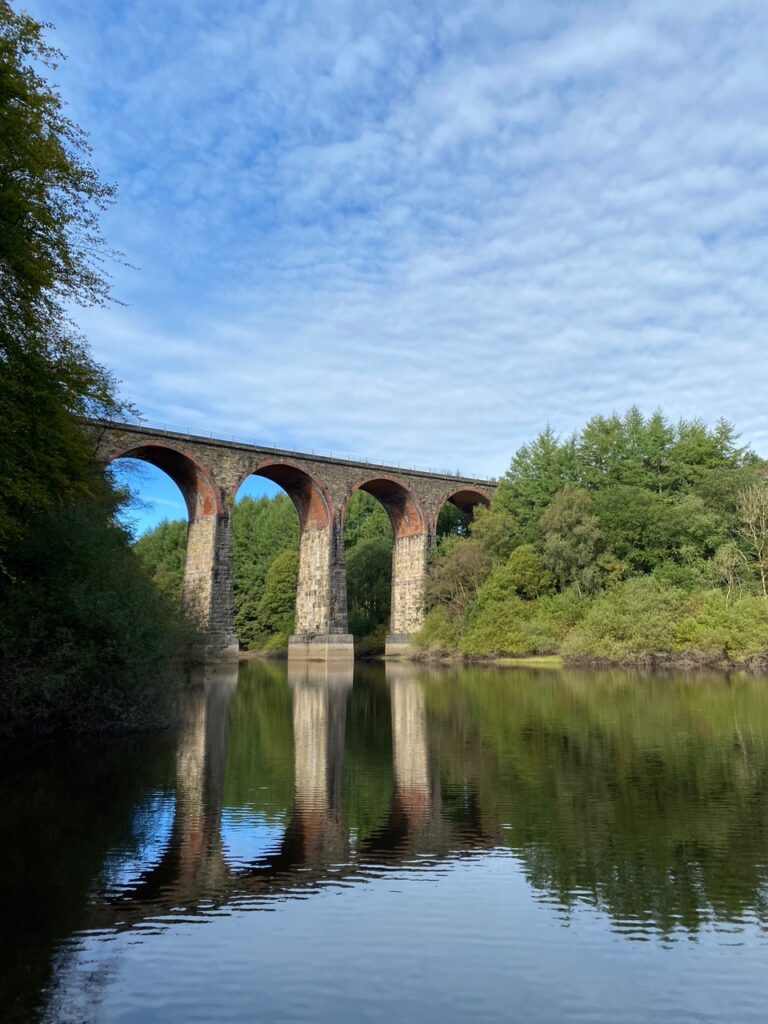 The viaduct over Bradshaw Brook and the Wayoh Reservoir

Continue down to the reservoir and then turn left and cross the causeway over to the other side of the water. Continue along the path around the bank of the reservoir to a road. Turn left and follow the road up to the railway bridge and the Station.

The Stage deliberately ends here so that you can use the train to find accommodation probably in Bolton – there is a Holiday Inn not far from the station in the centre of Bolton. Blackburn to the north is also a possibility but may require a taxi as well.

If you are continuing straight on to Stage 56 then consider refreshments at the Strawberry Duck pub, which is just around the corner from the railway bridge.

Walk the Stage and then just before the climb up to Entwistle railway station turn right and use the road to cross the Wayoh reservoir and then up to the main road. Turn right and follow the road back into Edgworth.

Use this form to find things you need on this site