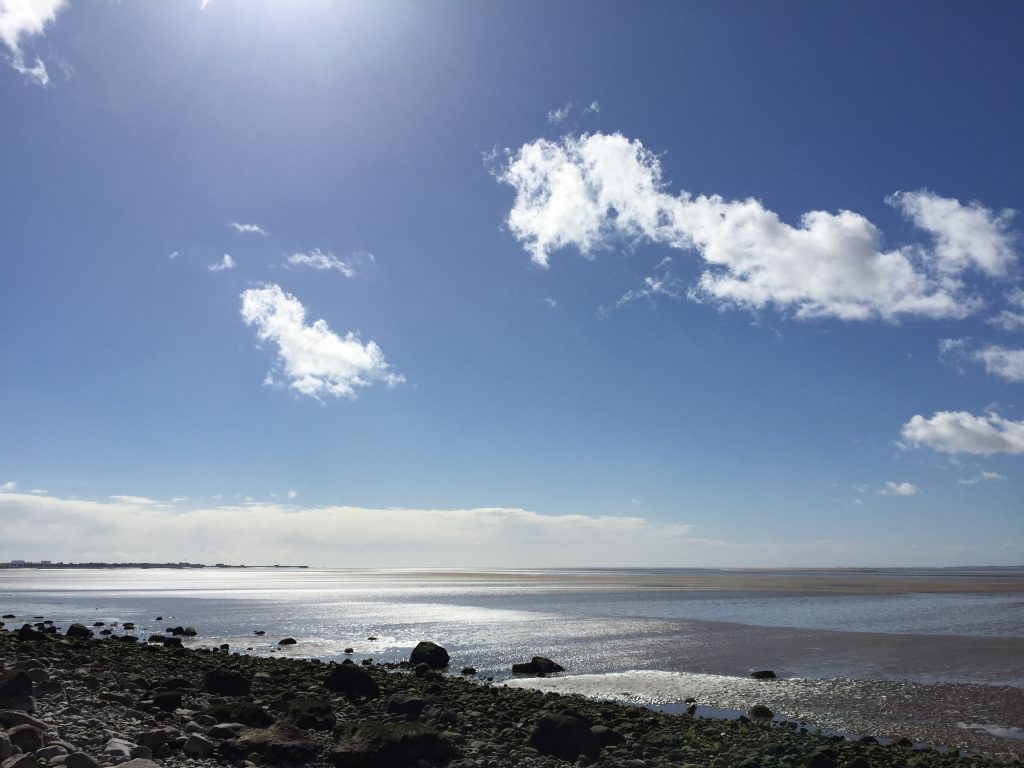 Great views across Morecambe Bay as we follow the Lancashire Coastal Way all into the town with its name. This seaside resort is full of surprises with a very modern front, some great architecture, especially of the Art Deco style, and unparalleled views across to the Lake District.

A map of Stage 41 can be found below courtesy of Ordnance Survey maps. You can subscribe yourself using this link, https://osmaps.ordnancesurvey.co.uk, which will enable you to import the GPX file which can be downloaded below.

From the Church continue along Main Street down the hill, around the bend and then out of the centre of the village. There are some old properties initially, some dating from the 17th century, but then the more recent expansion of the village can be seen. After a section of road with no footpath, the main road bends around to the left but please cross the road and continue along Sand Lane, which bears off to the right.

After a few hundred meters the road bends through ninety degrees right but please carry straight on past the house on your right and then over the railway – the west Coast mainline again. If you look down the tracks to the SE you will see what were once extensive sidings – Carnforth was a major railway hub in its time! It is perhaps most famous for that scene in David Lean’s 1945 film “Brief Encounter”, when Celia Johnson and Trevor Howard parted in the Refreshment Room accompanied by piano music from Rachmaninoff. The Station was renovated and reopened as a Heritage Centre in 2003.

Immediately after crossing the railway turn left and continue parallel to the railway. At the end of this lane cross over the River Keer (do you remember Rennie’s aquaduct near Capernwray?) on to Shore Road. Turn right and follow the road for about half a mile. Just after an S bend in the road and just before the road turns left and heads back in land look out for the fence with a stile on your right and use this to access the river bank which follows the River Keer into Morecambe bay. 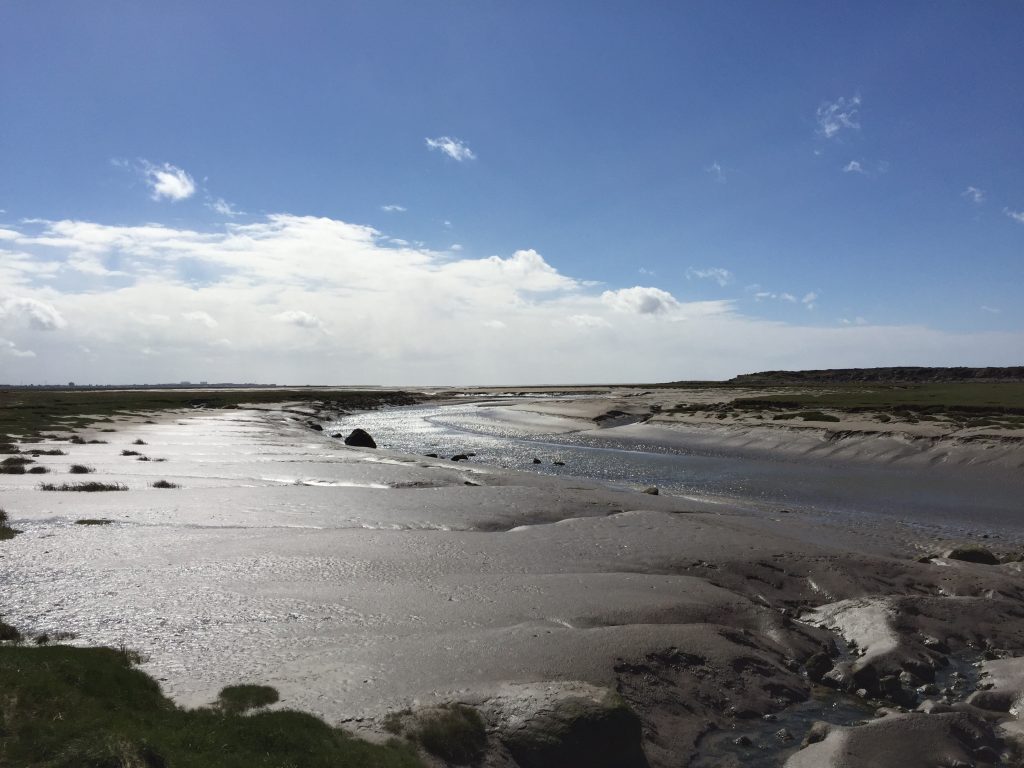 The directions for the remainder of the Stage are straight forward – continue along the shoreline until you reach the main A5105 road into Morecambe.

The only exception is when you get to Red Bank Farm, when the route heads through the farm buildings and over a small hillock past a trig point with a height of 21m!! However, you can just continue along the shoreline at this point if you wish. 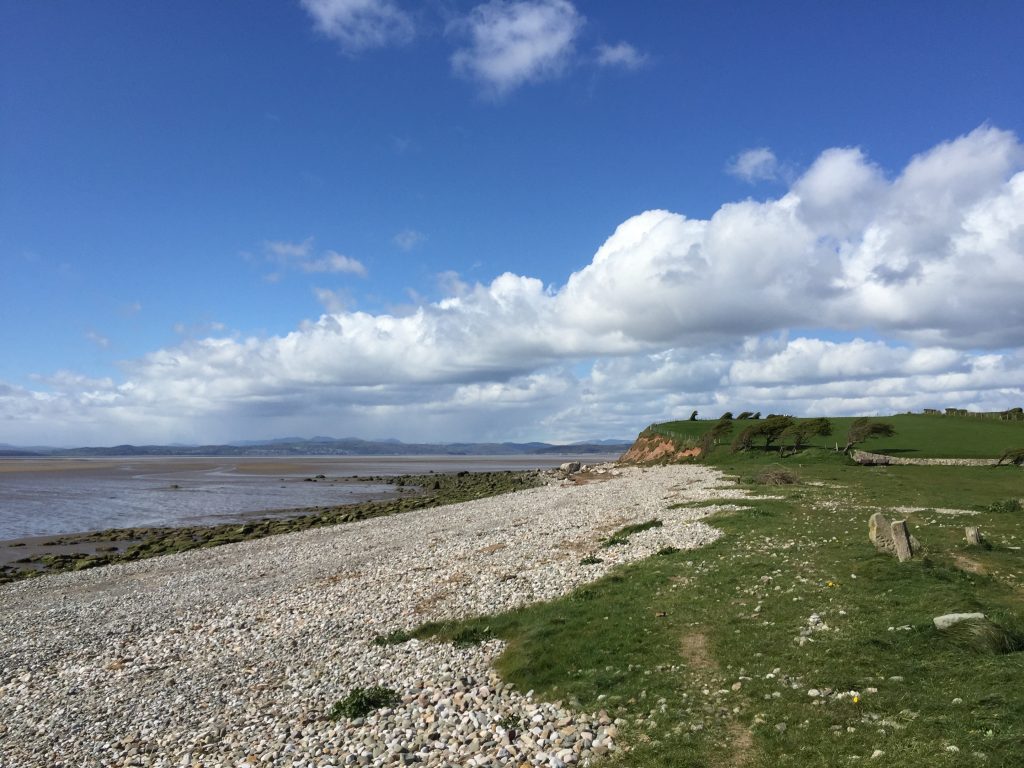 Looking back to the trig point at Red Bank Farm

Shortly after this you come to a gravelled car park with white stones marking its perimeter. Just a little further on, opposite Shorefield caravan park, you can join another road called The Shore, which leads away from this car park and which gives you a temporary respite from walking on the sometimes pebbly beaches. This road, with its parking facing out to sea, leads to a level crossing and pedestrian bridge over the railway. However, keep on this side of the railway and return to the shoreline and continue south. The path then bears right and then you enter the car park of building occupied by a gym. Use the access road to find the main A5105 – Coastal Road opposite Morecambe golf course.

The remaining two and a half miles of the Stage are on the footpath of the main road, which follows the shoreline in a westerly direction to the iconic arc shaped art deco Midland Hotel. In front of the hotel is the Stone Jetty and the Stage ends by the lighthouse at the very end of the jetty with its fabulous views. 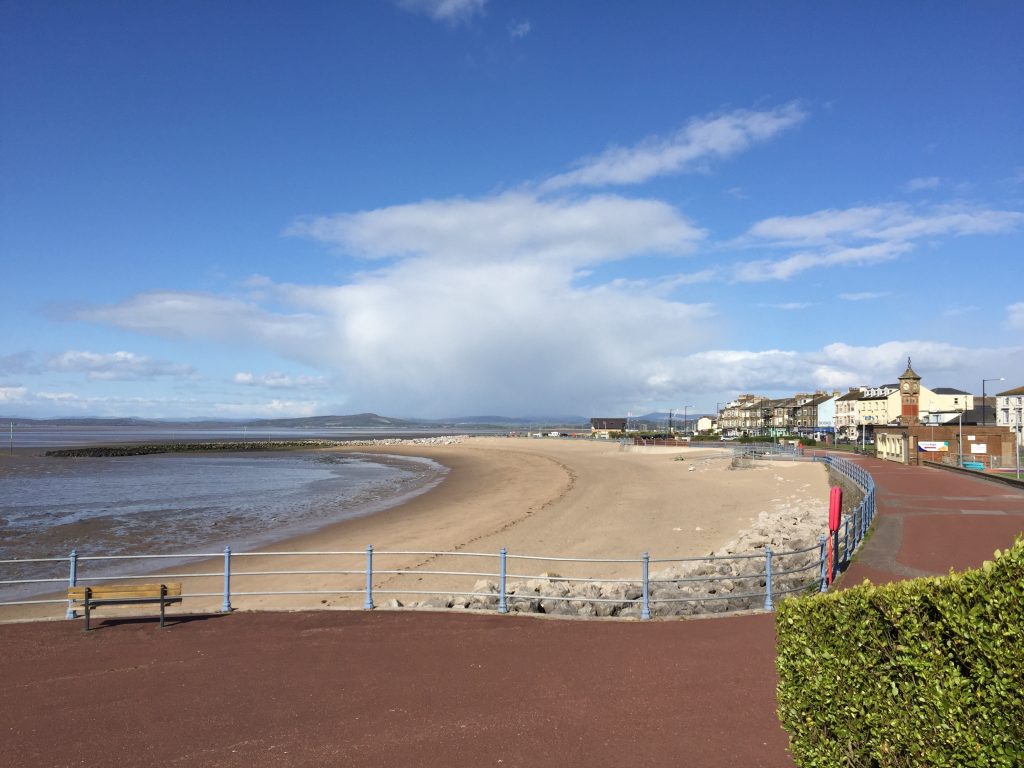 The beach and promenade at Morecambe

But before this do take time to look out for some of the interesting features along the well maintained man made front including the lady and her gymnastic child, the metal freeze of the peaks of the Lake District across the Bay, the clock tower, the futuristic children’s playground and of course the statue of Eric Morecambe and its surrounds. Just before the Midland are gardens with a War Memorial. And if that is not enough then on the landward side are the many hotels, guesthouses, care homes and shops often in grand tall buildings from when Morecambe was in its prime and most with huge windows looking out across the Bay. 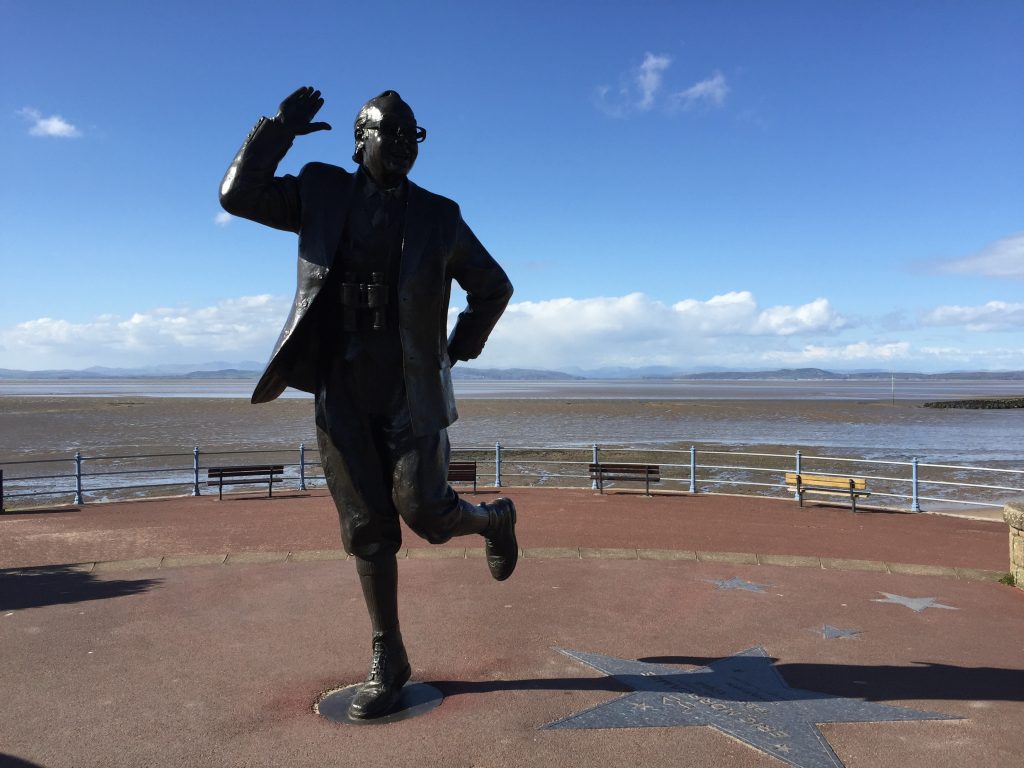 And so finally after many miles of walking over hills and in the countryside we have finally made it to a Lancashire Seaside town and resort. With a large population toiling in the smokey factories of Lancashire’s many industrial towns, its coast was a respite from these conditions particularly during the one week during summer when the whole town would shut down and spend the week by the seaside.

To the south there is Southport and Formby close to Liverpool and now in Merseyside, and then on the Fylde there is Lytham, St Annes, Bispham, Cleveleys and of course the largest of all, Blackpool. To reach these on our exploration of Lancashire would have required a huge detour and I think Morecambe is a real gem and a fine example of the Lancashire seaside town. And, whilst it has its sandy beaches like Blackpool, it also has those wonderful views across its Bay. 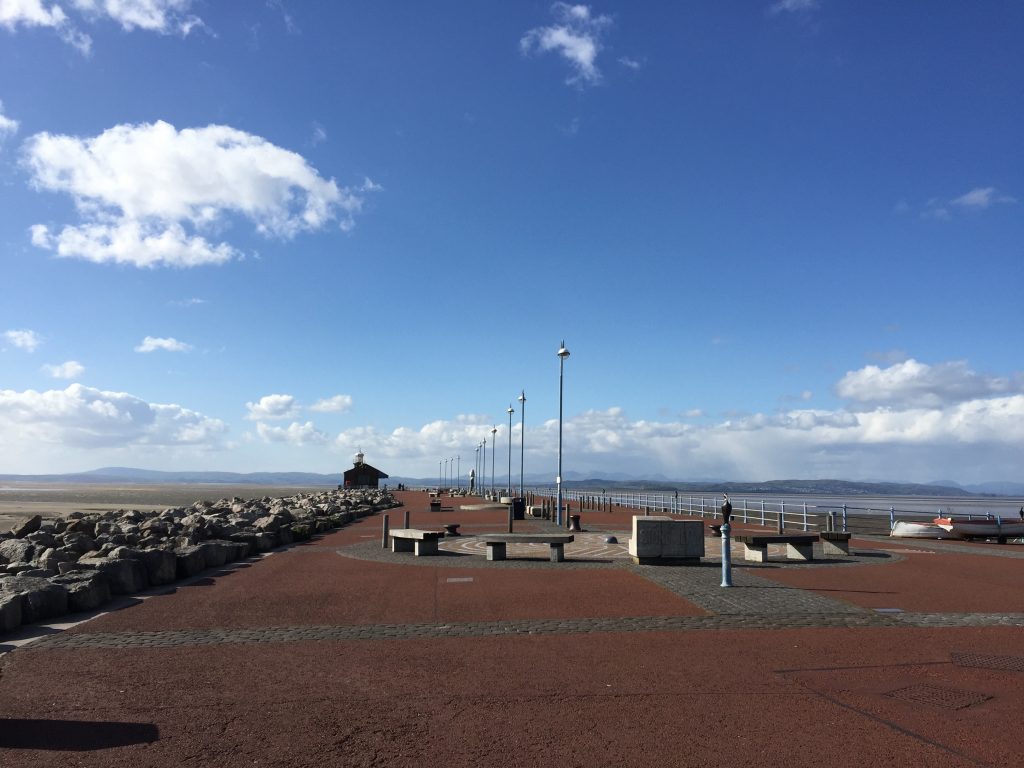 The town with the name of Morecambe only officially dates back to 1889. Prior to that it consisted of three smaller towns including Poulton-le-Sands although the name of the Bay dates back to Roman times. In 1846 the Morecambe Harbour and Railway Company was formed and by 1850 the railway reached Skipton, Keighley and Bradford encouraging the expansion of the port and a seaside resort. These links with Yorkshire meant that visitors were not just from the Lancashire mill towns.

The second half of the 20th Century saw the building of a variety of excellent Victorian buildings including the Winter Gardens and the Park Hotel and others providing refreshments, entertainment and accommodation for its visitors. The Winter Gardens building can be seen on the landward side of the promenade just before the Midland hotel, with its ornate red brickwork and veranda.

After the First World War and Great Depression of the beginning of the 21st Century, and with the advent of workers holiday pay, the town had a renaissance with piers, hotels, lidos, cinemas, shops and houses generally being built in the Art Deco style. Whilst tourism was still buoyant in the 1950s and 1960s, the advent of package holidays to sunnier climates in Europe saw the gradual decline of the town with holiday makers replaced by casual day trippers. This was compounded by the loss of attractions such as the two piers, with one lost to a storm in the late seventies.

However, Morecambe is a proud town and more recently has seen a mini revival. The Midland Hotel was renovated and reopened in 2008 and there has been investment in the town including it sea front promenade.

Famous visitors included Eric Morecambe, who took his stage name from the town, and the Yorkshire playwright and author Alan Bennett. The latter believes he was conceived in a guest house in the town, spent many holiday here with his parents and featured it in some of his works such as the TV Play “Sunset across the Bay”. He also wrote works for, perhaps Morecambe’s most famous daughter, Thora Hird. 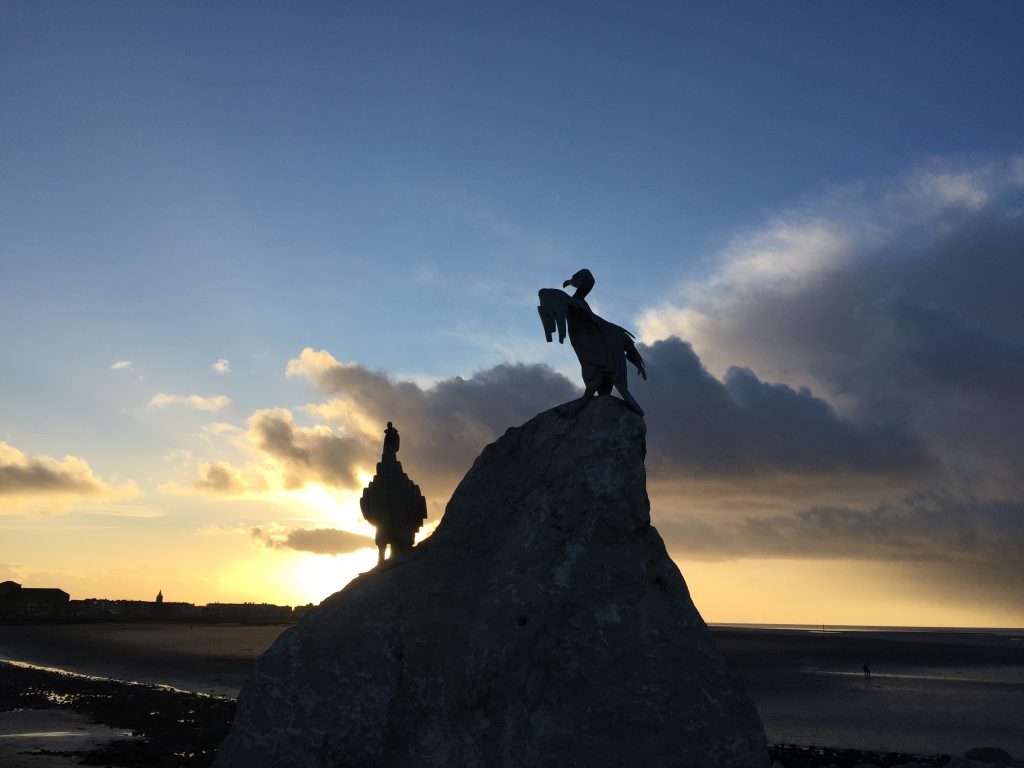 More sculptures on the Stone Jetty

Accommodation – too numerous to mention! Not sure if The Midland takes hiking boots!

This stage is just over 8 miles so any circular walk is going to be around double this. The most satisfactory option is to begin the stage in Carnforth and head down Warton Road and then pick up the Shore Road were you can join the Stage at the footbridge over the River Keer.  Then walk the remainder of the stage to the Stone Jetty in Morecambe and then return back along the Promenade to Hest Bank. It is about 6 miles to the Stone Jetty and back from Hest Bank. Return to Carnforth via the Lancaster Canal, which is about 4 miles. So in total this will be about 15 miles. You could shorten the walk by only going as far as Hest Bank but this missesa the beautiful views of Morecambe and its Bay.

Alternatively use the local bus service from Morecambe to Carnforth to return to the start.