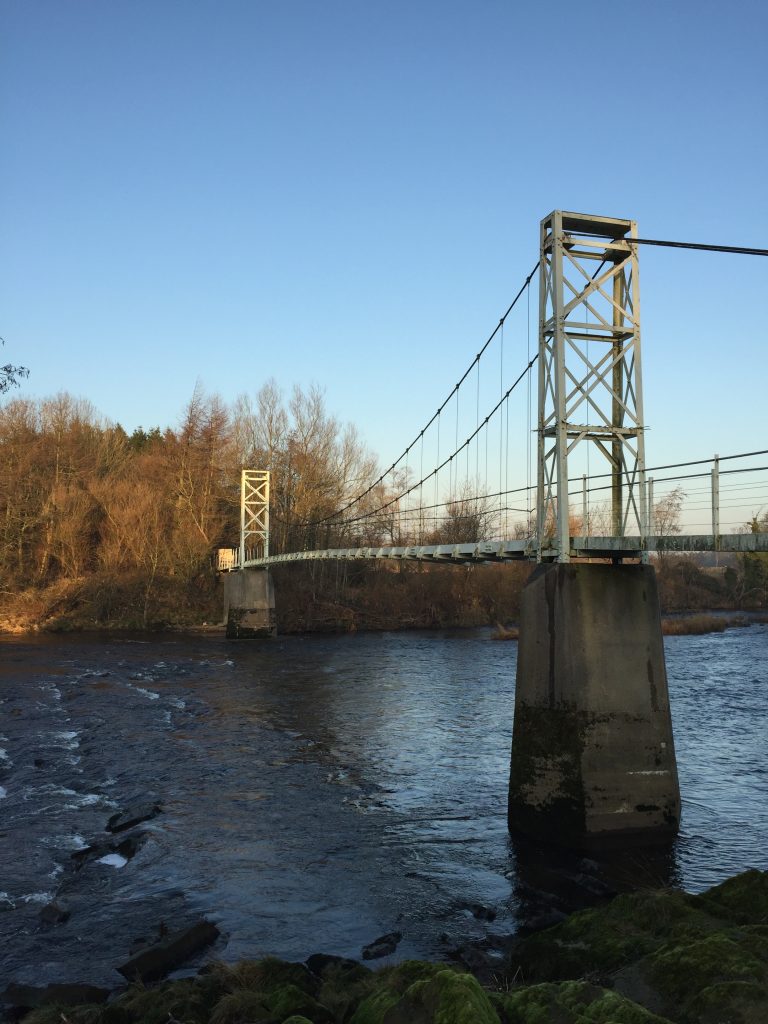 The old pedestrian Suspension bridge at Dinkley over the River Ribble 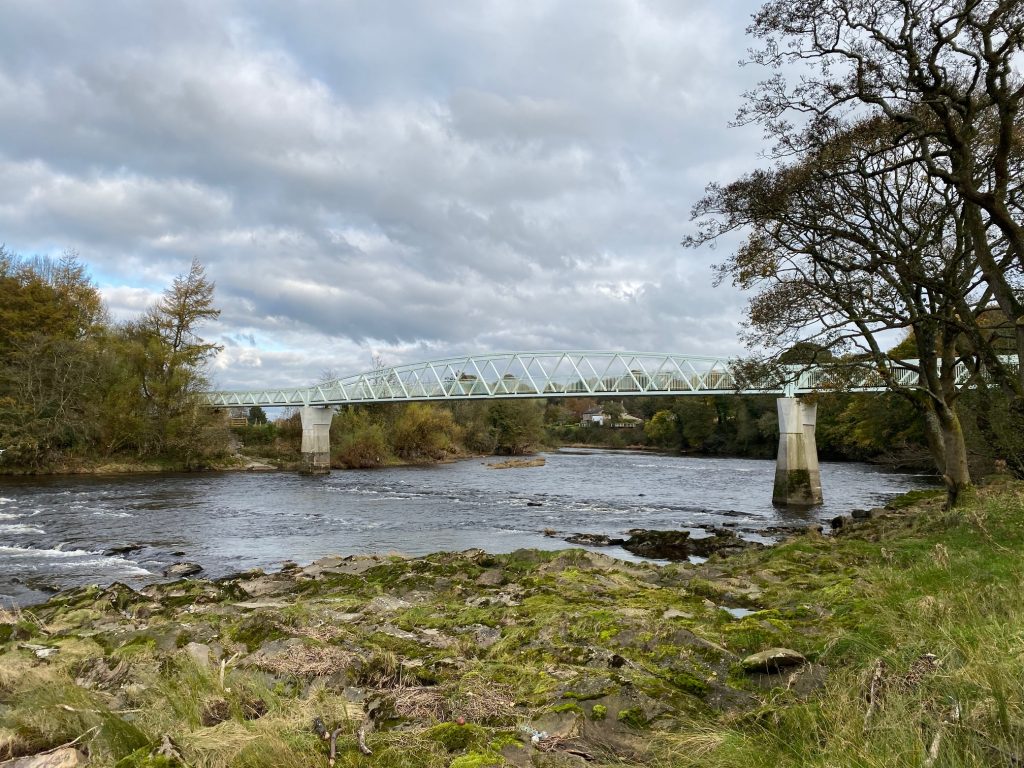 The new bridge (2019) over the Ribble at Dinkley

A short stage and an easy walk with no real gradients or heights to scale although some of the farm land can become extremely saturated and muddy during the wet parts of the year. The village of Hurst Green is a pleasant start to the day but the stage is dominated by the River Ribble, and two crossings of it, before ending in the Roman village of Ribchester and its Roman Museum.

A map of Stage 27 can be found below courtesy of Ordnance Survey maps. You can subscribe yourself using this link, https://osmaps.ordnancesurvey.co.uk, which will enable you to import the GPX file which can be downloaded below.

Before starting this stage it may be worth quickly investigating the pretty village of Hurst Green, which is not too dissimilar to many small villages of the Ribble valley. 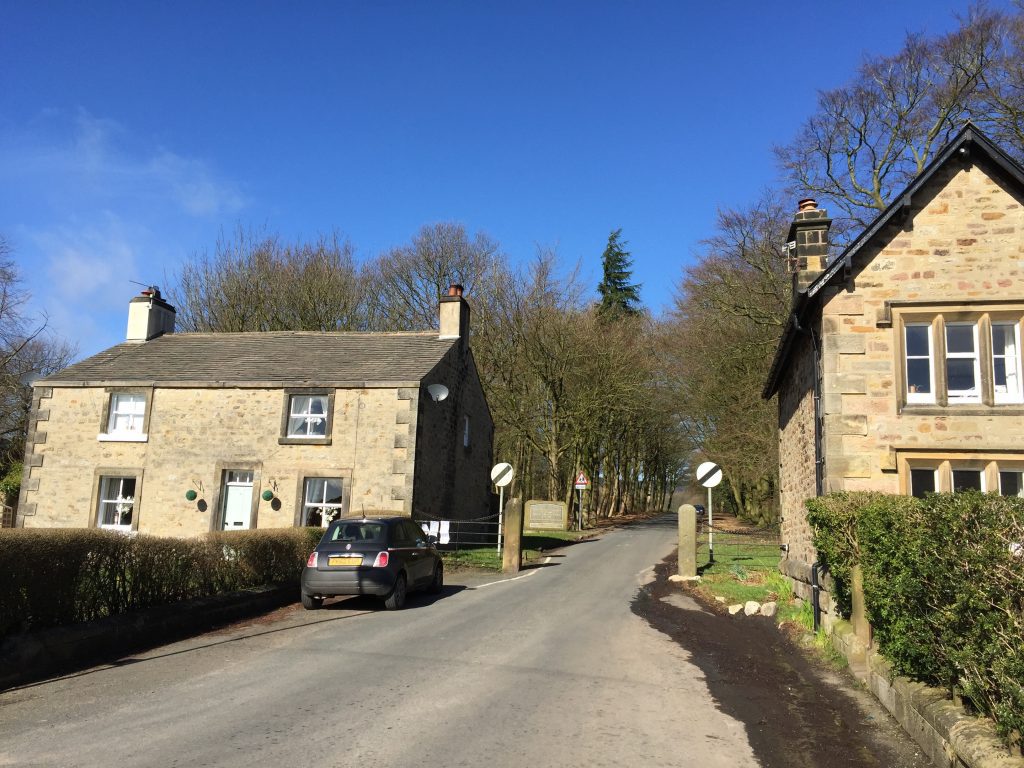 Hurst Green and the entrance to the avenue which leads to Stoneyhurst College.

With the founding of Stoneyhurst Hall by Richard Shireburn in 1592, the hamlet of Hurst Green (about a mile away) began to develop, as often happens with the building of Manor Houses. The hamlet’s development continued and by the early 20th Century, the village was about the size it is now (approximately 500 residents)

There is a distinctive war memorial to World Wars I and II, bearing the names of the soldiers who died from the area. This is situated near the village ‘green’. At the other side of the green stands the prominent St Peter’s Guild club – a catholic social club, which has existed for well over 200 years. Refreshments can be purchased here at the weekend.

Shireburn donated the impressive and distinctive Alms Houses to the village. These Alms Houses were originally based on Longridge Fell but were moved to Avenue Road in 1946 to provide accommodation for the staff at Stoneyhurst. 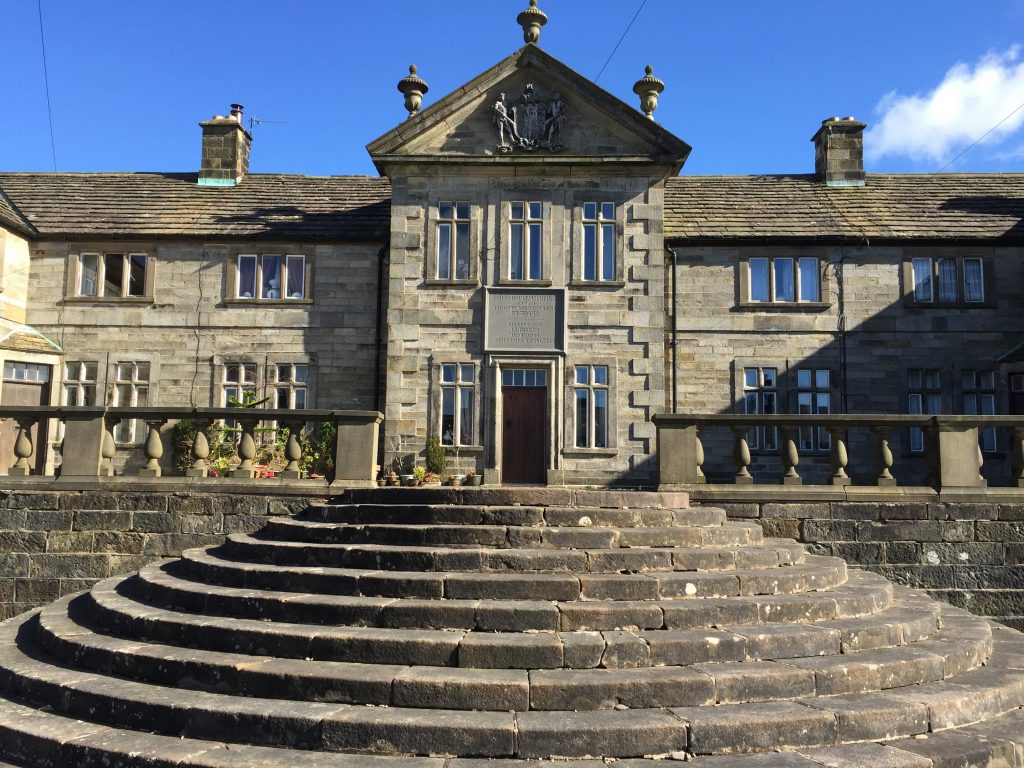 The Alms houses in Hurst Green

The presence of at least two old bobbin mills bear witness to the cottage-industry that was once here. However, this is a community that mainly thrives on farming and tourism – with some people working at the local schools and many more commuting to local towns.

The Stage begins at the War Memorial opposite the Shireburn Arms on the Longridge Road. Turn right and look out for Lambing Clough Lane on the opposite side of the road which runs down by the side of the pub.

Take the lane down to the property called Lambing Clough at which point the road splits. Continue along the stoned track on the right down the hill all the way to the farm buildings associated with Trough House. Pass through these and just beyond the buildings, there is a track to the right, which is the route of the Ribble Way. Originally I was going to follow the Ribble Way from here all the way to Ribchester but after some deliberation I have opted to cross the Ribble not far from here and then follow the banks of the Ribble for about a kilometer, which is one the prettiest stretches of the River. The only draw back is that the second half of the stage follows public roads – initially the quiet Ribchester Road from Salesbury Hall to the Ribchester bridge at which point we meet up again with the Ribble Way when we join the Blackburn Road which takes us directly into the centre of Ribchester.

My route crosses the Ribble via the Dinkley suspension footbridge, which originally dated from 1951 and replaced a previous ferry service. Unfortunately on Boxing Day 2015 floods damaged the bridge and it remained closed for a few years but has now been replaced by a brand new, but not nearly as attractive a bridge. I have included two sets of directions to Ribchester in case the bridge is ever closed again. The official route follows the Southern bank of the Ribble. 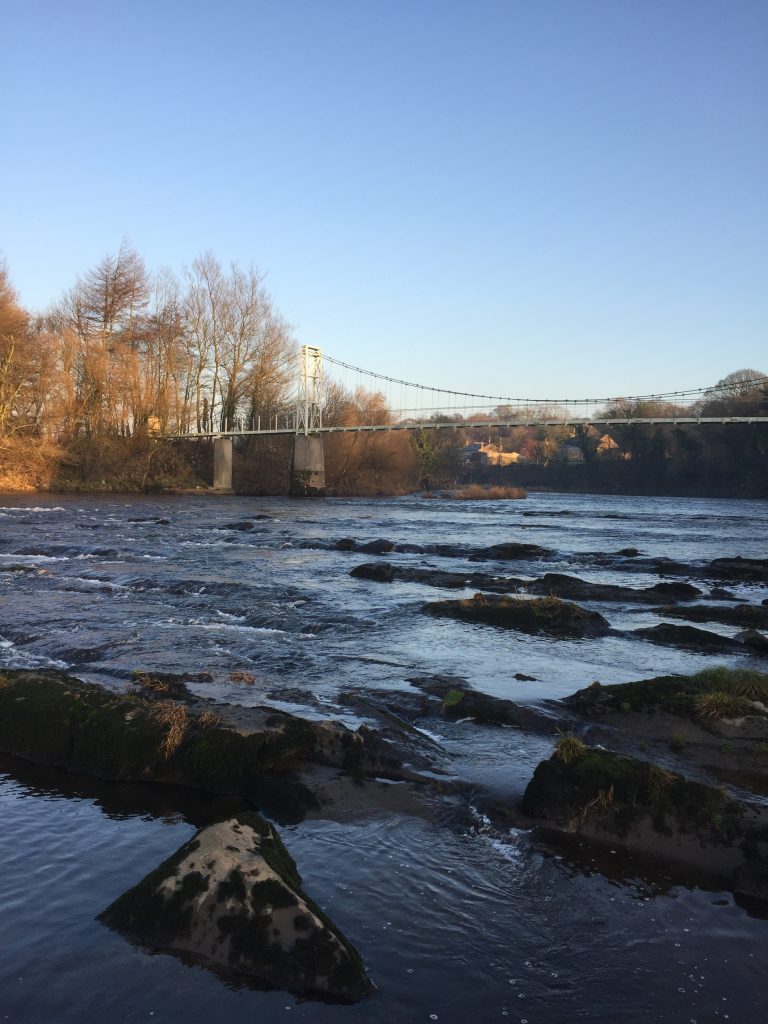 VIA THE SOUTHERN BANK.

Rather than take the track east just after Trough House look out the stile and footpath directly ahead and continue in the same southerly direction to the Dinkley footbridge. Cross to the other side of the Ribble. 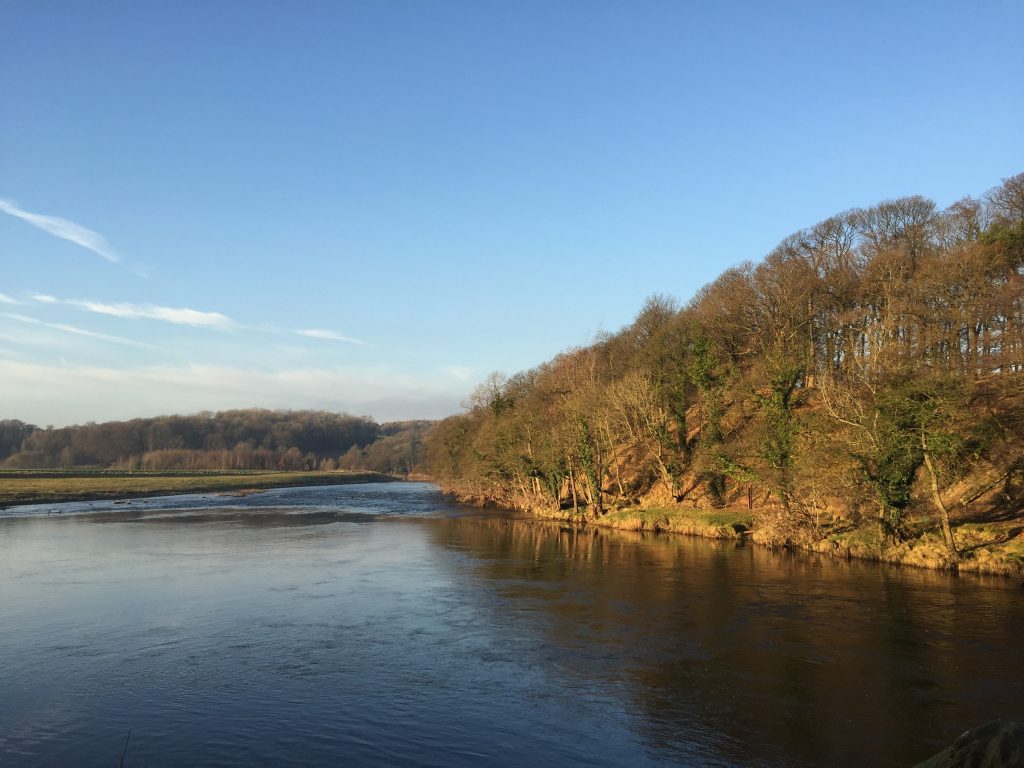 The Ribble south of Dinkley- a magnificent river!

At the point at which the river swings through ninety degrees make sure that you observe the thick sandstone beds of rock which are tilted through bout 45 degrees. Cormorants are also common at this point in the river – a good fishing section of the river. Bear left away from the river up the hill. After a short distance the path becomes a series of steps, which takes you up to a free car park above. However, look for the path on the right which descends to a footbridge. Cross over this and follow the path round to a stile which meets a road .

Turn right and follow the road. Pass through Salesbury Hall, with its commercial centre, and then continue along the road for about a kilometer to a road bridge back over the Ribble to the north side. At this point we pick up the alternative route, which joins from the northern bank.

Follow the road for about half a km until you reach the outskirts of Ribchester and the Ribchester Arms Pub. Come off the main road and follow the small lane on the left called Greenside, which takes us back to the river. You can follow the streets to the Roman Museum, which marks the end of this stage but in order to see the remains of the Roman Baths you need to come off Greenside at the entrance to a small car park on your left and follow the signed footpath. The Baths are about 100m on your right. Exit the Baths and turn right and follow the footpath which takes you to the river around the side of St Wilfrid’s Primary School. Join Church Street and the Musem, the Village Hall and St Wilfrid’s Church are just little further on, on your right. 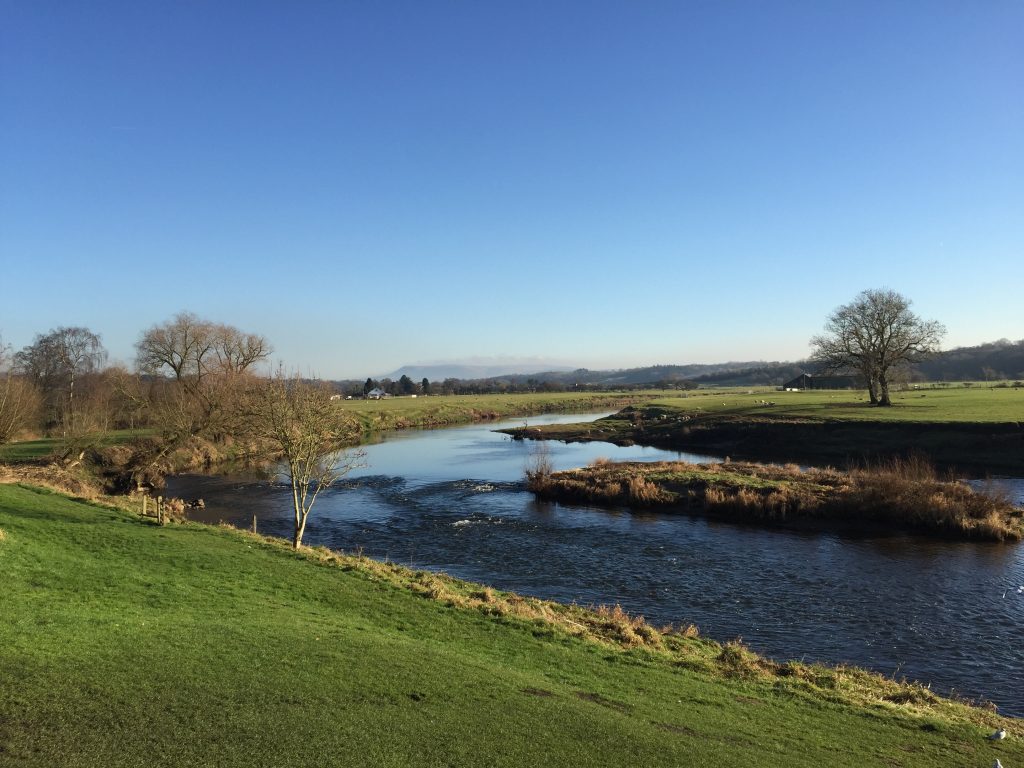 The Ribble at Ribchester with Pendle Hill in the distance

The Ribchester Arms has three rooms and provides good food so is the obvious choice for overnight accommodation. In addition, the Riverside Barn Guest Houses provides bed and breakfast accommodation and is just a little further down Church Street on your left directly by the river.

This can be quite a difficult short section until we meet the Ribble again The paths marked on the map are not always accurate and are quite indistinct despite being part of the Ribble Way! So beware and carefully follow my directions and look out for the odd Ribble Way marker, which will confirm that you are on the correct path.

Just after Trough House take the lane on the right, which passes through a wood and out into fields. Head straight ahead past a lone tree to the right hand corner of the field opposite where you will find a Ribble Way sign marker in the ground. Continue straight on keeping the boundary to that field on your left. At the end of the second field there is gap in the boundary with the field on your left and it is tempting to bear left into that field, which appears to have a well trodden path. However, pass through the gate opposite, which does not have a footpath sign and continue to follow the boundary of the field on your left in the same direction. Then look out for a footbridge crossing a small stream. Cross this into another field and then cross the field by following the boundary on your right.

Almost at the top of field is a gate, which allows you to join a lane. Turn right and then almost immediately take the stile on the opposite side of the lane into another field. Ignore the Bridleway sign. Cross this field diagonally to the bottom corner. Pass through the gate and then descend the contours to the valley bottom and look out for a gate into the next field.

There is large Ribble Way sign post here but the direction it points in is not accurate. Instead carry straight on up the to the top of the small hill opposite you. At the top you will see a strip of woodland ahead, which clothes the bank of the River Ribble. There is a short gap in this woodland. Head towards this and the right and side of it. Descend towards the river using this gap. Just as you get to the bottom of the slope, before the river, you should see a stile on your right near some Ribble way markers, which are in the ground. Use the stile to cross into the woods and then follow the distinct, although sometime muddy, path which now follows the Ribble downstream.

At the bend in the river there is a small footbridge and then continue along the riverbank. After a few hundred meters you reach Dewhurst House – use the large ladder stile on your right to cross over to the house and then pick up the lane away from the house on your left. Follow this to the main road and the Ribchester Bridge. Then pick up the main route.

Complete Stage 27 and return via the alternative route that takes the northern bank of the Ribble and follows the Ribble Way.