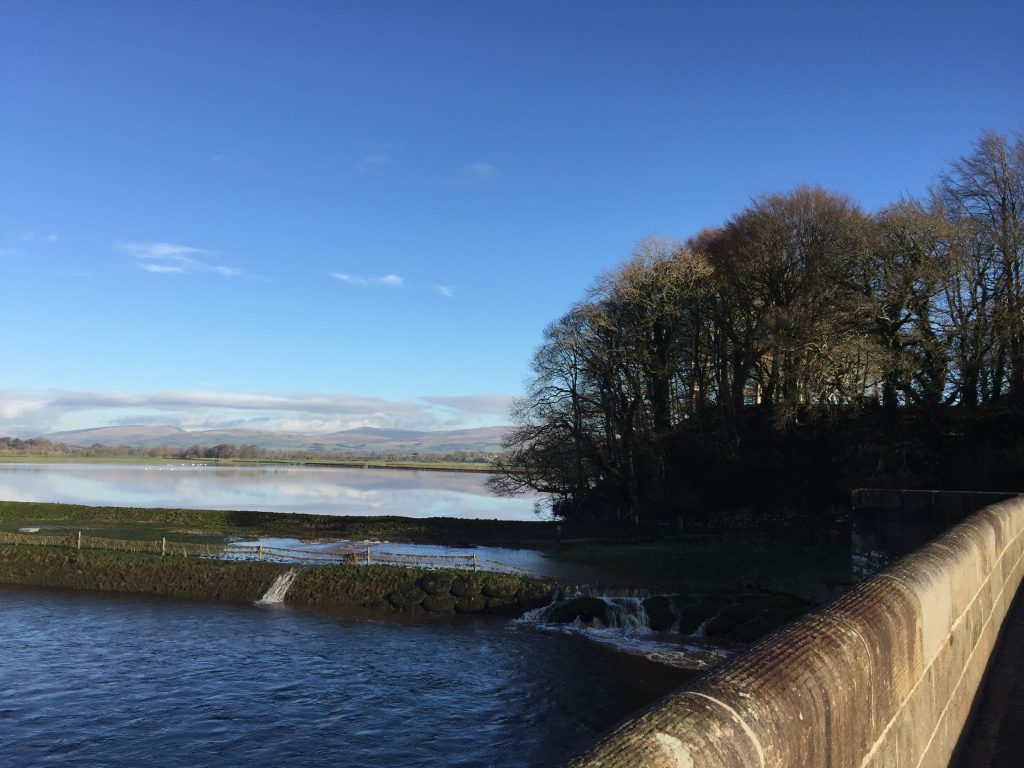 The Loyn bridge with flooding of the surrounding land by the River Lune. The trees on the right stand on Castle Stede- a motte and bailey castle.

Out of Kirby Lonsdale and quickly back into Lancashire. Then a ramble along the River Lune down its valley taking in Arkolme and then heading in land to the village of Gressingham.

A map of Stage 36 can be found below courtesy of Ordnance Survey maps. You can subscribe yourself using this link, https://osmaps.ordnancesurvey.co.uk, which will enable you to import the GPX file which can be downloaded below.

The Stage begins at Devil’s Bridge in Kirby Lonsdale and follows the River Lune for just over 6 miles south.

The Devil’s Bridge dates back to around 1370 and is a grade 1 listed structure and Scheduled Ancient Monument. Its three arches and hexagonal piers of almost golden gritstone give it a lovely appearance. The story is that the Devil appeared to an old lady promising to build a bridge in return for her soul but the lady tricked the devil by throwing bread off the bridge and her dog followed outwitting the Devil.

We use the Lune Valley Ramble for most of the Stage – a walk that is 16.5 miles long and begins in the centre of Lancaster and ends where we begin. Because we following this walk, which is generally well signposted, I will keep the route detail to a minimum and just highlight the parts, which are not clear or obvious.

From the Devil’s Bridge descend to the western bank of the Lune and head south to the new main road, which now by passes the centre of the town. Cross over the road and then use the steps to descend back to the riverbank. Observe the colourful new concrete bridge from the 1930s over which the road crosses – a contrast to the stone of Devils Bridge.

The first three miles of the path keeps close to the river. Sometimes we are on the bank above the river, sometimes by the very edge, sometimes in an adjacent field and sometimes we make use of the flood embankment. However, the path is always clear but just before the first bridge, which carries water pipes and cannot be crossed by foot, make sure that you climb up on to the bank so that you can cross the access to the bridge.

On the opposite bank you can see both Gragareth and Inglebrough in the background, which then are hidden by the hamlet of Over Burrow, which was the site of an important Roman fort. The River Leck, which we followed on the previous stage, joins the Lune at this point. 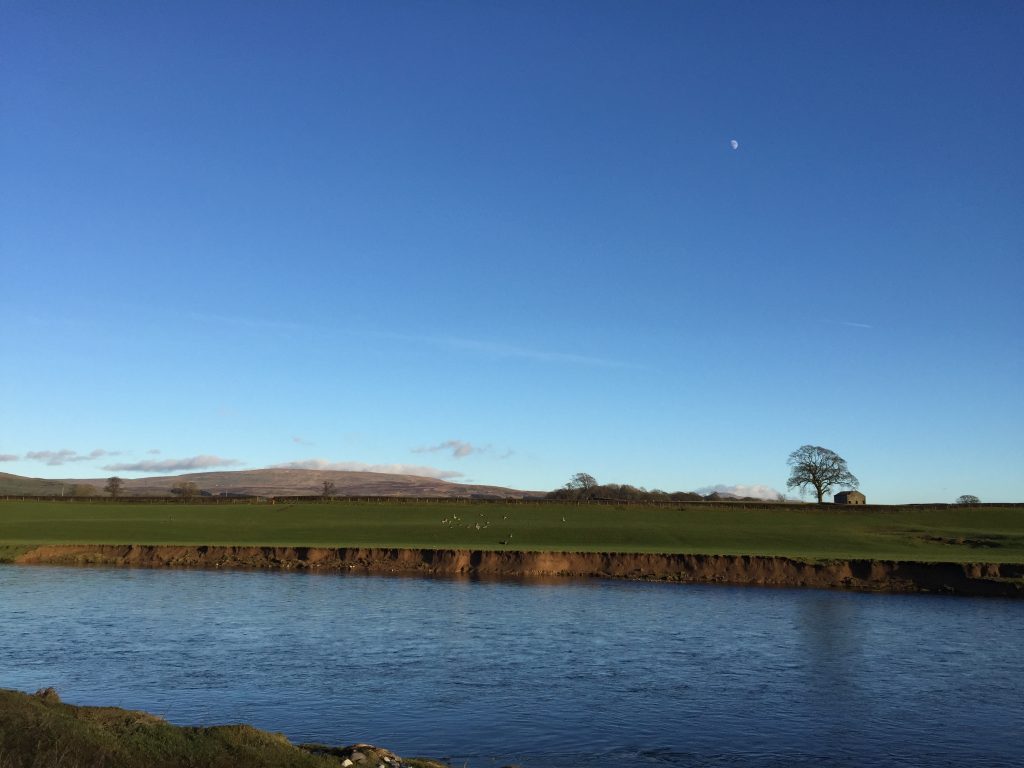 Initially the river is straight and then bends to the right in a huge curve through almost 90 degrees. At the point at which it begins to bend left the route becomes a little more complex as we no longer follow the edge of the river until just after the village of Arkholme. The path now heads away from the river – there is a hut (fishermans?), which also marks this point.

Confusingly, the OS map shows no footpath crossing the field to the beginning of a track and Newton Beck – the concessionary footpath that we have just been following seems to just end before picking up the next official footpath. I could not see any waymarkers at this point so to continue please take a route through the middle of the field about equidistant between the Lune on your left and Newton Beck and the edge of the field on your right. You will then come upon a series of man made terraces, which are clearly marked on the map and are part of the flood defences on this part of the river. Follow the arc of the embankment for a short distance – there are a number of waymarker posts.

Come off the embankment and bear around to the right and look for the footbridge, which crosses a deep drainage ditch in which Newton and Beckerthwaite Becks flow. Unfortunately when I last undertook this part of the walk the bridge had been toppled over by recent flooding so could not be used to cross the beck. I was fortunate that a couple of trees had become lodge in the ditch a little further down, which enabled me to cross. If not I am not sure how I could have continued. It may be that there is a crossing further down – the map shows a track and the word “Ford”! Hopefully Lancashire County Council will have put the bridge back in place by the time you are walking this section. 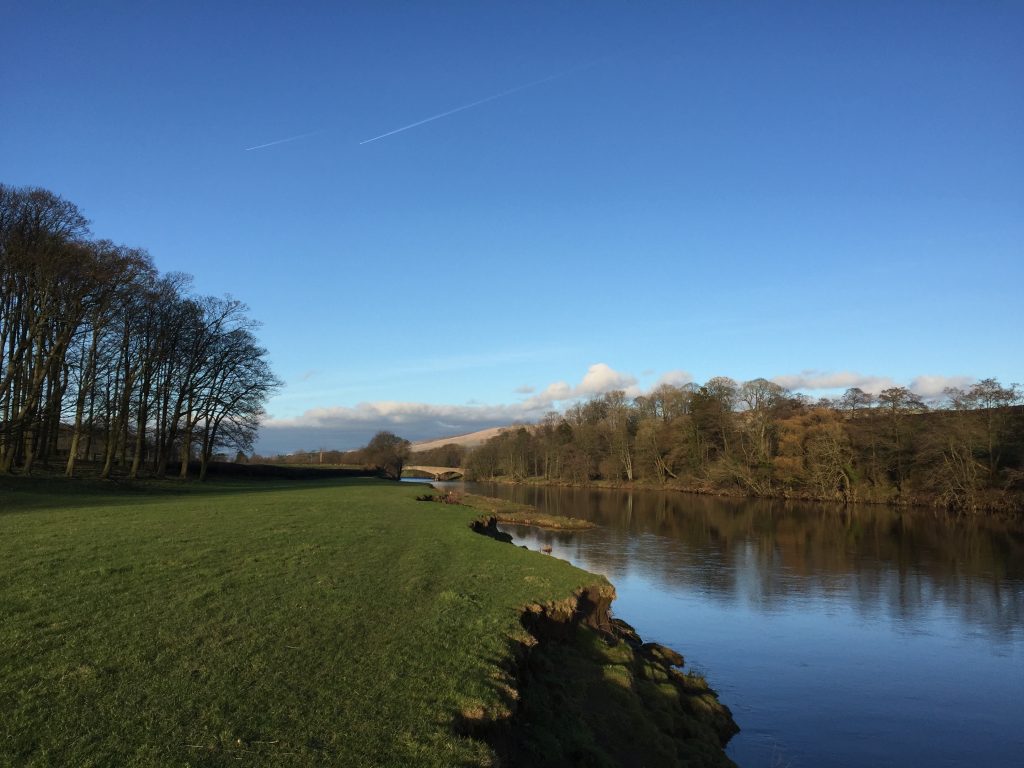 The Lune is a beautiful and majestic river

Carry straight on in southerly direction. On your right is a bank with trees and then buildings, which constitute Higher Broomfield. The OS map suggests that the Lune Valley Ramble crosses the water and follows the track up to farm and then continues along the bank to the next farm Lower Broomfield. However, it is much simpler to continue along the flood plain between two ponds, over another footbridge to the track which takes you up to Lower Broomfield. There is a sign here that invites to use the track and go through the farmyard. Pass through the farmyard and then towards the back of the farm exit by two metal gates on your left. On the other side continue in the same direction and then over a stile into a field – ignore the wooden gate!

Just before you come into the village proper, and where this track turns right, you are confronted by a large mound of earth, which is clearly the remains of another Motte and Bailey castle from the times of William the Conqueror. Around the back of it and almost dug into its foundations is the tiny St John the Baptist Chapel .The Lune valley has a great concentration of these type of castles with similar examples at Melling just across the Lune and Castle Stede just north of Hornby, both of which we saw and Stage 34.

Just after the church take the road on your left and then turn left again and head down and out of the village towards the river. The village was a crossing point of the Lune and most of the village consists of lovely 17th and 18th Century cottages on a lane from ran from the main Carnforth to Kirby Lonsdale turnpike road to the river and it is at the bottom of this road you will find the Ferryman’s cottage.

Take the track on your right and enter the field. After around 200m, cross into the adjacent field on your right using the low stile and then continue in a SW direction keeping the boundary of the field immediately to your left. After a short while the path comes back to the bank of the river Lune. 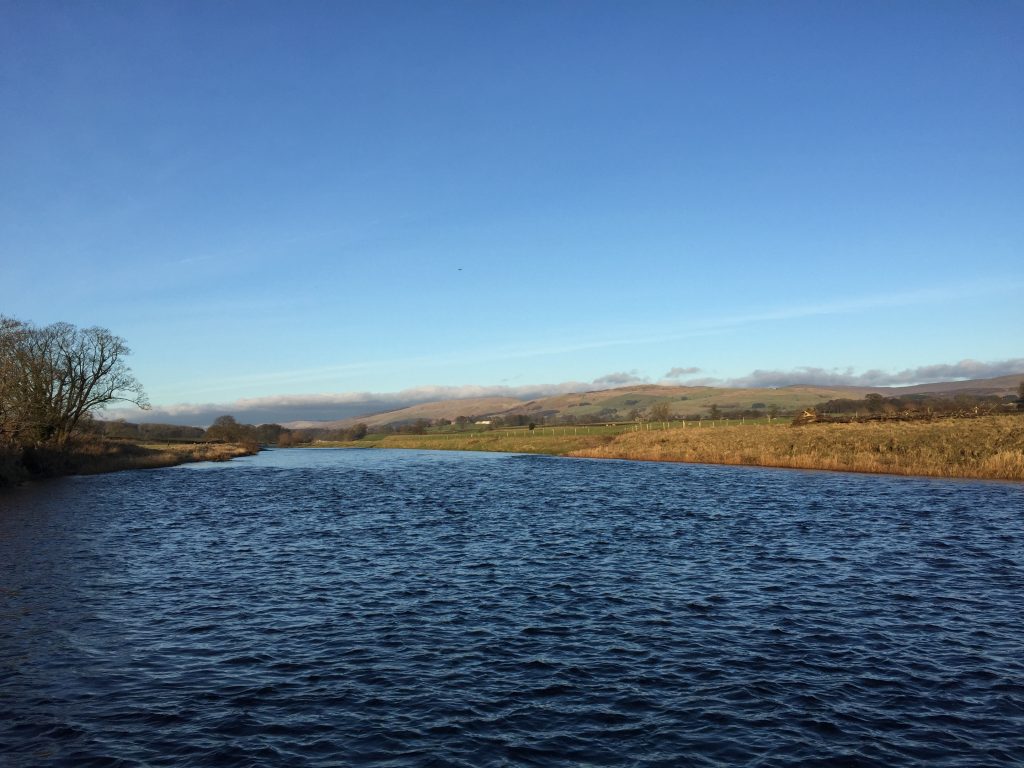 But choppy in places!

After a complex mile or two the route becomes straight forward again and is generally well marked and, with the exception of a small stretch near Thrush Gill Wood, follows the river bank, although in parts through various woods.

And so, having followed the banks of the Lune for almost 6.5 miles along the Lune Valley Ramble, we finally meet the first road bridge across the river – The Loyn bridge. We could continue for a further 3 miles but I think it is time to head in land a little so that we can take in views from above the valley and beyond.

Exit the footpath on to the road. Before setting off the bridge presents an excellent photo stop looking up river towards Ingleborough and Gragareth. The Loyn Bridge is thought to date back to 1684 and is designated an ancient monument. Its architecture is interesting with three arches and triangular “cutwaters” in sandstone blocks providing pedestrian safety from the narrow single track road that it carries.

Take the road westwards towards the village of Gressington. After a couple of 100 meters we will take Fleet Lane, which comes off the main road on the left. Whilst it is not pretty and slightly longer than the main road it does avoid the traffic. After Fleets Farm turn right where the road splits and descend into Gressingham. Then turn right and follow the road over the river up to the main road. On your right is St John the Evangelist church.

You may want to cut the Stage short and stop at Arkholme, where the Bay Horse Inn has three ensuite rooms and can be found at the cross roads in the centre of the village. Alternatively it is a short walk back into Hornby for the Castle Inn or beyond Gressingham is the Redwell Inn on the B6254 about three quarters of a mile off the route.

See Stage 34 for one long option!

There is also a shorter option but I have not yet completed all of this. Just short of the Loyn Bridge head inland to the road near Storrs Hall. Then pick up Locka Lane and then across fields to Gunnerthwaite and then on to the continuation of Keer Holme Lane. Turn right to the caravan park at Docker Park. Use the footpaths to avoid the dog-leg in the road and then continue towards Newton. Turn off left for “Outfield” and then take the bridleway into Whittington. From here rejoin the Lune Ramble back into Kirby Lonsdale. Or you could exit Whittington via Hosticle Lane and then use footpaths via Sellet Hall and Sellet Mill to return into Kirby Lonsdale.