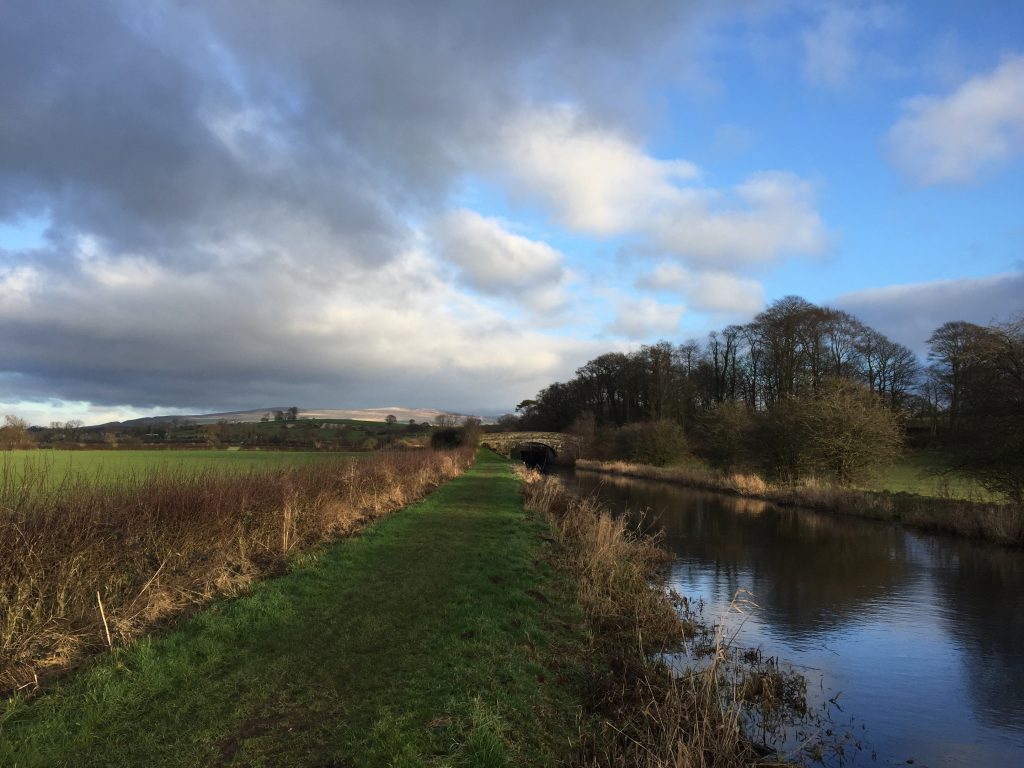 The Glasson branch of the Lancaster Canal

We follow the Lancaster Canal, including the Glasson branch, for much of this stage before heading east across to Scorton, a pretty village at the foot of the most Western part of the Bowland Fells – Nicky Nook.

A map of Stage 30 can be found below and a GPX file of the route downloaded using the link below.

The docks at Glasson were opened in 1787 as an alternative to the port at Lancaster. Whilst the latter had been a port since before Roman times it was difficult to navigate due to the ever-changing course of the river Lune. Whilst efforts were make to straighten, and widen it and St George’s Quay was built in 1750, it became apparent that with the increasing size of ships that an alternative would have to be found nearer the mouth of the river. In 1780 Glasson was chosen as the best site and land was bought from the Dalton family at Thurnham Hall.

There have been various developments over the years. There was the link to the Glasson branch of the Lancaster Canal in the early 1820s, the building of a Graving dock in 1837, the extension of the East Dock to meet the new railway in the 1880’s, the construction of the West Quay in the 1950’s and finally the widening of the dock gate and the North Wall river berth in the 1980’s. Unfortunately the railway closed to passengers in the 1930’s and then to freight in 1964. The dock is connected to Glasson Basin Marina by a lock, which has many boating services and up to 220 mooring facilities.

Most of this stage involves following the Lancaster Canal so the directions are quite simple.

At Glasson retrace your steps from the viewpoint back down Tithebarn Hill to the swing bridge, which crosses over the lock gates and mark the entrance to the Marina and Basin. Cross the bridge and then enter the car park by the side of the marina. Head to top of the basin where you will find the Glasson Branch of the Lancaster Canal exiting the basin.

Continue along the towpath in a SE direction for about 2.5 miles. There are just six locks on this stretch of the canal, which takes the canal down from 76 feet at the junction with the main canal near Galgate to sea level at Glasson. 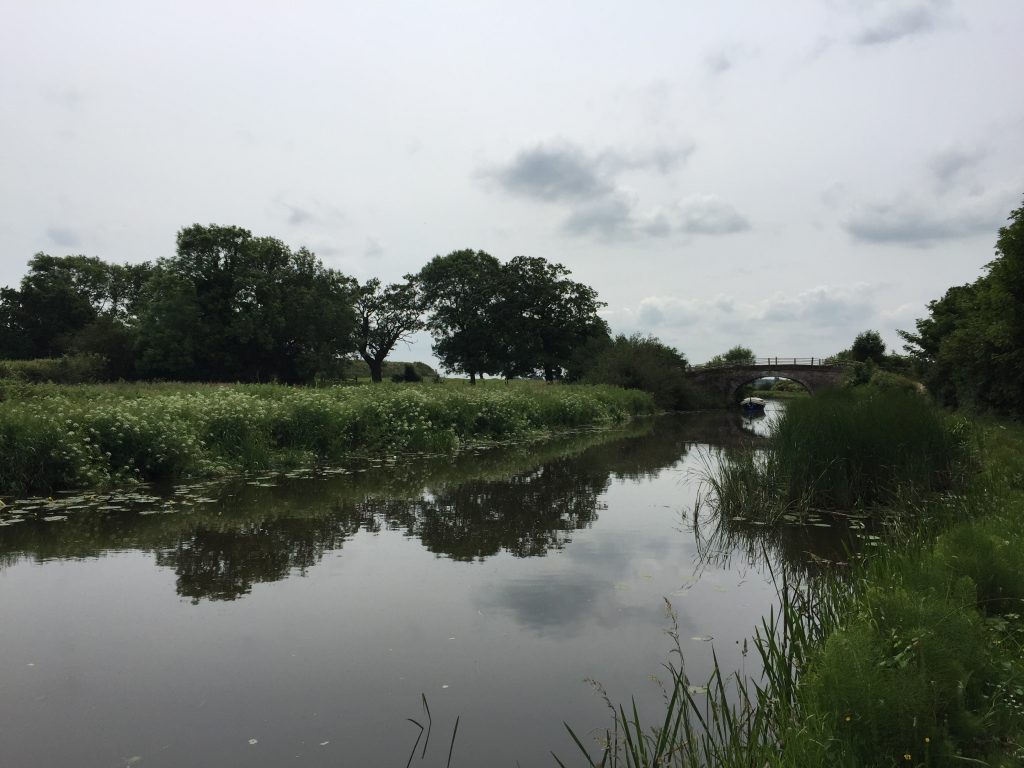 At the first lock is the Conder Mill pub, hotel and restaurant. After this the canal makes its way through lovely rolling fields and in the distance are the Bowland Fells, which are getting ever nearer – if slowly.

Finally you will reach the first lock, with a lovely arched bridge behind it. This marks the junction with the main length of the Lancaster Canal. Climb the steps at the side of the bridge and then cross over the bridge, noting the lovely cobbles. 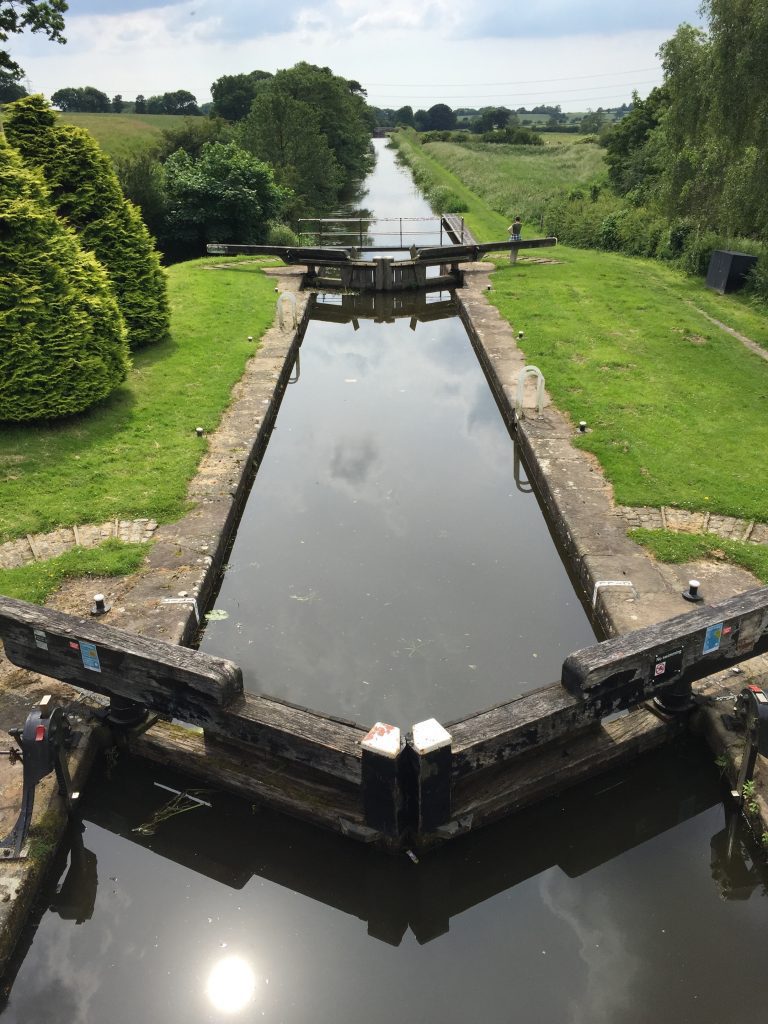 The first lock on the Glasson branch of the Lancaster Canal

We will now follow the canal south for just over four miles again through lovely rich rolling fields – a product of glacial deposition. You will note there is not one lock on this stretch but the canal does meander extensively in order to keep at the same contour level.

In the first part of this section of canal is some lovely woodland and parkland, which belongs to Ellel Hall. This was once owned by Lord Ashton and is now the centre of the Ellel Ministries – a Christian organisation founded here and which has now spread across the world. It is a shame that we cannot see the house from the canal.

Eventually you will reach Bridge 73 and we finally leave the Lancaster Canal – but not for last time as we will pick up another section on a later Stage. Exit the towpath by the gate at Greaves campsite – also marked as Cabus Nook on the OS map. Pass over the bridge to the other side of the canal and then use the tarmacked road to access Cabus Nook Lane.

Turn right and head SW. Just after three properties on your right is a layby on the left. At the beginning of this is gate with a Bridleway sign. Enter the track and follow this to the A6. Cross the main road and carry straight on up Weavers Lane, which is sign posted Claylands Park. Pass the farm and descend to the many buildings which mark the entrance to the caravan park. Head straight on to the Stepping Stones Bar and Restaurant. The footpath follows the right hand side of the building into the beer garden at the back. Use the path and steps to the left to descend the steep slope down to the River Wyre.

Fortunately there are no longer stepping stones but a magnificent footbridge across the river. Use this and then go straight ahead in the field on the other side of the river towards the railway embankment – this is the main West Coast line from London to Glasgow. When you get to the embankment turn right, cross over the stile and follow the embankment for about 50 meters. Then turn left and use the bridge to cross under the railway. Cross over the stile into the next field and then head slightly right towards the right hand side of the buildings on the other side of the field. Cross over the stile and follow the path and then a small drive to exit on to the main road through Scorton. Turn left and head to the centre of the village, which marks the end of the Stage.

The most obvious accommodation can be found at The Priory, which is right in the centre of Scorton on The Square. If you cannot stay here then there are a couple of options back on the A6 including Holly Michaelangelo’s in Forton and the Crofter’s Hotel in Cabus on the outskirts of Garstang.

Assuming that you have completed the first part of the Stage to Galgate as part of the day walk on Stage 29, then complete Stage 30 to Scorton and also walk Stage 31 to Dolphinholme. Then return to Galgate via the roads, which is just 3 miles and makes the full day 15 miles. This can be reduced to 12 miles by ordering a taxi from Dolphinholme to Galgate.