On the Pennine Bridleway looking down on the Greenbooth Reservoir

Another great moorland Stage with super views and we reach our second highest point on the Eastern Loop, when we make a small detour to Top of Leach, which is 474m high. More wind turbines.

Map of Stage 52 – Unfortunately OS maps of the Eastern Loop are not provided. However, if you e mail lancashireway@aol.com and a full GPX file of the Eastern Loop will be sent to you and this can be down loaded on to OS maps at www.osmaps.ordnancesurvey.co.uk. As an alternative you can view the interactive Map of the Stage below and/or download the GPX file for this Stage only by following the instructions below.

It is also the second highest point on the Eastern Loop and is marked by a trig point and a five sided commemoration stone.

Cowpe Low is one of those very distinctive hills that you will easily recognise from now on.

Edwin Waugh stayed at the near by Foe Edge Farm and wrote some of his best works here.

Apparently it is the second largest inland wind farm in the UK.

Cross the main road and take Hall Street opposite. Just after the entrance to two schools on your right, when the main road turns left, turn right into Hall Fold. We re-join the Rossendale Way at this point, the first time since we left it just before Hades Hill. I was tempted to follow the Rossendale Way but it misses the lovely historical centre of Whitworth but does take in the “gorges” of Healey Dell, where the River Spodden cuts through the valley.

Follow this uphill bearing left and then continuing to a sign for Fold Head Farm. Just before this the Rossendale Way follows a series of steps to our left. However, when last visited this path was closed and is often very overgrown. So continue on up the hill, taking the left of two roads and then take the next left sharp left and cut back on yourself. Pass Fold Head cottages onto a farm and then bear right on a track. Pass another farm and then ignore a track to the right and carry straight on passing another farm and then turn right over a style by two large metal gates.

Follow the impressive wall on your left down, with Spring Mill Reservoir on the other side, to a stile and large metal gate. Bear right away from the wall down to a stream with a lone tree and a footbridge. Cross the footbridge bear left and then right up the steep track up the hill. At the top of the initial steep slope there is a track which turns left along a walled way to some disused buildings. However, ignore this and carry straight on along a grassy path. This is marked by a Rossendale Way marker. Almost immediately the path splits into two and bear right at this point and we will continue up the side of the valley, which is occupied by Fern Isle Brook. Carry on to a stile gate and then carry straight on to a disuse wall. At this point there is no distinct path but we will follow the broken wall to the left up a slope to pick up a distinct track at the top of the slope. Turn right. We are now going to head in a north westerly direction along through a field with the quarry workings just to our right. Continue until you come to a stream and the remains of a wall composed of flags on their side. When you come to this wall of stone slabs you will find a ladder stile at the left end of this wall. Cross over this ladder style, bear slightly left and cross the stream using more stone slabs. Then bear right slightly and continue in a westerly direction for about 200 metres until you come to a very distinct stony track. 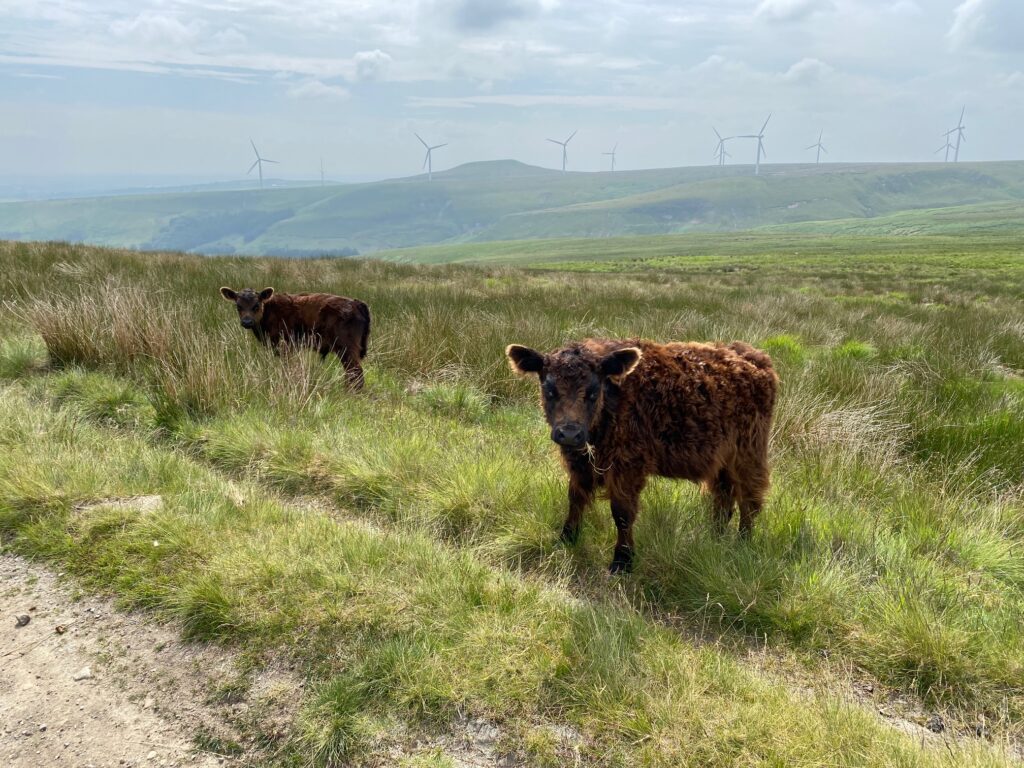 Friends on Rooley Moor looking over to Scout Moor

Please note the Rossendale Way monument on your left with the summit of Top of Leech just above this. Officially, the Lancashire Way leaves the track to ascend to the Trig point of Top of Leach which at 474m is the highest point in Rossendale and we will not reach this height again on the route. There is also a five-sided pillar stone that commemorates the creation of the borough of Rossendale in 1974. The four main towns of Haslingden, Rawtenstall, Whitworth and Ramsbottom are inscribed on four of the faces, whilst the other explains why the pillar was erected. 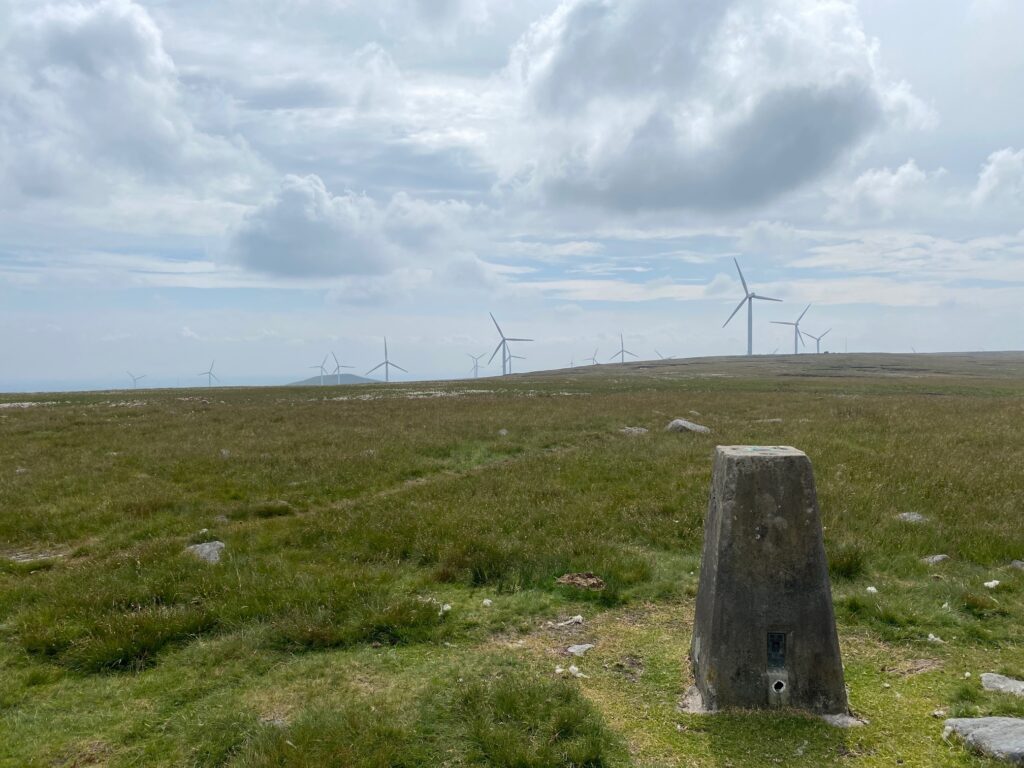 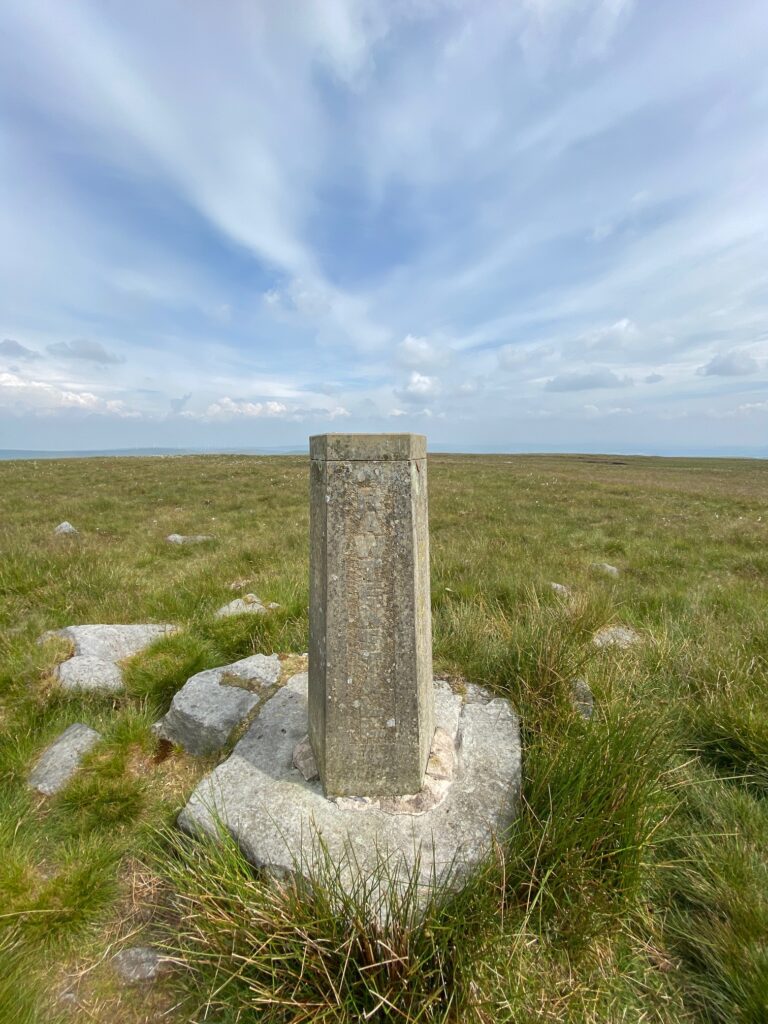 The stone pillar commemorating the creation of the Borough of Rossendale

Return from the trig point the way you came back to the track and look out for the Rossendale Way commemorative stone if you have not already seen it. Continue along in the same direction to the point at which the Pennine Bridleway turns left at a three finger signpost.

Turn left and continue to follow the PBW and shortly after this you can see Cowpe reservoir and a smaller high level tank to your right – Cragg High Level Tank. Continue along the edge of the slope and then the path enters a quarry but continues roughly in the same direction along the slope. This path eventually exits the quarry back to the boundary wall. You will then come across a man-made structure advertising the bike trails around this area. The path then continues in the same direction and begins to descends a slope towards the distinctive hill called Cowpe Low.

For the past mile or 2 we have been following both Rossendale Way and the Pennine Bridleway but at this point the two diverge. The Pennine Bridleway now descends into the valley to the North down into the town of Rawtenstall. We, however, are now going to turn South along the Rossendale Way towards Scout Moor with its windfarm but not before bagging another trig point by following the path straight ahead and ascend to the top of Cowpe Lowe (440m) and then return back to this point.

The Rossendale Way actually circumvents the hill of Cowpe Lowe but I see little merit in doing this as the path is not distinct and has no particular benefit.

Having returned to the point at which Pennine Bridleway and Rossendale Way diverge, head in a southerly direction and follow the Rossendale Way. Before long you will see a nameless reservoir to your right and then what is known as Waugh’s Well.

Edwin Waugh was a prolific Lancashire dialect writer born in Rochdale in 1816. He had a poor childhood but through self education begin writing and lecturing in his forties. There used to be a farm nearby called Foe Edge farm, at which Waugh stayed apparently to curb his excessive drinking. The stay of several months worked and he apparently wrote some of his best work during this and subsequent stays at the farm. The well was built by the owner of the farm, Mr Edmund Chatwood, in 1866, and christened with some ceremony after a dinner at the Farm – presumably with and after his friend Edwin. 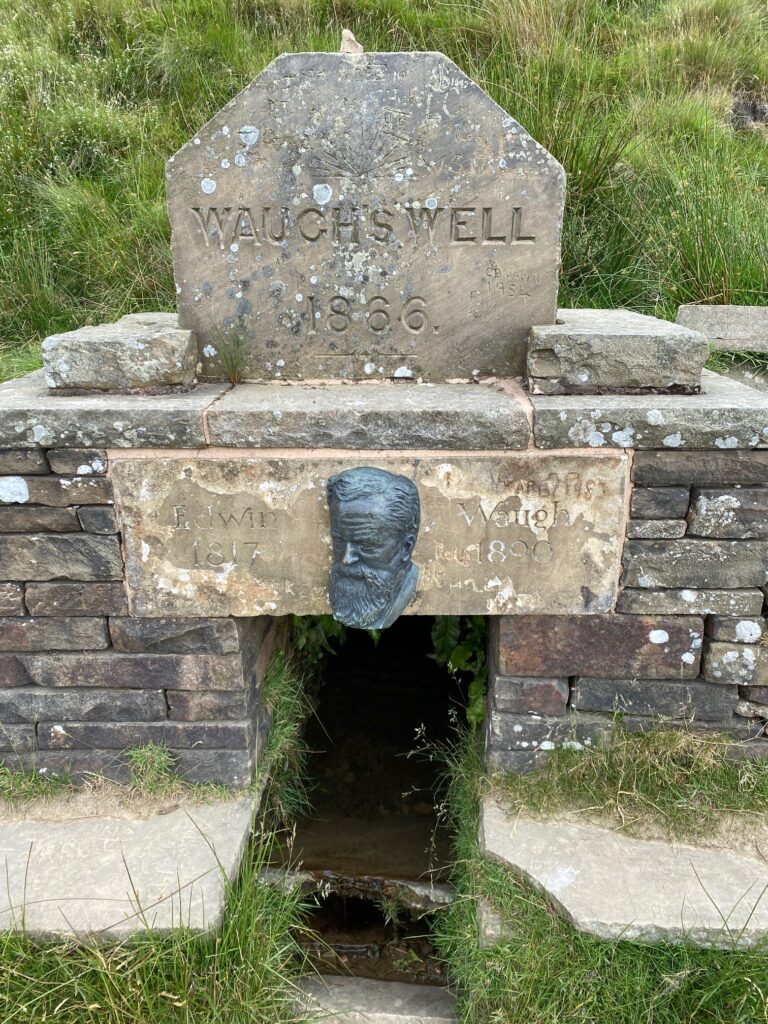 After the well continue straight on up the side of the hill and then along a v shaped valley created by a stream. At the top turn right and after 50 yards you will come to a junction of two tracks. If you wish you can make a quick detour to the top of Scout Moor with its summit and trig point called Whittle Hill (467m). Return and then carry straight on in the same direction as before (SW) and follow the track down the hill. The area we are passing through includes a large number of wind turbines, which are part of Scout Moor Wind Farm. With 26 turbines in total, it is apparently the second largest inland farm in the UK. 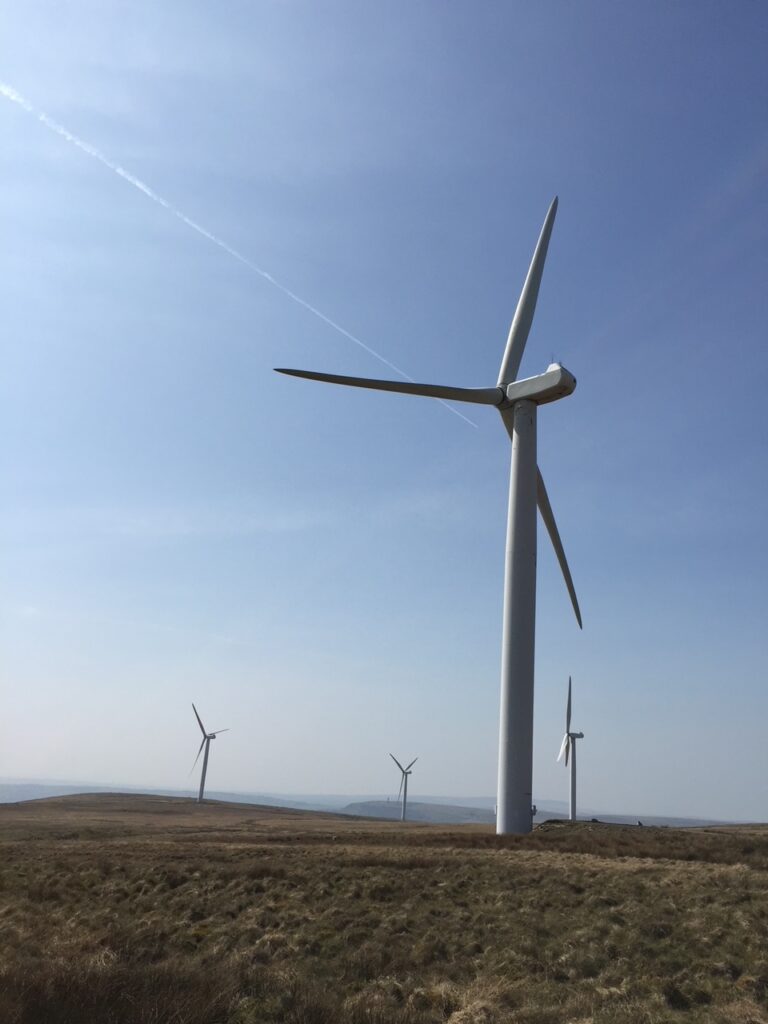 Some of the wind turbines on Scout Moor 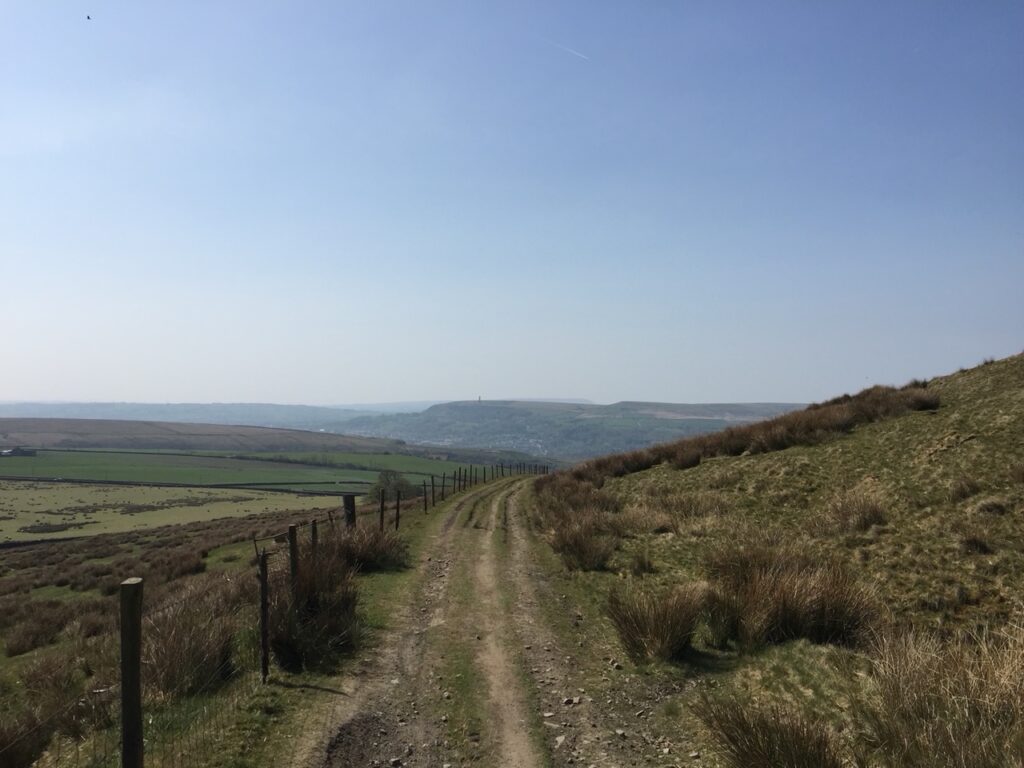 When you are at the bottom of the hill approaching Fecit Farm bear right off the main track. The path is not that distinct – there was a broken marker post but it is not always clear. Carry on along the side of the hill and then along a boundary wall. Pass behind Kay Close Farm and then look out for the stile on your left. The OS maps suggest that the Rossendale Way continues straight to the next premises but this is not so. Turn left over the stile and follow the path to the road – Rochdale Road A680.

Turn right and follow the road around the bend and down the hill. Ignore the first road on the left but take the second called Bleakholt Road. Follow to the end and then turn left and then take the footpath on your right after about 50m. We now exit Lancashire for short while and return back over the border with Great Manchester in Stubbins.

Follow the footpath past the Animal Sanctuary all the way to the road – A56. Turn right and the Stage ends at the Duckworth Arms.

There are a number of bus stops on the A56 including ones visible from the pub, which take you either south into Bury or north to Rawtenstall. About 1km south on the A56 is the Eagle and Child pub and hotel for overnight accommodation.

A super walk involves returning to Whitworth from near the end of the Stage at Fecit Farm. Follow the paths to Knowl Hill via “Paradise”. From the summit head on to the dam across the Naden Middle Reservoir and then into Whitworth ideally taking in the Healey Dell Nature Reserve. It is not short but a great walk taking in the very best of this area.