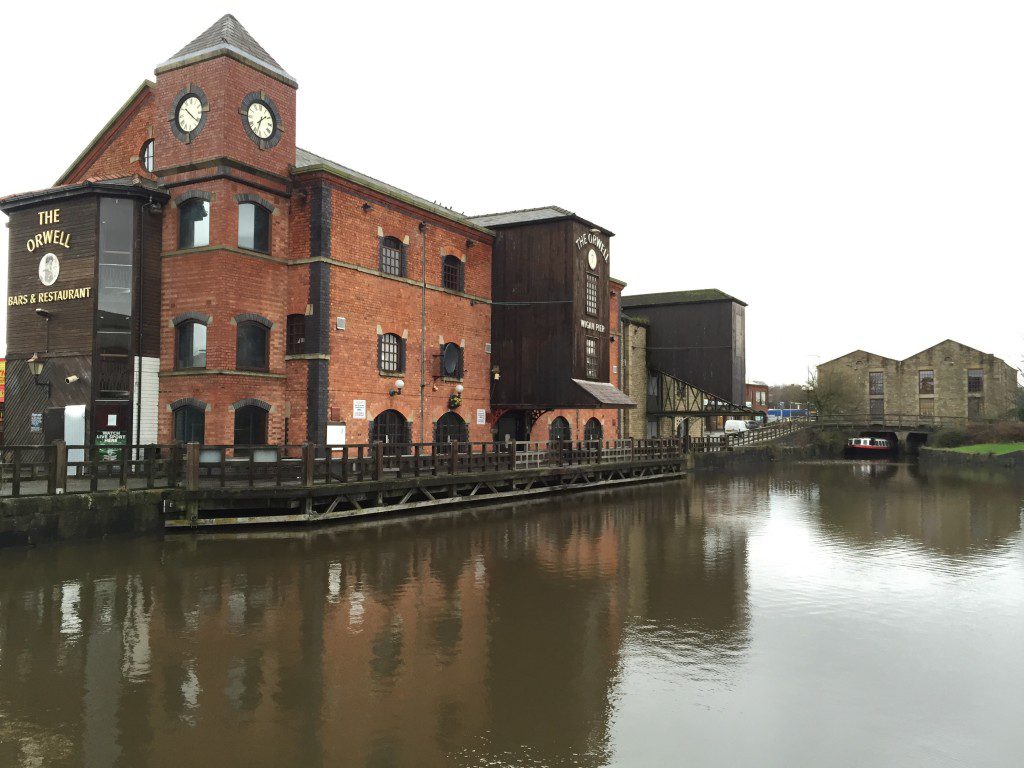 Following the Leeds Liverpool canal into the heart of Wigan and what was once the end of the canal – Wigan Pier. Not a great section unless you enjoy industrial history but virtually flat. However, I make no excuse as any walk through Lancashire has to acknowledge and observe the impact of the Industrial Revolution, such a key part of its history.

A map of Stage 8 can be found below courtesy of Ordnance Survey maps. You can subscribe yourself using this link, https://osmaps.ordnancesurvey.co.uk, which will enable you to import the GPX file which can be downloaded below.

At the Baby Elephant descend on to the tow path of the Canal and turn right and continue in an easterly direction. All along this section you can pick out the River Douglas to your right. Not unsurprisingly the canal follow the river as this is the bottom of the valley and will give rise to the fewest number of locks – an expensive part of building a canal. Indeed there are only two locks on the whole this stage.

Our first destination is Crooke with its marina and a pub. www.crookevillage.co.uk is an excellent website to visit, with a very comprehensive history of this area and the quest to mine and transport coal. 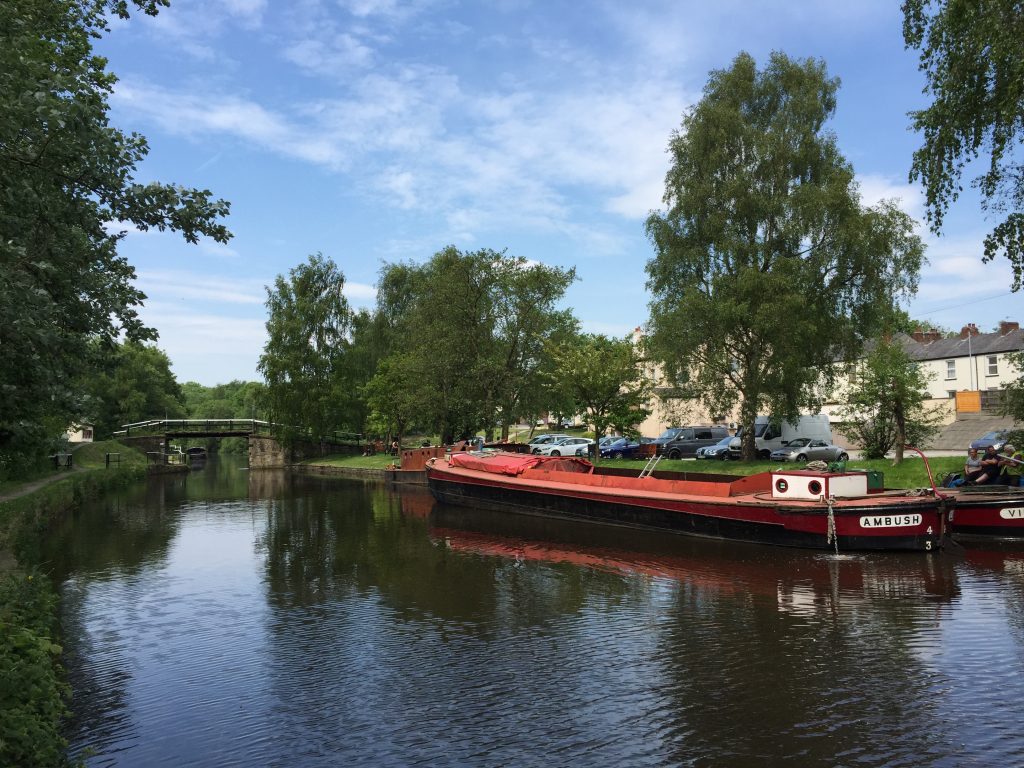 Unfortunately very little of this history physically remains other than some houses and the pub – Crooke Hall Inn – even Crook Hall has long since gone after serious subsidence from the local mining. There were numerous collieries in the area to both the north and south and it was Crooke, which was chosen as the point at which coal from all directions was to be loaded onto barges initially on to the Douglas Navigation and then on the Leeds Liverpool Canal. There used to be a pier here, which allowed coal to be tipped into the barges below – see picture. Look out for the very distinctive wide flat open canal boats, which transported up to 80 tons of coal at a time. Indeed you will have noticed the width of the canal, much wider than may canals, which facilitated the transport of vast quantities of coal and other heavy goods. There were numerous tramways to the village and even a canal tunnel from one colliery. On one tramway, the horses were replaced by steam locomotives known as Walking Horses in 1813, some 13 years before Stephenson’s Rocket! In 1841 the population of Crooke was just 66, but had risen to 624 by 1901. Before leaving Crooke, cross over the bridge by the pub and find the information point to the left, with its brief summarized history. Just behind this spot in the road are old tram lines and I suspect this was the location of the “pier”. 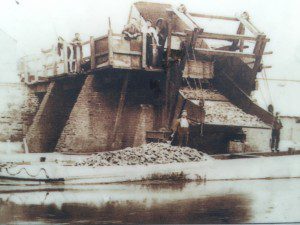 The pier at Crooke.

Re trace your steps back across the canal and then continue in an easterly along the canal bank. The site of the Hall built in 1604 and demolished in the 20th Century was around the grassy area within the marina, which itself is a much more modern affair. Continue along the canal towpath. From Crooke onwards the area becomes much more built up and not always pretty. To the south are the huge distribution warehouses and the chimney of the Heinz factory in Kitt Green in Wigan – its red lit “57 varieties” sign always visible from the M6.

Pass under the main road just after Martland Mill and continue along the canal bank. The left hand side of the canal on this part of the Stage is very industrial although there are numerous ponds often with large numbers of swans. To the right is a swampy waste ground, which further on has been developed on a huge scale thanks in part to Mr David Wheelan, a man of the town. His main development is the DW Stadium named after him and opened in 1999, which hosts the very successful Wigan Warriors Rugby League team and also Wigan Athletic football club, once of the Premiership. You can see the two arched white metal frames, which span the two sides from some distance away. Associated with this is the five a side pitch “Soccerdome”, a DW Fitness Centre and then a training complex including an athletics track. Accompanying this, is the inevitable retail park, large supermarket and a B&Q warehouse, which we pass directly behind. Ahead is the centre of Wigan with the remains of at least two chimneys and the very distinctive tower belonging to Trencherfield Mill – see later.

After passing B&Q, we pass under a railway bridge and then a road and the canal bends to the left as it enters the final stretch of this part of the canal. On the other side of the canal are two old warehouses, one of which is now the Wigan Pier pub. The other unfortunately was an exhibition centre called “ The Way We Were” but it closed in 2007 and is now quite derelict. NB Development and renovation work has been undertaken in 2021! 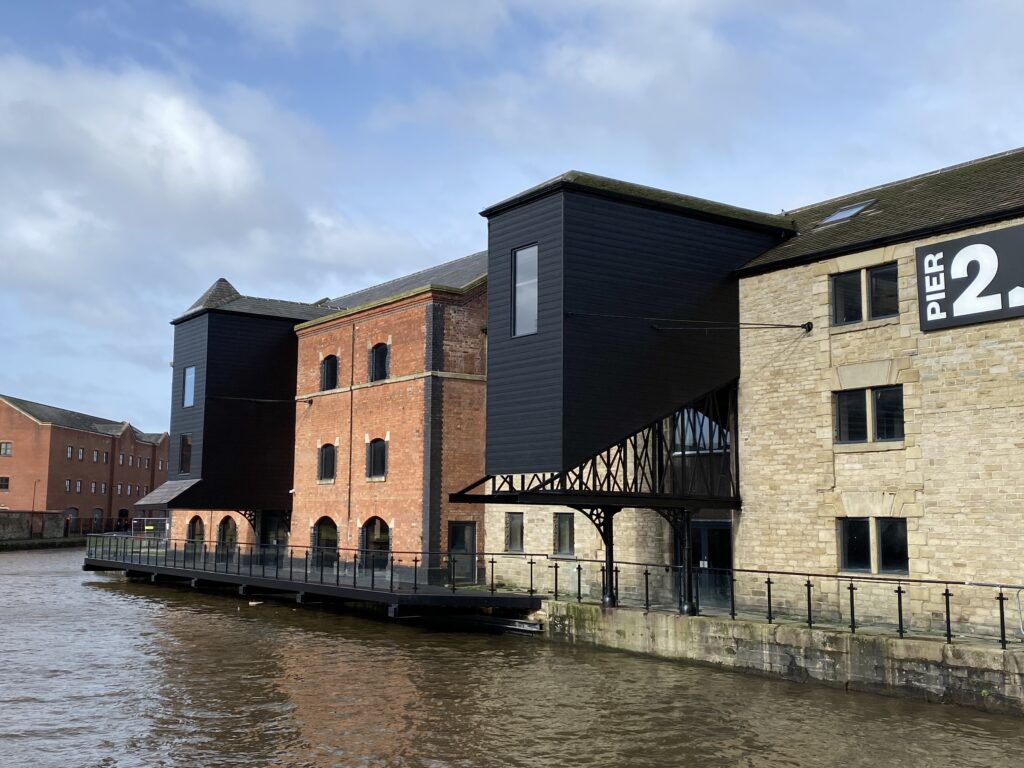 On our side you will notice a very static figure of a person – but do not be afraid, this is a statue of a “Pit Brow Lass”. Next to it is an information board that explains the life of this girl and some facts about Wigan Pier. The Pier itself is believed to be another tipper, similar to the one in Crooke. Apparently trucks would descend a track by gravity and topple over upon hitting the pier to tip its contents into the barge below! Unfortunately the pier here is not original as that was sold for £34 for scrap in 1929. It was made famous firstly in a Victorian Music Hall joke and then by George Orwell in his famous book of 1936 about industrial decline – The Road to Wigan Pier.

Continue along and over the cobbled bridge to find another statue – male this time looking over the wall down to the canal. Another information board gives information about the life of “bargee” and the buildings around. The Terminus Warehouse is the one with the double arches into which boats can and do park to load and unload their cargo. This is the end of Stage 8 but before we continue I need to explain another part of the history of this canal.

If you remember the section of canal that we have been following was completed in 1781 and at that point the canal terminated at the Terminus Warehouse opposite us. The cobbled bridge you have just passed over and the canal, which branches off from Wigan Pier almost at right angles, did not exist and was infact only opened in 1816, 35 years later!!

Stage 9, which follows, begins with a canal walk from the Pier up to Top Lock which is a 2.5 mile stretch of canal which climbs 214ft out of the Douglas Valley by a series of 23 locks. Until this stretch was completed the Leeds Liverpool canal did not exist in its entirety. It was completed at the very end due to the engineering required and its associated high cost.

If you finish for the day at this stage, or if you give your weary legs a rest over lunch, then please do look at www.wiganworld.co.uk, which has an interesting take on Wigan, including 25 interesting facts, famous people and more of its history.

There is accommodation in Wigan including a Premier Inn and Mercure Hotel in the centre, just a short walk from Wigan Pier.

A short Stage of just 3 miles. Either retrace your steps or catch the train from Wigan Wallgate station back to Gathurst.