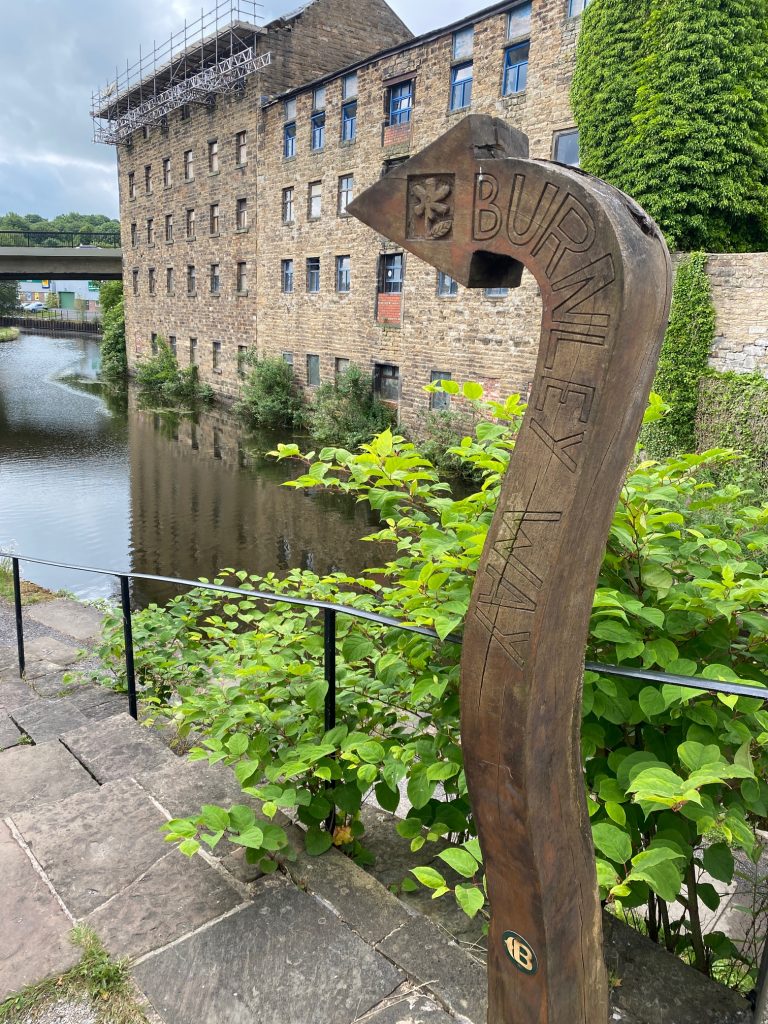 Joining the Leeds Liverpool canal to exit Burnley via the Weavers Triangle.

The Stage is initially an exit of the town of Burnley using the Leeds Liverpool canal but also roads. It has a fascinating history but is not always pretty. Then we head to Gawthorpe Hall, one of the premier historic houses in Lancashire. A quick optional detour through the small town of Padiham is followed by the Calder Valley and then a short climb up to pretty village of Higham.

Map of Stage 43 – Unfortunately OS maps of the Eastern Loop are not provided. However, if you e mail lancashireway@aol.com and a full GPX file of the Eastern Loop will be sent to you and this can be down loaded on to OS maps at www.osmaps.ordnancesurvey.co.uk. As an alternative you can view the interactive Map of the Stage below oand/or download the GPX file for this Stage only by following the instructions below.

Gawthorpe Hall dates back to the 14th Century and was built around a defensive Pele Tower. It was owned by the Shuttleworth family for generations.

The Stage begins at Burnley Manchester Road railway station – hopefully you will travel to Burnley by train. You can obtain connections from Manchester, Preston or Wigan and thus most of the country. If you arrive from the south/Todmorden, exit the station on to Manchester Road and turn left to the roundabout. If arriving from the North/Blackburn/Preston, then exit the station and make for the main road ahead. Turn right to the roundabout.

At the roundabout go straight on or turn left depending upon how you exit the station and down the hill towards the centre of Burnley. Cross over the road and then the canal and turn immediately right on to the canal towpath – note the distinctive Burnley Way wooden marker. Turn back on yourself under Bridge 130B and the road above and start heading in a north west direction.

The canal through Burnley is largely in a poor state of repair but with much of historical interest. We start in the area known as the Weaver’s Triangle.

The term “Weavers’ Triangle” is a modern term first used in the 1970’s to cover an area of important industrial heritage that has been highlighted, that should be preserved.It has a concentration of buildings from the days when Burnley was one of the main centres of the production of cotton cloth in the world. The photo below is of Slater Terrace with its unusual row of eleven houses above a canal-side warehouse. This is now occupied by the University and Central Lancashire, and just shows what can be achieved with investment.
The first building that we see on the canal is the Burnley Canal Toll Office where tolls were paid for taking goods such as coal and cotton along the canal. It was still in use until the 1950s!

Next is the stone warehouse at Burnley Wharfe, part of which was built in 1801. It was restored for use as a pub, offices and a Visitor Centre. Unfortunately, the pub is now boarded up and the Visitor Centre is only open at the weekend from Easter onwards.
This section of the canal was finished in 1801, which is actually 31 years since construction first began and it took another 15 years after this to complete it. It took so long mainly due to arguments between the various investors as to the best course for the canal. In particular, the Lancashire investors wanted the route to meander through Lancashire accessing as many of the important mill towns as possible. This of course added considerable cost to the construction of the canal, which did not go down well with the Yorkshire investors who wanted as direct and quick a route to the port of Liverpool as possible.

Follow the towpath for almost one mile to the Gannow tunnel. 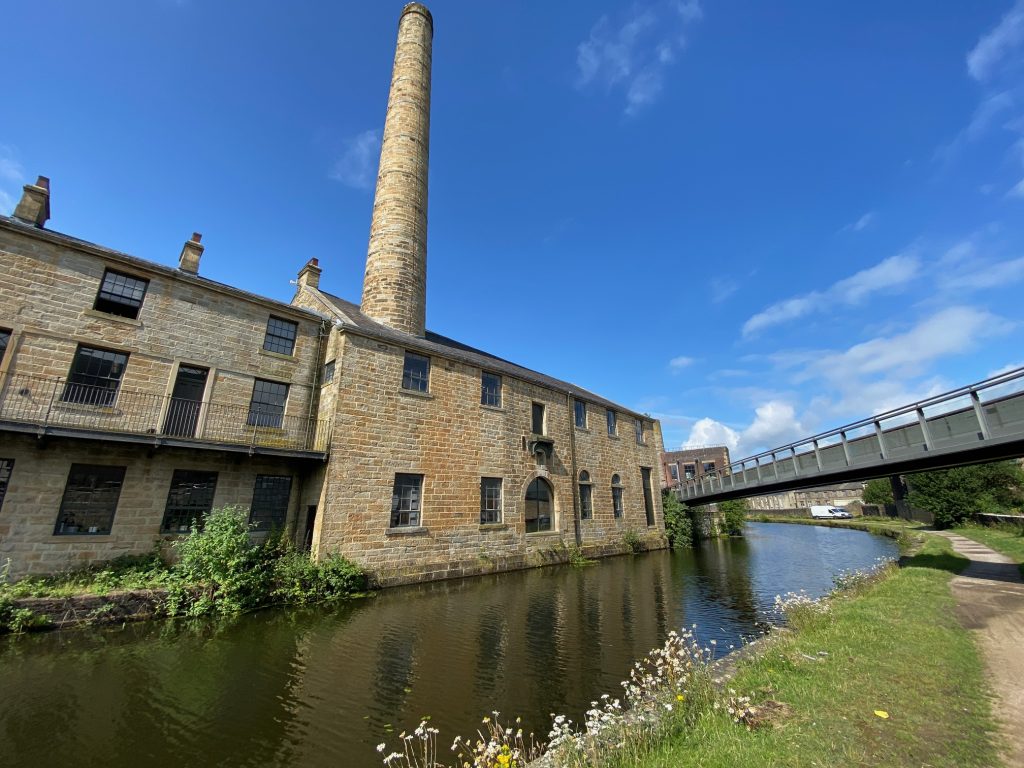 The Gannow tunnel is just over 0.5km long and forces us away from the canal through a residential area. Climb the steps and follow the cycle route to the large round about which is part of J10 of the M65. Cross the roundabout using the various pedestrian tunnels following the signs “Western Towpath”. Re-join the canal towpath and pass under the M65 and then the bridge by the Gannow Wharfe pub. At the next main bridge – Lowerhouse Lane, come off the towpath using the cobbled slope and turn right and follow Lowerhouse Lane. At the Lanes End pub continue in the same direction on to Kiddrow Lane and follow this to the T junction with the A671 – Padiham Road.

Cross the road, turn right and pass the church and churchyard. Just after the bus stop look for the drive by the first property, which was probably a gate house to Gawthorpe Estate. Ignore the no entry sign. Pass through the gate posts, pass the house and then through a gate onto a track. Here you have our first view of Pendle Hill. Follow the track for around 500m to Gawthorpe Hall. 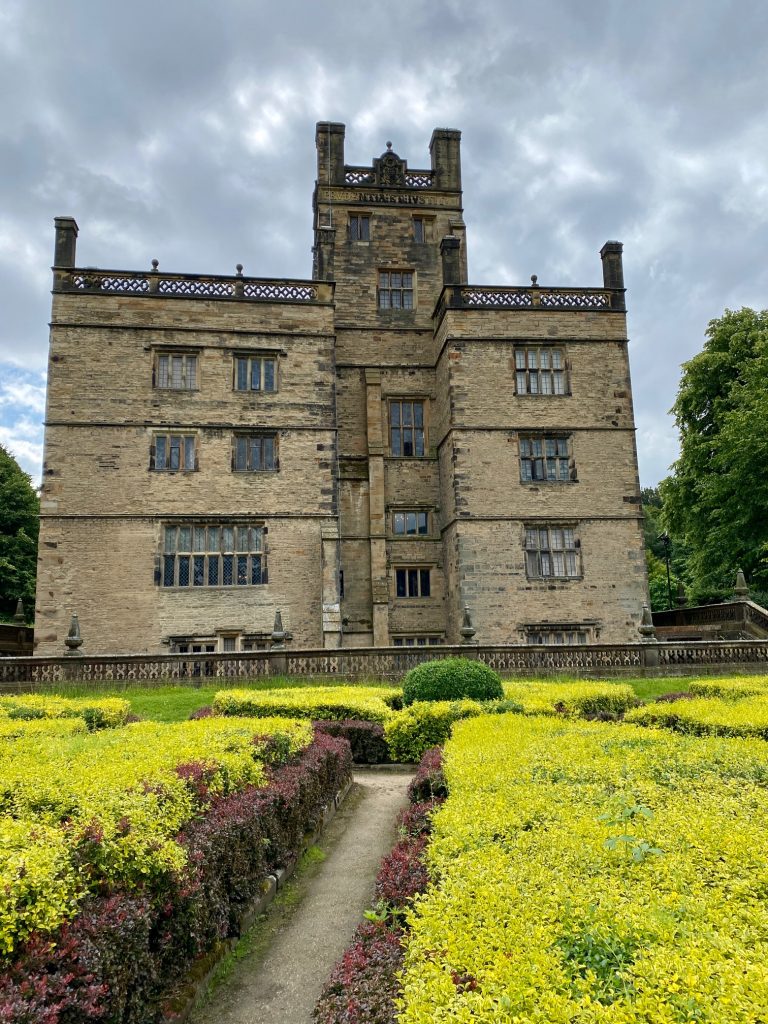 The National Trust described the hall as “an Elizabethan gem in the heart of industrial Lancashire” and I have to agree. It really is one of the highlights of Eastern Loop.

Gawthorpe Hall’s origins are in pele tower, a strong fortification built by the Shuttleworth family in the 14th century as a defence against invading Scots. The Shuttleworths occupied Shuttleworth Hall near Hapton from the 12th century.

The new Elizabethan house at Gawthorpe was built around the pele tower from plans drawn up by Richard Shuttleworth but carried out after his death by his brother the Reverend Lawrence Shuttleworth. The foundation stone was laid on 26 August 1600.

In 1604 Richard Stone, from Carr House in Bretherton, imported Irish panel boards and timber. The mottoes of the Kay-Shuttleworths are Prudentia et Justitia (Prudence and Justice – Shuttleworth) and Kynd Kynn Knawne Kepe (Kind Friends Know and Keep – Kay). Mottoes are found in the front porch and around the top of the tower. The initials KS, Kay-Shuttleworth occur in decoration throughout the house, on the front door and plaster roundels on the ceiling in the main dining

An early occupant was Colonel Richard Shuttleworth who inherited it in about 1607 from his uncle. Colonel Shuttleworth was High Sheriff for Lancashire for 1637, Member of Parliament for Preston (1640 to 1648 and 1654 to 1659) and commander of the Parliamentarian Army of the Blackburn Hundred during the Civil War. After his death Gawthorpe was leased to tenants, the Shuttleworths preferring to live at Forcett Hall near Richmond.

After Forcett was sold the Shuttleworths returned to Gawthorpe. In 1818 barrister, Robert Shuttleworth died and his daughter Janet inherited the estate at an early age. Her mother remarried and remained at Gawthorpe to protect her inheritance. In 1842 Janet married Sir James Kay of Rochdale, who adopted the surname Kay-Shuttleworth and commissioned Sir Charles Barry to carry out restoration and improvements to the house in the 1850s. Sir James was made a baronet in 1849 and served as High Sheriff of Lancashire for 1864. Charlotte Bronte, a family friend, visited the house. In 1953 Charles Kay-Shuttleworth, 4th Baron Shuttleworth, left Gawthorpe to live at Leck Hall near Kirby Lonsdale and in 1970, after the death of Rachel Kay-Shuttleworth, Gawthorpe was gifted to the national Trust.

From the Hall head towards the car park and then along Stockbridge Drive back to the A671.

Turn right, ignore the very first turning (South Drive) and then take the next right (River Drive). After about 200m take the footpath with railings to the left down past some houses to a footbridge over the River Calder. Turn right and follow the concrete track and then the concrete path initially along side the river and then it turns left away from the river ending at a small car park on Grove Lane.

Alternative – longer route. NB THE BRIDGE OVER THE RIVER CALDER AND THE ADJACENT FOOTBRIDGE ARE CURRENTLY INDEFINETLY CLOSED. IF YOU WISH TO EXPLORE PADIHAM THEN I SUGGEST THAT YOU JUST WALK DOWN THE A671 AFTER GAWTHORPE HALL AND THEN RETURN ALONG THE RIVER JUST AFTER THE TOWN HALL AND THE TESCO STORE. This detour of about 1.5 mile takes in parts of Padiham, which is a typical small east Lancashire town. It is not pretty England but true grit Lancashire, with some unique properties. Turn left, cross the road and take the second road on the right – Shakespeare Street. Follow the street cross the first road and on to the Padiham Greenway. Turn right and follow for about half a kilometre. Bear left when the path splits and then head over the bridge over the River Calder. Then bear right into Padiham Memorial Park making your way to the top right-hand corner of the park, which exits on to the main road via an impressive war Memorial. Turn right, pass the Nazareth Unitarian Church and then downhill along the main street of Padiham – Church Street. Note some of the buildings. Come off Church Street temporarily using Mill Street. Then back on to Church Street passing the Town Hall and continue to the bridge back over the River Calder. Just before the bridge look out for the path on the left, which follows the river bank up stream. Pass the footbridge on your right, which is where we re-join the shorter route. Continue along the riverside path and then turn left away from the river ending at the small car park on Grove lane.

Back on the main route – Turn right and follow Grove Lane for about a mile. Come off the lane when you come to a stone wall, which marks the entrance to the farm called Pendle Hall. Pass through the gate stile and on to another just before the large footbridge over the Calder. We will now JOIN THE PENDLE WAY. Pass through the gate stile and then take the gate stile on your left to pass into the adjacent field. Follow the path up the field along side the boundary hedge and wall to two large metal gates with stile gates. Pass through both and continue up hill. Pass through three more gate/stile combinations and then through a fourth on to Foxen Dole Lane. Ignore the path which follows the lane on your right – it can be overgrown. The lane is a public right of way. Continue up the lane and then when you come to an entrance to a property on your right take the stile on your left into the adjacent field. Bear right and follow the path to the top of the field, where you will find a stile gate and steps down to the main road. Cross over the main road turn left and then after 75m turn right and take the steps up to a path which passes through properties and exits into the centre of the village of Higham with the Village Hall opposite and St John the Evangelist Church. Cross the road to the bench, notice board and also an excellent information board regarding the village. If you have time turn left and explore the village – you need only walk five minutes to take in both the graveyard of a Chapel and the Four Alls Inn if you need refreshments. 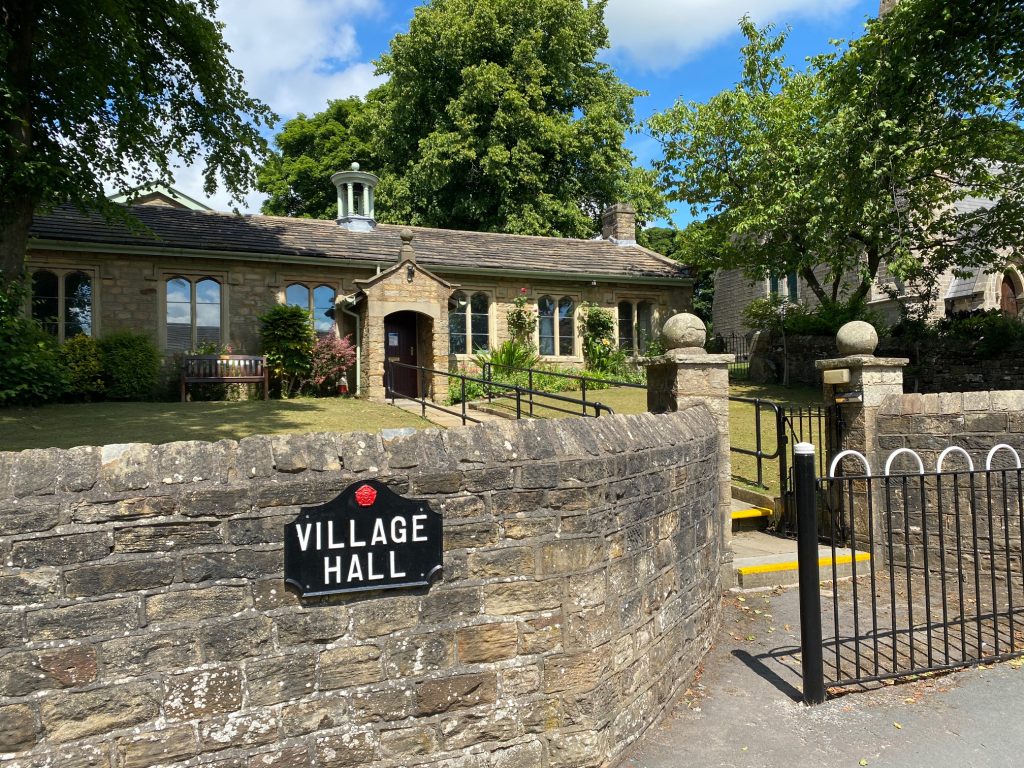