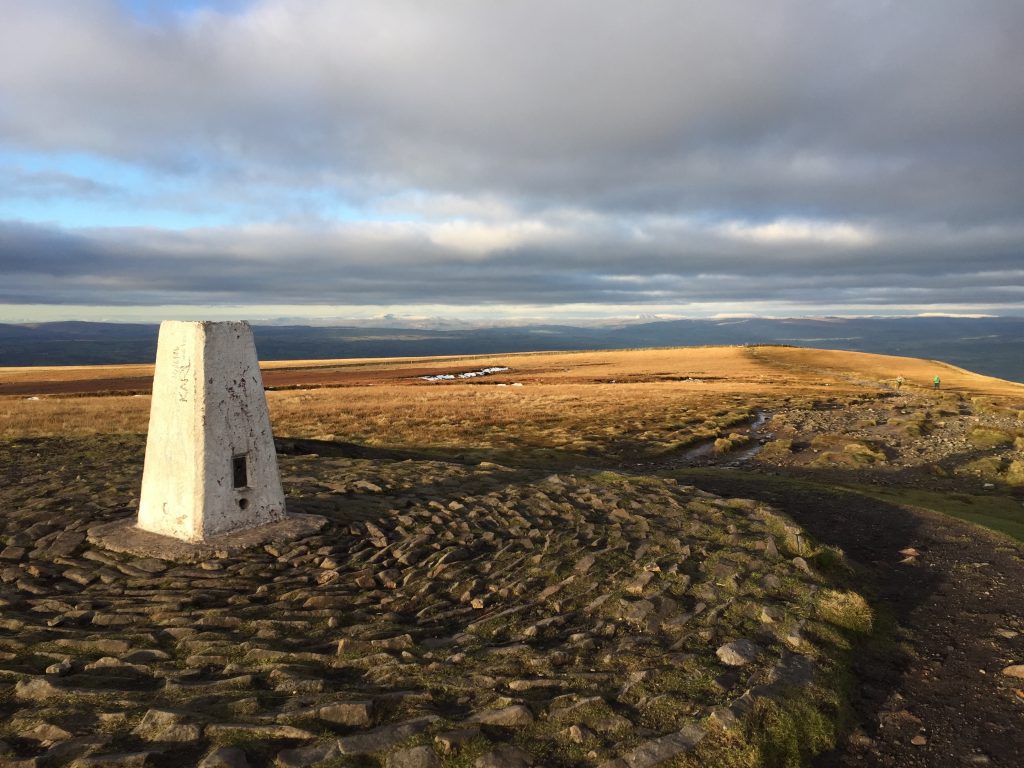 The summit of Pendle Hill

One of the best days on the entire Way as we finally climb Pendle Hill itself. At 557m (1,827ft) this is the highest point of the walk so far and therefore a great vantage point to survey all around –weather permitting!! There then follows a steep descent down into the village of Downham – one of the most beautiful villages in England in my opinion!

A map of Stage 21 can be found below courtesy of Ordnance Survey maps. You can subscribe yourself using this link, https://osmaps.ordnancesurvey.co.uk, which will enable you to import the GPX file which can be downloaded below.

From the Barley Mow pub head south along the road, past the Pendle Inn, back towards the Barley Village Hall. Take the lane called Barley Green on your right, just after the junction of two main roads – the left one takes you back to the village car park.

Continue along Barley Green past the Nelson Waterworks building, which is currently being renovated into a series of apartments. After a short climb we reach the beginning of the Lower Ogden Reservoir with its grassy-banked wall holding back the many millions of gallons of water.

We have now just joined the Pendle Way again and will follow it to the top of Pendle Hill. 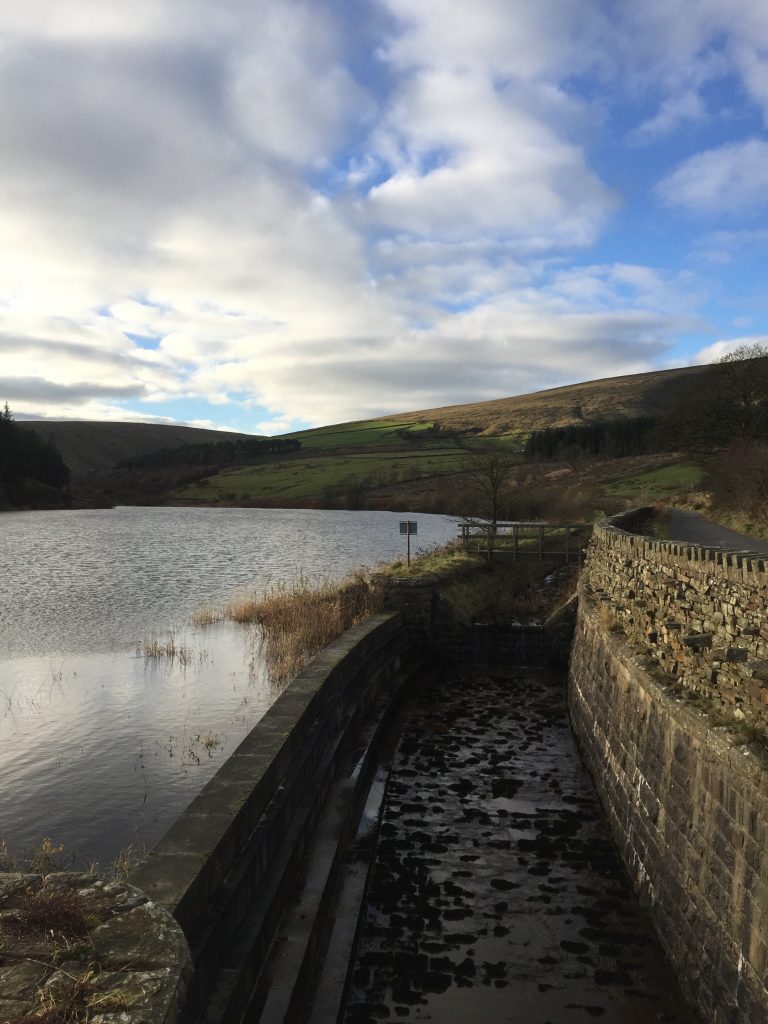 The Ogden Reservoir with overflow channel

Continue along the lane along the side of the reservoir and then through open country for a short while, heading towards the Upper Ogden Reservoirs with its retaining wall. Just before this ignore the track which bears right but follow the less distinct track to the bottom of the reservoir wall. Climb up the side of the retaining wall to the top where we meet the Way for those who did not take the detour into Barley. 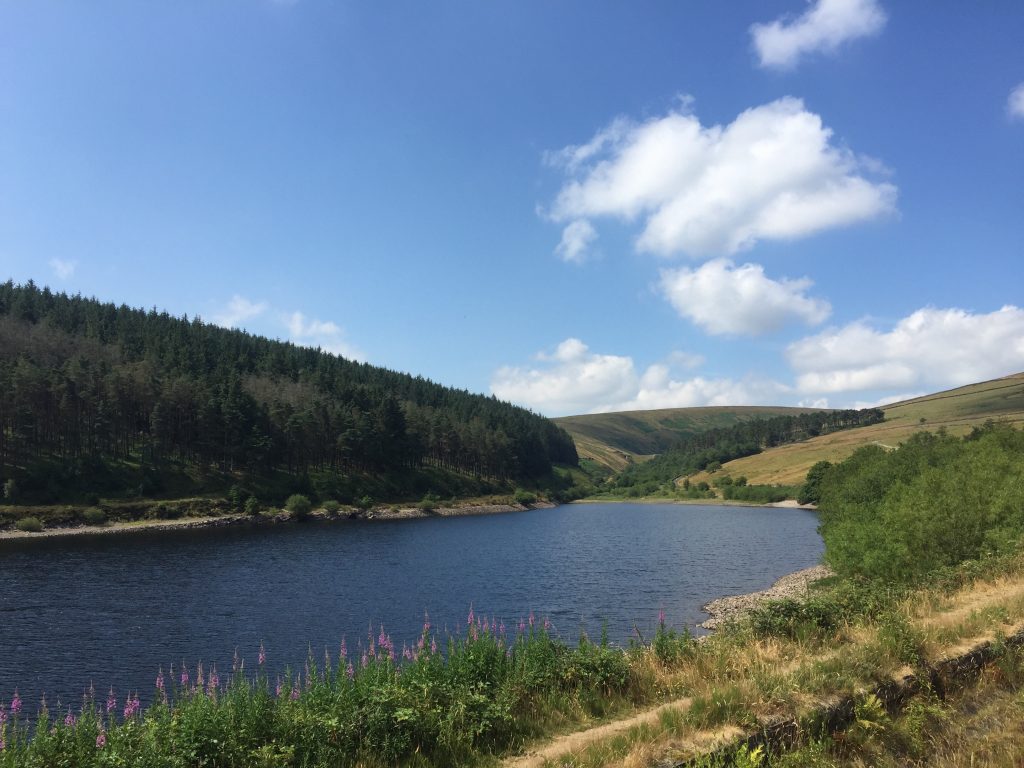 The Ogden Reservoir in summer

Follow the path besides the reservoir making your way up the valley. Pass through the first gate, which is about half way along the reservoir and takes us into a newly planted area. Before long you will see a new seat in the memory of Ali – lets us remember Ali and indeed all those who grace their favourite place with a bench or similar to allow another walker some rest and the same view as our dearly departed friend.

Pass through another gate just after the end of the reservoir and then at the next gate look for the Pendle Way marker stone in the ground. This directs you to bear right and climb the slope for about 30m before it then continues up the valley but largely keeping to the contours. After a short while the path descends to a stream, which is running down the hillside to the right. Cross over the stream and you are presented with two paths. Take the right hand one, which runs at 90 degrees directly up the side of the valley. This path is clearly marked by another Pendle Way stone marker. The path is steep initially and follows Boar Clough and its stream up hill. The path is generally very obvious to the summit and is well marked by numerous cairns. Points to watch out for, particularly if the conditions are poor, are

Have a well deserved rest!!

The Fifty Mile Route joins Stage 21 at this point.

So please follow the instructions below from the summit down to the village of Downham. 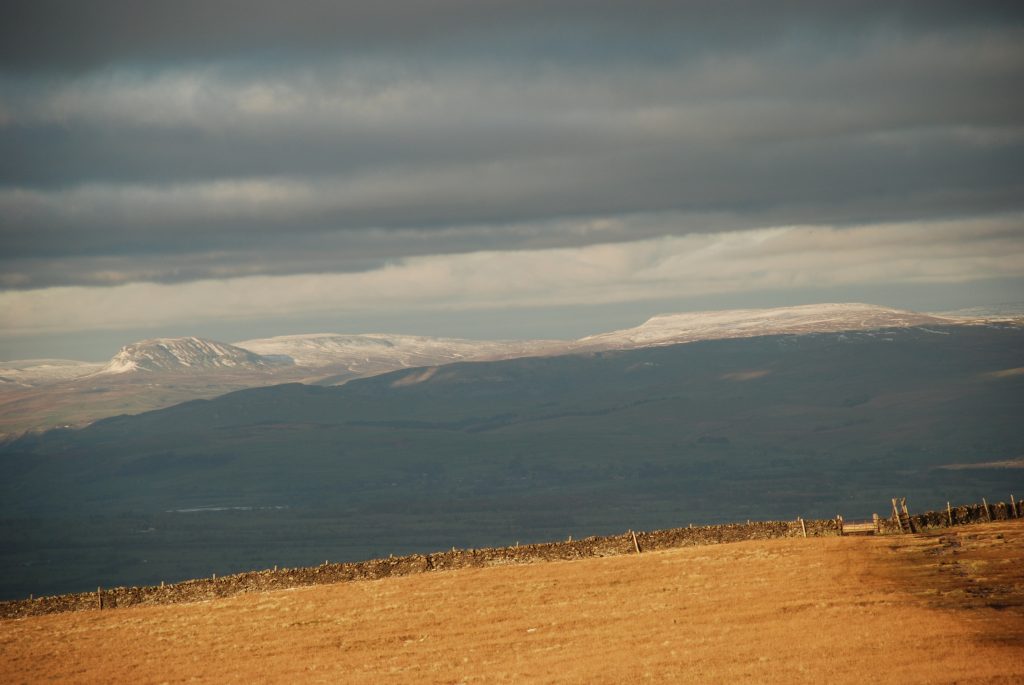 From the summit continue in the same northerly direction until you reach a wall. Cross the wall and follow the path, which continues slightly to the left of your previous direction but is virtually straight on. Do not take the path to the left.

Shortly you will reach the edge of the plateau and begin a steep decent of the hillside in a NW direction. Before descending take a good look of the Ribble valley below. You can see the remarkable geology, which the valley reveals, and the changes in rocks, which greatly affect the landscape.

THE GEOLOGY OF THE RIBBLE VALLEY

This is a good point to observe the geology of the Ribble Valley as we look across the valley from the summit of Pendle Hill. The structure is know as an anticline – the rocks have been gently folded into a dome which, together with the erosion of rivers and glaciers, exposes the younger Lower Carboniferous Limestones in the valley bottom. The tops of the hills such as Pendle Hill, Easington/Grindleton Fell and then the Bowland Fells are all topped by Millstones grits which typify the Middle Carboniferous geological period. When we descend from Pendle Hill we gradually walk down the geological sequence onto older and older rocks.

The path then heads directly north across the boggy turf, down the side of the Hookcliffe Plantation to the road at Lane End. Note that the gradient is steep again in this last section of the path as this area is made up of another series of harder rocks but in this case older Pendleside Limestone. The boggy and peaty land then turns into rich green pasture, which reflects the predominance of calcium rich limestones and mudstones, which support the richer farmlands in the valley. You should also note the numerous small rounded hills in the valley below in particular Worsaw Hill to the south of Downham. These are actually the remains of reef type structures (similar to the likes of the great barrier reef but not so extensive), which developed in the early Carboniferous seas. The sea occupied a basin in this area between exposed highland to the north and south. This is the Ribblesdale basin, which becomes the Craven basin to the northwest, which has a much thicker set of limestones, which typifies the Yorkshire Dales including Malham Cove.

Cross the road and directly opposite there is a kissing gate. Pass through this into a small wooden area with a stepped path. Exit the wood using the stile into a small “dip” in the landscaper  Turn left up the short slope of the dip towards an old farm building. on approaching this barn turn right and use the stile to enter into the field. The path then follows the right edge of the field down to a stone sale into another field which ends outside a lane which services Clay House. Cross the lane and follow the continuation of the path, which continues almost straight on in the same direction through more fields. The path is largely fenced to your left with a wood to your right. When you stop descending and you join the field through which Downham Beck flows, head to the beck and follow the stream towards the cottages, which mark the southern part of Downham village. Pass the cottages and join the main road, which passes up through the village.

At the bridge where the road crosses over the river you will see signs for information and parking which also has public toilets. I encourage you to utilize the toilets as they are of an interesting design and there is a brief history about Downham and the Local manor family. 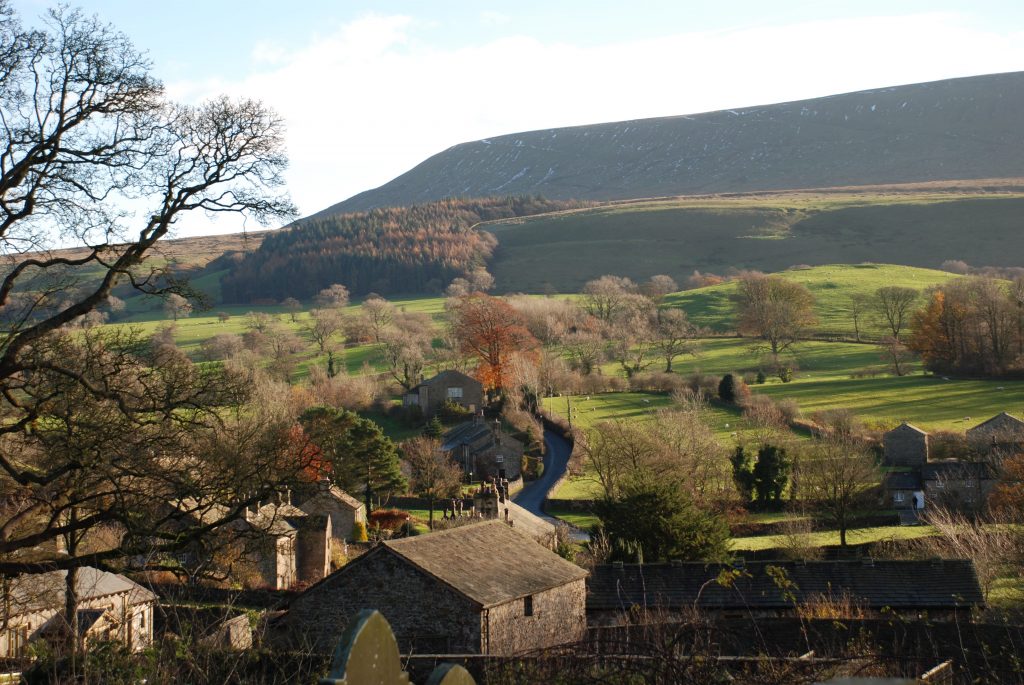 The village of Downham looking back to Pendle Hill

Downham is reputed to be the prettiest village in Lancashire and it certainly is one of the best in my own personal view. Its beauty is a product of its position in the rich Ribble valley standing on a limestone ridge and overlooked by Pendle Hill. It also derives from its unspoilt and natural appearance with strong controls over buildings including TV aerials/satellite dishes and signage being applied by the Assheton family, as all of the properties are owned by Lord Clitheroe. The Assheton family has owned the manor since 1558.

The origins of the village go back much further. It is sited near two key historic roads – the main Roman road from Ribchester to Ilkley and York crosses on the ridge just to the north and there is another older road to the south which is thought to be the old Irish Gold route, which may have been followed by the Romans.

As well as a constant flow of tourists and walkers the village is attractive to film makers because of the lack of apparent modernity. The absence of aerials makes it ideal for historical drama and many films have been shot in the village and its surroundings. Most recently the production ‘Born and Bred’ was filmed in Downham between 2001 and 2003. At an earlier date a shot from ‘Wuthering Heights’ was taken on church brow and other films have been made here. One of the most famous films was the 1961 ‘Whistle Down the Wind’ starring Hayley Mills and Alan Bates, shot largely at Worsaw End Farm and including local children from Downham and Chatburn schools in the roles of many of the children in the film. 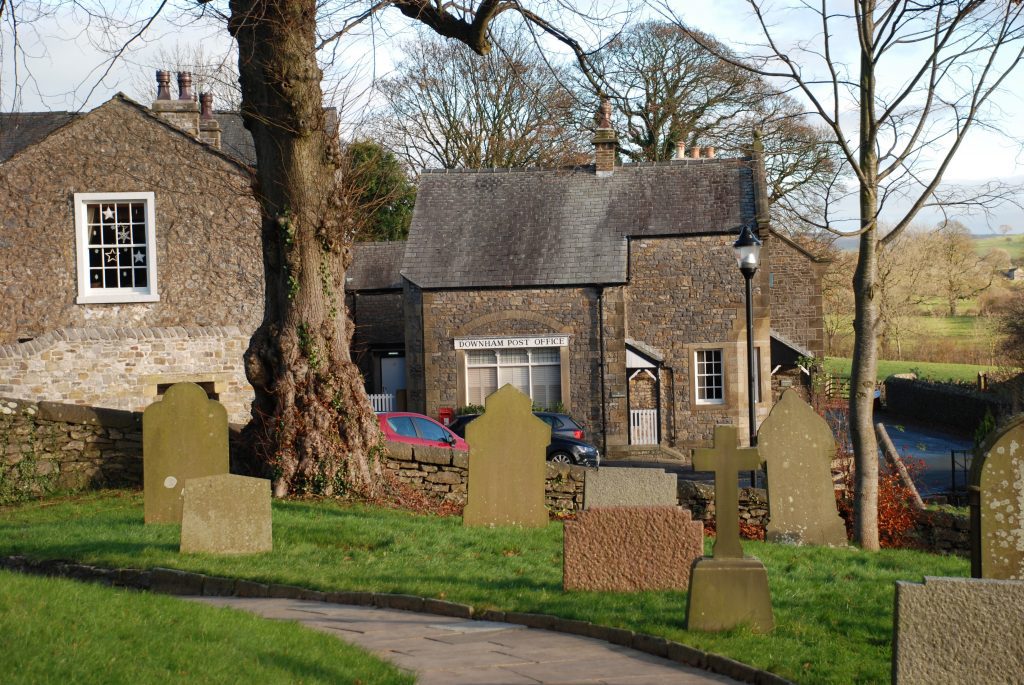 The Stage ends at the Assheton Arms which is at the top of the village on the right hand side opposite the Church.

Accommodation is available in the village of Downham at the Assheton Arms, although it is popular and not inexpensive but a real treat. The alternative is to walk on to Sawley and stay at the Spread Eagle or continue on to Grindleton (Stage 22 end) and look at the accommodation options on that Stage.

Click here to go to the Fifty Mile Route

Complete Stage 21. Then from Downham take the footpath past Worsaw Hill. Join the road and then take the bridleway past Mearley Hall to Pendleton. From Pendleton you can climb to the Nick of Pendle and then return to Barley via the second half of Stage 20. The total distance is 16 miles.

A shorter alternative involves retracing your steps to Lane Head and then rather than climbing over Pendle Hill again, follow the road back into Barley. There is an obvious short cut avoiding the Pendle Road across Great Coppy but the path is not great – the choice is yours!