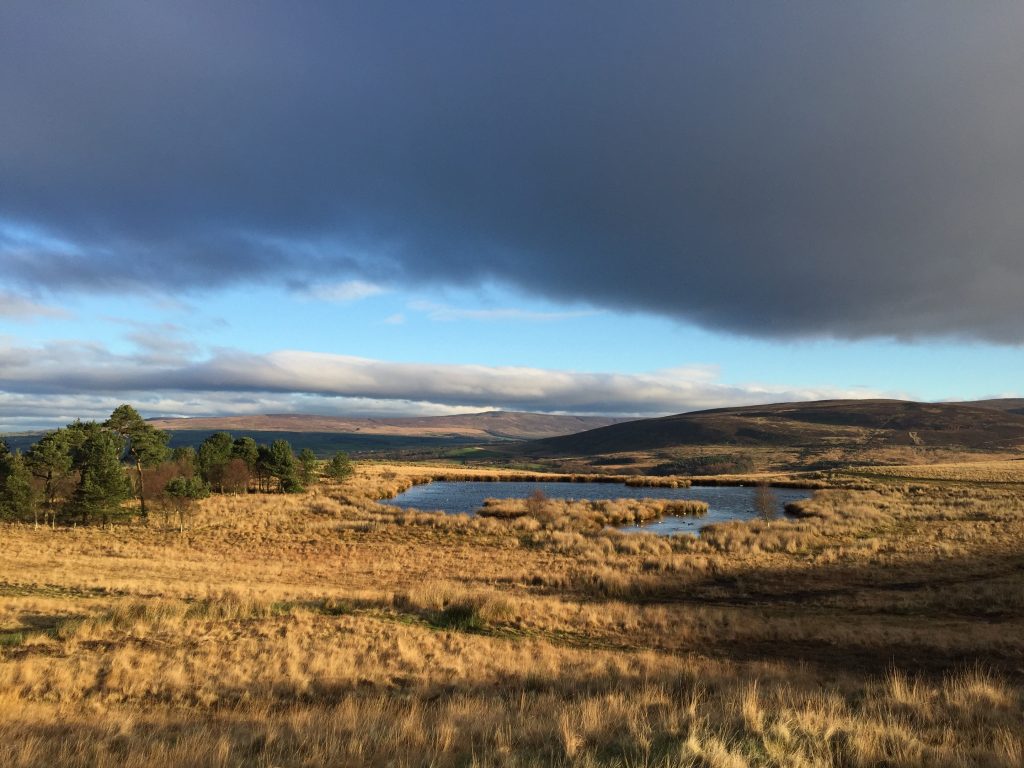 The view north from Nicky Nook towards Ward’s Stone

A great stage, with pretty villages at the start and the end Between these there is a climb up and along the edges of the Bowland Fells, including the summit with the enigmatic name of Nicky Nook.

A map of Stage 31 can be found below and a GPX file of the route downloaded using the link below.

Originally this Stage and the following one were combined into one. However, it has now been divided into two to give a little more flexibility and potentially ending the day in Dolphinholme rather than continuing on to Abbeystead. Also the Stage initially was to follow the Wyre Way all the way from Scorton to Abbeystead but this would have missed the summit of Nicky Nook and the views along much of the initial section. I trust that you find detour worthwhile.

The stage begins in the centre of Scorton at the cross roads, where there is a well stocked Spar shop to take in provisions for the day. Find Snowhill Lane, which runs east out of the village past the Priory pub/hotel. Follow the lane up hill past the church and over the M6 motorway. Continue for another few hundred meters when you come to a cross roads of sorts. This marks the entrance to the Wyresdale Park Estate. Turn right and follow the public road up hill.

At the T-junction turn left and look out for, on the opposite side of the road, the beginning of the path up to the top of Nicky Nook – 215m high. It is very well signposted. The ascent up to the summit is steep but is helped initially by a well laid gravely path with steps in the steeper parts. Continue in roughly the same direction to the trig point, with its prominent red rose, which marks the top of the intriguingly named hill. 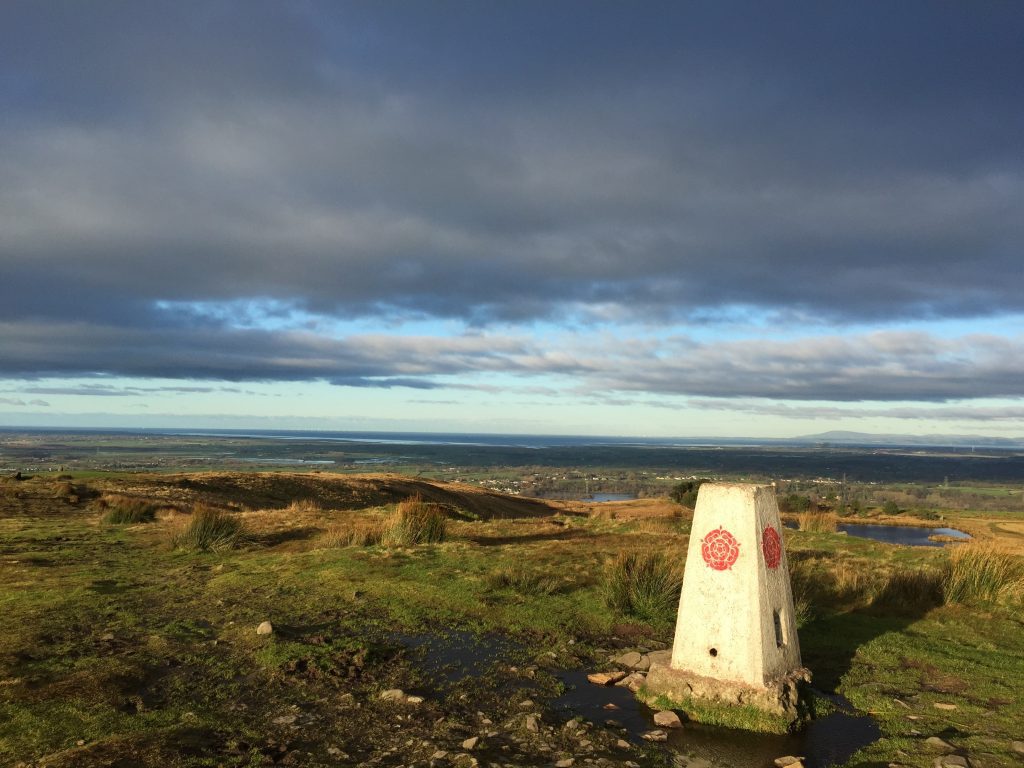 The summit of Nicky Nook with its appropriately decorated trig point

Take in the great views to the west to the coast with Heysham Nuclear Power Station being the closest prominent landmark. On a good day you can see the shipyard at Barrow and the huge wind farm in the Irish Sea as well as the Lakeland Fells. 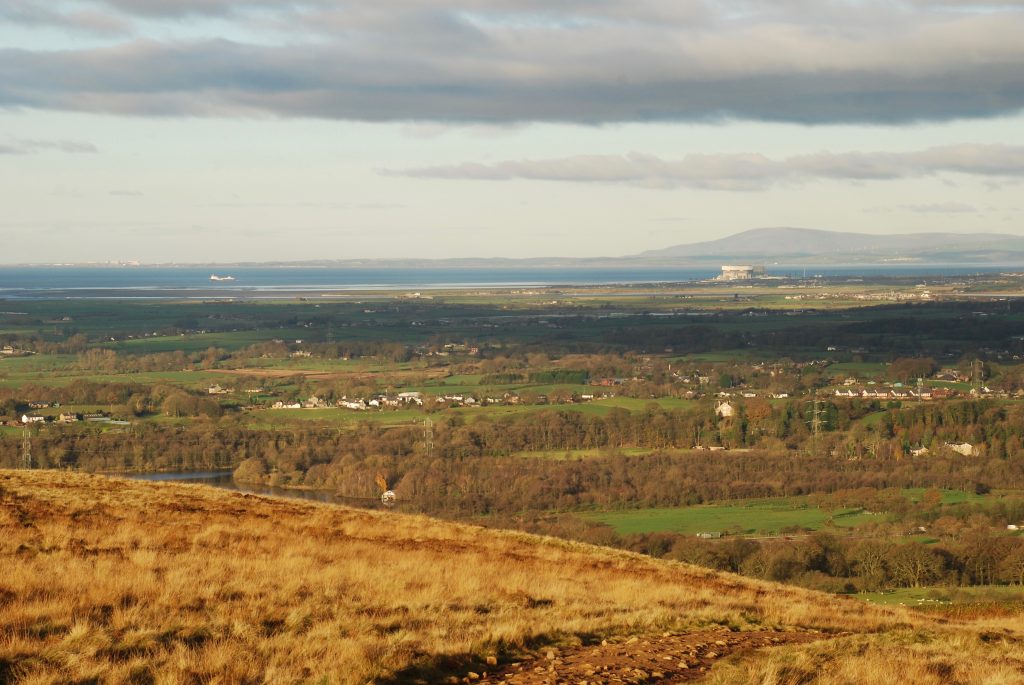 The view to the coast from Nicky Nook

From the top continue in the same direction until the path splits. Bear right – do not go straight on through a pedestrian metal gate in the stone wall opposite. Follow the gravely and sometimes steep path down to the bottom of the hill and use the stone stile over the wall at the bottom and steps to descend on to a track by the side of Grizedale Reservoir.

Turn left and follow the track north. Just after the water ceases you will come upon a signpost and at this point we need to turn right and follow the concessionary path through the woods to Grizedale Bridge. The track becomes a path, which is generally decent with many duckboards covering the muddier parts.

Exit the woods to find another three-way signpost. Bear slightly right and then continue towards Grizedale Bridge, passing through two wooden gates and then one metal one. The path ends at the public road. Turn left and follow the road for about 1km. At this point there is a public footpath signpost on the left and on the right is another sign welcoming you to public access land. Turn off the road and follow the path on the right, which makes its way across the contours of Harrisend Fell in a NNE direction away from the road.

Whilst the path we take is not majorly used its route is clear along the moorland fell. We pass an immaculately built tiered cairn and then the path is less distinct as it crosses boggy land but there are a couple of way marker posts to guide you. We then reach the top corner of a green field and Foxhouses Brook. At this point turn left and follow the indistinct track along the brook in a NW direction. This then becomes a track, which ends at a lane, which heads towards the impressive property called Lane Head. Turn left and follow the lane down to the public road.

Turn left and follow the road. When this roads bend through ninety degrees to the left, carry straight on/bear right and head down into Street. At Street Cottage we come to a cross roads – carry straight on to Street Bridge, which crosses over the River Wyre.

Finally, after my hopefully worthwhile detour, we can follow the Wyre Way for some time. Immediately after the bridge take the gate on the right into the field. Follow the path, which meanders around the edge of the field with the river just on your right. Exit the field by a gate and cross over the track, which is private and heads off to Wyreside Hall on the other side of the river valley.

Use the gate opposite to enter the next field and follow the field boundary to the top of the slope. Pass through a gate into a small coppice, cross over the footbridge and then follow the path to the track. Turn right and follow the track past the pretty and compact Keepers Cottage on to the farm (Coreless Mill on the OS map). Head towards the final building and use the white wooden gate on the right of the property to enter the field behind.

Head straight on, perhaps slightly left, to the point where the field is “pinched” by the woods on the left and the river meander on the right. Use the pedestrian gate to enter the woods. The path then heads north and follows a stone wall, which marks the boundary with a field to your right. This ends at a bend in the river and the path then turns left through some trees around the back of a sewage plant and then deposits you on to the road through Dolphinholme by the old mill – now a series of residential properties. 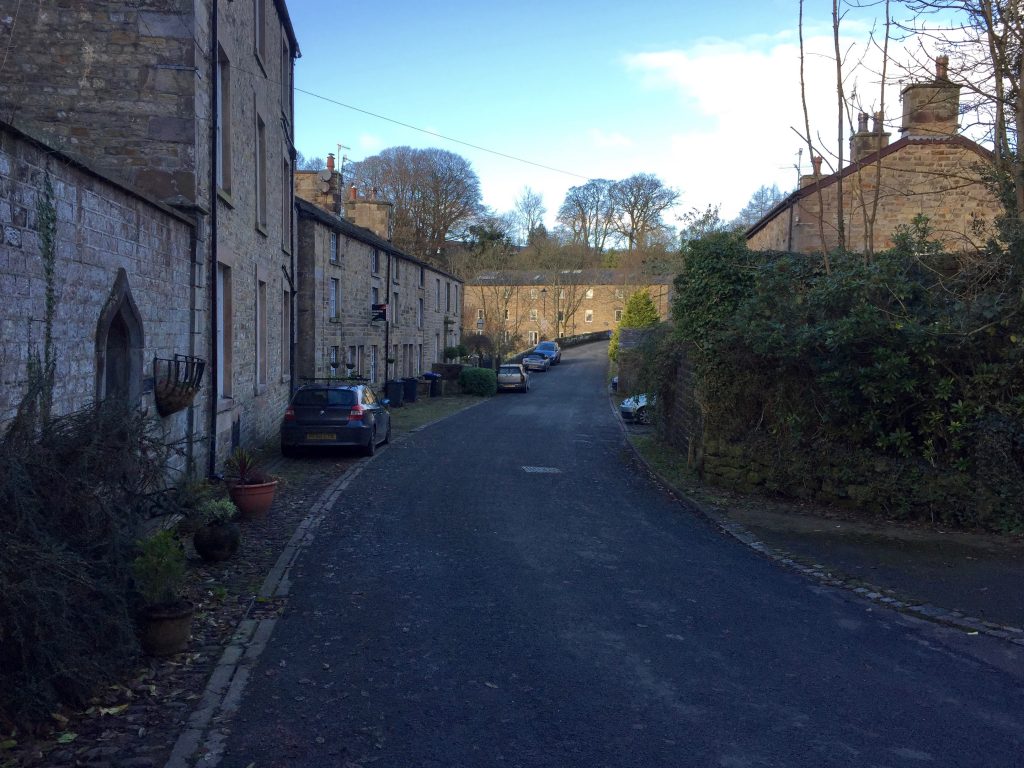 The village of Dolphinholme with the mill in the background

Turn right onto the road and the stage ends on the bridge over the River Wyre.

The nearest overnight accommodation is the Fleece Inn about 1km out of Dolphinholme.

There are three options depending upon the amount of distance you wish to cover.

If you want to complete both This stages and the next in one walk, which is 10 miles long, you should start the return to Scorton via the road that heads south out of Abbeystead by the car park next to the river. At the top of the hill at the junction turn right and follow this road back in the direction of  Street. Whilst it is road walking there are great views of the Bowland fells especially Hawthornthwaite and Grizedale Fells, which rise impressively on your left. There is also little traffic and I did consider routing the actual Way via this road. On your descent towards Street you have two options. Return to the River Wyre at Street and then follow the Wyre Way back to the start in Scorton. Alternatively where you turn off this road towards Street (GR 527 517) bear left instead and follow what becomes Long Lane and then pick up the cycle lane which goes past Wyresdale Park and back on to Snowhill Lane. The route back is just over 7 miles or 8 miles via the Wyre Way – so a good days walk.

If you want a shorter walk- complete the first half of Stage 31 by following the route from Scorton to Street and then return via the Wyre Way. The total distance is 8.5 miles.

The second half can be completed by begining in Street and complete Stage 31. Then walk Stage 32 into Abbeystead and return to Street via the moorland road described in the longer first option above. The total distance is 9.5 miles.