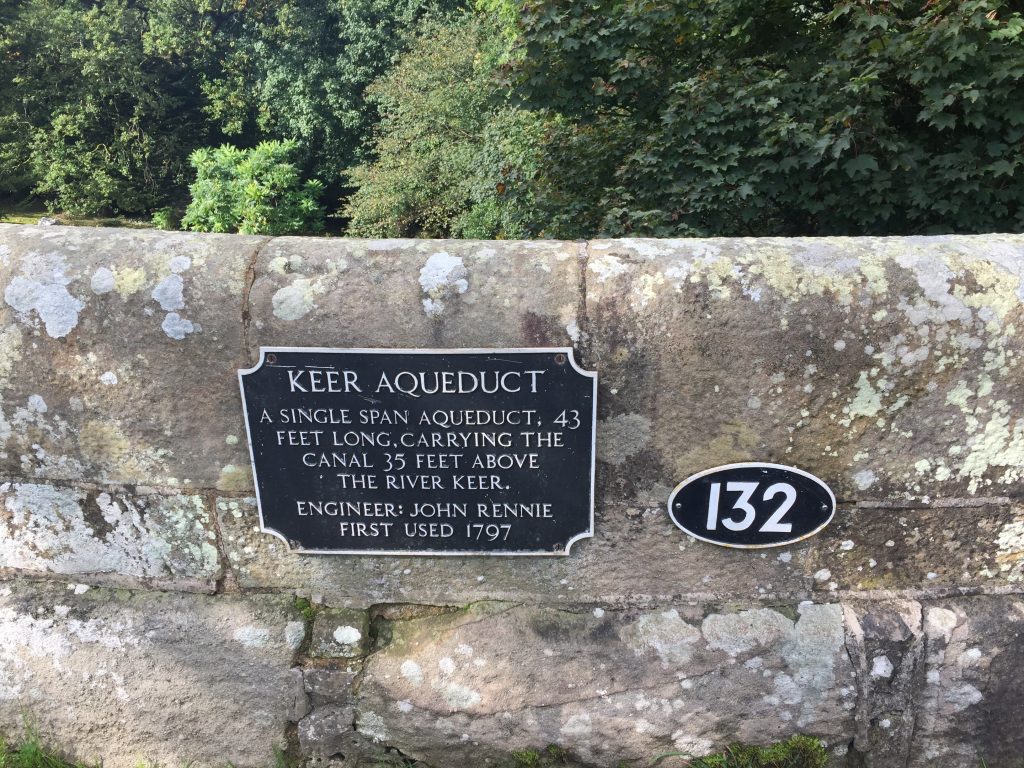 Another Rennie Aqueduct – this time over the River Keer, which we will see again in a later Stage

STAGE 38 – OVER KELLETT TO TEWITFIELD

A short stage with rolling hills and then a pretty stroll along the final section of the navigable part of the Lancaster Canal taking in the village of Borwick and ending at Tewitfield, which is the end of the current canal and offers some over night accommodation.

A map of Stage 38 can be found below courtesy of Ordnance Survey maps. You can subscribe yourself using this link, https://osmaps.ordnancesurvey.co.uk, which will enable you to import the GPX file which can be downloaded below.

The stage begins at the Village Store in Over Kellett– hopefully you have stocked up for the next stage?

Turn right and head through the village in an easterly direction. We then need to take a footpath on the left, which follows track between Cockle Hill Barn and Yew Tree House. Then follow the path which arcs around to the right and then joins up with a path with hedges on either side.

At the end of the path is a stile, which takes you into a field. Continue straight on in the same direction towards the wooded area. There are footpath marker posts in the field to guide you. Use the old metal ladder stile to cross the wall into the woods. Turn left and follow the path, which initially follows the stonewall on your left and then bears right to enter a field.

Look out for another footpath marker post and continue up the slope keeping roughly parallel with the caravan park boundary on your right. Find the metal pedestrian gate next to a large gate to enter the next field at the top of the slope.

Head straight on in the direction of the end of the substantial wooded area on your right. There is then a fence, which separates our field from the next. The stile into this field is almost next to the boundary with the woods. Cross into the next field and follow the boundary with the woods initially straight on and then right until you exit on to the tarmacked road that services Old Hall Caravan Park. The footpath does not then follow this to the main road but exits into the field opposite and then turns left to the road.

On the road turn left. Pass Old Capernwray Hall and then take the immediate right to the canal. Do not take the road on the right hand side of the canal towards New England Caravan Park but cross the Canal Bridge and then turn right on to the towpath of the Lancaster Canal.

Turn right off the road we have just been following and the follow the new road in a SW direction. Follow this for just under a mile until you reach Capernwray Old Hall Farm. Turn right and head over the small bridge, which crosses the Lancaster Canal – Bridge number 131. Drop down to the towpath and proceed north on the western bank of the canal. On the opposite side is Old Hall caravan site set in lovely woodland, with remains of a limestone quarry with its own junction.

We quickly reach Bridge number 132, which is marked by a plaque, which announces this as Keer Aqueduct, which is another bridge built by John Rennie. For those who have completed the Southern Loop there is a very similar bridge at Addlington. Whilst many miles apart, this is no coincidence – both where then on the Lancaster canal and built by the same engineer. Constructed in 1797 the bridge is a modest 43 feet long and if you peer over the side you can see the River Keer, 35 feet below. Just after this is railway bridge crossing the canal, which of course post dates the canal.

Continue along the towpath heading north along this tranquil stretch of canal. The canal turns left through ninety degrees and then right again. At this point you will see houses belonging to the village of Borwick. We will briefly come off the canal bank to visit this pretty village and its Hall.

Exit the towpath at bridge number 135 on to the road and turn right and head into Borwick. 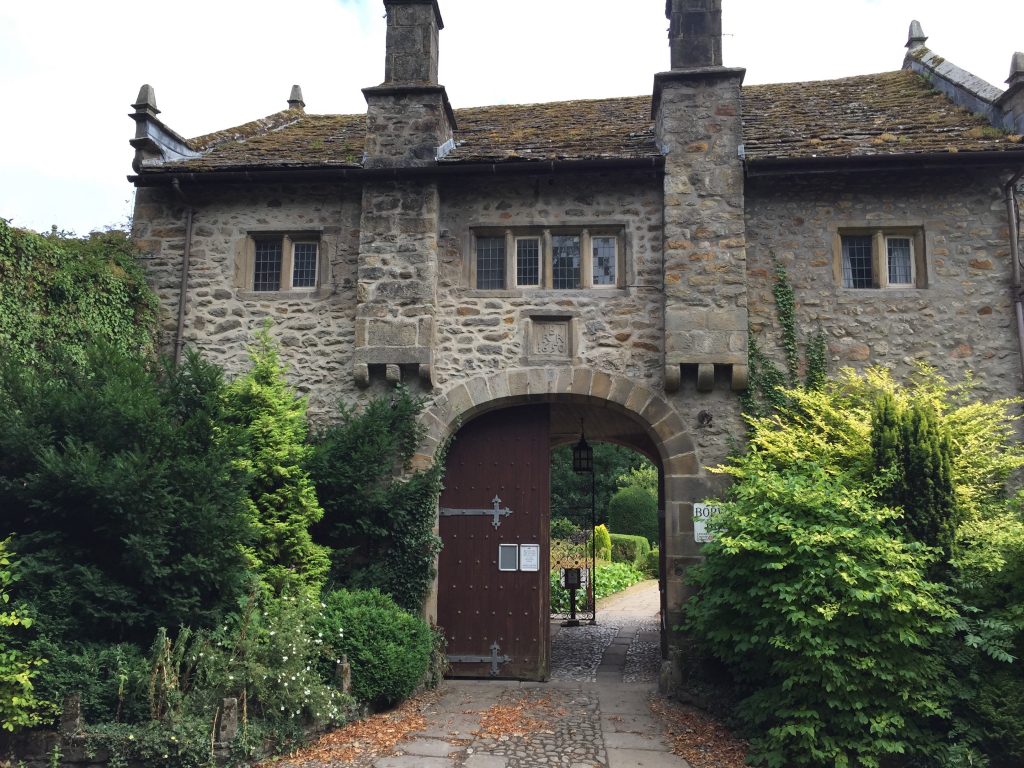 On your right is Borwick Hall – now a residential educational Centre owned by Lancashire County Council. Unfortunately there is no public access but you can peer through the large door into the gardens. The Hall dates back to the last decade of the 16th century and was owned by Sir Francis Bindloss and his family, who had descended from rich cotton merchants based in Kendal. It includes a defensive tower and chapel with a priest hole.

Continue on to the village green. Turn left and whilst still in the village look out for the lane on the left which is marked by a footpath sign and heads between a farm with a barn on the left and two white cottages on the right – Rose Thorn cottage. Follow the lane down to the bridge over the canal and return to the towpath.

Continue north. Before long the canal reaches a marina and then ends abruptly and this marks the end of the Stage.

This is Tewitfield, which is the northern most navigable point of the Lancaster Canal. The 42 mile section from Preston to this point was the first section of the canal to be opened on 22nd November 1797. Unfortunately the stretch of canal north of here was truncated by the building of the M6. There is a disused section, which we will follow shortly. There is a notice board about the “Northern Reaches”, which is the 14 mile section to Kendal, which was only completed and opened in 1819. The Lancaster Canal Trust has ambitious plans to re-open this northern section – the notice board does show how they plan to overcome the barrier that is the M6 but this involves several tunnels, bridges and culverts!

Accommodation can be found at the Longlands Inn and Cottages or the Tewitfield Marina.

This is only a small stage and will generally be combined with other stages. The shortest option is to carry on to Yealand Conyers – see Stage 39. At the point where you turn right up towards Leighton Hall and its Park, carry straight on and then into Warton via Hyning Road. You can return to Capernwray via Pine Lake and the River Keer. You may wish to start and finish in Capernwray or Borwick rather than Over Kellet.