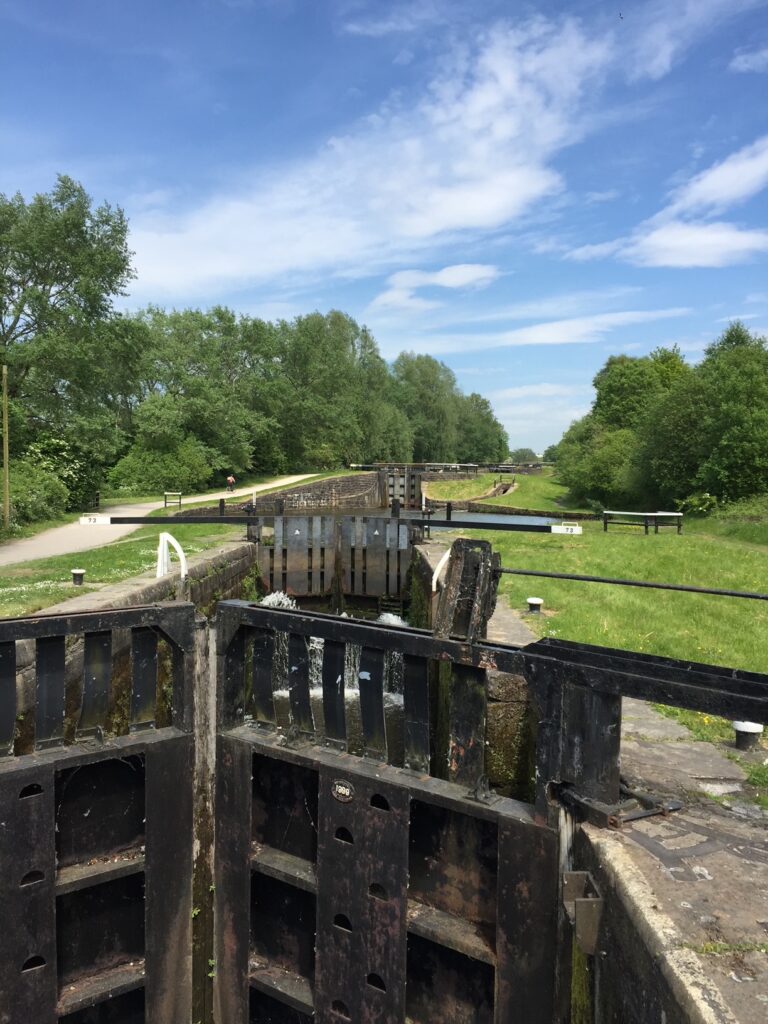 Begins with the three mile stretch of 23 locks on the Leeds Liverpool canal up to the imaginatively named Top Lock and then an amble through the pretty estate of Haigh Hall with its pub, school, cottages and stables .

A map of Stage 9 can be found below courtesy of Ordnance Survey maps. You can subscribe yourself using this link, https://osmaps.ordnancesurvey.co.uk, which will enable you to import the GPX file which can be downloaded below.

The first part of the walk is not pretty but fascinating as we travers through the industrial history of Wigan – unfortunately you will also appreciate the extent of fly tipping and litter in Britain on this part of the walk. This stretch of the Leeds Liverpool canal was the last part to be built – not unsurprisingly because of the cost of creating the 23 locks. But on finishing it connected the Liverpool to Wigan section with the end of what was then the Lancaster Canal, which was originally planned to terminate at Westhoughton/Bolton but never quite made it. The Lancaster canal joined the then end of the Leeds Liverpool canal at Johnson’s Hillock some 10 miles north, just to the north of Chorley. Initially an agreement was reached to share this stretch of the canal and eventually the whole of it was consumed into what we now know as the Leeds Liverpool canal.

Make you way back to the cobbled bridge near to the Terminus Warehouse.

This bridge is known as the Changeling bridge. This is because it allowed the horses to transfer from one side of the towpath to the other, without being unhitched, assisted by rollers. To date we have been walking along the right hand side of the canal but from here on in we will be walking on the left hand side. Descend down to the canal and under the bridge noting the replica rollers. Immediately we can see some pretty old canal buildings, which are dwarfed by the Trencherfield Mill behind. This huge brick mill was built in 1907 for William Woods & Sons Ltd but closed in the Sixties and is now largely appartments, with some offices and retail space etc. When you reach the end of the mill turn left to look at the huge steel fan, which was made in the town but recovered from a colliery. If you go a little further to the back of the mill you will find the entrance to the Mill, which still houses the huge steam engine, that drove the looms. Fortunately this 2,500hp four cyclinder engine with a 26 foot flywheel with 54 ropes powering the looms, still works but unfortunately only on Sundays at 11am and 1pm. 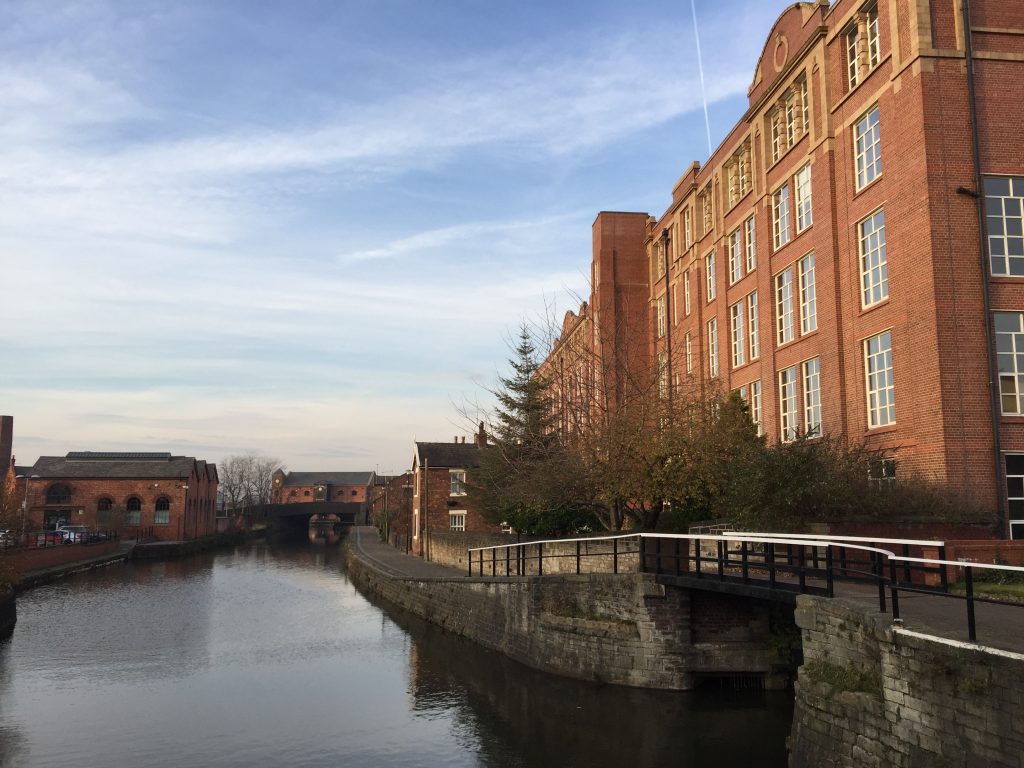 Retrace your steps back to the canal. On the opposite bank is a dry dock. When I have completed this section it has housed a typical wide cargo barge called Viktoria, which was built in the 1930. This is also the first of the 23 locks. Continue along the tow path through Wigan. After the new road bridge you will come to a pedestrian bridge that enables passage onto the other bank and access to an offshoot section of the Leeds Liverpool canal which is 7 miles long and ends in Leigh were it connects with the Bridgewater Canal and therefore Manchester. This was built in 1820 so actually is the last part of our canal! However, do not cross the bridge but continue straight on, on the left hand side of the canal as before. You will then pass under the main West coast line railway, which stops in Wigan a little north of here and then the railway line which goes to Bolton and Manchester. All of the bridges are numbered and any that have been added since the canal was built have a letter following them eg 53b. You then come across the second of the locks. If you look carefully you can see in one stone the words “L No XXII” ie Lock no 22. All the locks have such a stone. As you can see the locks are numbered from the top down to the bottom. Each lock also has another number which is the lock number on the whole of the canal beginning in Leeds. Strangely the bridges are numbered in the opposite direction ie Liverpool to Leeds. Some of the bridges are original eg the Britannia Bridge which follows. Between locks 82 and 81 ( or 18 and 17) is small junction which connected to collieries at Ince Hall and Moss Hall. At Lock no 73, there is a large slag heap on the opposite side of the canal, which is the site of the large Albion Iron works built in 1870 and run by the Wigan Coal and Canal Company. Shortly after this look out for Kirkless Hall which is in a sorry state but dates from 1663 and again was the site of another coal company. 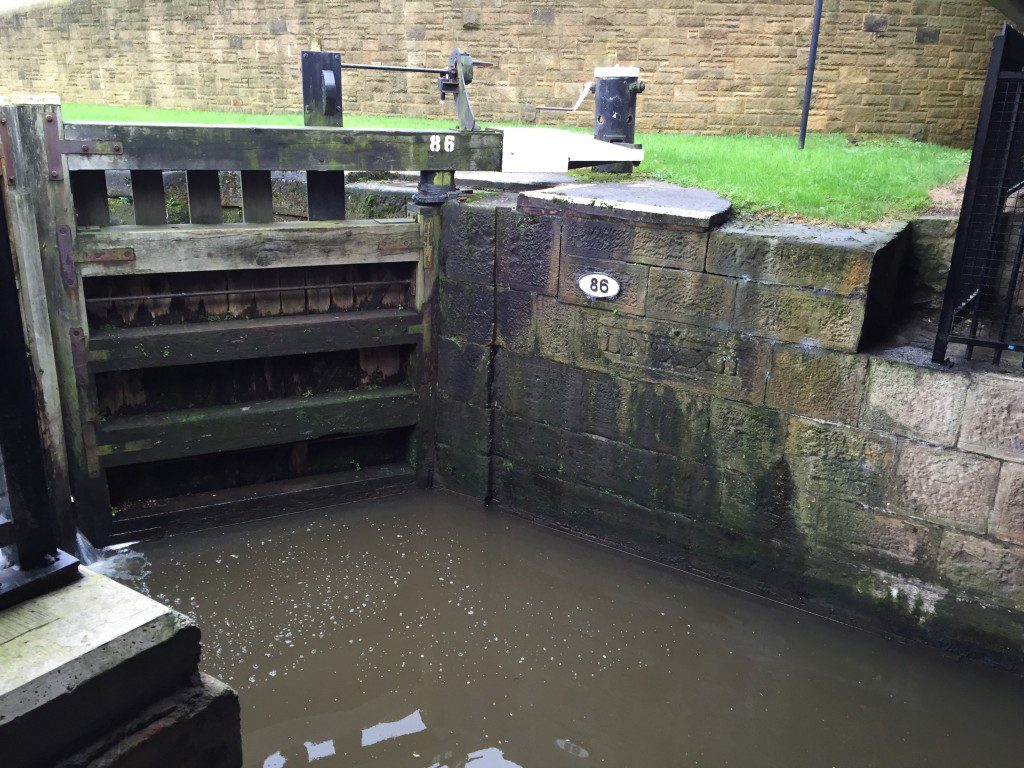 One of the locks with its Roman numeral number!

Eventually you will reach the final lock with its Keepers house. Note that bridge number 57 has the date of 1816 carved into it. You will note that the stretch of canal we have been following makes a t junction with the canal which now runs NW to SE. The SE line is not very long and can be seen to be overgrown. In fact it runs for only about 300 metres before stopping just after the bridge. This was to be the final leg of the Lancaster canal but was never completed. 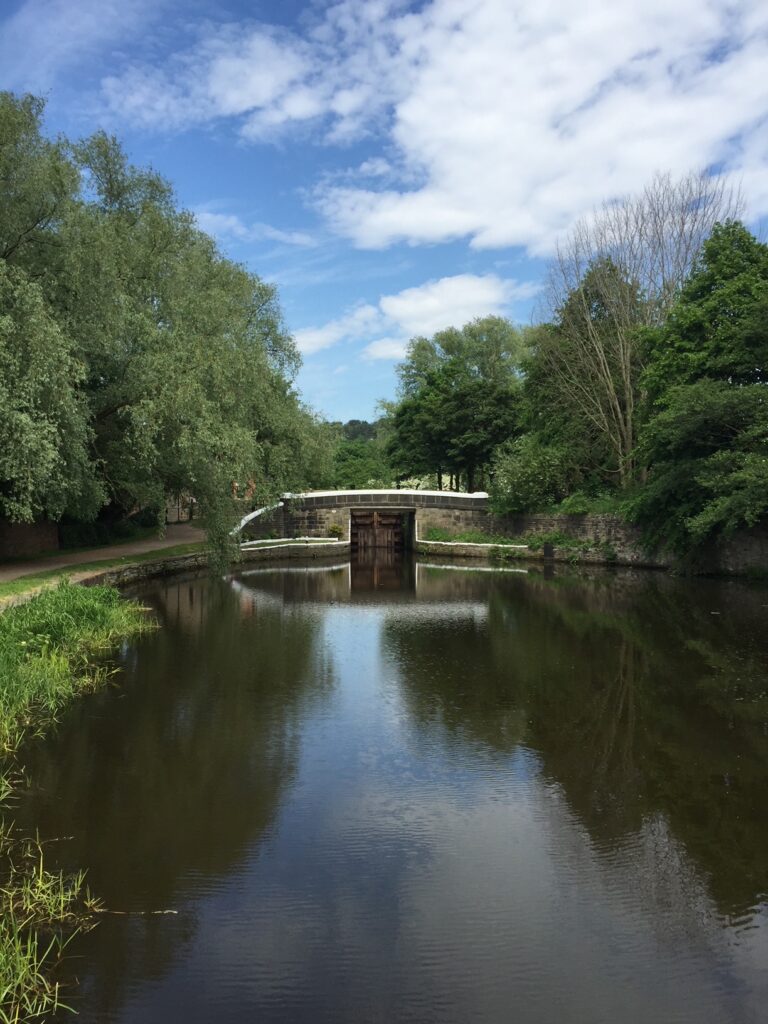 If you suddenly feel peckish at this point you may now be picking up the smell of freshly baked bread. All is revealed further on as you will come across the huge Hovis factory on your left. Follow the canal under the main road until you reach the next rather ugly looking bridge – no 59b. Use this to cross over the canal and then follow the track on the right through the woods. You are now in the Haigh Estate. When you come to a cast iron bridge ascend up to the road, turn left and then almost immediately take the track on the right. At the end of the track take the left hand of two paths and follow for a kilometer or so. The well marked path becomes a track bounded by a graveyard belonging to the church at the top of the hill – St David’s – the church of the Haigh Estate. The track ends at junction of roads with the Balcarres Arms opposite – names after the Earl of Balcarres. Behind this once stood a large Brewery – five stories high but now occupied by a second hand car garage. More of the Brewery later.

Turn left into Copperas Lane, but before that note the boundry stone opposite the entrance to the church – we are at the junction of two of the Hundreds of Lancashire – Salford and West Derby. The next building on Copperas Lane is the school dating from 1846 – another building from the Hiagh Estate. 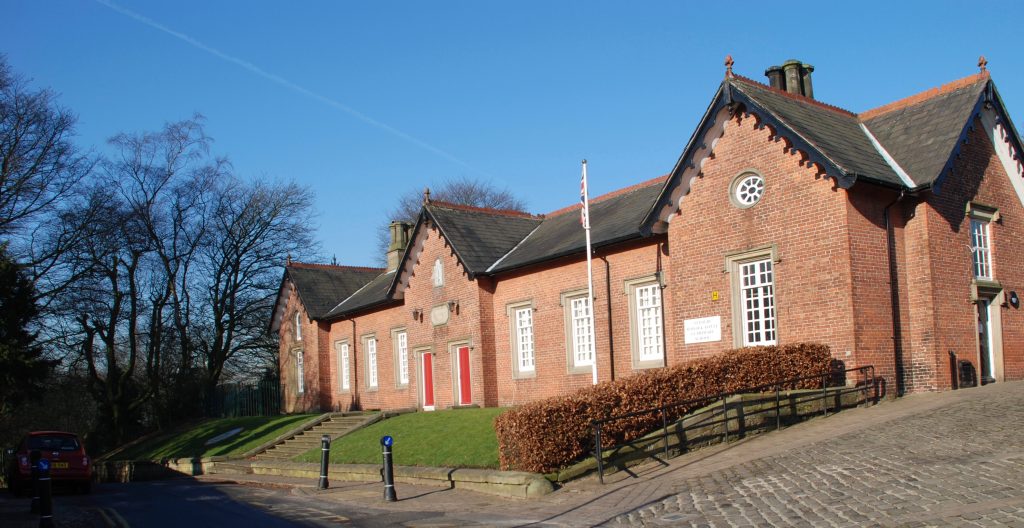 Continue down the lane and look out for a windmill in a field on the left. 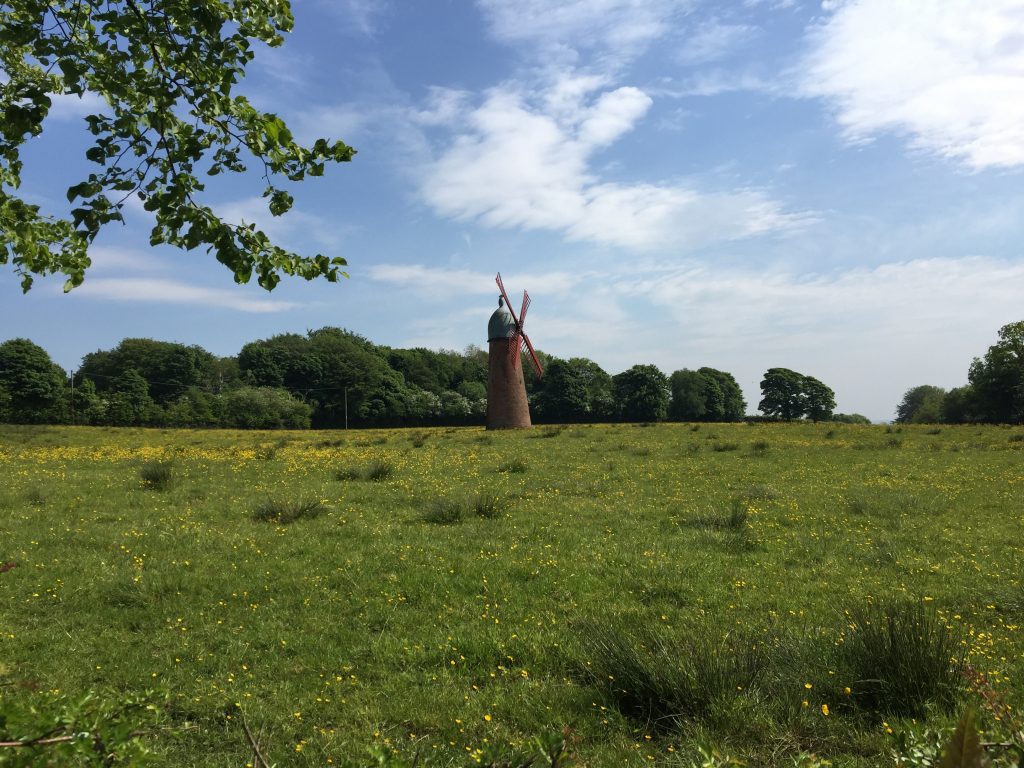 This is the Haigh Windmill built in about 1845 to pump water from near by ponds to the brewery up the hill. The use of wind power was dictated by Lord Crawford of Haigh Hall who detested the smoke that rose from the chimney of the brewery and did not want more smoke by using steam to pump the water uphill. There is a good information board on the roadside. Continue down the hill until you come to the entrance to Haigh Hall noting the lovely cottages just before that and the large farm, all part of the Estate. 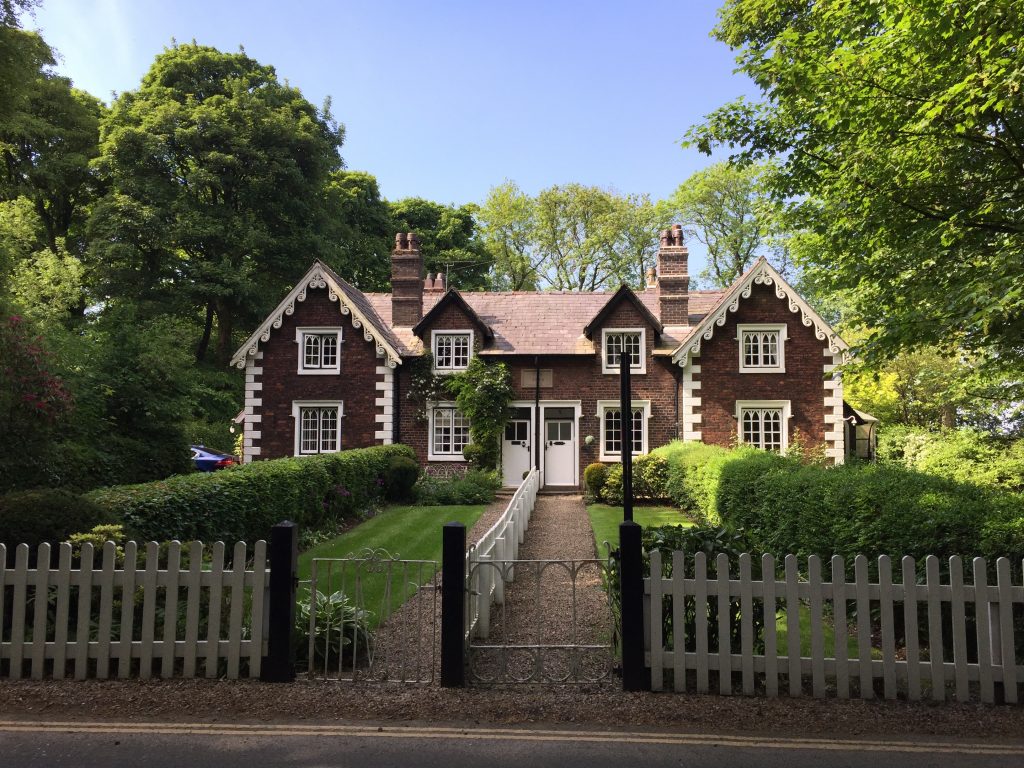 Head towards the square brick building to your left, which is the old stables with a courtyard in the centre. There are toilets and a café here. Then make your way down to the Hall itself making sure that you walk around the whole of the perimeter. The front of the building is the SE facing wall. On the SW side there are great views across to Billing Hill with its distinctive mast and to the right are the hills of Ashurst. There is another information board giving a comprehensive history of the Hall. The site actually dates back to 1295, when the first hall was built on the site and has been passed down the centuries since until it was sold to the then Wigan Corporation in 1947. During the wars it was used as a convalescence hospital.

The best option for overnight accommodation is to return into the centre of Wigan – see Stage 8. However, there is alternative accommodation in north Wigan close to the entrance to the Haigh Hall Park on the A49.

Complete Stage 9 and then return into Wigan by the main drive up to Haigh Hall. This is marked by a cycle route on the OS maps. It crosses the Leeds Liverpool canal, and then the remains of a railway. At Bottling Wood head down the valley to the River Douglas and then follow this directly back into Wigan. Total distance 9 miles. Parking is available in Wigan.