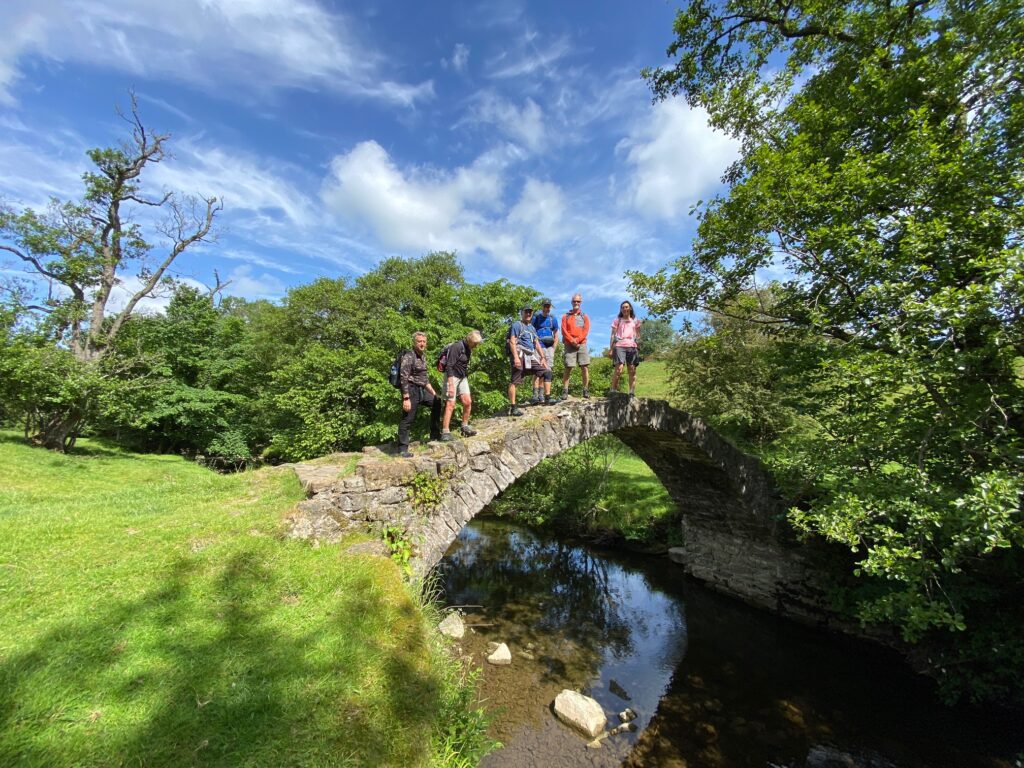 In 2022, having completed the final Loop of the Lancashire Way, I was presented with an opportunity to develop a shorter version of the route. 2022 was the 50th year of the Long Distance Walkers Association (LDWA), a group whose objective is to “”to further the common interests of those who enjoy long distance walking”. It is a not for profit organisation run by volunteers and is officially recognised by the sports governing body of the four home nations. All local groups of the LDWA were encouraged to put on events during the year to celebrate the event and in particular to join in walking over the weekend of the 18th and 19th June 2022, on what was to be known as the Big Walk Weekend.

Being a member of The West Lancs Group, I volunteered to put together a 50 mile walk based upon the Lancashire Way and so was borne the “50 Mile Route”, exploring our wonderful county of Lancashire, based mainly around the Ribble and Hodder valleys. To make it as inclusive as possible to as many members as possible, this was divided into and completed over four days with the final day being Sunday 19th June as part of the Big Walk weekend. But as well as this I had managed to persuade several willing volunteers to join me and walk the “Full Fifty” in one go starting on the Saturday and therefore enabling us to join the other members after their final walk on Sunday for sandwiches and chips and a good natter in the Bayley Arms, in the village of Hurst Green. 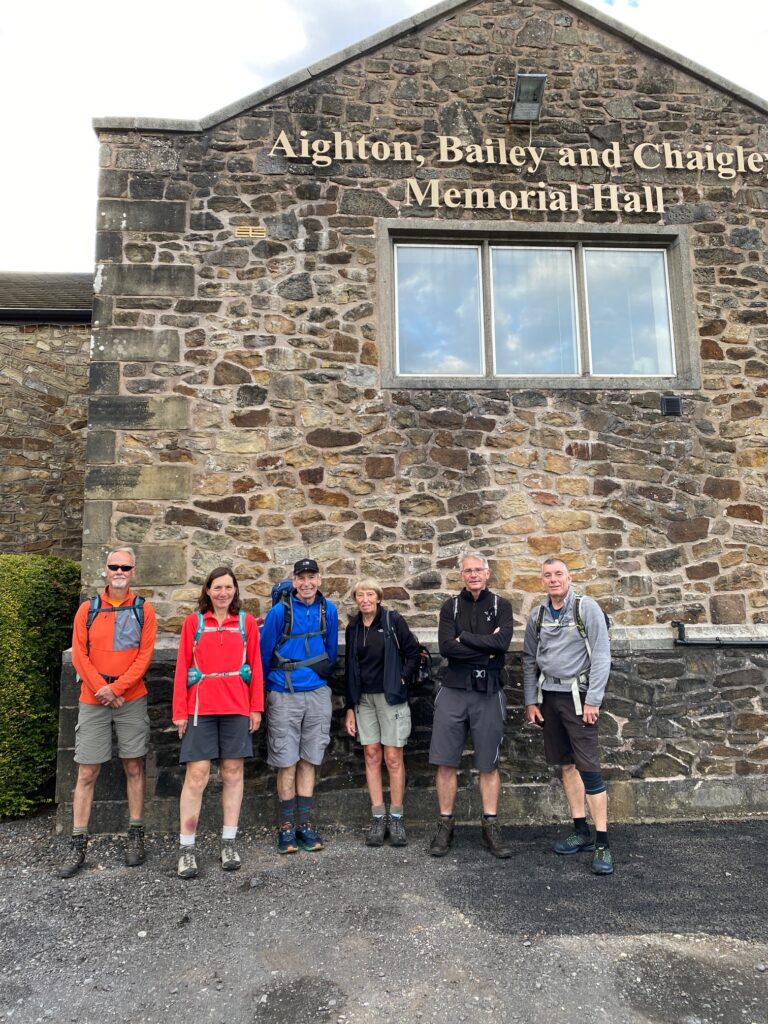 The early start in Hurst Green

The day began at 6am in attempt to complete as much of the 50 miles in daylight as possible. We all met at the Memorial Hall in Hurst Green ready and raring to go on a cool morning but with the sun peering through the clouds. A quick group photo and then with optimism and a sense of adventure we set off through the village and down to the River Ribble, crossing over the new replacement footbridge. The route then crosses fields, which were wet with dew and indeed a little uncomfortable. I am glad I had my new boots on – as the old ones would have resulted in wet feet already after just a mile or so.

We then skirt the Brockhall site, which once housed a mental institution, but is now home to Blackburn Rovers football club and many houses. So we pass their Academy and then its back down to the River Ribble and up to the confluence with the River Calder by Hacking Hall.

A promising start is followed a lesser section along a road and through fields to Whalley, crossing the A59 enroute, which I have never seen so quiet before. Over the Calder by the impressive brick railway viaduct and through the Gate House to Whalley Abbey and then into the centre of this historic town, four and a half miles into our walk. We stop briefly to find the toilets closed but the Co-Op is open nice and early for some supplies.

The next six miles are a gradual climb with an ascent of around 500m up to the summit of Pendle Hill. At 557m it is the highest point on the walk and probably Lancashire’s most iconic hill. From Spring Wood we make the initial steep climb out of the Calder valley via Clerk Hill and then take the track up the side of Wiswell Moor up to the Nick of Pendle. 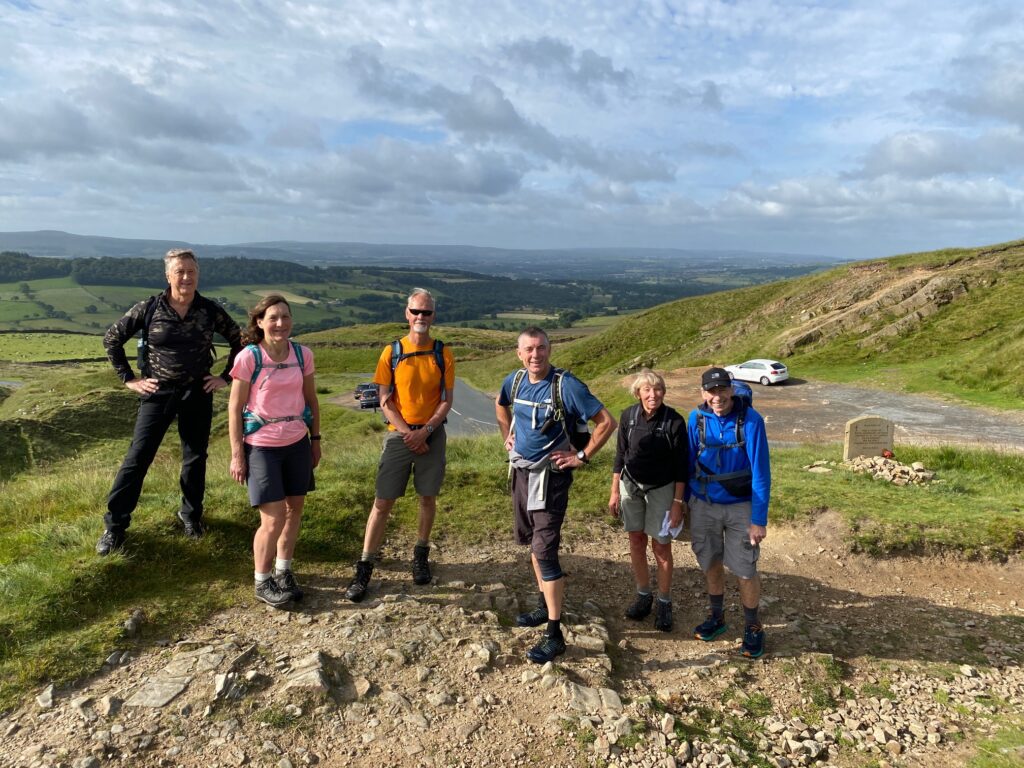 A quick drinks break whilst looking over the Ribble valley to the Bowland Fells, which is where we will end up later in the day. Then on to the summit via Ogden Clough and the new flagged path. Another group photo and a quick look at the view. It is 9.30am, so three and a half hours in, and we are making good progress. 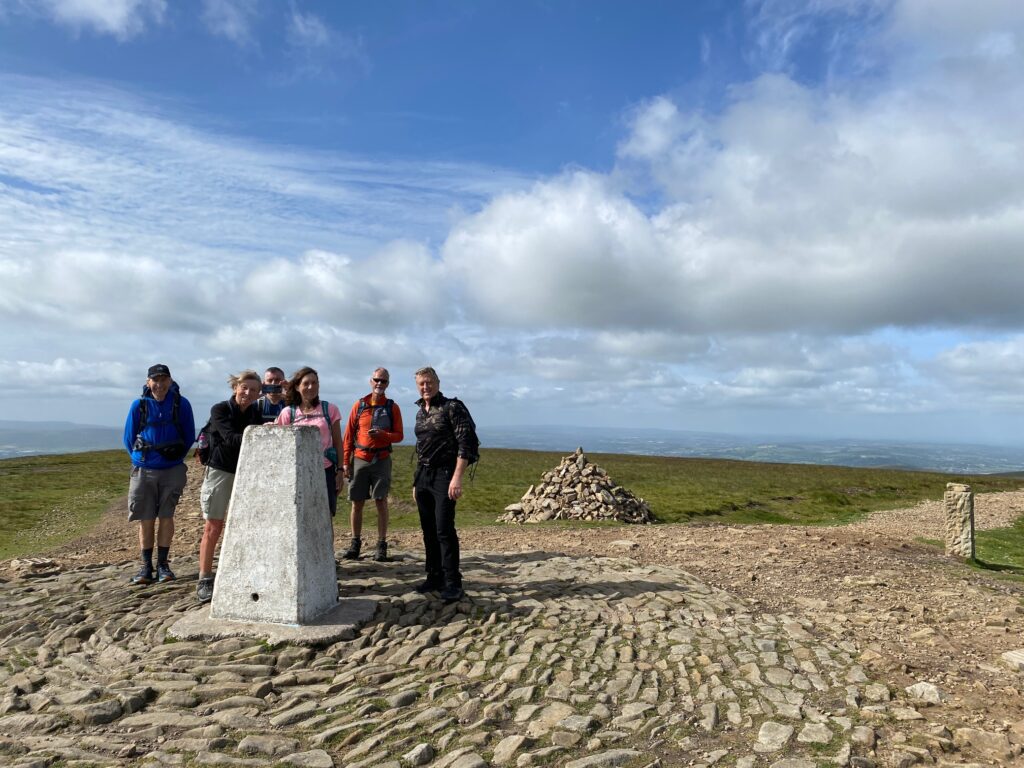 The summit of Pendle Hill, just three and a half hours in

The decent into Downham is a steep one but we are able to trace the next part of the walk in the distance across and up the other side of the Ribble Valley.

In Downham, we have out first break utilising the toilets and taking in calories. I treat myself to an ice cream! Then through the village and on to Sawley via the Monk’s Bridge – an old packhorse bridge probably built for the monks at Sawley Abbey so that could access the old road in Downham, which could take them west to the coast or east to York, always a great ecclesiastical centre. 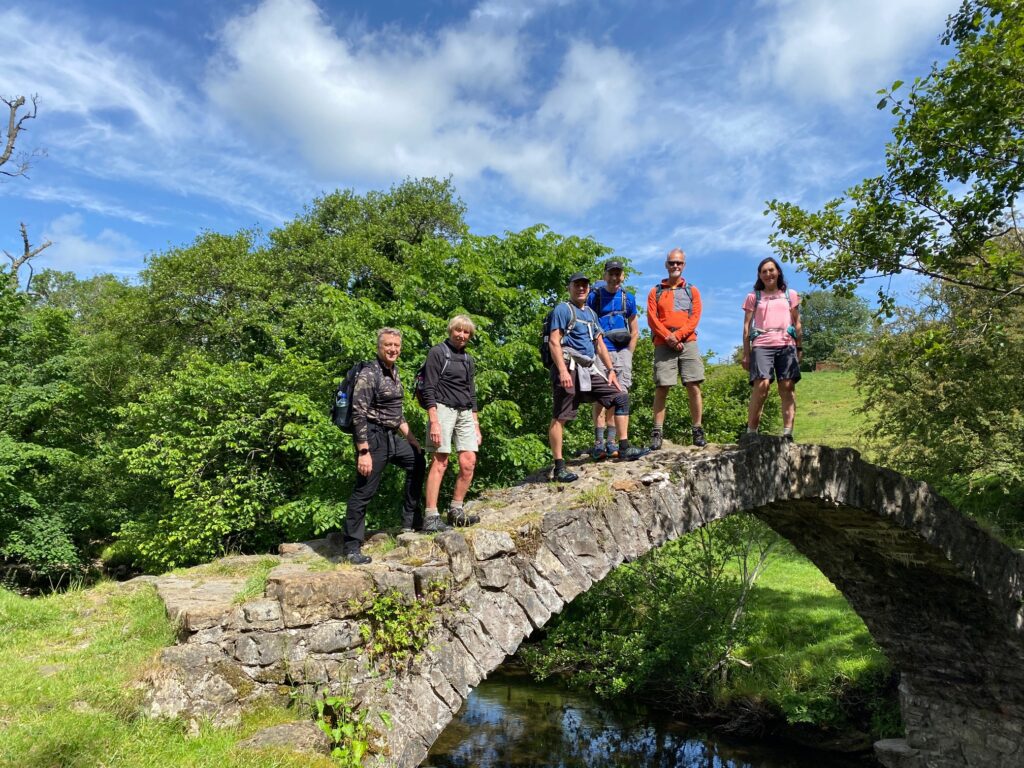 The “monks” bridge on the way to Swaley from Downham

The sun is baking as we cross the Ribble for the second and last time in Sawley and there are great views back to Pendle. 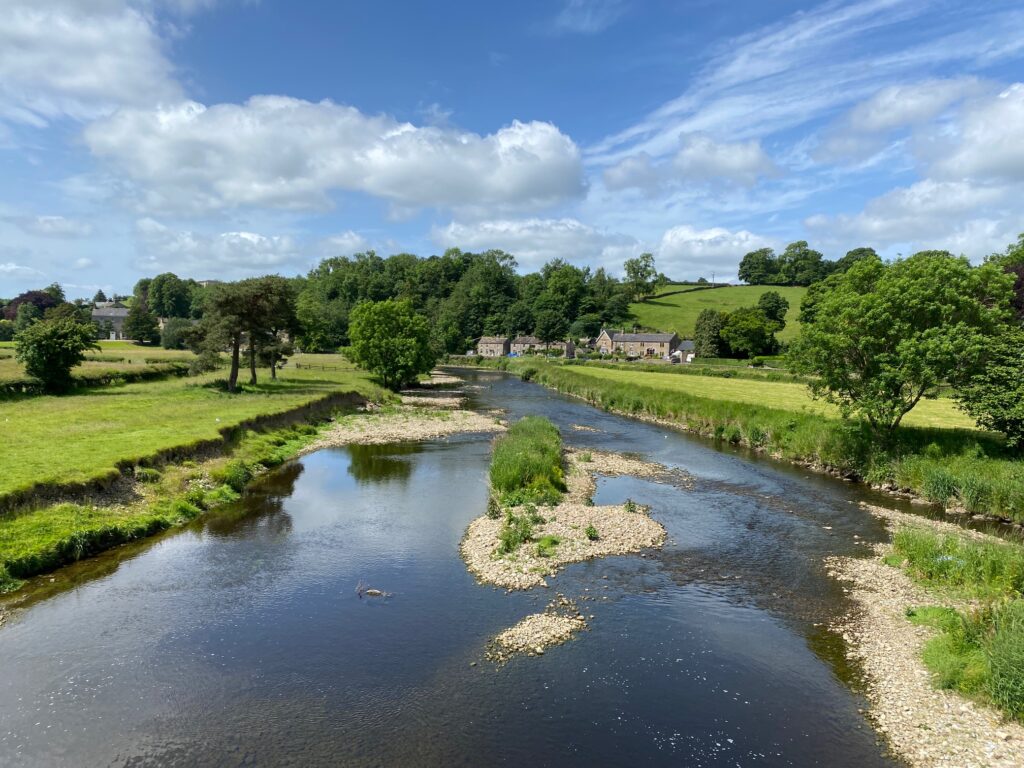 The River Ribble at Sawley 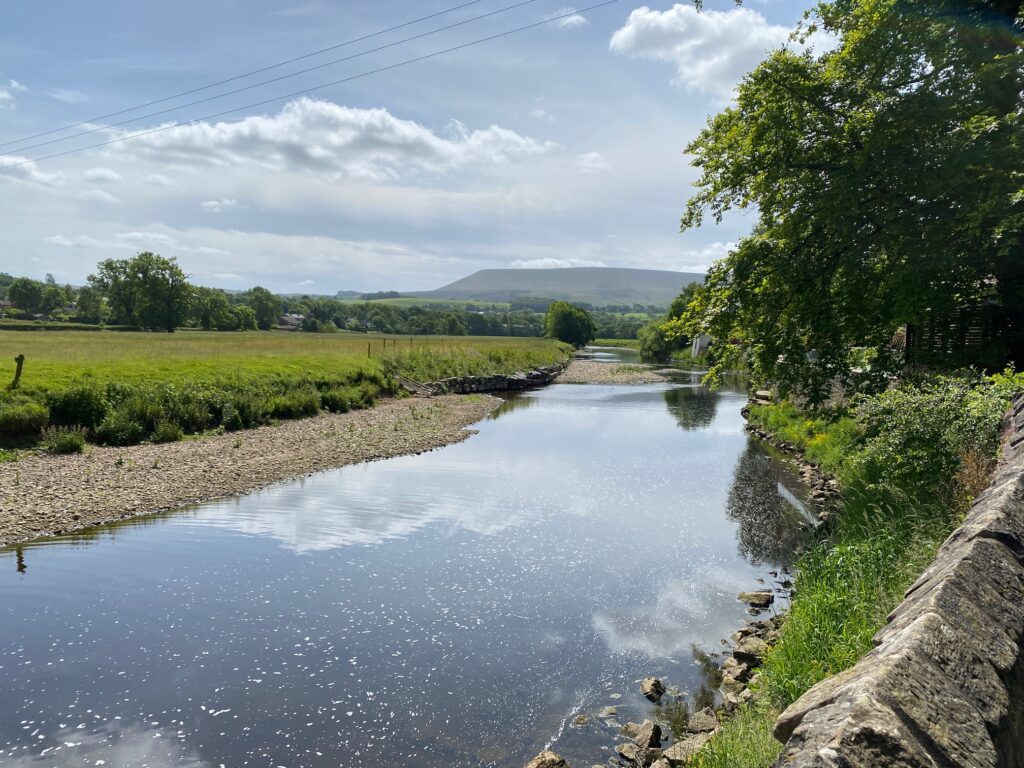 The River Ribble at Sawley looking back to Pendle Hill

A road section follows to Grindleton and then out of the village with its Heritage trail and many historical properties. We then start our second climb of the day as we head out of the Ribble valley and fortunately the sun has disappeared and the temperature is much more reasonable. We leave the road at White Hall and ascend to Grindleton Fell and then Easington Fell, with a final look back to Pendle, now very much in the distance. 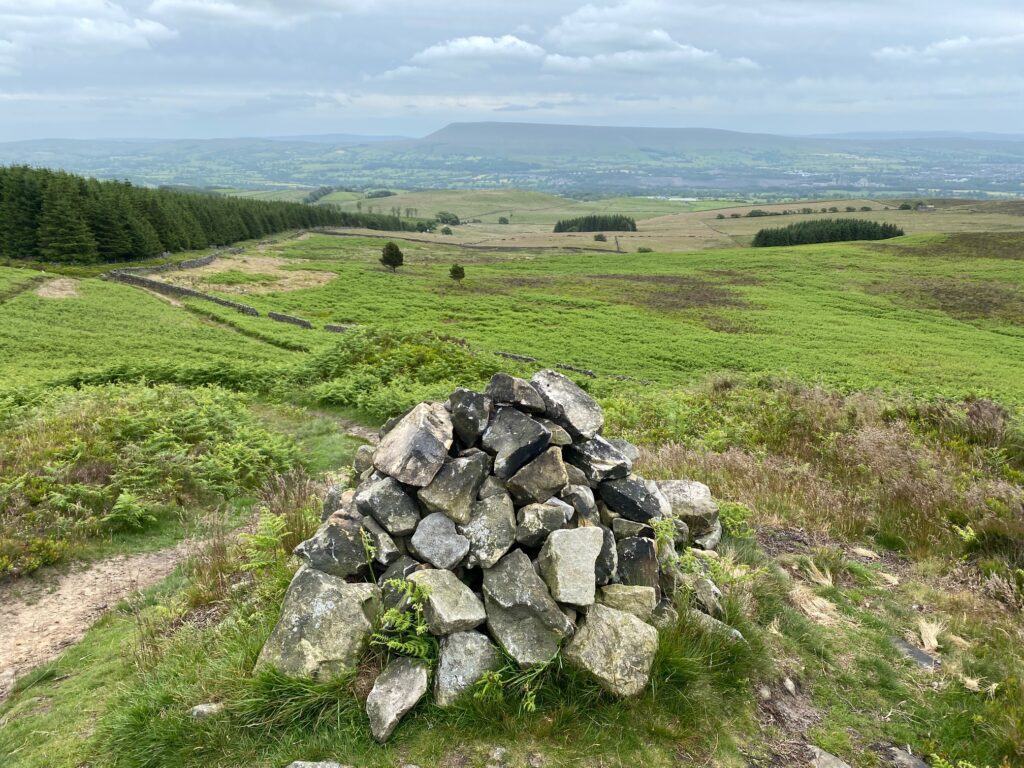 Goodbye to Pendle as we climb over into the Hodder valley

The descent to our late lunch stop in Slaidburn takes about an hour and we arrive there just before 2pm. We are 8 hours in and have completed almost 24 miles so almost halfway. Slaidburn is a good place to stop with toilets including a water supply, café and village stores and most of us take the opportunity to look after our feet. After a 20 minute break I think we could have all just stopped there for rest of the afternoon.

But of course that was just wishful thinking and we are on our way again by 2.30pm. The next 5.5 miles follow the River Hodder downstream to Dunsop Bridge with a short detour through the pretty village of Newton. Why did I put that extra distance in? For anyone that does not know Lancashire then it would be shame not to see the many pretty villages and hamlets along the way so sorry we cant take the shortcut along the river.

The next stage is a long one (11.5 miles) with a hard climb so the café in Dunsop Bridge, known as Puddleducks, so called after the many ducks on the river here, is our last opportunity to stock up and take on board more calories. We set off again, rejuvenated, and head north up into the Trough of Bowland and then turn west at Sykes to follow Langden Beck into the heart of the Bowland Fells. 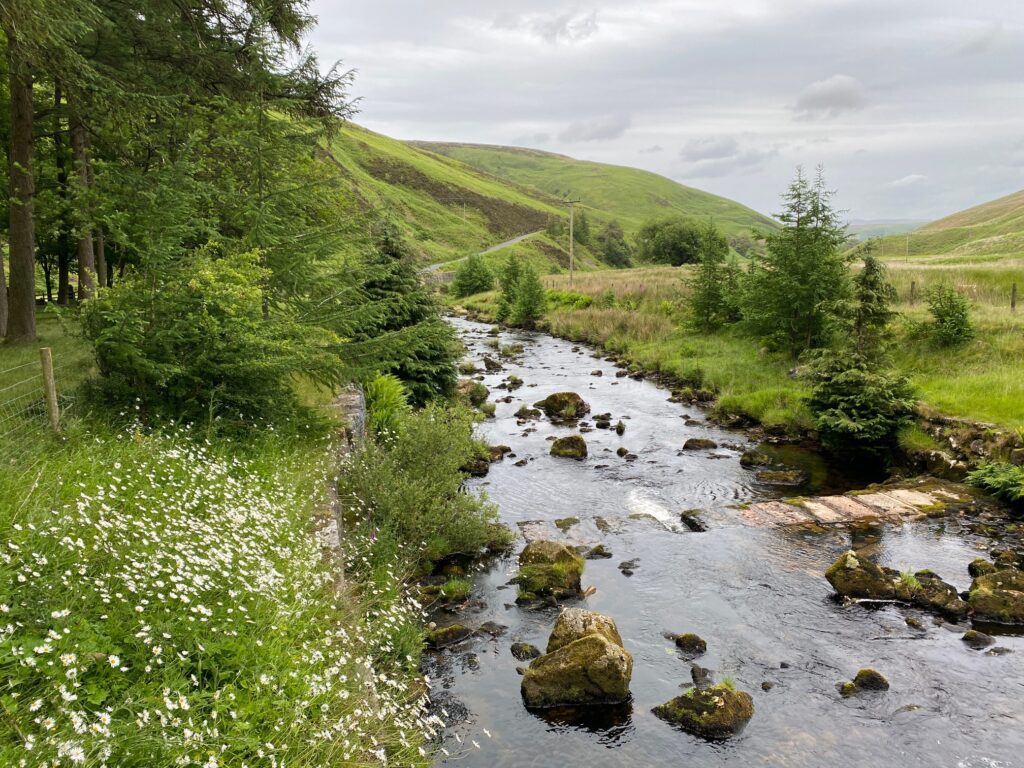 Langden Brook near Sykes in the Trough of Bowland

It is a pretty valley at this time of year but shortly after the “Castle”, an old barn to you and me, we reach Fiensdale Nab. Now is the time to begin our third climb of the day up to Fair Snape Fell, which at 520m is the second highest point on our route and the sixth highest point in Lancashire.

The first section is steep but then becomes easier and before long we reach Fiensdale Head with our first view west over to the Lancashire coast, a just reward for aching limbs. We have now completed 34 miles and it is just after 6pm so 12 hours in. We then turn SE and follow the fence to the summit of Fair Snape and then over to Paddy’s Pole for some of the best views in Lancashire. The sun is out across the Lancashire plain and coast giving super views.

Then for the descent to the village of Chipping for dinner but first we have a small climb enroute to the top of Parlick, one of Lancashire’s most recognizable hills. We reach Chipping just before 8pm. With all shops now closed, I had organized pies at the Sun Inn to ensure that we had enough energy for the last leg of just under 12 miles to the end in Hurst Green. We had a bit of a wait as they were not ready for us when we arrived as promised, but it was well worth the wait. The pastry was delicious and it wasn’t just because we had waked 38 miles so far. We stayed for almost an hour in the end but it lifted spirts and we could replenish water bottles, have a couple of drinks and access the internet and phone signals to communicate with those at home. 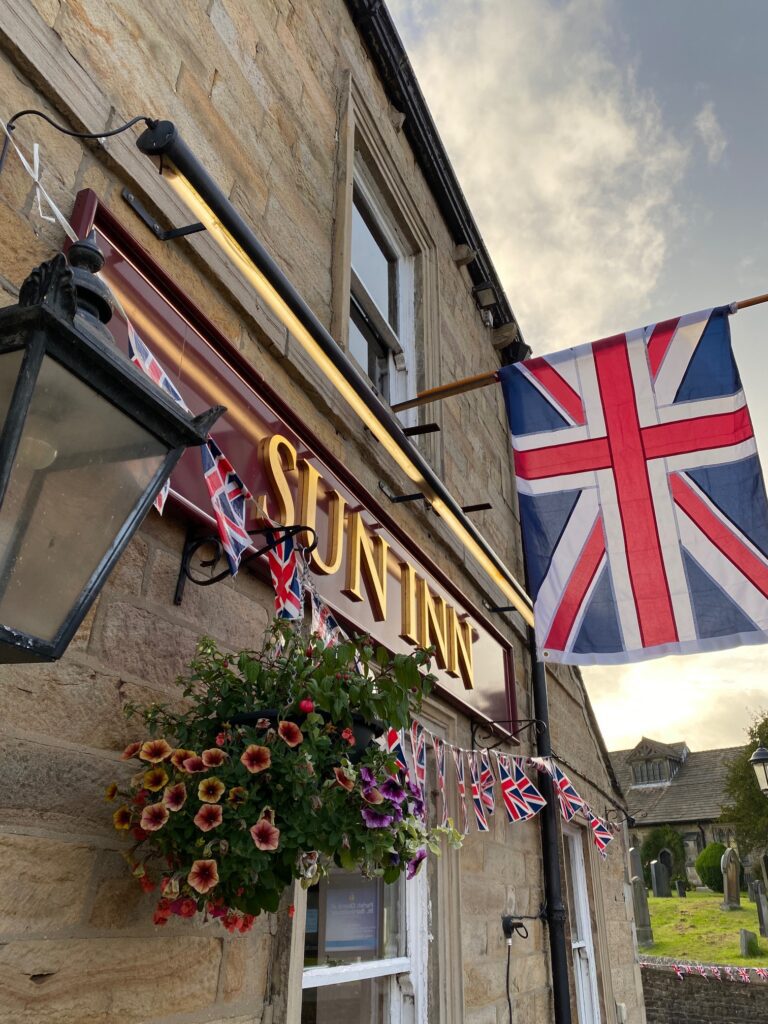 At about 8.50pm we set off, still with the sun shining, to cross the Loud valley and then it was that terrible climb up to Jeffrey Hill on the side of Longridge Fell. Tony, our visitor from South Manchester, gallantly helped by carrying both his ruck sack and one other. Not sure how he did it but hats off and he refused to relinquish it even when got to the trig point at Spire Hill, the highest point on Longridge Fell. 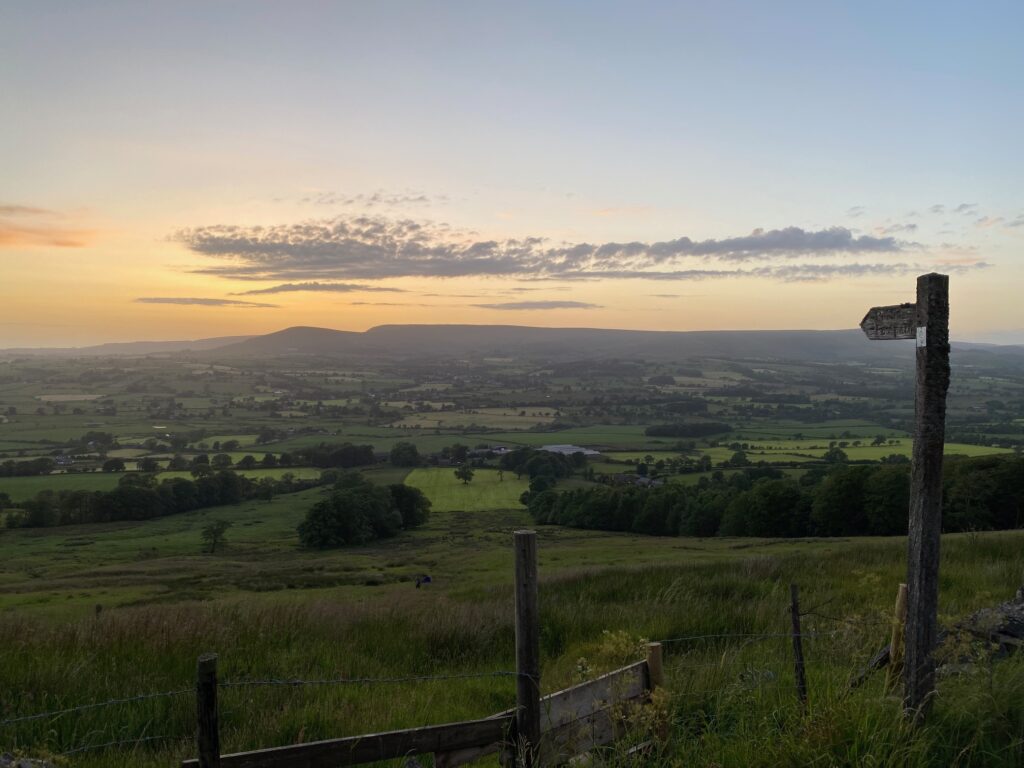 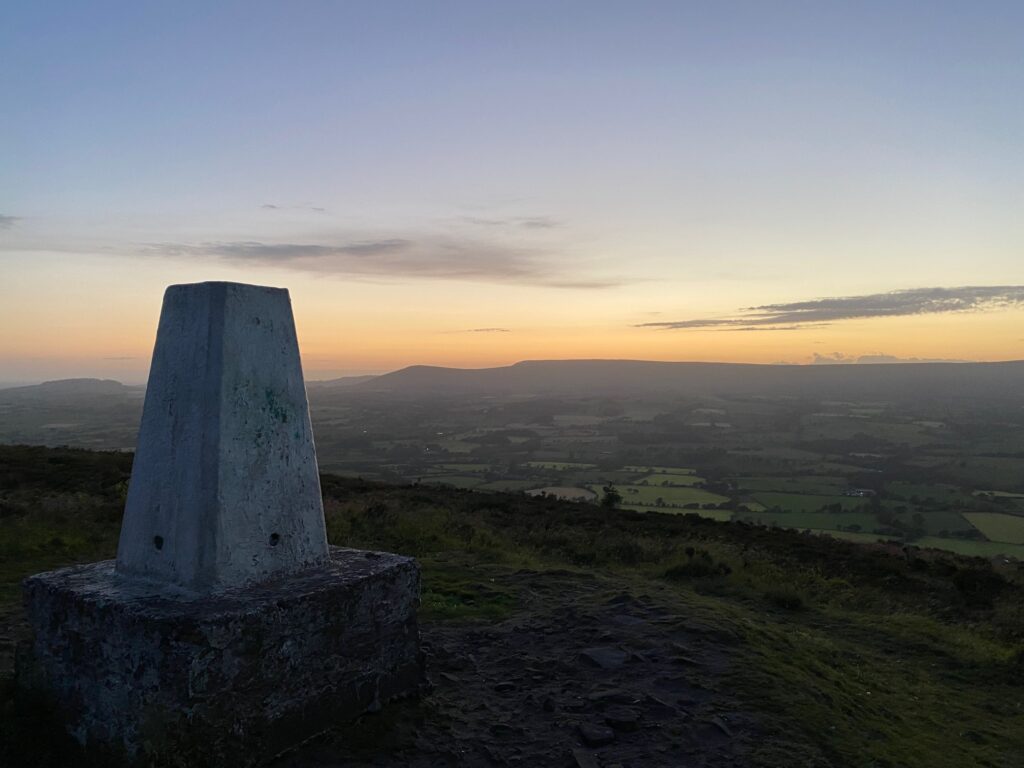 The trig point on Spire Hill, the highest point on Longridge Fell

By this point the light had almost disappeared giving the sky great colours back in the direction we had come outlining both Parlick and Fair Snape across the valley. On with our torches and into the forest with many a detour around fallen trees from storm Arwen earlier in the year. It was not easy as it was very dark now and we had to be careful not to stray off the path. But we made it through and down to the road. I was tempted to make a short cut directly to Hurst Green as the next section is another detour to take in a lovely section of the River Hodder, which of course would be lost on us in the black of night.

So from the Upper to the Lower Hodder bridge we trudged along the river bank with its many ups and downs, tree routes and footbridges with the sound of the river to our left. It is not an easy section in the dark and you have to concentrate. Most conversation had stopped by now as we just thought about finishing.

We alighted on to the road and then it was up to Stoneyhurst College, mainly in darkness until we came around the front to the chapel and imposing entrance to the school. The final section is along the “Avenue”, which is a spectacular approach to the College, then turn left by the statue and within 300m we are back into Hurst Green with just another 100m or so to our cars and the finish at the Memorial Hall. The time is 00.38 so 18 hours and 38 minutes to complete the 51 miles or so. I had hoped to arrive before midnight but its not about the time and we had had a few decent stops making the walk all the more civilised.

My thanks to my six walking companions, Jaqui, Kath, John, Brian, Steve and Tony, for accompanying me on this version of the Lancashire Way and celebrating the 50th Anniversary of the LDWA in the true spirit of the organisation. Any one out there up for a challenge? It’s a great walk covering some of the best bits of the beautiful county of Lancashire.