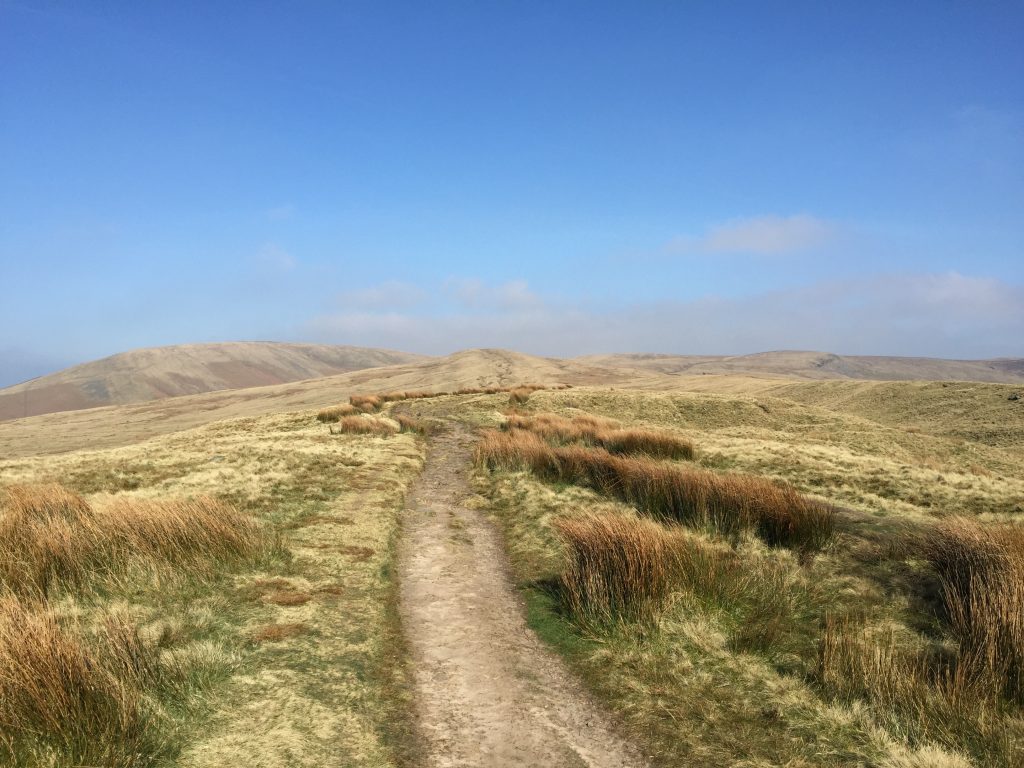 The track from the Nick of Pendle, with Pendle Hill in the background

A steady climb from Whalley up to the Nick of Pendle and beyond with great views both into East Lancashire and West over the Ribble valley and beyond. Pendle Hill is almost in sight but unfortunately before we climb to its summit we will descend towards the Ogden Clough valley so that we can take in the villages of Newchurch-in -Pendle and Barley, losing a significant amount height, but allowing us to visit the heart of Pendle witch country.

A map of Stage 20 can be found below courtesy of Ordnance Survey maps. You can subscribe yourself using this link, https://osmaps.ordnancesurvey.co.uk, which will enable you to import the GPX file which can be downloaded below.

Before we start this stage, I had a dilemma as to whether to join this and the next stage such that it was one continuous walk from Whalley to Downham via Pendle Hill. However, I have split it with a short detour to the village of Newchurch and ending in Barley. The latter is honest and most importantly has two pubs both with accommodation and two cafes, whilst the former has the Witches Galore shop. The combined two stages are long and with a significant ascent so breaking it into two seemed the most practical and sensible option. But for those who want to get on as quickly as possible I will outline two possible shortcuts in this stage, which will join up with Stage 21. 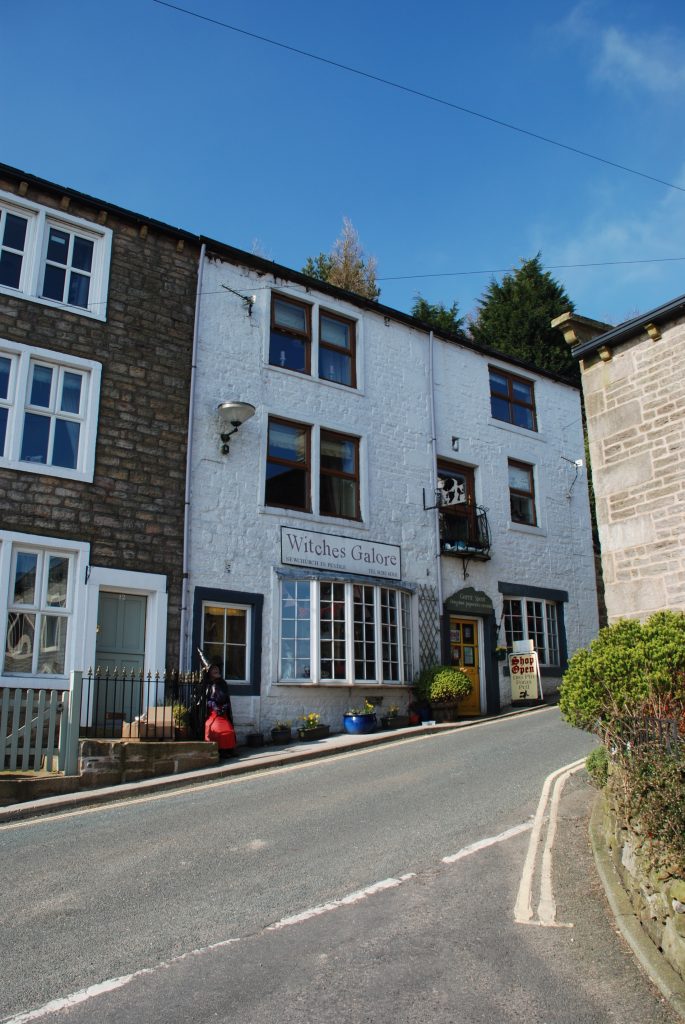 Begin the stage on the main road in Whalley at the Parish Church. Cross the road and take the first road on your left – Accrington Road. Follow the road to the cross roads with traffic lights. Cross straight ahead and enter Spring Wood with its Visitor Centre via the road entrance.

At the entrance to the car park there is a stile on the right, which crosses over into the golf course. Proceed along the left edge of the fairway for a few hundred meters before the path exits the course into a newly planted coppice and then over another fence into a field. Make your way directly up the steep slope along the line of two prominent trees towards a wall at the top of the field. When you reach the wall do not take the first path to the right but continue in the same direction to find the next path on the right. Cross over the fence and make your way eastwards around the back of Clerk Hill House until you see the track, which joins the road servicing the various buildings. Turn left and then left again when you meet the tarmaced road. We then follow this road for about three kilometers in roughly the same direction (North East), which in turn becomes a stone track and then a farmer’s track and then a stone track again. At the end of this we join the Clitheroe to Sabden Road, turning left up to the summit of the road, which is known as the Nick of Pendle.

From the Nick find the track, which continues the climb in a northeast direction. In the event of bad weather please take care, as there are numerous tracks and paths over this area. A compass and bearings will help if the clouds are low and you have to proceed through mist. These conditions, however, do not seem to have any impact upon the numerous runners on their way up to Pendle Hill who ignore all tracks and follow their instincts across the thick heather and bog.

Follow the distinct track, sometimes more than one, along the spine of the hill veering slightly more East of NE until you reach the point called Badger Wells Hill on the OS map.

If you are continuing along the Central Loop then at this point you need to ensure that you follow the track which curves firstly to the East and then almost South East until you reach a wall. Over the wall there are three options. However, the easiest is to follow the concessionary way, which follows the wall left in an easterly direction. After 10 to 15 minutes walk you will come across a stile over the wall. Go over the wall and then follow the boggy path in an easterly to east of SE direction. We are now heading down to the valley of Ogden Clough with the two Ogden Reservoirs.

There are paths, which go directly up to Pendle Hill from Badger Wells Hill following the upper course of Ogden Clough. However, none are recognized footpaths and in mist it can become very easy to get lost. So unfortunately we will have to descend into the valley and then climb again to the summit of Pendle Hill.

Cross over two walls and then the path changes direction towards the NE. Cross the next wall via the stile and continue straight on ignoring the path, which bears left. At the next wall you need to decide whether you want to push on to Pendle Hill and Downham or to follow the route to Barley.

If the former, then turn left, directly down the hill, without crossing the wall. There is steep decent down to the wall of the Upper Ogden Reservoir. Cross the dam wall to the other side of the valley and then turn left and pick up the next Stage – see next page. 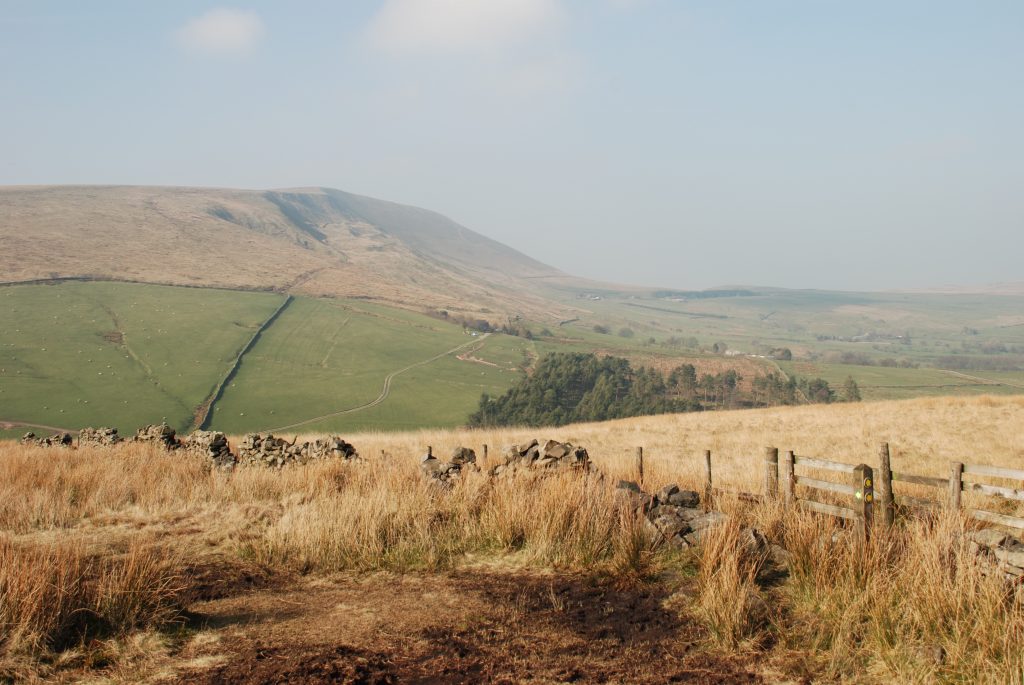 Otherwise, cross the wall and continue straight on over another wall to the corner of Fell Wood. Turn right and then follow its boundary wall in an easterly direction. Almost at the end of the wood , cross over another stone stile and then we pick up the Pendle Way ,which joins us from the left. This is marked by distinctive footpath markers with yellow arrows and the outline of a witch in black. There are excellent views down to Barley and to Pendle Hill from this part of the walk. 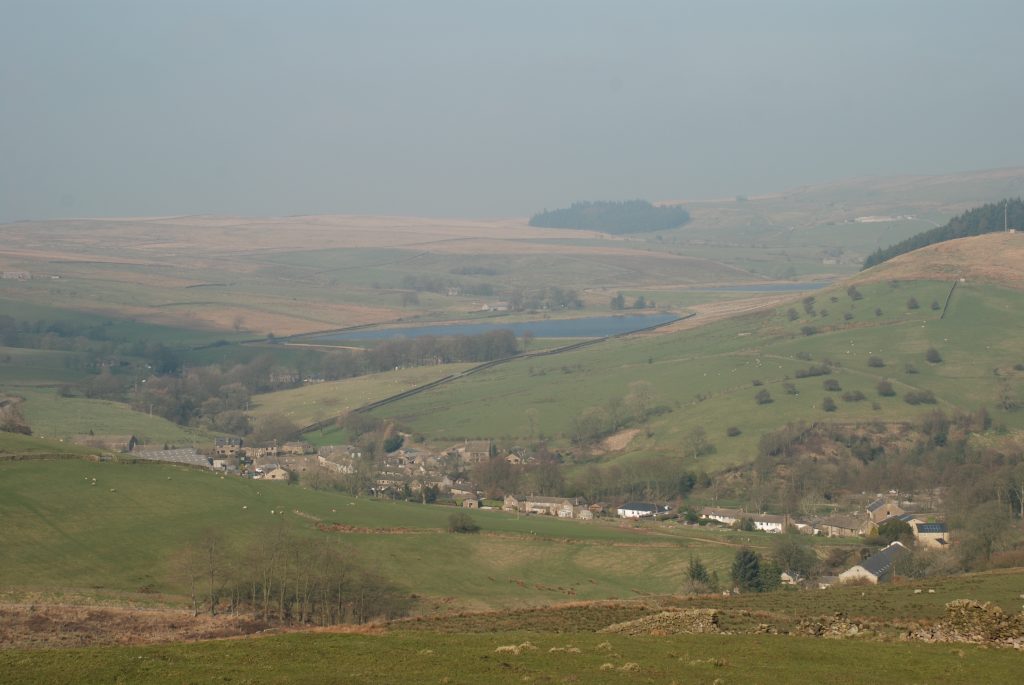 Looking down to Barley from above Newchurch-in-Pendle.

Carry straight on keeping the boundary wall on your left, through a gated gap in the next wall and then down a slope. After about 100 meters you will come across a stone stile and footpath signs. The Pendle Way sign directs you right away from the wall. Head across the field towards a marker post in the middle of the field to the right of the water works building ahead. Exit the field by the gate on to a path. Turn right and follow this to another gate, which takes you to some steps, which descend into Newchurch-in-Pendle.

Newchurch-in-Pendle is similar to many other villages around here – often sad and quiet during the week when the weather is wet and windy. But on a sunny weekend it becomes a busy destination for hikers and tourists. The reason can be seen by turning left along the single carriageway street through the village, when outside a row of cottages you will come across a silent bent old lady in black. Closer inspection will reveal that this is in fact a papier-mache witch, with a pointed hat, a hideous face with warts and a large chin. We have arrived in Pendle witch country!

In 1612 the area was gripped by the largest witch hunt in English legal history. The story revolves around two large, destitute families – the Chattoxes and the Demdikes – who traded on a local reputation for black magic. They dealt in spells and curses, providing a service for their neighbours but intimidating their enemies with threats of misfortune and death.

This was a community ill-educated and gripped by superstition, so that when magistrates came looking for religious deviants they found no shortage of witnesses keen to see these two clans carted off to the gallows. At their trial, all but one was found guilty of various crimes of witchcraft, including murder and a plot to blow up Lancaster Castle. The churchyard at Newchurch regularly appears on their charge sheet.

The Demdikes lived in Newchurch itself and the family matriarch, Old Demdike, is said to have dispatched her grandson to steal consecrated bread from the sacred building for use in her spells.  The Chattoxes were alleged to have raided graves here and stolen the teeth of the dead.

It is worth taking a quick detour to the parish church of St Mary’s, which is just down the lane on the right. Sunk into the west tower of the church is the ‘Eye of God’ – an elliptic of lead installed some years after the witches’ execution to ward away evil spirits. In the graveyard is the ‘Nutter Grave’, which for generations was thought to be the resting place of Alice Nutter, the wealthiest of the Pendle witches. 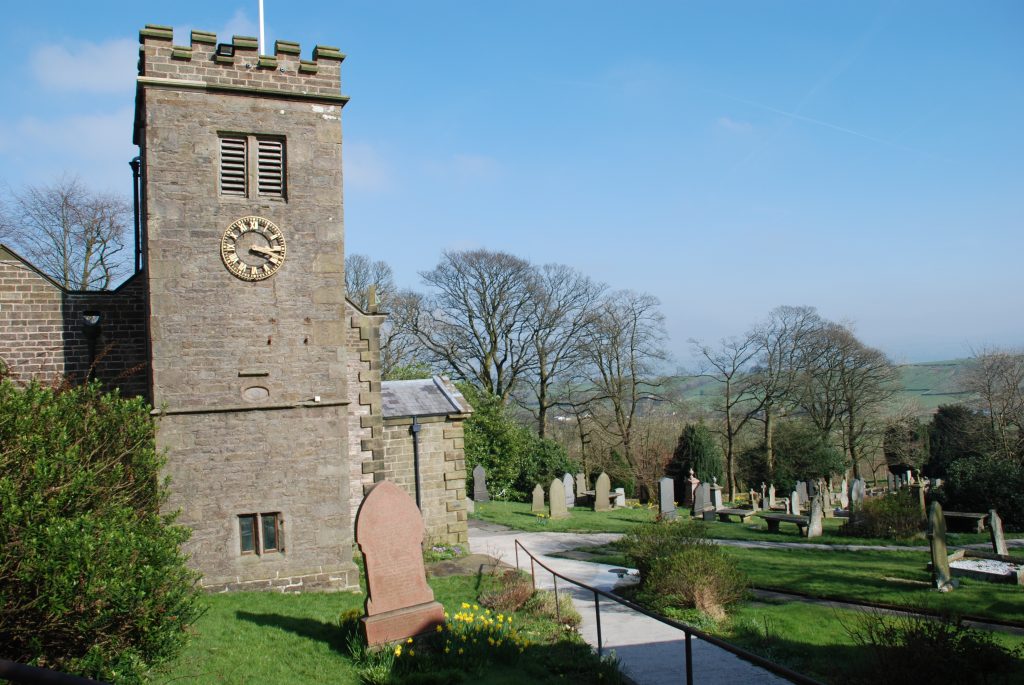 The area around Newchurch also has its stories. At the nearby Faugh’s Quarry it is claimed Demdike had a meeting with the devil, whilst Bull Hole Farm is the site of the murder of a local girl, allegedly at the hands of the witches. There are few corners of Pendle that do not have some connection – real or imagined – to the coven.

Before leaving the village do pop in to the Witches Galore shop to savour all sorts of “deliously devilishly merchandise” – a flavour can be found at www.witchesgalore.co.uk.

Continue up the hill along the main road. When this turns sharply to the left, with a stone sign for “Barley Fold” set in the wall, take the road to the right and then bear left and follow the track, which takes you to two properties, with various outbuildings. Pass the first property and then actually enter the grounds of the second. Turn immediately left and you will see a gate with a footpath sign taking you out of the property into a field. Follow the path in a northerly direction, down the hill. Before the bottom of the valley you will come to a track. Turn left and follow this to the row of cottages known as Bridge End. Join the main road, turn right and descend the hill into Barley, with the Village Hall on your left. To the right you can see the Barley village car park with toilets and a tea shop in the wooden building behind. Rather than walking up the road into the village proper, use the footpath behind the toilets, which makes its way through a pleasant grassy area by the side of the river. This comes out at bus stop and the Stage ends at the Barley Mow pub just ahead on your right. 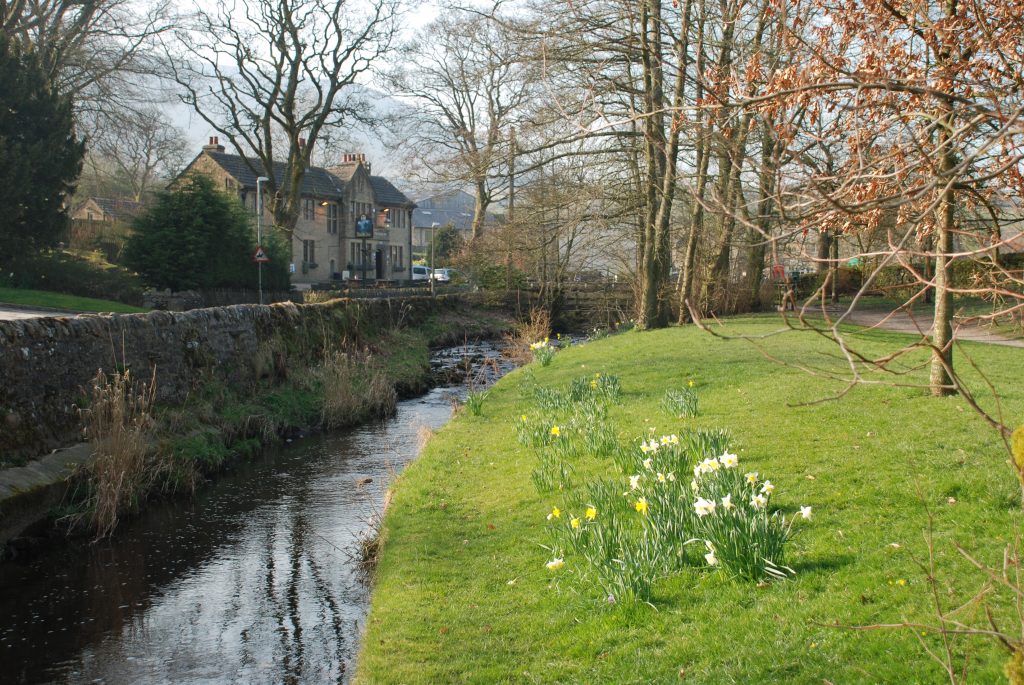 The Pendle Inn in Barley

The village of Barley is well kept, rather than pretty, and has won the Best Kept Village on Lancashire on more than one occasion. It is one of the main starting points for climbing Pendle Hill. Its origin was around agriculture but the presence of lots of water did allow two mills to flourish here, although the one at Barley Green, which had 200 looms, was destroyed by floods in the 1800’s.

Accommodation with food is available in the village of Barley at both the Barley Mow pub and the Pendle Inn, both of which are at the end of the Stage.

Split the Stage into two. Climb to the Nick of Pendle and then return to Whalley via Pendleton and Wiswell.