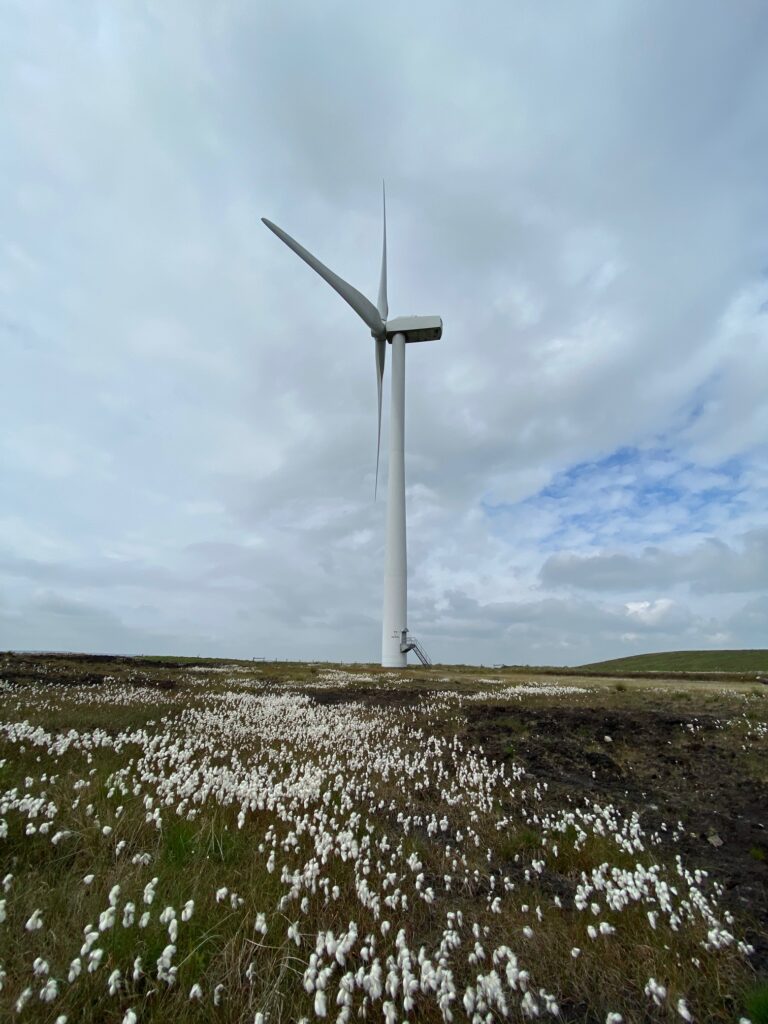 Wind turbines and the weather in East Lancashire are made for each other!

875 feet climbed – highest point 1,439 feet – just below the summit called Freehold Tops or Ttough Edge End, which is in Yorkshire

This Stage follows the border with firstly Yorkshire and then Greater Manchester for most of the entire stage. It is pure East Lancashire moorland scenery with more wind turbines and excellent views.

Map of Stage 51 – Unfortunately OS maps of the Eastern Loop are not provided. However, if you e mail lancashireway@aol.com and a full GPX file of the Eastern Loop will be sent to you and this can be down loaded on to OS maps at www.osmaps.ordnancesurvey.co.uk. As an alternative you can view the interactive Map of the Stage below and/or download the GPX file for this Stage only by following the instructions below.

Although it is the highest point it is just over the border in West Yorkshire so a small detour will need to be made if you wish to bag this trig point.

As well as the Red Lion pub it includes other historical buildings including the Doctor’s Surgery.

Turn left and then cross the road. Take the footpath on the right and follow through the wood up the slope and exit onto a track. Turn right and follow the track up around a bend and then take the gate on your right with a Burnley way sign. Follow this alternative steep track up the hill and past and behind a farm with a garden and on to a gate. Pass through the gate and continue straight on along the grassy track. Shortly after the farm you will see a Burnley Way marker sign on the right ignore this, which takes you up to Thieveley Pike, and carry straight on along the track.

Follow this track for around 1km alongside the stream called Greens Clough, which is the border with Yorkshire. Note Stoodley Pike to the East on top of the hill in distance looking down the Cliviger Gorge. 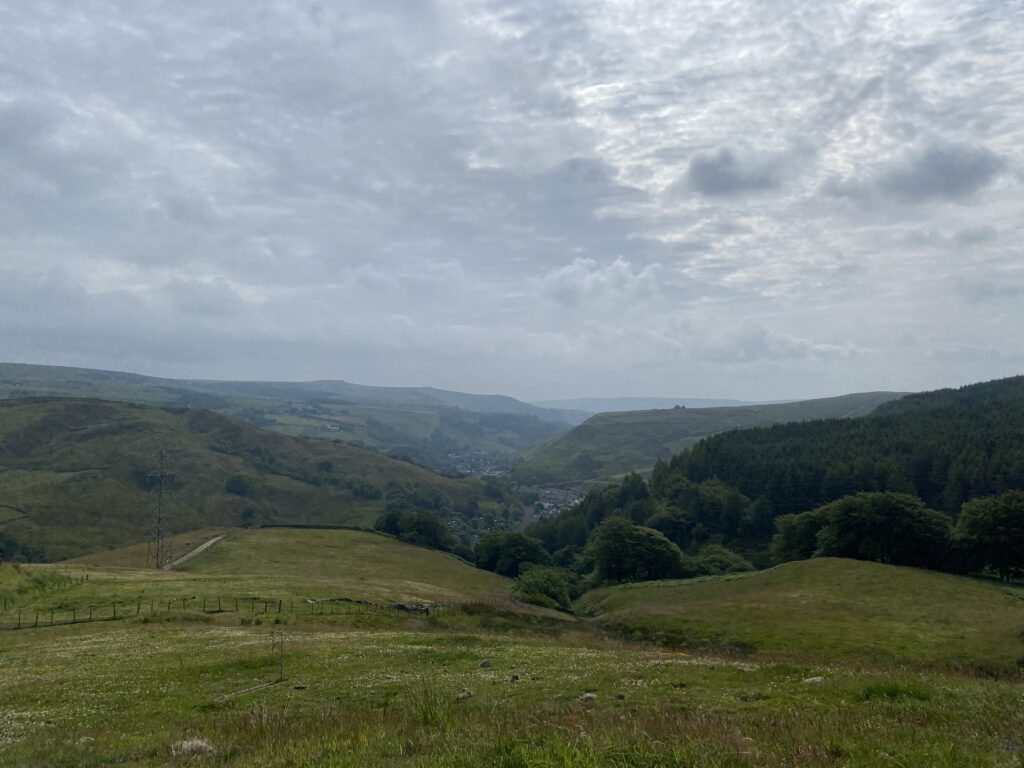 After climbing for sometime the slope evens out and then pass through a stile gate onto partly tarmacked road, with Healed Top Farm to your right. Continue to follow this track which bends to the left just before the farm. 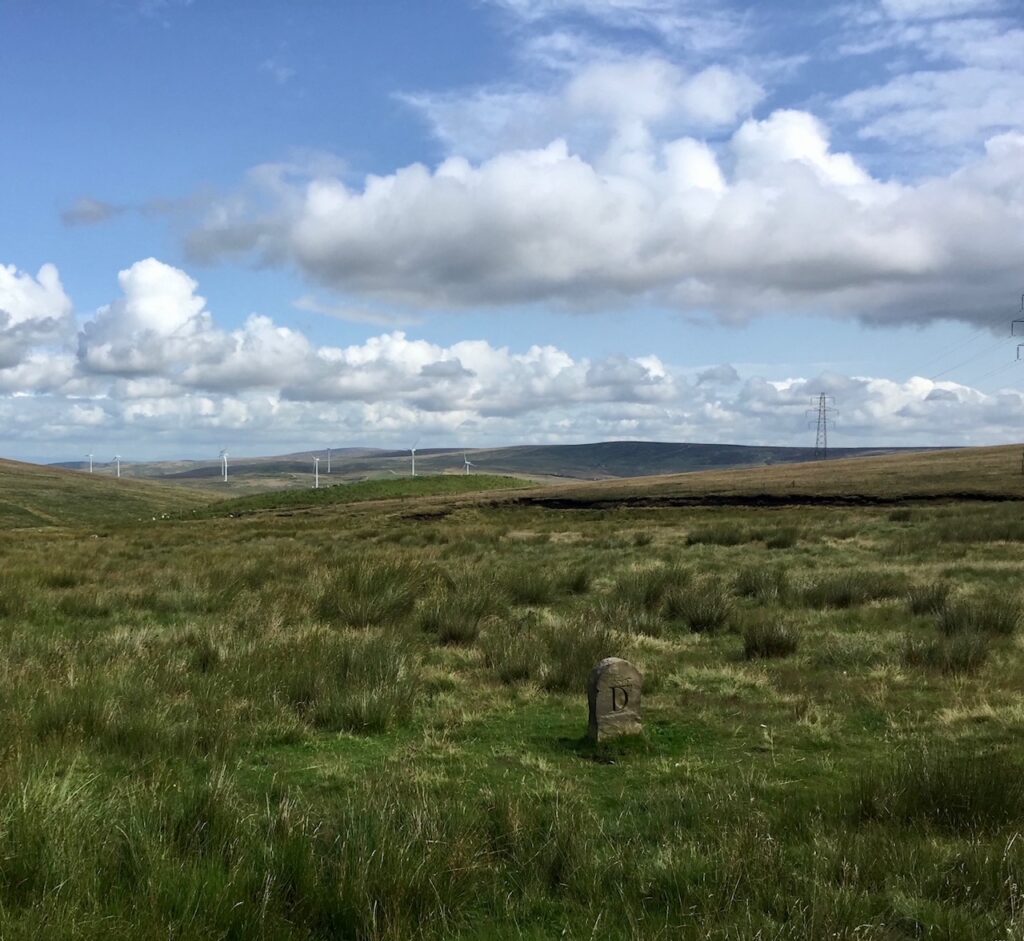 An unusual marker stone on this stretch of the route – The Rossendale Way?

Pass through a substantial metal barrier, carry straight on, cross over a track and then pick up a further grassy track down to the road. Ignore all the rubbish in the layby! 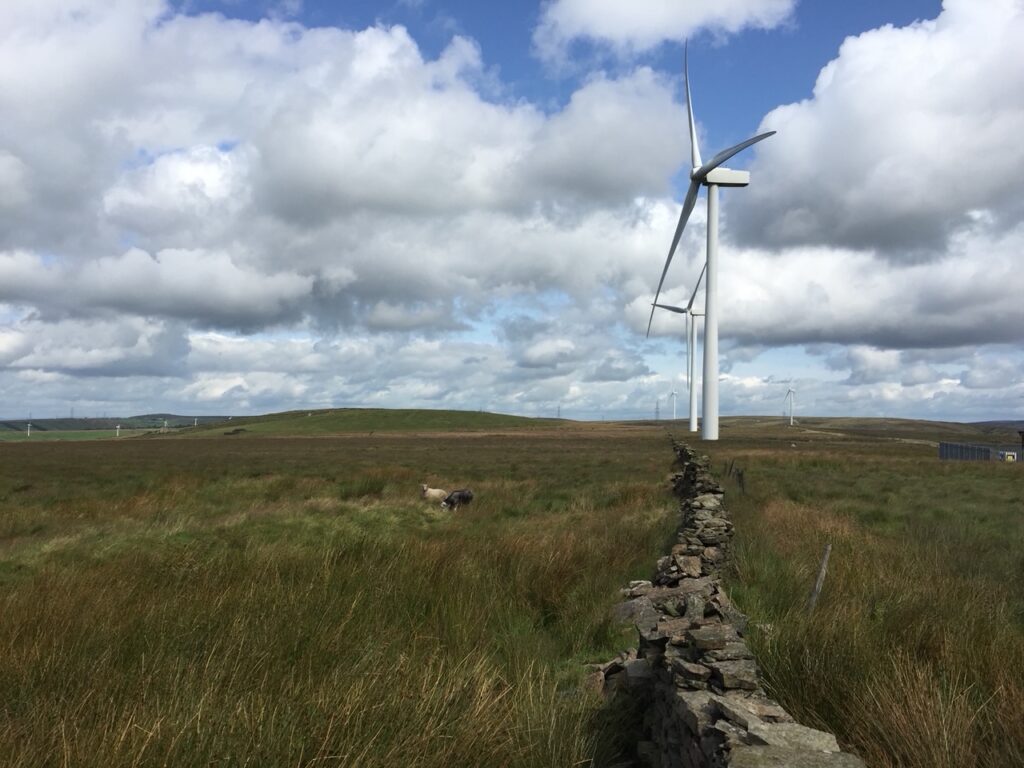 At the gate turn left and cross through a makeshift gate and then a large metal gate. Follow the fence on the right and then bear left and continue along the fence to a large ladder stile with Rossendale Way markers. Do not cross the ladder stile but carry on, on this side of the fence/wall. When the wall kinks to the right continue to follow the wall to a large metal gate. Go through the gate and carry straight on unless you want to go to the summit of Trough Edge End. At a height of 454 metres this is the second highest point on the 30 miles from Earby but it is just over the border in Yorkshire and is therefore off our route. Continue straight on parallel to the fence. Note the great views down the valley to Whitworth with Manchester beyond. On the other side of the valley to the west you can see the distinctive hill that is called Cowpe Lowe and also Scout Moor with its wind farm, both of which we will visit on the next Stage.

At the next gated stile continue on along a grassy track with walls on either side. Eventually you will come to a large metal gate and a ladder stile on the right and a large wooden gate in front of you. At this point we will LEAVE the Rossendale Way, which turns left and then right and heads to the top of the Hades Hill, which is not in Lancashire. Go through the large wooden gate. At this point Yorkshire just to our left now becomes the county of Greater Manchester but we stay, just, in Lancashire.  Bear slightly right initially and follow the wall on your right and then carry straight on when the wall turns through 90 degrees right. The path continues in the same direction along the contours but take care as it is not always distinct.

Eventually you will come to a bank and at this point scramble up the bank to a quarry track. Turn right and follow the track until it bends to the right and becomes grey in colour. Please note that the Rossendale Way, which we have just joined again briefly, bears left off this track before this point and climbs over Middle Hill, which is again just over the border! So we will take a simpler route which remains in Lancashire and involves turning left shortly after the grey track starts and then bear right on a grassy track which curves around the side of Middle Hill, which is up on your left.

Continue down the slope bearing slightly left until it meets the Rossendale Way again , which descends steeply down from Middle Hill on your left. Carry straight on for around 150m and then turn right and follow the path which makes its way directly to the top of Brown Wardle Hill. Excellent views south! From the summit carry on in the same direction down the other side of the hill. Keep to the left of two paths which follows a series of stone marker posts. With a road visible ahead you will come to a large finger sign post at the junction of four tracks. Turn right and pick up a wall on your left. Look out for a wall stile in this wall and use this to cross into a field. Bear right at a footpath sign and then right again at another footpath sign. Then follow the wall on your right to a metal gate stile. Carry straight on and then bear slightly right to find a stile directly above a property. Do not cross the stile but turn left and follow the fence on your right in the direction of a church. When the footpath drops down onto a grassy track turn sharp right back upon yourself and then cross through a stile gate by a large metal gate onto the drive at the front of the houses that we just saw before. Turn left and follow the concrete drive and then after 30 metres take the footpath on the left into a field along a paved path. This ends at a metal gate and a cobbled path with a footpath sign stating it is the “doctors trail”. We are about turn right, however, if you turn left up the hill along the cobbled path you will come to the front of Whitchurch church. 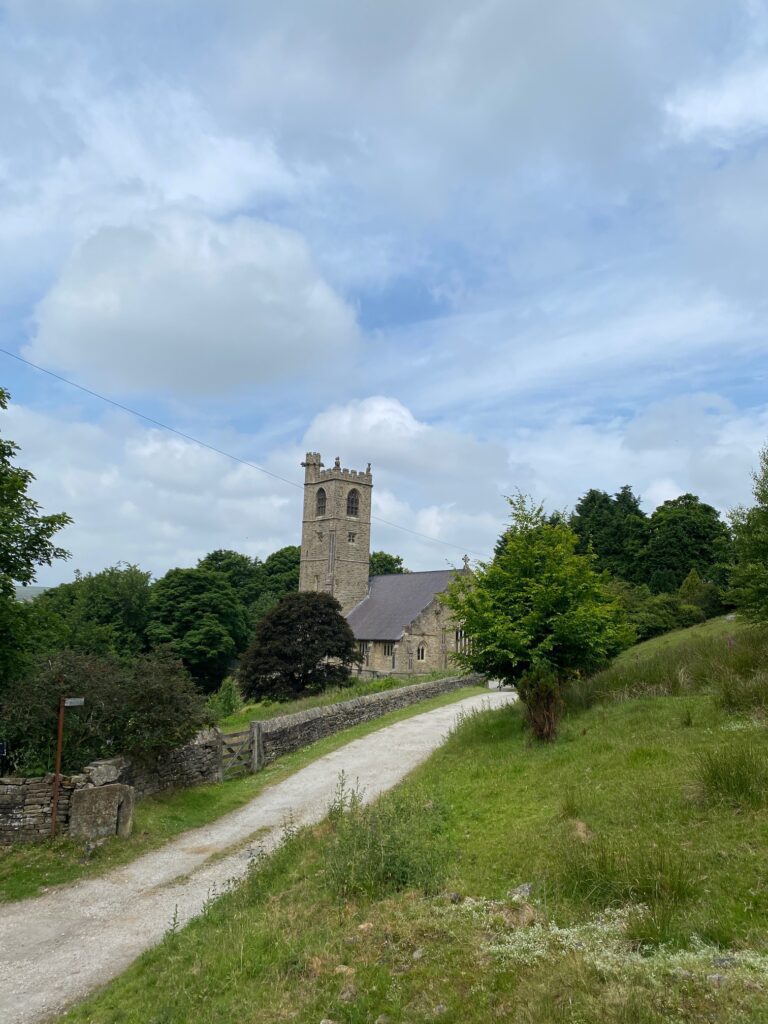 The church in Whitworth

Return back to the metal gate and turn right to descend into Whitworth Square. On the descent into the square you will see the set of stocks which have been there since 1683 and a note saying that the last person who used these stocks was a Dick Tattersall from Stid Farm for being drunk. There is also the vault for the Taylors Doctors graves. Pass in front of the Red Lion and opposite is a building called the Briars which used to be the doctors surgery. They were bone setters who attracted famous patients from far and wide including the Archbishop of Canterbury. Continue downhill and bear right at the mini roundabout and then left to the main road – A671, which is the main road from Burnley to Rochdale and has good public transport links. The A671 is the route of one of the few original roads in East Lancashire – the original turnpike road from the 18th century linked Manchester with Skipton.

Two hundred years ago members of the Taylor family, of Whitworth, a small hamlet near Rochdale were veterinary surgeons, or horse doctors, as the phrase was. Somehow, and this really is a mystery, they set their sights on humans and became the most celebrated Doctors in the country. They had many hundreds of clients , including the Archbishop of Canterbury, who would wait in queues around the Hamlet, sleeping in the cots provided or in the Red Lion if they had the money, to be seen. They took over much of the hamlet for recovery wards and the square was known as ‘cripples walk’ for the constant streams of the walking wounded taking the air.

It is difficult to create any short circular walks. An excellent but long day walk carries on with Stage 52 but comes off just before Cowpe Lowe and from here you can pick up the Pennine Bridleway north through Rawtenstall, Lumb and then on to Holmes Chapel in the Cliviger Gorge.