The remains of the Abbey at Sawley

A short section, which can be combined with the previous Stage or indeed the next Stage. Up and out of Downham to the cross the great Roman Road to York, before descending into Sawley with the remains of its Cistercian Abbey. Cross the River Ribble and then a road section, also part of the Ribble Way, to the village of Grindleton.

A map of Stage 22 can be found below courtesy of Ordnance Survey maps. You can subscribe yourself using this link, https://osmaps.ordnancesurvey.co.uk, which will enable you to import the GPX file which can be downloaded below.

At the Assheton Arms turn right heading towards its car park at the rear and look for the footpath signpost. Follow the lane around the side of the car park and head towards the gate at the end of the land. After the gate turn immediately left and cross the stile into a field. Gently climb up a few grassed ridges where steeply dipping limestone beds are exposed in some areas. You quickly reach the top of the ridge where a Roman Road crosses. It is easy to see the route of the road as you look to your right, which follows the ridges in the field.

This Roman road linked Ribchester with York via forts at Elslack and Ilkley. The direct route would have been blocked by Pendle Hill so the route skirts the hill.

Rather than descending the slope on other side of the ridge take the path that runs along the ridge and down towards some limestone outcrops in the far corner of the field. Then look for the stile in the fence to cross over on to a track. Turn left. At the main road, cross and take the path into the field opposite. Follow the edge of the field down to the bridge under the railway.

At the bottom of the next field look for the stile to the right, which takes you over to the stream, which occupies the valley bottom. Over the stream are the remains of an old stone bridge which functions as a footbridge. Cross this and then head up the steep incline straight ahead and which then turns left to a stile in the wall above. Cross over into the field. The path in theory makes its way straight across the field to the opposite corner but when I have been through this field it is often fully planted with crops. If so turn left and then right as you follow the outline of the field to reach the stile in the top left corner.

Follow the edge of the next field to another stile and then look for the gate n the fence, which takes you into a further field whilst continuing in the same NW direction. This will lead you to another stile, which exits on to main A59 carriageway. Please take great care crossing as this is fast section of road.

Take the path directly opposite on the other side of the road which then joins a track which takes you to a small tarmaced road. Take the stile opposite into the field and continue in a NW direction to the next field. You then need to bear left across this field heading towards the far corner of the walls of the ruined Abbey. The footpath actually exits the field by a stile into the car park to the right of the Abbey Archway. Exit the car park onto the main road opposite the Eagle and Child pub and restaurant, which is in the village of Sawley. 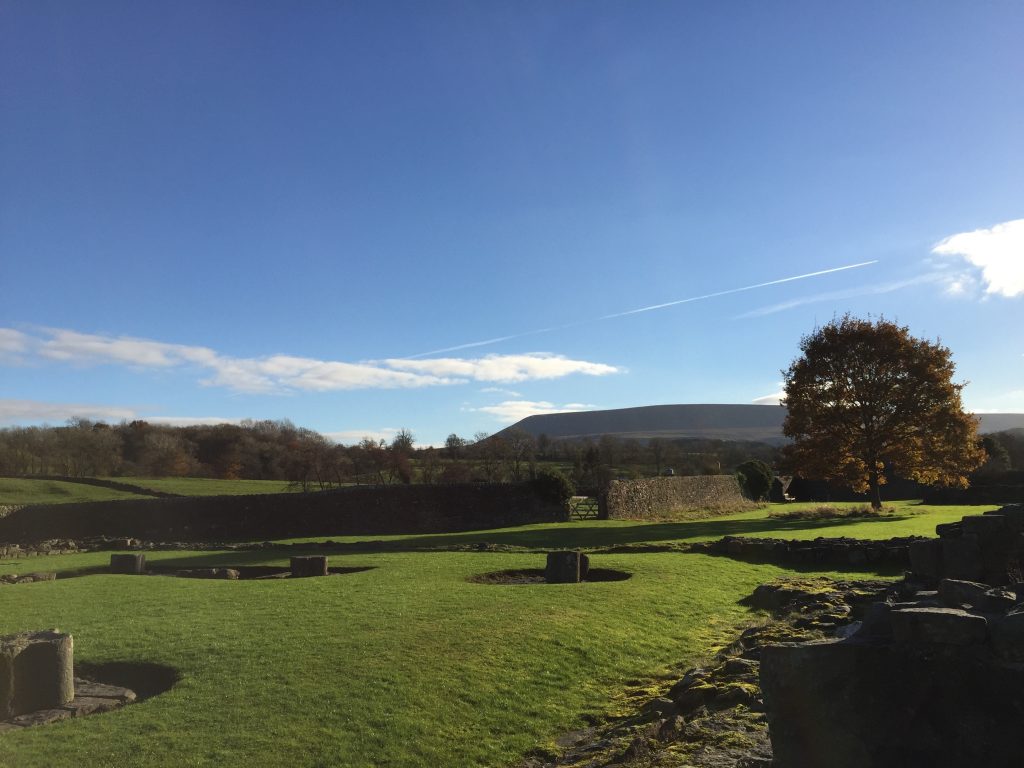 The grounds of the Abbey with Pendle Hill in the distance

Sawley is dominated by the remains of a Cistercian Abbey, a Grade I listed building, now controlled by English Heritage. Access is free so please do spend a short while investigating what remains – there are a number information boards which help. It dates back to 1147 when founded by a William de Percy and was dissolved in 1536, during the reign of King Henry VIII. The last two Abbots were both executed for their opposition to King’s break from the Roman Catholic church. 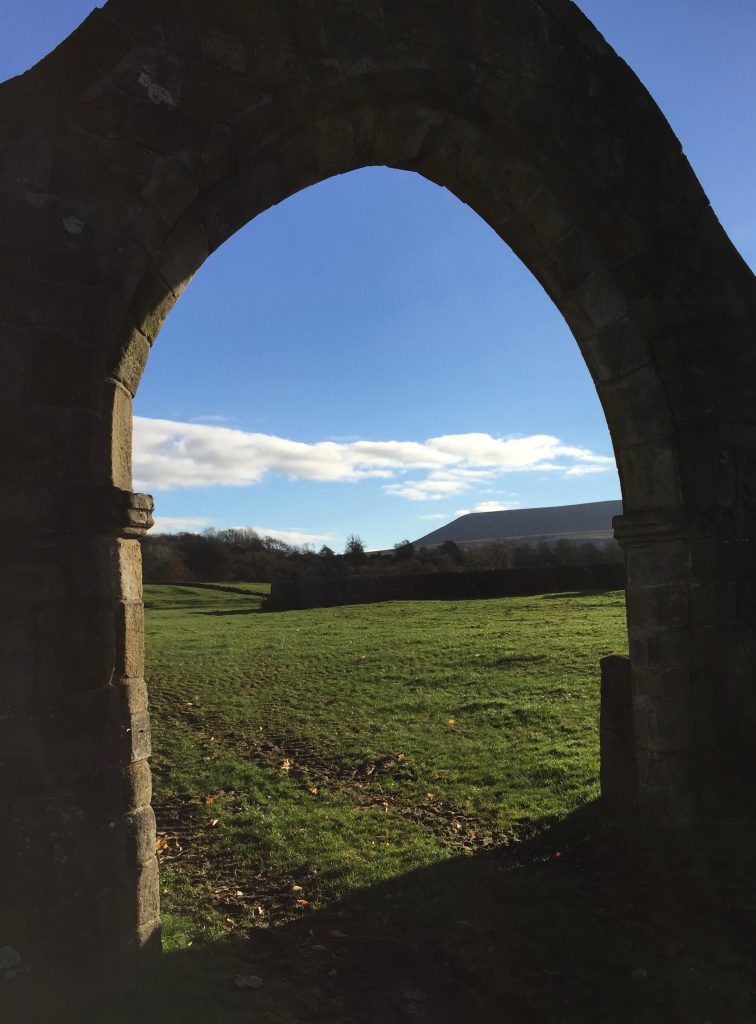 Take the road behind the pub, which follows the River Ribble down stream and then crosses it at the Sawley bridge. Immediately after crossing the bridge take the stile on the left and follow the path along the river bank for a short distance back to a road. 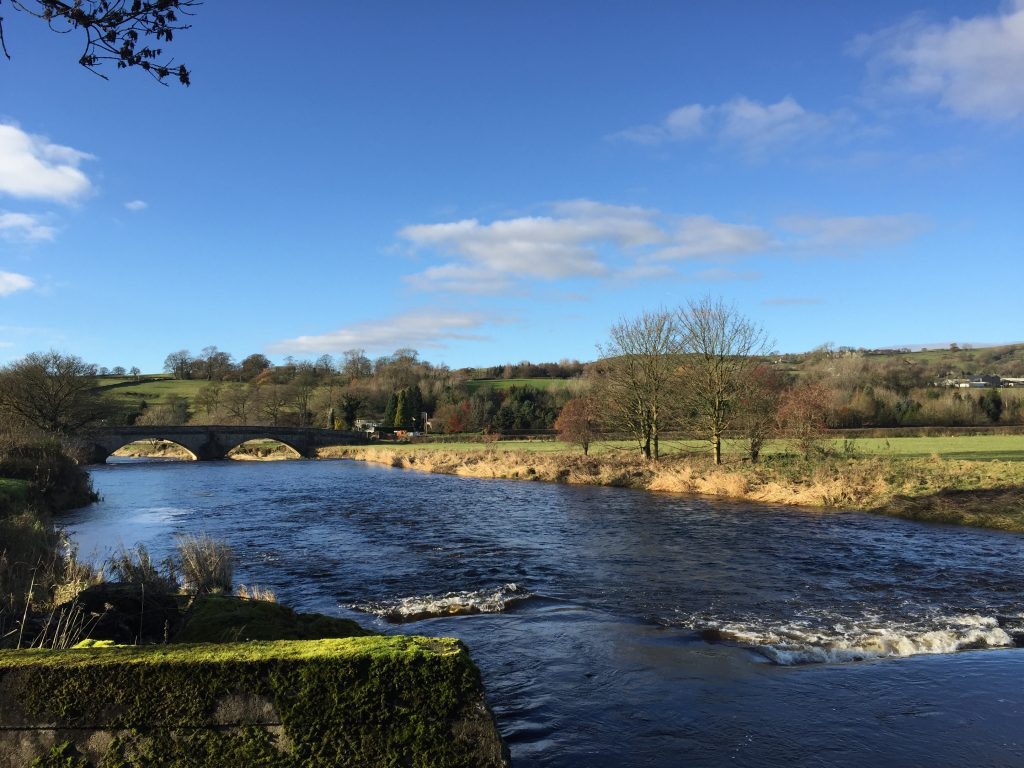 The Ribble at Sawley 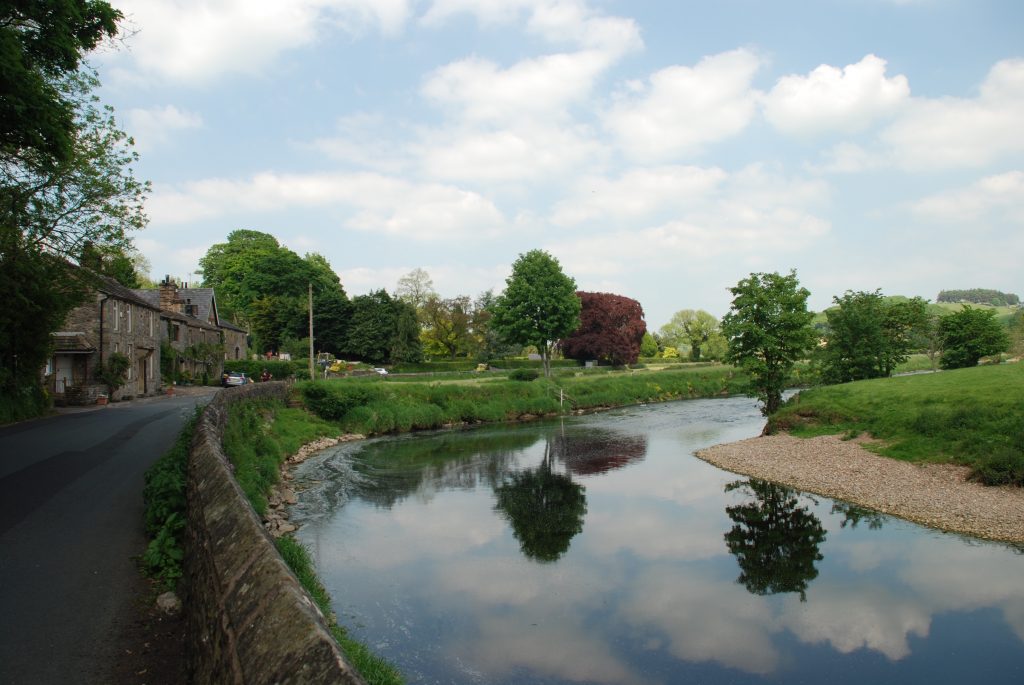 Another view of Sawley

Follow the road for about a mile until you reach the junction of roads in Grindleton. There are a number of paths, which run parallel to the road but generally the road is quiet and easier to traverse. On the corner of the cross roads with two pubs is a seat and an Information Board outlining the Grindleton Heritage walk – if you have time and energy it is a worthwhile diversion.

I do like Grindleton. Whilst not as pretty as the likes of Downham or some of its neighbours such as Waddington, it does have a good feel and honesty about it. The development of the village can be seen in the layout of the houses. The oldest cottages are built in rows at right angles to the main road, which makes its way up the hill. The cottages where largely used by hand weavers in the 18th Century before the Industrial Revolution lead to an exodus of people to the main towns in Lancashire. In general these would have had cottages gardens to the rear and front but you can quite clearly see that in later times, newer houses have been built between the cottages on their gardens and often parallel to the road, which is perhaps the norm now. In some cases very little room has been left at the front of the cottages.

Some of the many pretty cottages in Grindleton

Apparently the relatively isolated location of the village, which was often cut-off by the height of the River Ribble before any bridges were built, encouraged a number of fervent religious groups to concentrate in the village. The area occupied by Ivy House in front of Eccles Terrace, marked by Heritage No 3, was know as Hellfire Square as the various preachers ranted their sermons here. Later on you can see an old Methodist chapel set back on the right of the road. The main church of St Ambrose was only built in 1805 and is situated on the Sawley Road on the way into village. St Ambrose is the patron saint of beekeepers and this along with damson jam making was once a primary occupation in the village. 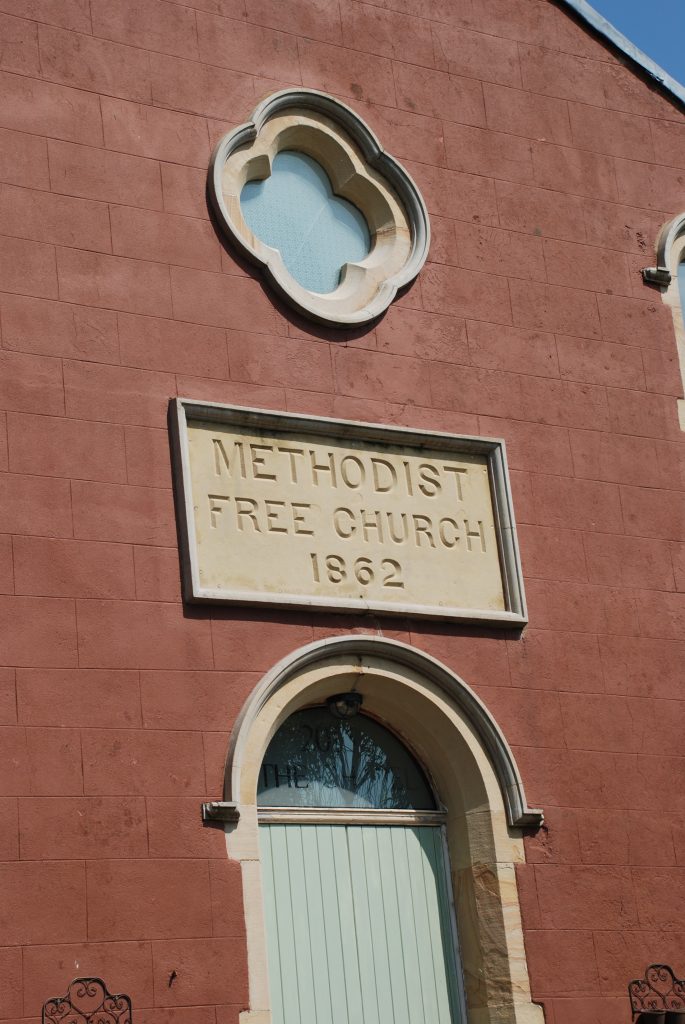 The Methodist Chapel in Grindleton – now a house!

There is a comprehensive history page on the Grindleton community website – www.grindleton.org.uk.

Unfortunately there is no accommodation in Grindleton itself. The only real options are to return to Sawley or take a taxi to nearby Waddington, which has several places to stay including the Waddington Arms and the Higher Buck, both great pubs with rooms. I encourage you to take this option as Waddington is one of the highlights of the Ribble Valley but unfortunately I could not work it into the Way.

Complete Stage 22. From Grindleton make your way to Chatburn by the road. Cross the main road and continue up Downham road. Find the path that comes off the road, which passes under the A59 bypass. Cross behind Worsaw Hill and Worsaw End and then return to Downham.