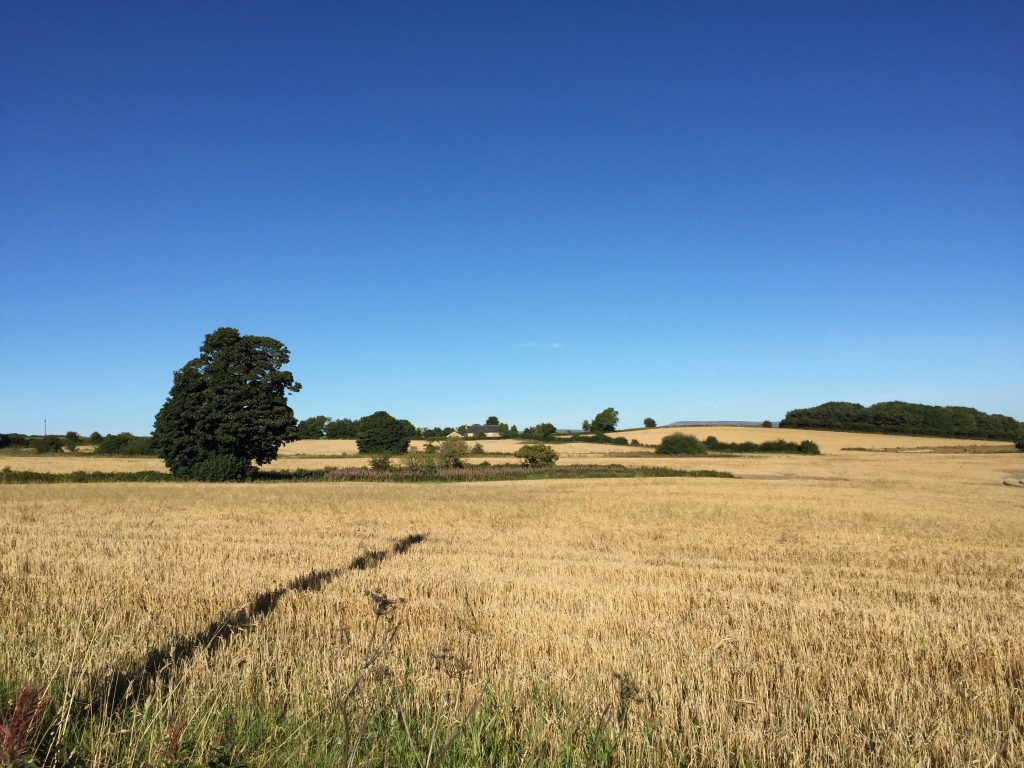 Fields near the High Moor with Winter Hill in the background

Finally some hills as we climb out of the Lancashire plain up onto a prominent ridge made of hard standstones within the Carboniferous Lancashire Coal Measures .Great views in all direction and one of my favourite parts of the walk. The first two summits are Harrock Hill (147m/482ft) and then Parbold Hill (120m/394ft). Take in the great views to the coast from Parbold Hill, including Liverpool (can you spot the Anglican Cathedral) and North Wales, and Blackpool Tower to the north, before descending into the Douglas Valley and then along the Leeds Liverpool canal into the lovely village of Parbold.

A map of Stage 6 can be found below courtesy of Ordnance Survey maps. You can subscribe yourself using this link, https://osmaps.ordnancesurvey.co.uk, which will enable you to import the GPX file which can be downloaded below.

Continue along the main road until you meet Dark Lane on the right. Follow this for about a mile until you reach a T junction. On the way, note the interesting church architecture of St Peter and St Paul – half house (rectory) half church – and good views of the tree clad Harrock Hill ahead. 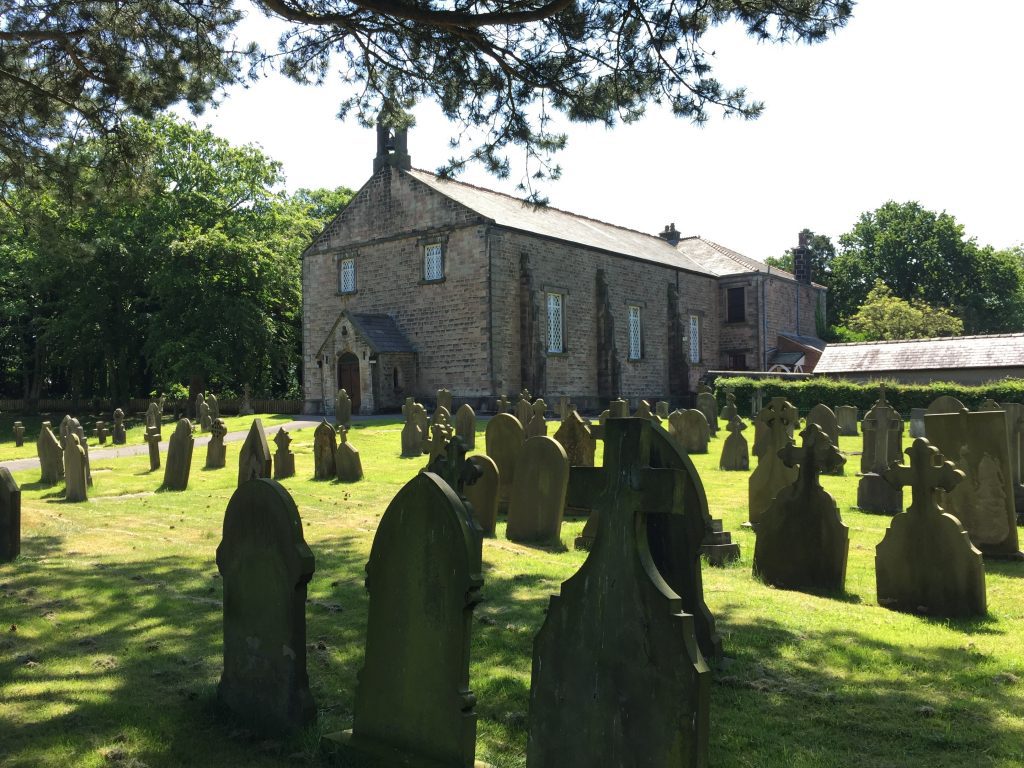 Turn left on to Anderton Mills and then take the next right into Sanderson Lane. We now begin the small climb up to summit of Harrock Hill- our first real climb of just 420 feet. There are excellent views to the left across to the West Pennines, and coal used to be mined on the right of the road, although no remains exist. Towards the top, the lane bears left but we need to take the track to the right by the brick cottage, which will take us to the summit of Harrock Hill. Continue up this track between another cottage on the right and some farm buildings on the left. 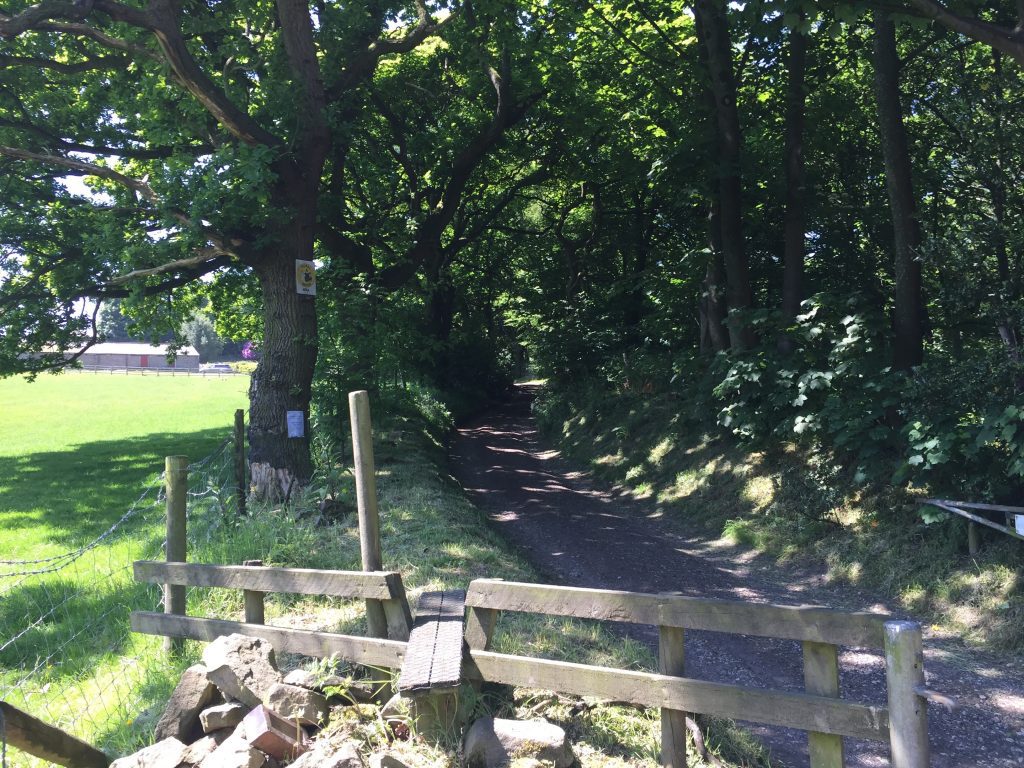 The track up to Harrock Hill

Pass through the pedestrian path to the side of the gate and then follow the narrow walled track to the summit. On your left you will see a metal gate with a style of sorts, which is the continuation of the route but before that lets take a small detour to the remains of a windmill. I have tried to research the history of the windmill but with little success, other than the fact that it was destroyed by fire in 1880. I can only assume that it was linked to the corn mill in Anderton’s Mill, which also had a windmill. Anderton’s cottage dates back to 1799. The views from the windmill are unfortunately largely obscured by trees these days but you can see why the windmill would have been sited here with winds blowing across the Lancashire plain from the Irish Sea with no interruption. The basement of the windmill is set into quarried sandstone and appears to have allowed access directly into the windmill by cart to carry the corn to, and the flour from, the mill, presumably back down into Anderton’s Mill. 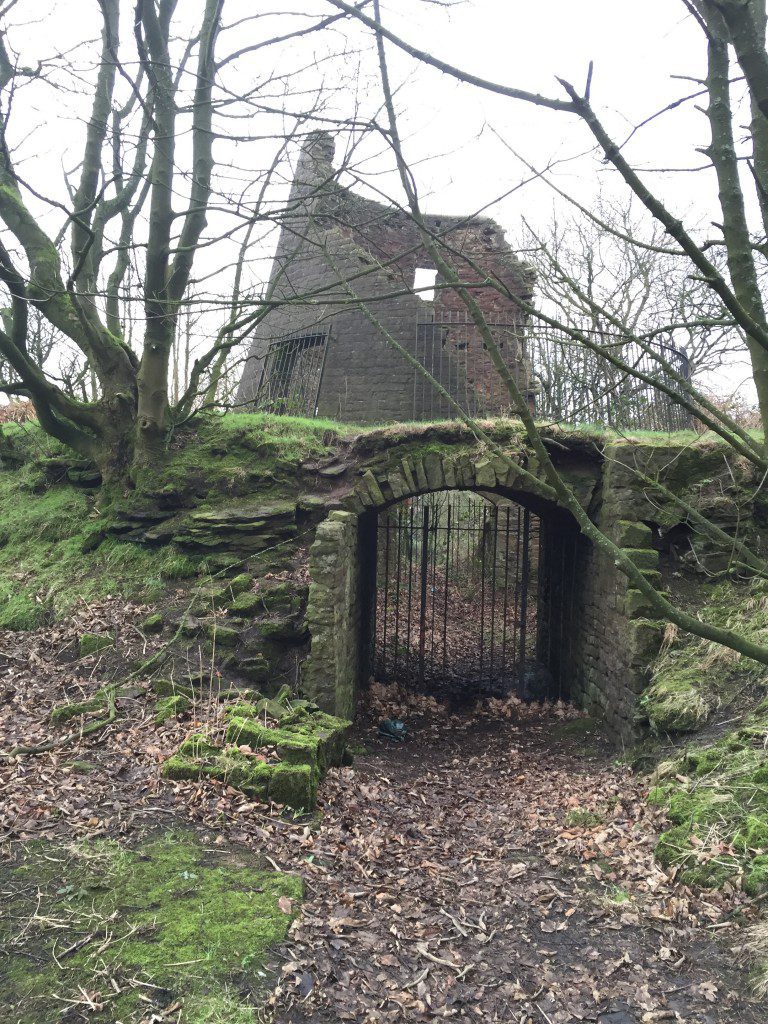 The remains of the windmill on Harrock Hill

Retrace your steps back to the stile and cross onto the path in the field, which runs south west away from Harrock Hill. The path follows the boundry of the field, with a small dog leg and then up to the top of another small hill with a mast on it. There are more excellent views east and north. Just before reaching the summit, which is actually Harrock Hill Service Reservoir, at the end of the small wood, take the path on your right which then descends in a SW direction and finally to a single track tarmaced road. This services Harrock Hall, which nestles in a glade on the side of the hill and is therefore not really visible from the route. It dates back to the early 17th Century and was recently restored. Turn left and follow the tarmaced track until you reach the main road. Turn right past the High Moor Restaurant, which does serve drinks or you can carry on to the Rigbye Arms further along the road but just off the route. Take the first left into Broadhey Lane. The lane turns right and at this point continue straight on along a muddy track which then becomes a path. Along this quiet and relatively high section of this stage there are good views both east to Winter Hill and you should be able to pick out the tip of the Ashurst Beacon due south and the horizon. Continue straight on then bear right at a sink hole, cross a stile and then bear left to another stile to pick up the line of the original path. Carry straight on along the enclosed path and then exit this via another stile and then head to a stile in the bottom left hand corner of the field. Cross over the stile, turn right and head along the track to reach the main road. Turn right and within 100m you will reach the summit of Parbold Hill, and the potential for a meal and drink at the Miller and Carter pub – once the Wiggin Tree pub. Find the metal view plaque to see sites along the west coast of Lancashire, including Liverpool and the Welsh hill beyond that. 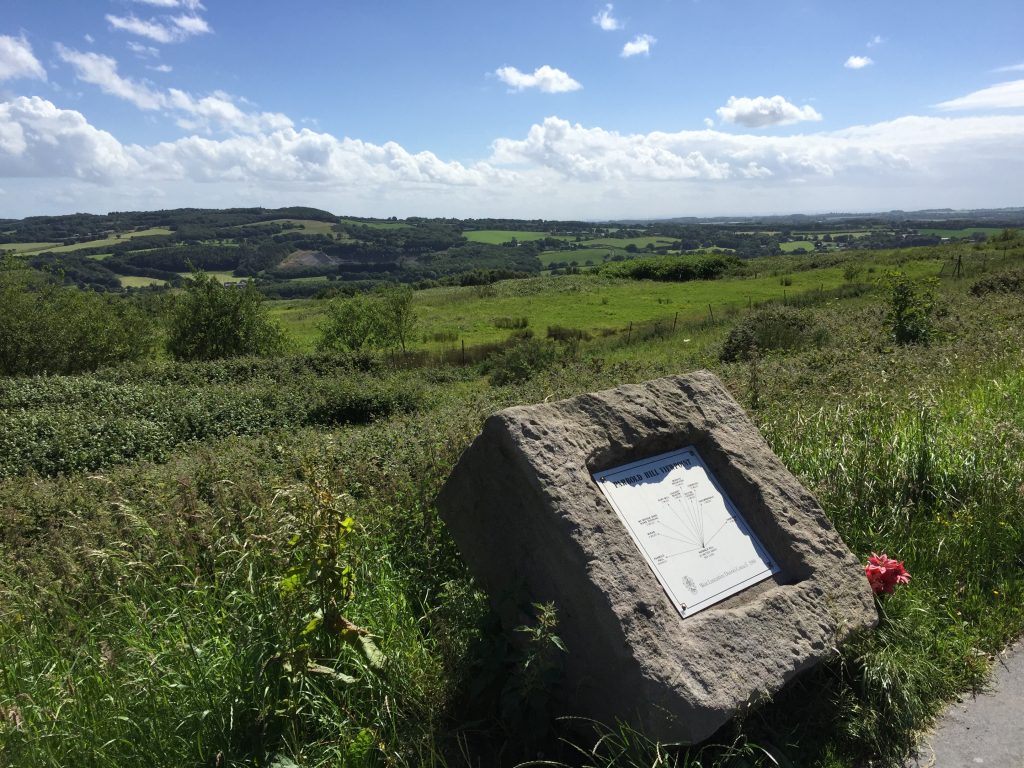 The view point on Parbold Hill

On the other side of the road to the Pub, and more often than not obscured by an Ice Cream van, you will find a path descending the hill in an approximately southerly direction to the Leeds Liverpool canal and River Douglas in the bottom of the valley. There are excellent views to your left down the Douglas Valley and you should be able to pick out the M6 Viaduct at Gathurst, the chimney of the Heinz factory just behind the bridge and the arches of the DW Stadium in Wigan – more of which later. On a clear day in winter you can often see beyond to Manchester with the Peak District and Pennines behind, often coated white in winter.

Shortly after leaving the road you will skirt a quarry, which is one of several in this area making use of the thick hard sandstone. In fact a large part of the hill here is an old quarry, which was then used for waste landfill – you may have noticed the gas vents at the top of the hill. When you reach a track continue straight ahead, over the Wigan to Southport railway line and then you will reach Bridge No 40 on the Leeds Liverpool Canal. This is our first meeting with the canal, which will become a familiar friend in the Stages to come. Just beyond the canal you should be able to see the River Douglas. 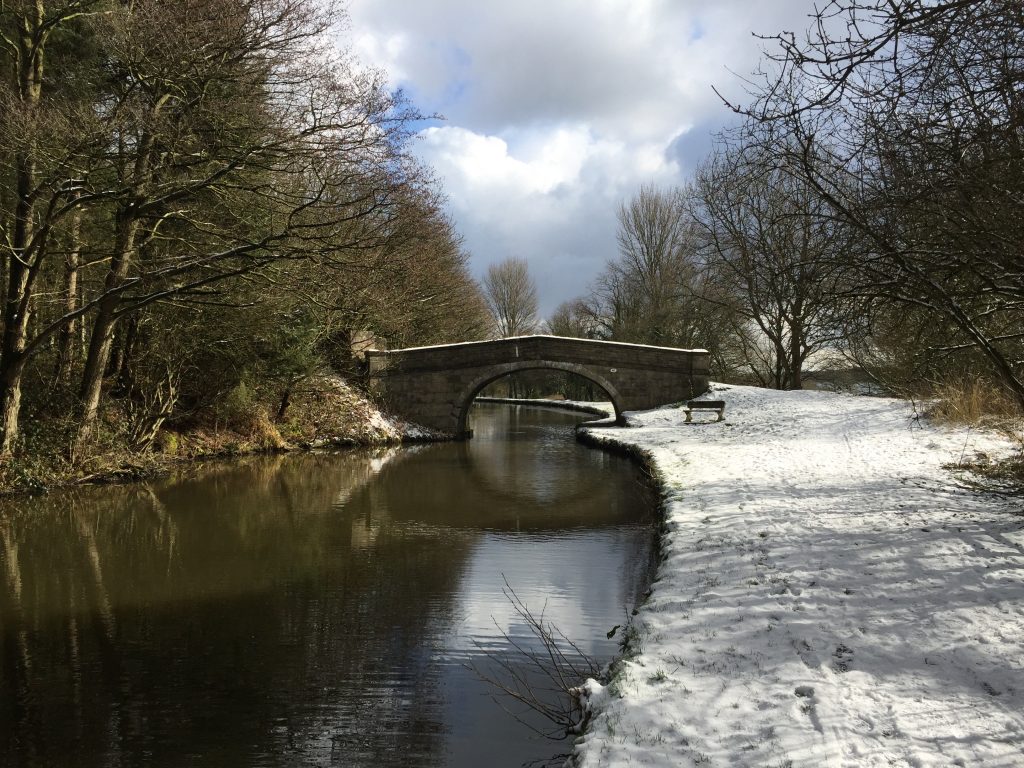 Bridge No 40 on the Leeds Liverpool canal – one of my most favourite spots in Lancashire!

From the canal bridge turn right and follow the canal towpath for just over a mile all the way to Bridge 37, which is in the centre of the village of Parbold. Ascend to the main road over the canal and the Stage ends at the Windmill pub just opposite to the left.

We are now approximately 26miles from Liverpool with just over 100 to go before Leeds is finally reached. The western section of the canal was begun in 1770 at Hallsall on the West Lancashire plain and the section to Wigan, which we have been walking along, was completed in 1774. However, this was almost never built. The original course of the canal was to veer north at Parbold and head towards the Ribble at Preston, via Eccleston and Leyland. Just before you come to the end of the Stage, the canal turns left through ninety degrees and on the opposite bank you can see a small section heading almost straight on with a dry dock beyond and there is often a large canal barge called the Rose of Parbold docked here. This was infact to be the original much shorter route of just 109 miles rather thanthe 127milesof the final course and was favoured by the Yorkshire contingent, who wanted the quickest possible and therefore cheapest route to Liverpool.

At the beginning of the next Stage the canal crosses over the River Douglas and originally the River Douglas in the form of the Douglas Navigation was used to link Wigan with the canal, which not only then allowed access to Liverpool but also the River Ribble via the Rufford Branch, which we saw earlier in the walk – Stage 3. The canalization of the Douglas was passed in an Act of Parliament on 1720 but it took 22 years to complete. However, this was not very satisfactory. The Liverpool contingent had wanted the routeto take in Wigan with its coalfields and then east Lancashire with its cotton mills. This would enable it to generate more traffic and therefore more income. Whilst the ultimate course of the canal was still being debated it was agreed that an offshoot of the canal would be built to link Wigan with Liverpool, and this terminated in the centre of Wigan at Wigan Pier – more of which later. With the completion of the Parbold to Wigan section in 1781, all the original funds and additional borrowing had been used up and with the war in American Colonies taking up time and resources, all construction ceased and did not resume again until ten years later in 1791.

http://www.mikeclarke.myzen.co.uk/Parbold%20to%20Dean.pdfprovides a brief history of the section of the canal from Parbold to Dean Lock. This is taken directly from Mike Clarke’s definitive book called “The Leeds Liverpool Canal – A guide and history” – well worth a read.

Parbold as a village owes much to the canal and then the railway, which arrived in the mid 19thCentury. Before that it was series of isolated hamlets and farms. The windmill was constructed in 1794 but ceased operating only 50 years later. The hard sandstones in the area resulted in quarrying, which were then transported by barge. The arrival of the railway saw a boom in population as it quickly became a commuter town for the well off and it largely remains that to this day. 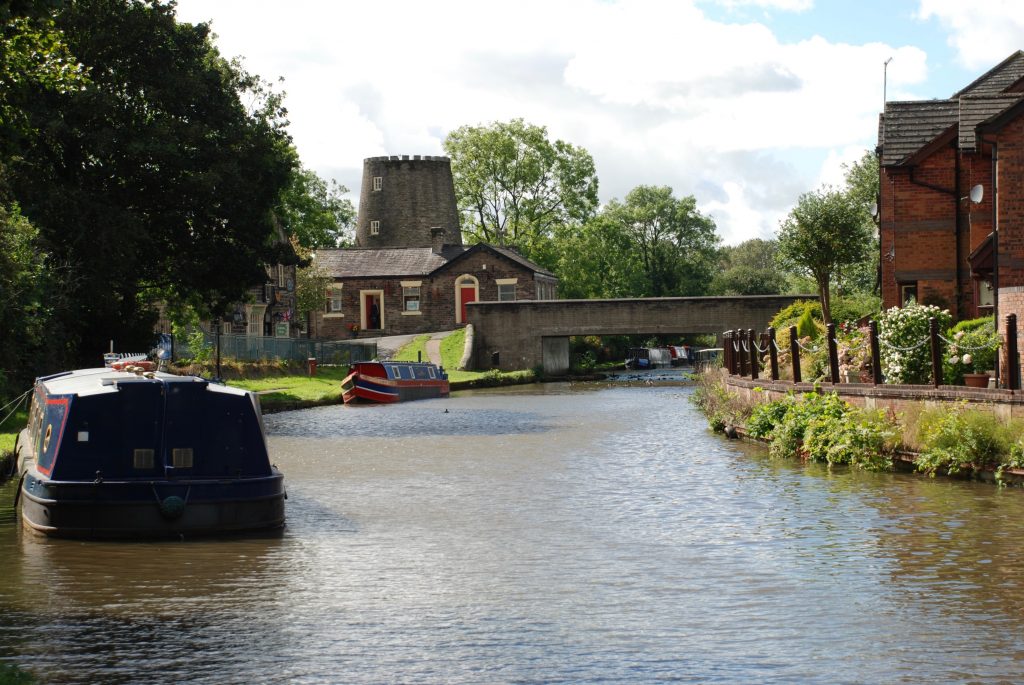 The canal in Parbold with its Windmill

There are shops in Parbold and a railway station – both along the road to the right. The Windmill Pub is highly recommended for drinks and food and opposite is a lovely cafe called Yours is the Earth. And finally the property which includes the Windmill itself is a lovely art gallery with a resident artist called James Bartholomew – please do check it out!

Accommodation can be found after about a quarter of a mile into the next Stage on the A5209 in Newburgh at the Red Lion or alternatively east in Wrightington or at the Premier Inn at junction 27 of the M6.

Follow Stage 6 to the High Moor restaurant. Rather than turning left down  Broadhey Lane continue on to the Rigbye Arms and take Stoney Lane down into Parbold. Turn right and walk through Hilldale. At the Richard Durnham School turn left and approach Mawdesley via Sill’s Farm and Old Lane. Call in at Cedar Farm with its shops, galleries and café. Total distance 7.5 miles.