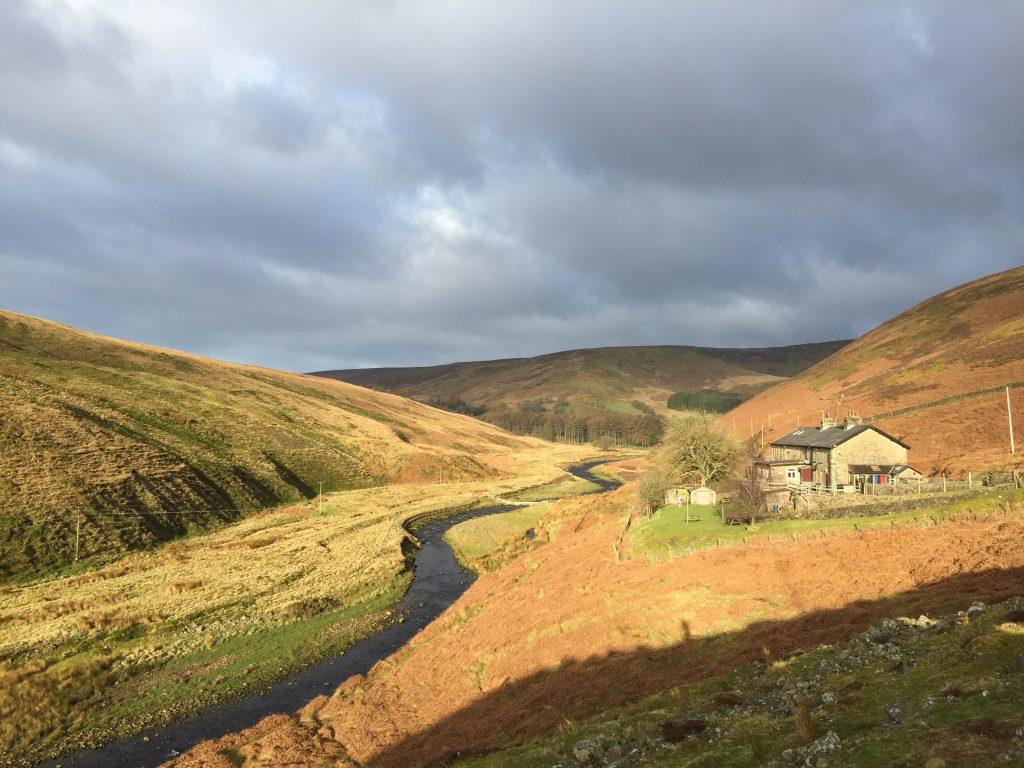 Another great day in very heart of the Bowland Fells, including the Trough of Bowland. We follow Langden Brook for sometime before the steep climb up to Fiendsdale Head, which is the watershed between west and east with great views to the Irish Sea. A descent into Chipping via Fair Snape Fell and Parlick.

A map of Stage 25 can be found below courtesy of Ordnance Survey maps. You can subscribe yourself using this link, https://osmaps.ordnancesurvey.co.uk, which will enable you to import the GPX file which can be downloaded below.

Begin at the Post Office/Puddleducks Tea Rooms in Dunsop Bridge. Cross over the River Dunsop via road bridge and follow the road around a bend and up a short hill. At the top of the slope is a War memorial. Turn right here and follow the lane past the row of houses. After about 400m the road bends to the right in front of a property called Closes Barn. Just after the buildings look out for a footpath on the left which heads around the back of Closes Barn in westerly direction. Follow the path in a westerly/south westerly direction to the road.

Turn right and follow the road. After a few hundred meters there is a track on the left which heads down to and across the river towards Hareden Farm. After crossing the river look out for a style on your right just before a gate. Cross over the stile and then cross the small stream by the flat bridge. Then turn right and head back to the main river. The paths on the OS map suggests that the path makes its way through the walled field next to the river but the path on the ground suggests that you make your way between the wall and the river. Access this and the river bank by the stile at the bottom of the field.

After about 200m cross the stile over the fence into another field and then keep following the river – Langden Brook – upsteam until it turns ninety degrees left with a wooded area on the opposite side. Also on the other bank you will probably see cars parked by the side of the road together with a mobile food van and/or ice cream van. This is a popular stop en route through the Trough of Bowland. 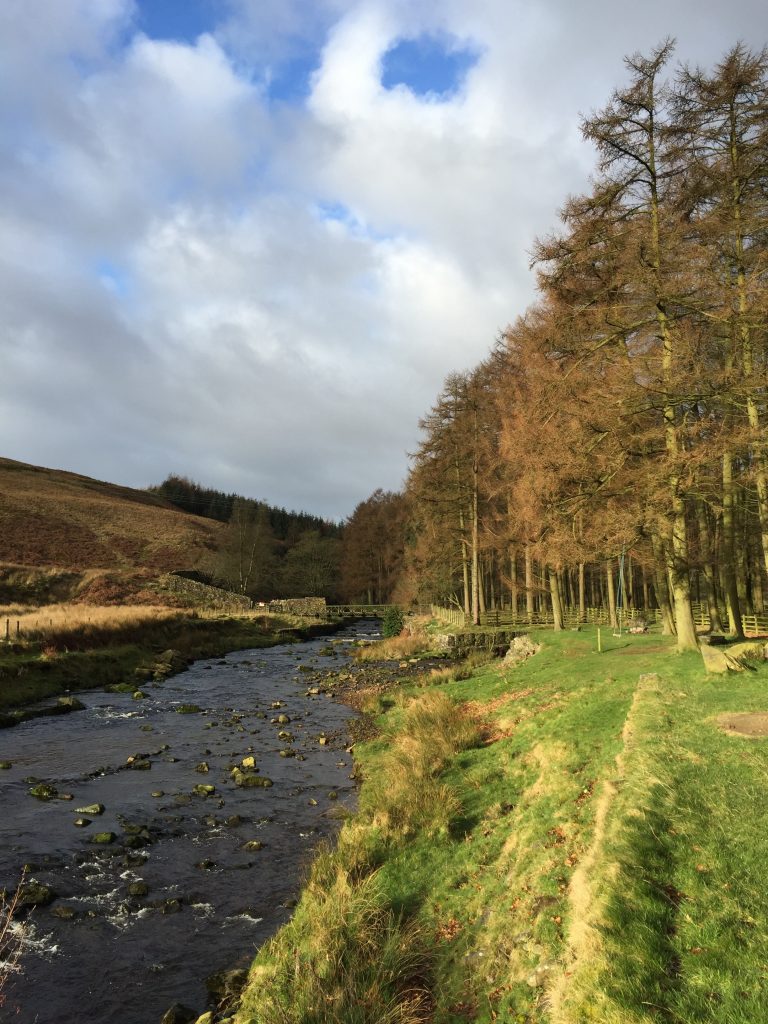 Langden Brook in the Trough of Bowland

Just after the bend in the river look out for a footbridge and use this to cross to the other side of the river. Cross over on to the single-track road which passes through the small wood and turn left and follow this up the valley.

In total we will walk for about 2.25miles before we leave Langden Brook and climb out of its valley. The path is largely self explanatory. The tarmaced road gives way to a stony track after a small water treatment works. Always keep to the lower road as there are one or two tracks off to the right. Eventually you will reach a building – grandly called Langden Castle and on the OS Maps followed by the word “ruin” in brackets. The latter is the more accurate as it is just an old shooting cabin with an ugly corrugated iron roof.

Shortly after the cabin leave the track and follow a footpath across the boggy ground further up the valley. The path is marked by a substantial Peak and Northern Footpaths Society metal footpath sign marked Fiensdale Head and Bleasdale. Continues straight on across boggy ground, sometime helped by duck boards etc and eventually this deposits at the Brook. We need to cross Langden Brook just after another stream joins it from a deep valley to the south. This is Fiensdale Water and we are going to follow its valley up to Fiensdale Head, a further 1.25 miles further on. 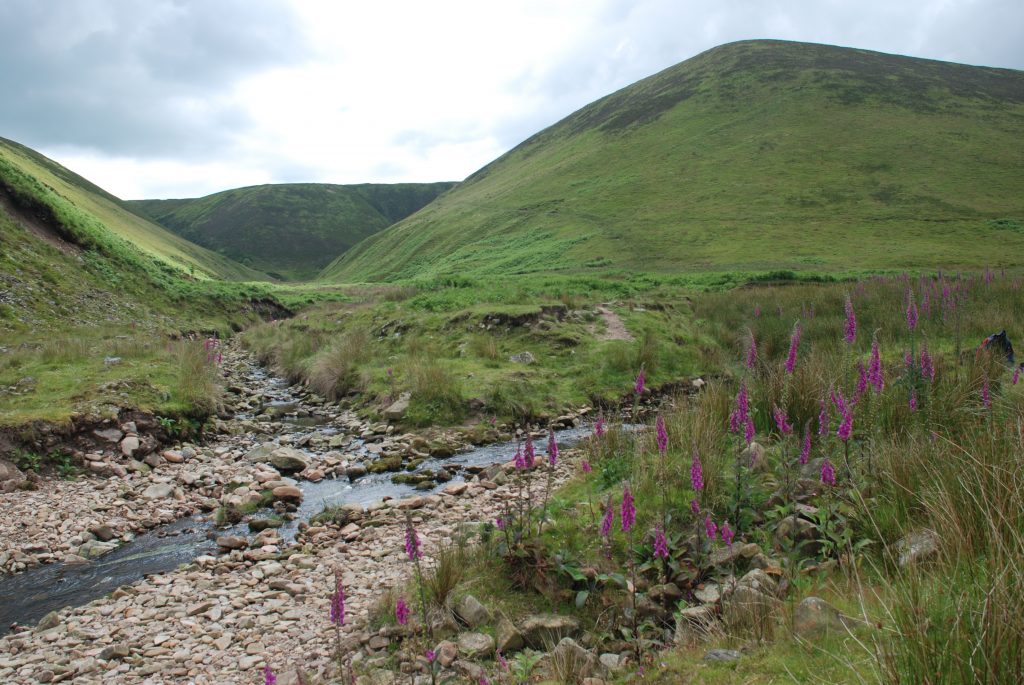 There is no bridge across the brook so find stepping stones to keep your feet dry. The path then heads up Fiensdale Nab ie spur of the valley the westerly/right side of the valley. The climb is initially steep but thereafter is more gradual. The path is good and distinct passing rocky faces and then at the top makes its way through cloughs in the peat. At this stage, particularly when wet and misty, you may doubt that you are following a path as it becomes a stream surrounded by heather, but trust to your senses. At the very top you will pick up a stone fagged path, which takes you to the very top, which is marked by a gate in a boundary fence.

There are excellent views from here west to the coast across the Fylde Peninsula.

Eventually you will almost reach the summit, which is marked by the meeting of three boundary fences. But just before this you will note improved paths and then a flagged path on the other side of the fence. Keep on the left of fence pass and you will then reach a cairn with a marker pole inserted in it and a kissing gate to your right. Use this to pass through to the other side of the boundary fence and pick up the flagged path.

From the summit we will follow the boundary fence that heads south-west and then turns slightly east of south.

You can head across to the trig point at the top of Fair Snape Fell (510m) but there is not a distinct path across to it and I would not advise in poor visibility as it is easy to get lost and disorientated. In mist please just keep following our boundary fence keeping it to your left. Ignore the kissing gate just after the summit, which takes you through the boundary fence and then along a new stoned path in an easterly direction. There are other fences that come off our boundary fence – do not follow these but use the stiles to cross and keep our boundary fence to your left.

The route then begins to descend the spine of the hill and before the bottom of a dip in the hill, before the climb to Parlick, we pick up a more substantial path that comes down from Fair Snape Fell. Follow this to the bottom and then take the less defined path on the left which continues to follow the boundary fence. Apologies for keep mentioning boundary fence but hopefully by now this is firmly in grained in your mind. Do not cross on to the other side of the boundary fence.

The path then heads up the spine of the hill to the summit know as Parlick at 432m. Along this stretch you will probably see gliders and parascenders using the thermals, which come up from the valley below. Climbing up to Parlick and looking back to Fair Snape Fell – note the boundary fence!

At the summit of Parlick  cross the boundary fence to reach the cairn, which marks the summit. Then descend the hill continuing along our fence – the path is not very distinct but easy to follow. After about 200m you reach a more substantial path. Turn left and follow this, which descends to the road at Fell Foot.

Originally I was going to continue along the boundary wall at the bottom of Parlick in an easterly direction towards Wolfen Hall and then pick up the single track road down to Wolfen Mill, which has accommodation. However, the path is poor in parts and cows and a bull sign make the route difficult particularly if you have almost completed 20 miles that day.

So the route joins the road at Fell Foot and follows this straight on to the T junction. Turn left and follow the lane into Chipping. Ignore a couple of roads off to the left.

The Stage ends at the Parish Church of St Bartholomew’s in the centre of Chipping at a T -Junction. 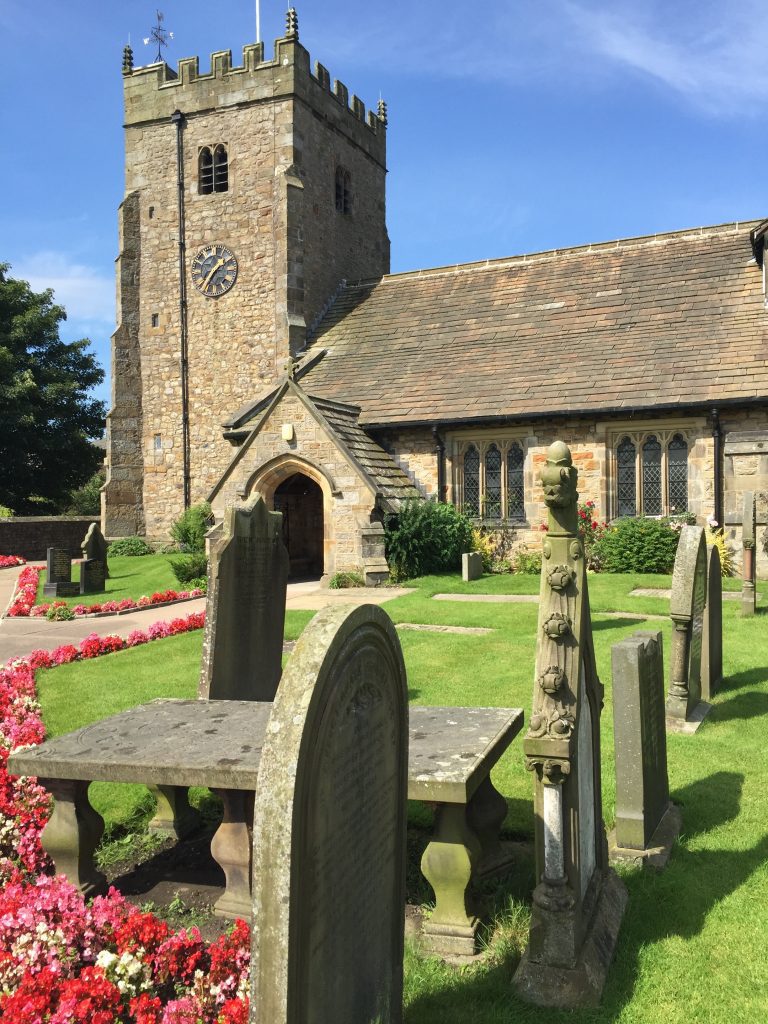 There is no accommodation within Chipping – the pubs (the Sun Inn and the Tillotsons Arms) only provide food and drink. The best option is the Derby Arms, which is on the Chipping Road/Elm Brow on the way to Longridge or Ferrari’s Country House also near by. They are about 3.5 miles way so will require a taxi. There are taxi firms based in Longridge. The more local alternatives are the Gibbon Bridge Hotel just outside Chipping but it is quite expensive and more of a wedding venue than a walkers overnight stop. It is also worth trying Wolfen Mill, which is just outside Chipping on the Way and has 10 holiday homes/cottages.

Click here to go to the Fifty Mile Route

Walk Stage 25 and then return to Dunsop Bridge by walking the Alternative Stage 25 in reverse. The total distance is unfortunately 17 miles with a considerable ascent.

There are two other options, which are slightly shorter but these do not complete the full Stage. The first is an excellent walk but hard. Complete Stage 25 as far as Fiensdale Head. Follow the Stage then along the boundary fence to the summit to the NE of Fair Snape Fell. From here head east on a good new path. At the point at which it turns south and heads down the hill known as Saddle Fell you have a choice. You can continue along the boundary fence/wall in an approximately easterly direction and then turn NE to the summit of Totridge. There is a path but it difficult to follow at times and there are numerous peat bogs to traverse. Do not be tempted to cut the corner – keep to the boundary wall. From the summit there is a steep path down the NE slope of Totridge, which meets a concessionary way. Follow this and the footpath down to Hareden Farm and the main road. You are now back at the beginning of this Stage.

Alternatively, you can descend Saddle Fell to Saddle End Farm and then onto the quiet lane. Turn left and head NE along the single track road. This becomes a track and then a road again at Lickhurst Farm. There are ways to avoid the road but it is quiet and quick with good views down to the Hodder. At Burholme Bridge cross the Hodder and then use the footpaths, which take you to Thorneyholme Hall and Dunsop Bridge.

A slight detour is to take refreshments at the Inn at Whitewell – a great pub – make sure that you go outside at the back and sit on the terrace overlooking the River Hodder and with great views up the valley. The Inn can be accessed by taking any of three paths, which pass New Laund Hill and Farm. From here take the path down to the river, where stepping stones allow you to cross the river, unless the river is particularly high. There used to be a bridge further upstream but the only remains are the supports on either side of the bank.