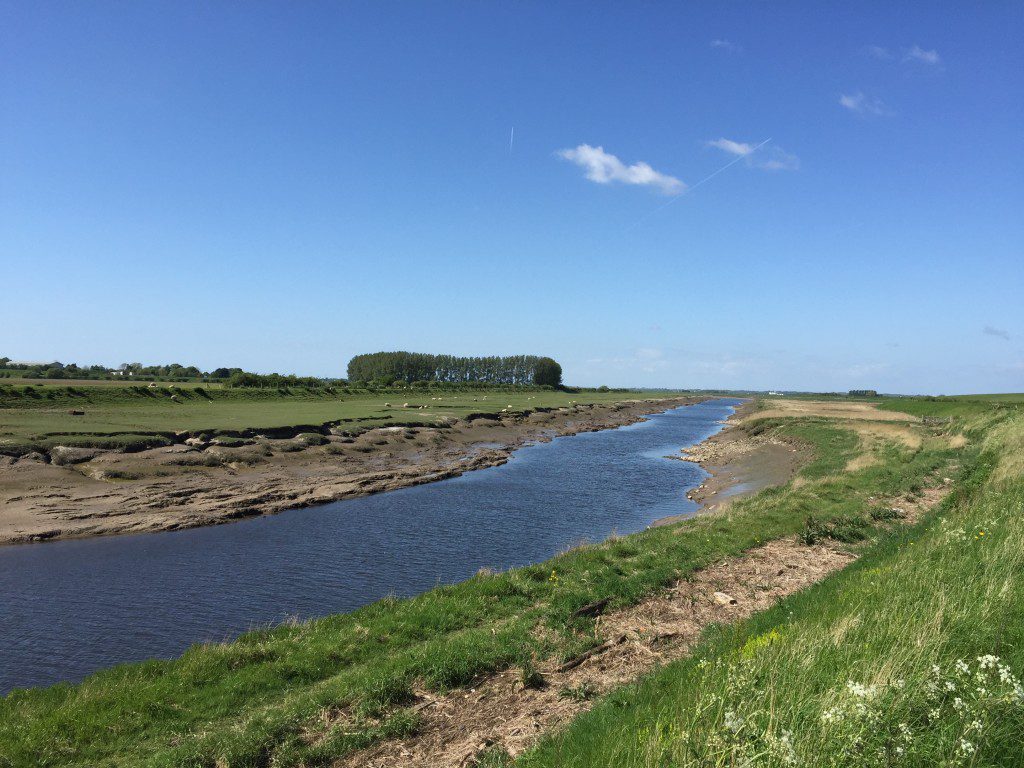 The channel of the River Douglas not far from the Ribble Estuary and the Irish Sea.

A map of Stage 3 can be found below courtesy of Ordnance Survey maps. You can subscribe yourself using this link, https://osmaps.ordnancesurvey.co.uk, which will enable you to import the GPX file which can be downloaded below.

From the Dolphin pub, turn right and follow the road/track for a short distance, then over the stile and then ascend up on to the embankment. The embankment is about 10 foot high and protects the farmland to the east from river’s floodplain to the west. Turn left and head south along the embankment. Although, as we will see, it wanders and meanders much like the river, it is easy to follow and mainly dry under foot. At the end of the first section you will come across a stile ahead with a footpath sign. However, ignore this and turn right and continue along the embankment in the direction of the river with better views of the river channel and the flood plain above. Before long we turn left by ninety degrees and the embankments ends at stile. Use another stile opposite to enter a strip of newly tree planted land. At this point we turn away from the river for a short time and circumvent a small hill on its eastern side away from the river. The small hill is actually an old rubbish tip and you will see many vents for the gases from the decomposition of its contents. Its location is curious to say the least! Follow the strip of land keeping the hill to your right. At the end of the planting are two high stiles, which allow you to cross through what appears to be a multi-gated animal pen. Continue along the strip of land keeping the hill to your right. The path follows the grassy slope rather than the track. At the end of this is a stile, which takes you over onto a road and the gated entrance to the hill/tip. Look for the stile on the other side of the road, cross over the stile and continue along the strip of land. After a short distance cross another stile and then climb back up on to the embankment. The walk now continues almost parallel with the river channel and the flood plain above has numerous small ponds which testify to the frequent flooding of the plain.

At the point at which the river turns sharply right you reach the junction of a number of tracks and paths. The track, which continues straight on, takes the route of an old railway embankment. However, we will turn sharp right and continue to follow the flood embankment parallel with the river. Before long you can see the Marina and boatyard at Tarleton/Becconsall/Hesketh Bank, which testifies to the past importance of this village, when the river was used to carry goods up to the Ribble and either into Preston or coastal bound. 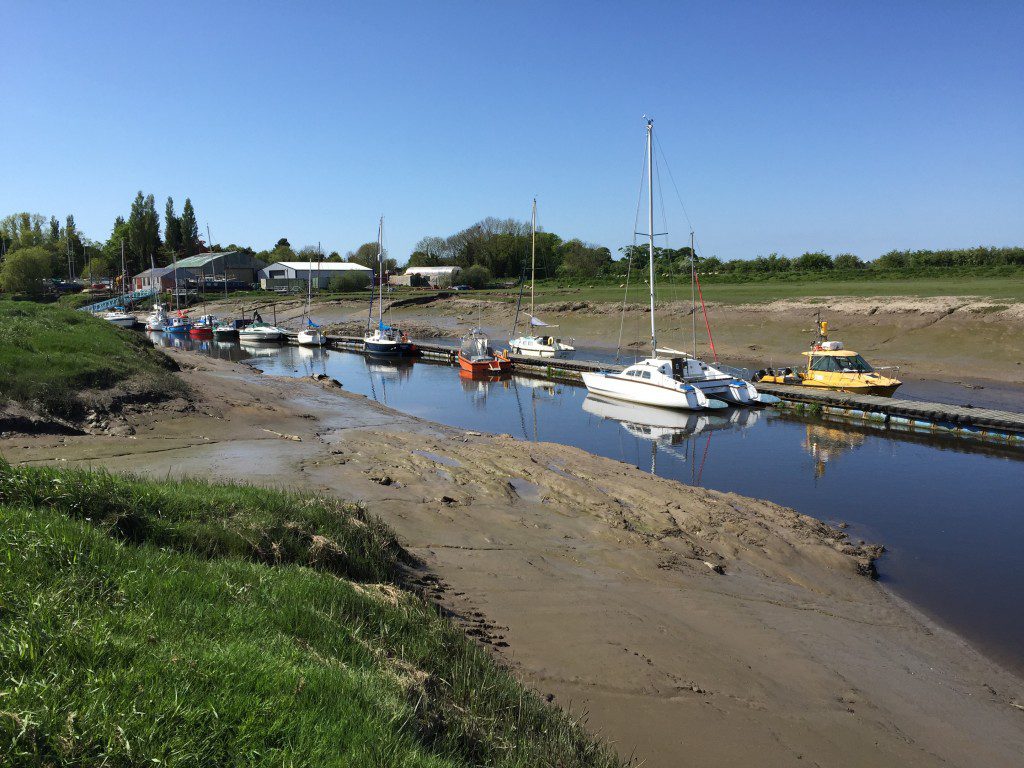 The marina at Hesketh Bank.

Written by David Edmondson, it describes the maritime history of the villages – “We built this village on Rock’n Coal”. For about 100 years it rose to prominence as a maritime centre, including some ship building, before reverting back to agriculture. 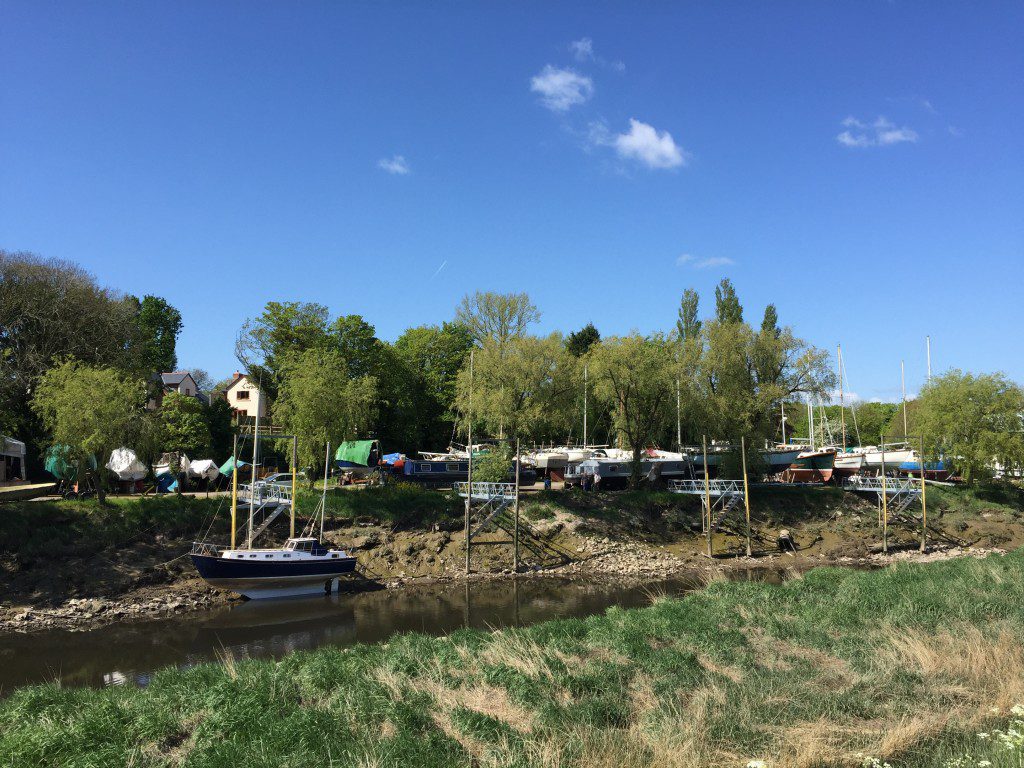 The Boatyard at Hesketh Bank.

Continue along the embankment as it follows the line of the river, past the brick remains of what was presumably a bridge, which took the railway over the river. When the river turns left look out the lock on the opposite bank. This is the end of the Rufford branch of the Leeds Liverpool Canal, which allowed boats to travel from Wigan/Liverpool to Preston – more of this later. The main cargo was of course coal, but a concession for the landowners, who gave up land for the building of the canal, was the right to transport toll free manure and sewage from the industrial towns, to feed the land and help in the reclamation of this part of the coast. 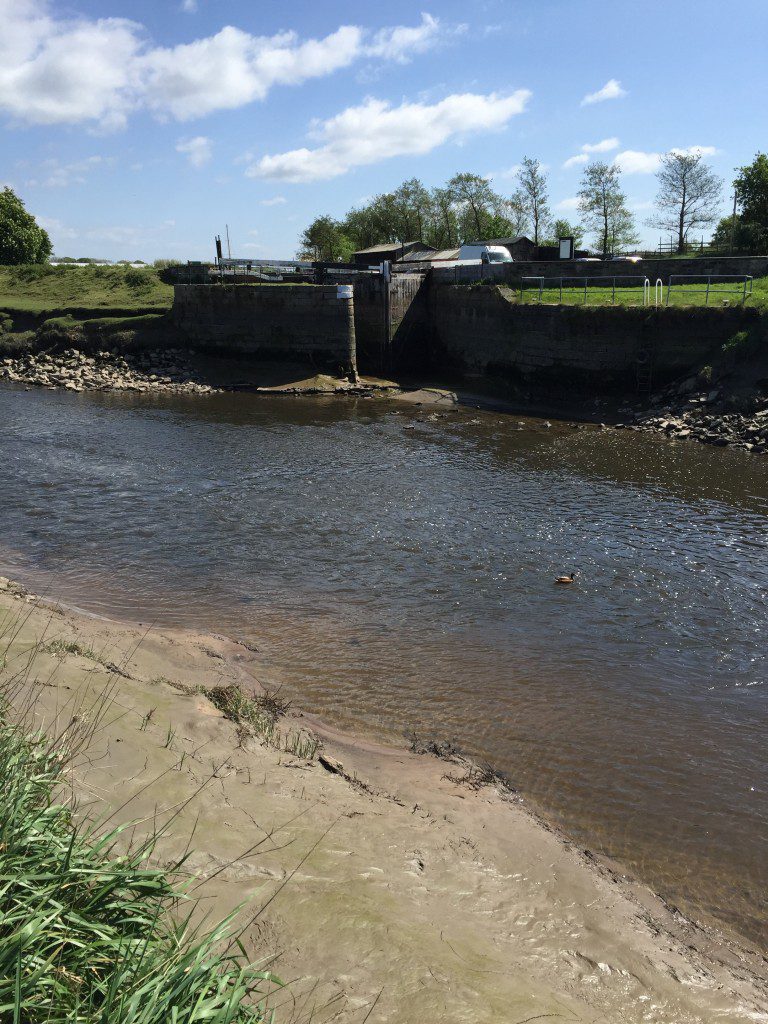 The end of the Rufford Branch of the Leeds Liverpool Canal – the lock allows access into the River Douglas and then beyond to Preston or the Irish Sea.

Continue along the embankment, which before long diverts away from the river and heads towards the main road – the A59 Preston to Liverpool Road.

This is not the best end of stage to be looking for overnight accommodation. However, being on the main A59 there is the option of going back into Preston by taxi or bus. The most local option is at Rufford (The Rufford Arms on the A59 about 3 miles way) or the Parr Hall Farm B&B in Eccleston, which is about 5 miles away.There are also B&B options in Longton to the north.

This relatively short stage of just under 3 miles is best combined with Stage 2 or walked on its own. Start at the Dolphin Pub, where there is ample parking on the road, and walk the complete Stage. At the finish turn left and head along the remains of the old Liverpool Road. Take the first left to Mill Hill Farm. Ignore the entrance to the farm and turn right and follow Haunders Lane back to the river. Return to the Dolphin by walking the first part of Stage 3 in reverse. The total distance is 5.5 miles.