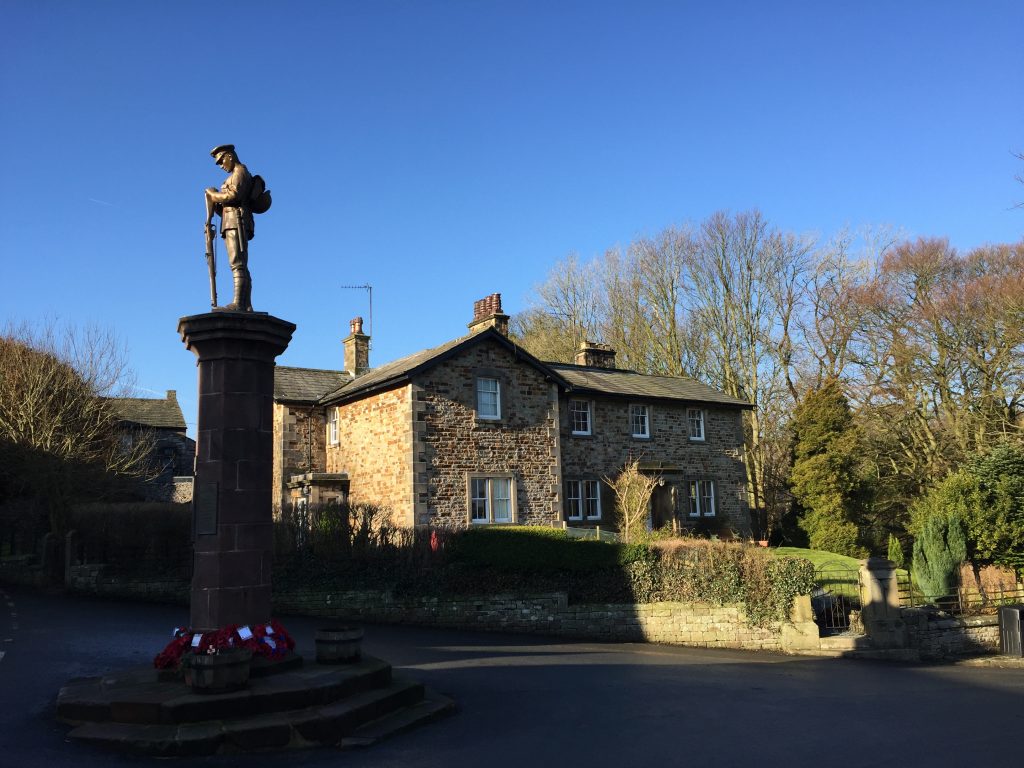 The War Memorial at Slaidburn

STAGE 23 – GRINDLETON to SLAIDBURN via NEWTON

A pleasant climb over Grindleton Fell. Look back across the Ribble valley to Pendle Hill before descending into the upper Hodder Valley. We visit the lovely village of Newton before following the Hodder upstream to the equally pretty village of Slaidburn.

A map of Stage 23 can be found below courtesy of Ordnance Survey maps. You can subscribe yourself using this link, https://osmaps.ordnancesurvey.co.uk, which will enable you to import the GPX file which can be downloaded below.

Turn right off the main Sawley Road and climb through the village on the main street. 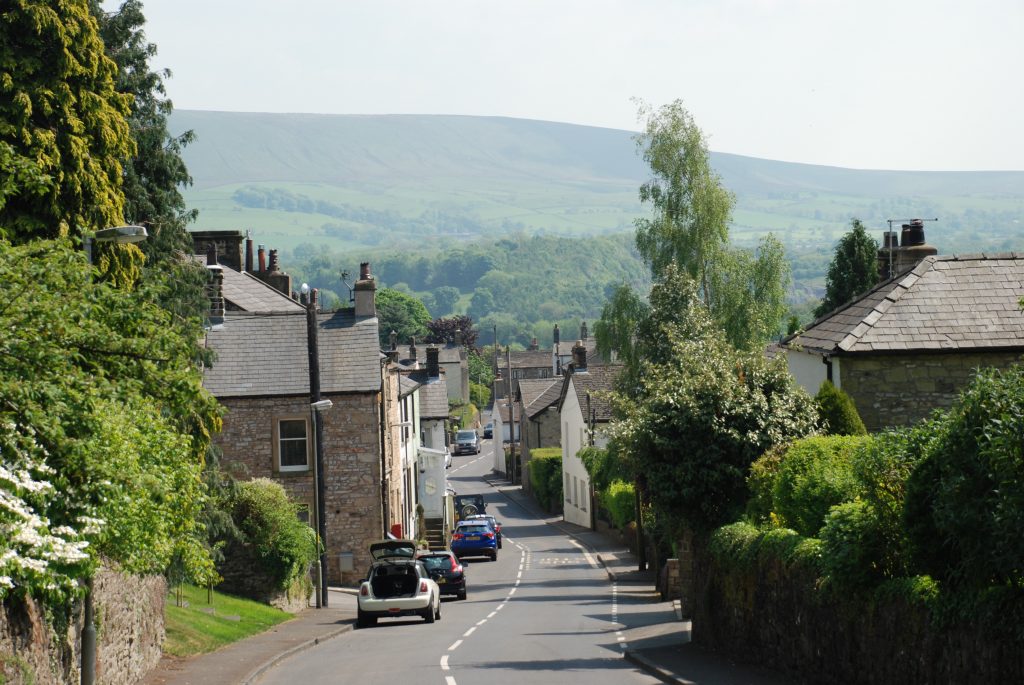 The main route follows a convoluted series of twists and turns to exit Grindleton in a way that avoids the obvious route of the main road. However, if the weather is not good and time is pressing ignore the directions below and continue on the road out of Grindleton. When the main road turns sharply right continue straight on along the forest road, which eventually will meet up with the main route described below.

As you come to the top of the village and just after the Cobbler’s Cottage on your left, take the Whitehall Road on your left out of the village. This firstly descends steeply and then climbs back up the valley on an equally steep ascent to the Whitehall. At Whitehall take the track opposite on your right, which continues to climb up the valley towards Grindleton Fell. The track takes you all the way to Cob House. Continue on in the same direction until you reach the corner of the hill on your right with a small valley straight ahead and to your right you can see the forest road in the distance. Do not cross over the stile which leads down into a valley and over the footbridge but bear north and continue along the bridleway until you reach the forest road.

Throughout this climb do make sure that you stop and look back as you gain height and can see more and more of the Ribble Valley and the views across to Pendle Hill. You will also note that the vegetation has changed again as we have climbed and is reminiscent again of our traverse of Pendle Hill. This is no coincidence as in our ascent we have been climbing back up the geological rock formations that we descend on the other side of the Ribble valley. As a result we have climbed back up onto the same Pendle Grit formation of coarse sandstones, which are impervious and therefore are badly drained and have a thin peaty soil.

When you join the forest track turn left and continue the ascent up the Fell. Initaillay the track is tarmaced and then becomes stoney. Take a deep breath and smell the pine forest although parts have been recently felled!! 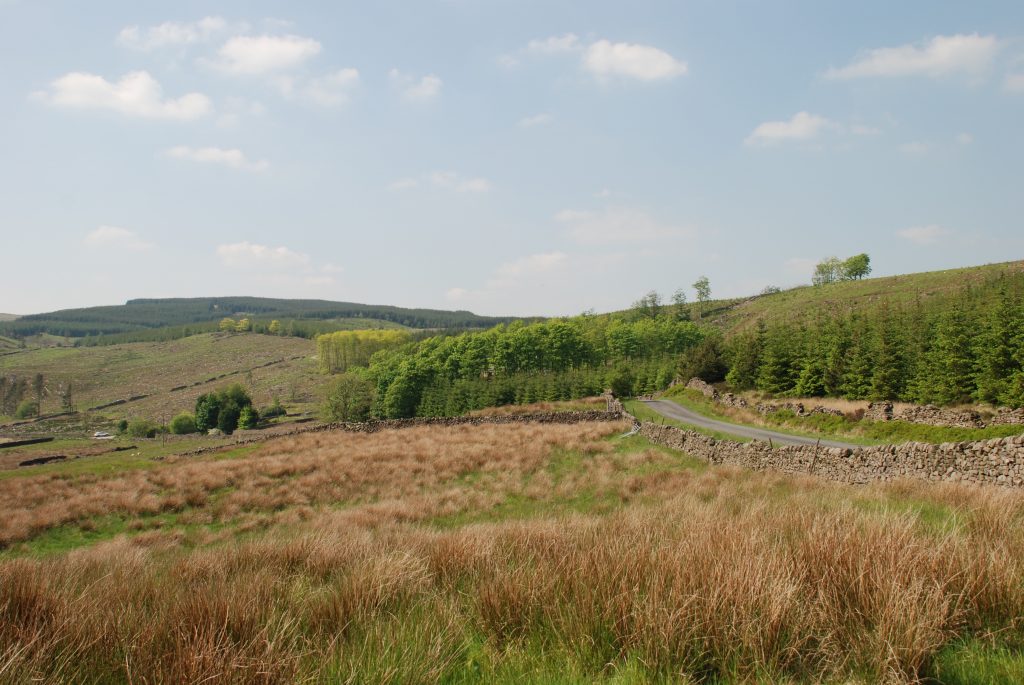 When the stoned forest track turns right into the forest continue straight on over the stile and along the track (now heavily grassed) beyond.

When the forest ends on your right cross the wall and take the lower of the two paths ahead – both actually meet again shortly. At a set of old gate posts take the path, which runs straight ahead to a ladder stile in the wall ahead. Do not take the left hand path. Once over the wall you can follow a very clear track, which runs in the same direction – west. After about 5 minutes you will see the main road but before you reach this look out for a track, which joins you from the right. Follow this which takes you back almost in the same direction as you have just come. Before long the grassy track becomes more and more distinct and finally a stone track, which heads down the other side of the hill and eventually ends at the rear of a property called Fell Side.

Turn right and pass between the two buildings and pick up the track that leads up the hill to Fell Side. We will now follow this track down the hillside past one or two other properties that the track services including one called Skelshaw. At this point the Fifty Mile Route leaves Stage 23 so please go back to that page so that you can follow the directions directly to Slaidburn. Click here to go to the Fifty Mile Route

The track winds around a little and eventually you come to Easington Brook. Cross the brook, using the bridge and then turn left and continue to follow the track, which now runs SW. After about 100 meters there is another track to your right, follow this which runs around the side of the farm known as Manor House to the main road.

Turn left and continue along the road. After passing a number of properties including Robinsons Farm on your right look out for the gate and footpath sign on your right. Enter the field and make your way diagonally across the field to the far corner. Exit the field by a stile. The path then follows a line of trees in the same direction as before and then joins a small track. Cross over the footbridge and continue in the same direction. You will then come to the river – the Upper Hodder. Follow the path along the riverbank and then enter a field. Look for the road bridge and exit the field by the stone stile to the side of the bridge.

Turn right on joining the road (B6478), cross the bridge over the river end and enter into the village of Newton. Ignore the small road on your right and continue past the Parkers Arms, or stop and have a well-earned drink in its beer garden. 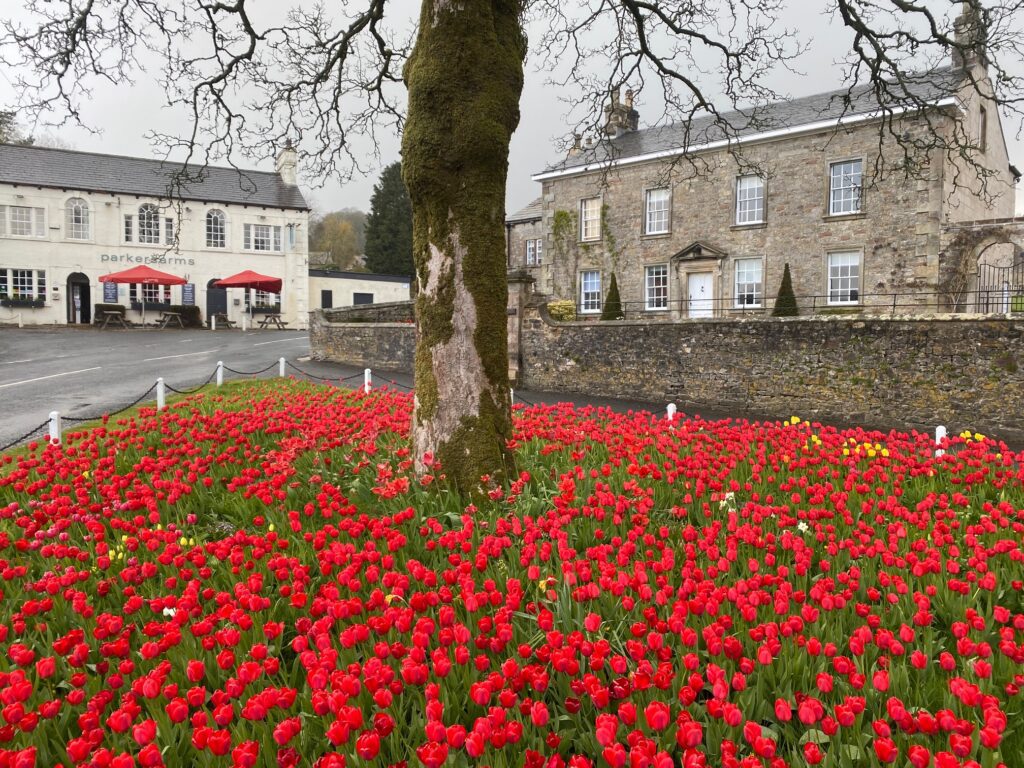 Newton Hall next to the Parkers Arms

Newton is another pretty village with over a third of properties being listed buildings. On your right is the lovely house known as Newton Hall. The village has been associated with religious dissent and radical politics, with an Independent Chapel, a Friends Meeting House dating from 1767 (just off the route) and a School attended by John Bright, an anti Corn Law orator and statesman. 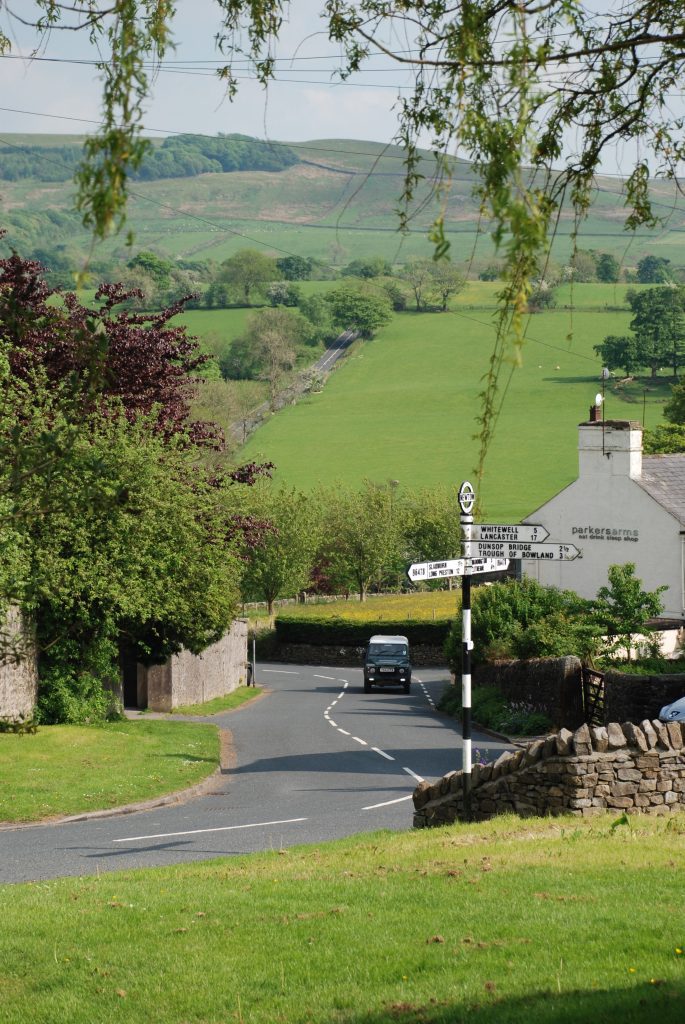 Turn right at the T-junction with an old traditional road signpost directing you to Slaidburn (1/2 of a mile) – our next destination. Note some of the lovely properties including Salisbury Hall Cottage just to the left of the signpost

Pass the old National School building of 1842 and look out for the footpath sign on your right immediately after the road crosses a small stream, in front of a black-pitched farm building. Follow the track down to the floodplain of the Upper Hodder and then turn left when you come to another path. The path initially passes through a gate and follows a short fenced passage with the field to the right. This then exits into the field. Continue to head in a NE direction, roughly following the Hodder upstream. Ahead and to the left we approach the limestone knoll of Great Dunnow. At the corner of the hill the path enters the wood and then exits again into another field. Head towards the ornate bridge, which crosses the river and serves Dunnow Hall. This can be seen to your left nestling at the foot of Great Dunnow. 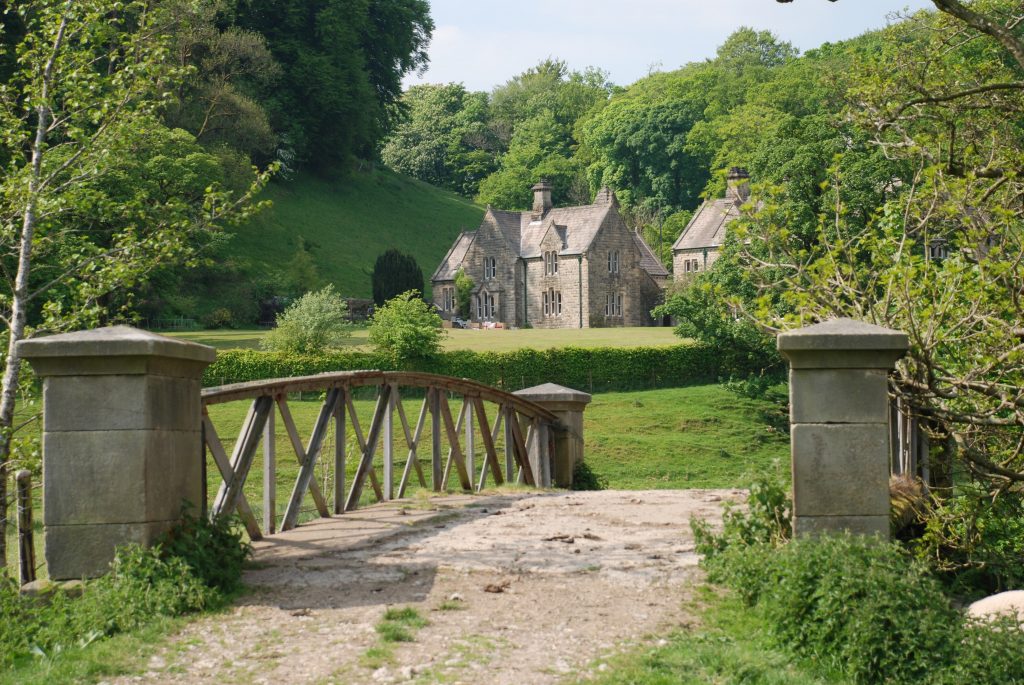 Dunnow Hall and its bridge across the Hodder

Do not cross the bridge but continue long the same side of the Hodder by following the track away from the river, initially in the direction of the Hall. Ignore the track to the Hall but continue along the track, which makes its way along the foot of the next knoll called Little Dunnow. 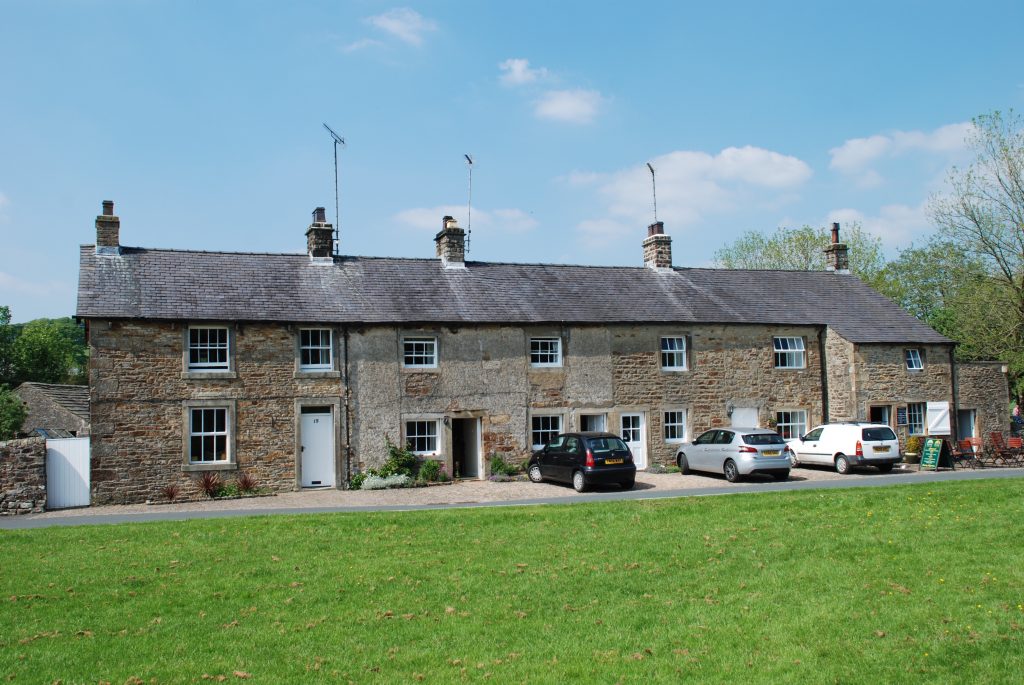 Slaidburn and its tea shop

Slaidburn is a pretty village largely unspoilt by modern development with many of the buildings dating back to the early 19th Century. Whilst slightly off the route a detour to see St Andrew’s church is recommended – located going out of the village back in the direction of Newton. It dates back to the 15th Century and has a magnificent pulpit, large ancient doors and a Jacobean chancel screen. The Hark to Bounty Inn is home to the original Courtroom of the Forest of Bowland. Above the village is the Stocks reservoir, which was created by damming the River Hodder back in the 1930s, and resulted in two villages being lost by flooding. 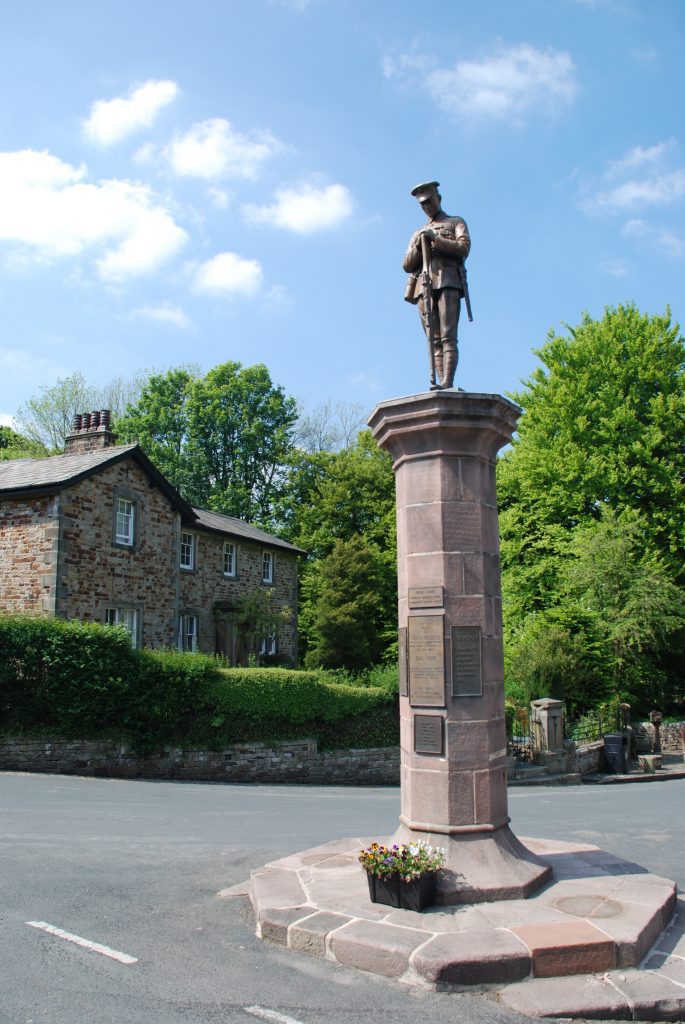 The War Memorial again – one of the best in my opinion!

Slaidburn has accommodation in the form of a Youth Hostel, which is just few meters on from the War Memorial, where the main road turns left back to Newton. Alternatively there is the pub called the Hark to Bounty, which also has accommodation. Equally you can cut this Stage short and stay at Newton, where there is B&B accommodation and the Parkers Arms. This will take two miles off this Stage and of course add 2 miles on to the next Stage.

It is easy to create a circular walk, which completes the Stage and then returns to Grindleton, but it is a long walk.  The Stage itself is 9 miles and the easiest way to return is via the roads. Exit Slaidburn on the B6478 and then take the minor road to the right at Langcliffe Cross. Follow to Lane Ends and then follow Smalden Lane back into Grindleton. The total distance is 15.5 miles. Do not be tempted by the footpaths via Harrop Hall and Harrop Lodge – the ground is wet and the paths little used.

A decent walk that takes in the first half of the Stage 23 begins in Grindleton and follows the route to the top of Bradford Fell to see views to the north across the Hodder Valley. Retrace your steps and pick up the bridleway, which becomes Moor Lane. Ideally use the footpaths and make your way to Waddington – one of the best villages missed by the Lancashire Way. From Waddington head to the River Ribble by the main road and then use the Ribble Way to return to Grindleton.