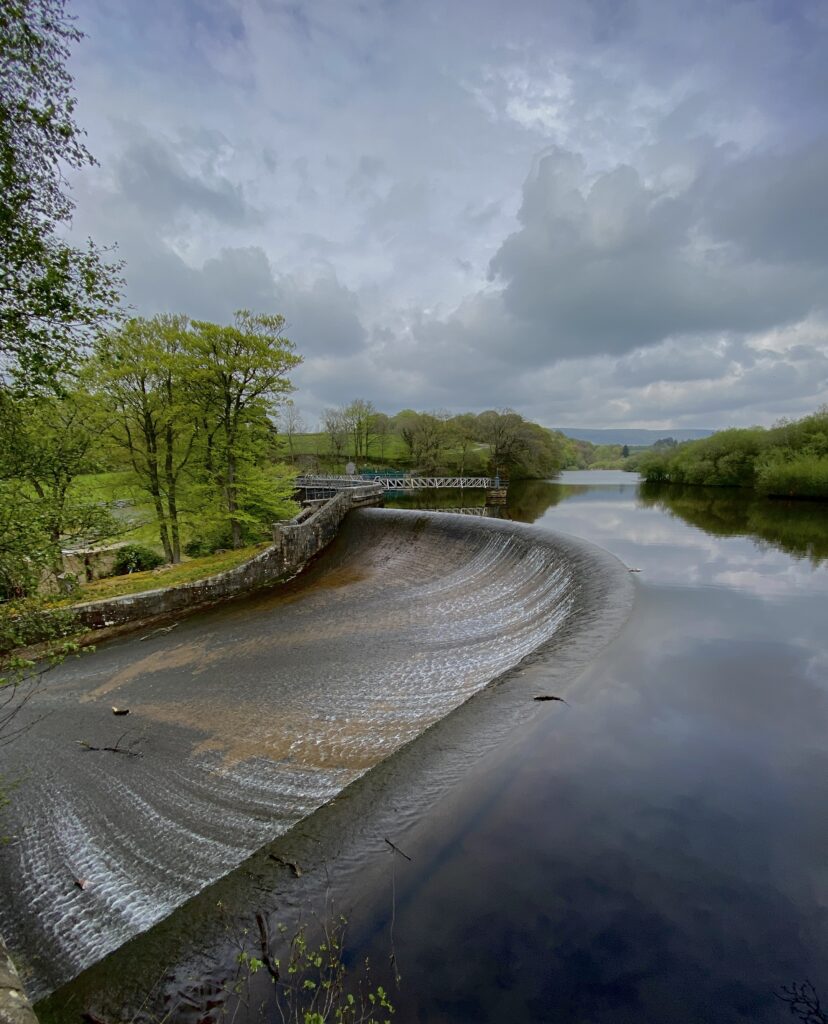 A short stage but not without interest! Good views north across the Wyre valley and beyond including the climb on our next Stage followed by a stretch along the Wyre itself, and a reservoir, and then into the pretty village of Abbeystead.

A map of Stage 32 can be found below and a GPX file of the route downloaded using the link below.

From the bridge head in a south easterly direction through the village, past Woodcock Hall and the Old Mill House and then up the hill out of the village. Look out for the sign to Dolphinholme House on your left. Come off the public road and follow the track towards the farm. Carry straight on over the cattle grid and then ignore tracks off the to the left and then the right. Carry straight on following the same track into a field, which heads up the slope in an easterly direction to the far boundary fence and then turns NE. The main track then turns right through two metal gates but we carry straight on through two adjacent gates – there is a “horse” gate that can be used.

Carry straight on following the boundary fence on your right and a line of old hawthorn trees. Use the stile next to a gate to enter the next field. Carry straight on and then bend around to the right to a kissing gate next to a metal gate. Carry on to the barn just ahead. Pass the barn on the left and then pick up a line of trees and an old boundary mound on the right. Carry straight on to a stile to the right of another metal gate. Enter the next field and again head straight on keeping the farm up on the slope on your right. Head towards the top corner of the woods ahead and find the kissing gate, which gives access into the woods.

Follow the path down and through the woods back to the River Wyre. The path is reasonably distinct although in parts blocked by trees but should be easy enough to follow. When the path reaches the bottom of the valley it heads up stream for a short distance and then ends at a large footbridge across the river.

We will now continue to follow the Wyre Way eastwards on the northern bank of the river. Initially keep on the ridge passing a stone way marker with a carving of a duck. The path then heads down towards the riverbank where there is an old stone with a carving of a fish. Carry straight on following a number of marker posts which end up on a track and then a concrete track. Head towards the stone building on the left .

Look out for the metal plaque on a boulder commemorating the deaths of several local people from an explosion at this location in the 1980s. 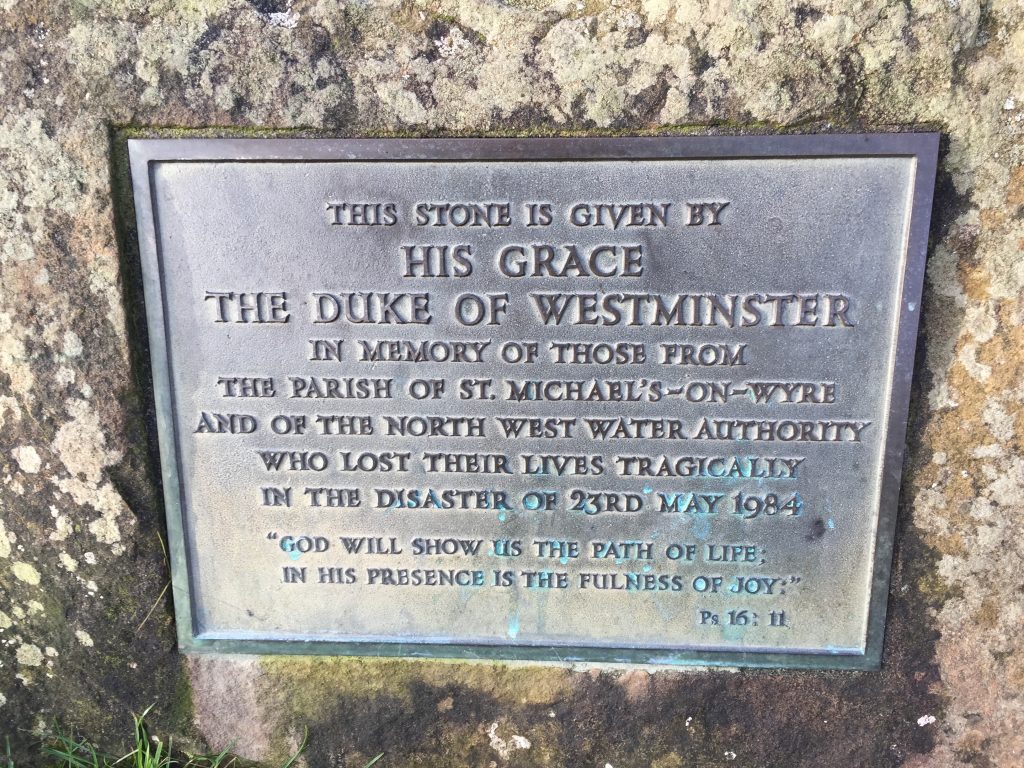 This was a particularly tragic event killing 16 people in total many of which were innocent visitors. On the evening of 23rd May 1984, the NW Water Authority held a public presentation of the operations of this valve house, which was part of a scheme to pump water from the River Lune to the Wyre, from where the water would augment water supplies for South Lancashire. The occupants of St Michael’s on Wyre, some 10 miles down stream, had felt that this was a contributory factor to increased levels of flooding in that area and the PR presentation that night was in part to residents of that village.

The cause of the explanation was methane gas, which had seeped up from shale and coal type deposits some 1200m below ground level. These gases are the same ones that are the cause of the controversial fracking debate, which is very topical in Lancashire at the moment. The gas had built up over a period of time in the new empty pipeline and when instructions had been given to turn the water, the water effectively forced the gases into the pump house. The explosion was so forceful that it blew the roof off the value station, which was built from huge heavy concrete beams. Eight people were killed instantly and eight others from their injuries including from the collapsed roof. The dead included a mother and her 11 year old son.

Leave the valve house and carry straight on and look for the stone wall to the right with a stone stile. Use this to climb over the wall. Turn right and use the grey iron footbridge to cross back over the river. From the footbridge you will see the beautifully curved weir, which marks the end of the Abbeystead Reservoir. This was built in 1855 by Lancaster Corporation to supply mills further down the river Wyre during dry summers. There are better views from the footpath after we have crossed the river including the northern Bowland Fells, which we will be following in the next stage. 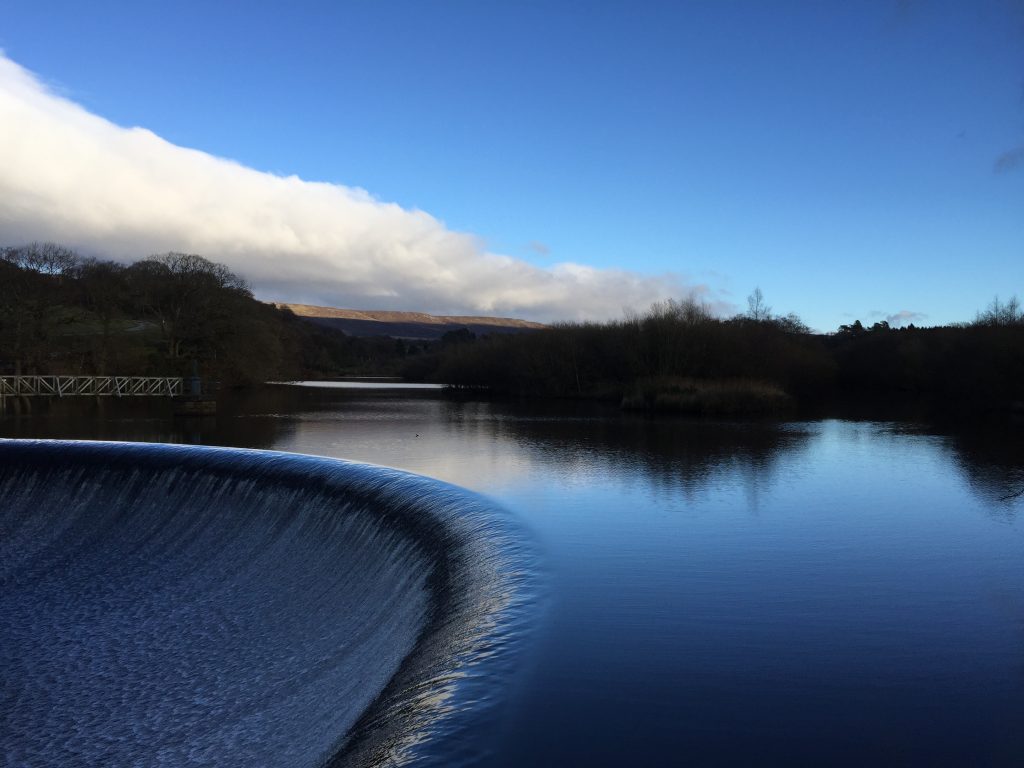 The Abbeystead reservoir and weir

Turn immediately left and follow the path through the woods for about 1km. The path is in need of maintenance although in parts there are flags, which help with the muddier parts.

The path exits the wood on to a single track road. Turn left and head to the junction of the main road through Abbeystead. Turn left, cross over the road bridge (Stoops Bridge), which crosses back over the Wyre. We will be coming back to this point shortly but the stage ends in the village itself. Pass the Estate Office and then the modern village hall on your left and then down to the centre of this small but pretty village, with its school and other buildings.

The village of Abbeystead is so called because it was the site of an abbey until the times of Henry II. The location of the abbey is unknown but could have been on the site of the school, which itself dates back to 1674 but was rebuilt in 1877. Opposite the school is Home Farm. The village is also the location of Abbeystead House and its estate. It was built in 1886 as a shooting lodge for the Earl of Sefton and is now owned by the Duke of Lancaster. Unfortunately it is very difficult to see the house, which is on the eastern side of the village.

There is no accommodation in Abbeystead itself. The nearest is Greenbank Farmhouse B&B, about 2.5 miles west on this side of Dolphinholme or there is the Fleece Inn on the other side of Dolphinholme. Alternatively a taxi could take you further afield – I suggest the Lancaster House Hotel on the A6 just north of Galgate on the way into Lancaster, which is about 7 miles away.

Complete Stage 32 into Abbeystead and return to Street via the moorland road described in the day walk on Stage 31. Then return to Dolphinholme via the last part of Stage 31. The total distance is 9.5 miles.

Alternatively on your return just before Street turn right onto Tinklers Lane and then Wagon Road which takes you directly back into Dolphinholme. This is about 1 mile shorter.