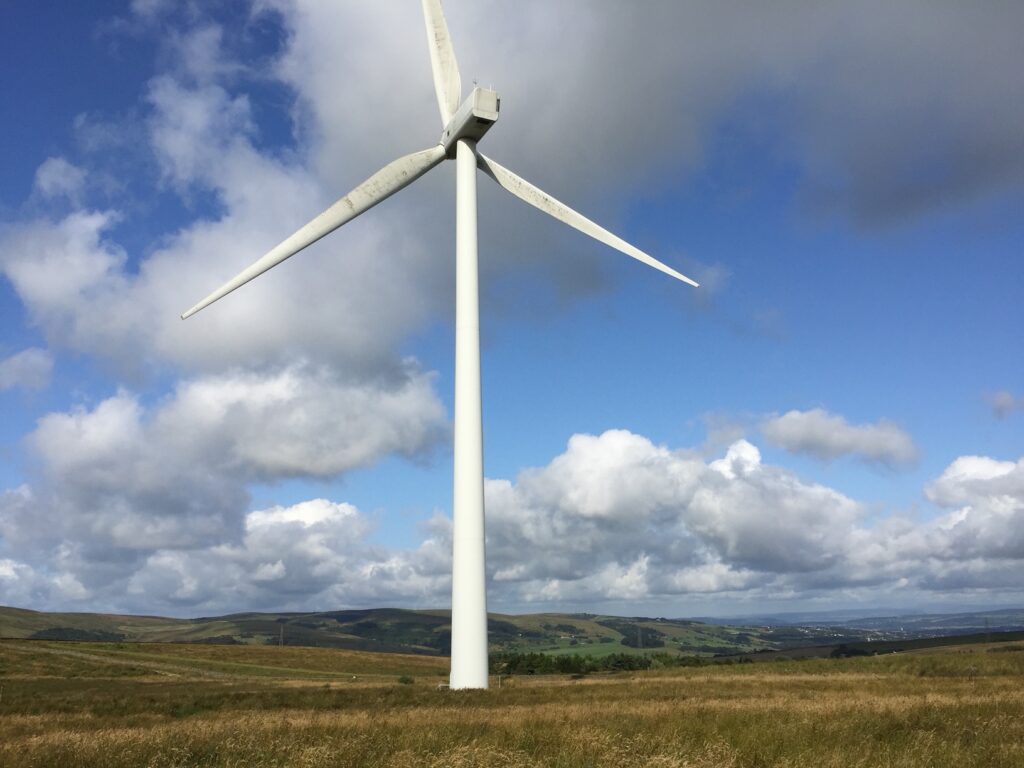 One of the many wind turbines sitting above the Cliviger gorge

STAGE 50 – HURSTWOOD TO A646 IN THE CLIVIGER GORGE NEAR PORTSMOUTH

This Stage has a lot to offer with reservoirs, the history of the “hushings” and then good moorland country with spectacular wind turbines followed by the Cliviger Gorge – a glacial meltwater channel.

Map of Stage 48 – Unfortunately OS maps of the Eastern Loop are not provided. However, if you e mail lancashireway@aol.com and a full GPX file of the Eastern Loop will be sent to you and this can be down loaded on to OS maps at www.osmaps.ordnancesurvey.co.uk. Alternatively you can download the GPX file directly and view an interactive map by following this link – Click here for Interactive Eastern Loop Map and GPX

Cross over the dam wall and then turn right and continue along the track until you come to a junction with another path on your right, which is the continuation of the Burnley Way, which took an alternative route here. Ignore this and bear left carrying on our track. We are now following a stream called Shedden Clough and are walking through a landscape called “limestone hushings” which is similar to that which we could see on the eastern slope of Hurstwood Reservoir.

The moorland in which Shedden Clough is located was covered by an ice-sheet between about 27,000 and 18,000 years ago. The ice brought rounded cobbles of sandstone from east Lancashire and limestone from the Yorkshire Dales, which were deposited in a thick layer of boulder clay, now called till, across the landscape as the ice melted about 10,000 years ago. A considerable thickness of till can be seen around Shedden Clough. A labour-intensive process called hushing was used to extract limestone from the till. A dam was built at the top of a slope to collect water in a pond or reservoir. In the dam was a gap surrounded by large flat stones and sealed with wooden planks. The ground below the dam was broken up with picks and shovels. The planks were removed and water ‘whooshed’ down the hillside, washing the fine material from the till, leaving the boulders behind. Some of the hushings are so steep that it seems likely that a series of dams at different levels was used sequentially. Streams and goits provided an abundant supply of water. The boulders were sorted by hand, sandstone piled up in waste heaps and limestone taken to the limekilns. See the following link for further details of the area. You can come off the main track on your right to investigate the hushings further.

Continue along the track through the hushings to a footbridge. Shortly after this you need to bear left, where the Burnley Way diverges from the PBW. It is not very distinct. If you miss it you will come to a main road rather than a car park. If this is the case turn left and follow the road to the car park, which is about 250m away. 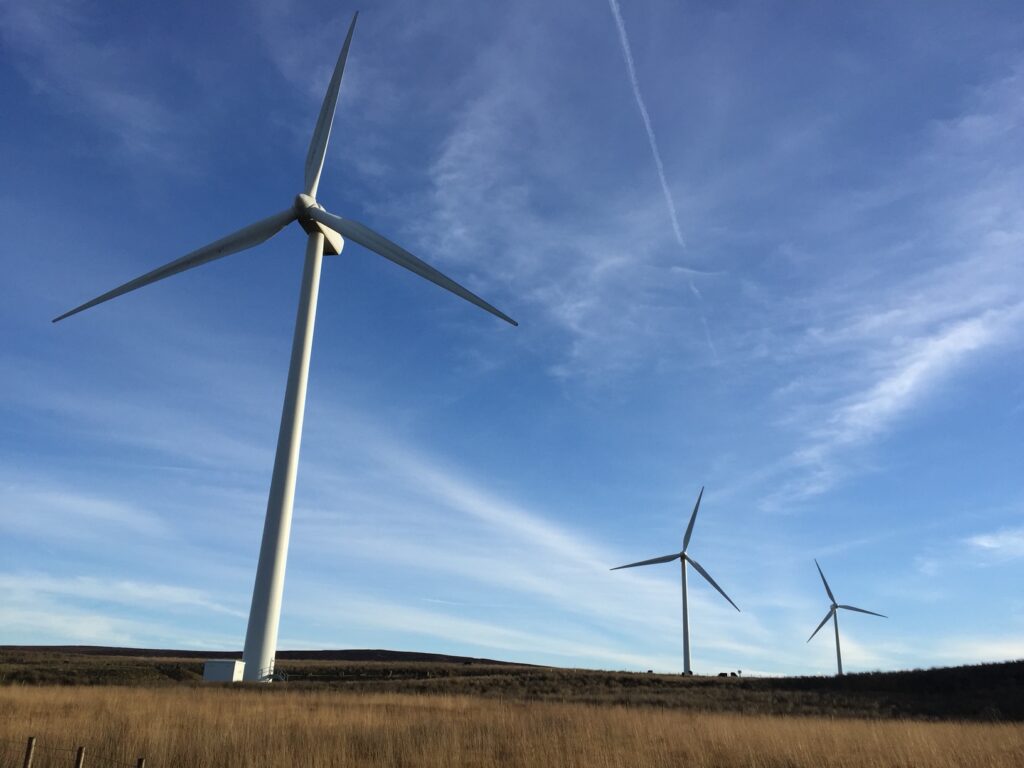 The wind turbines at Coal Clough Wind Farm, which we walk through

Exit the stile gate onto the car park on the Causeway. Exit the car park and cross the main road. Use the access road to Coal Clough Wind Farm and enter the site via a stile gate.  Follow the track and bear right on the main track to the wind farm buildings and then take a grassy track to the left of the buildings and head to a wall at the back of the wind farm. Turn left and follow the wall to a gate. Go through the gate and turn left and continue to follow the wall in a SE direction. 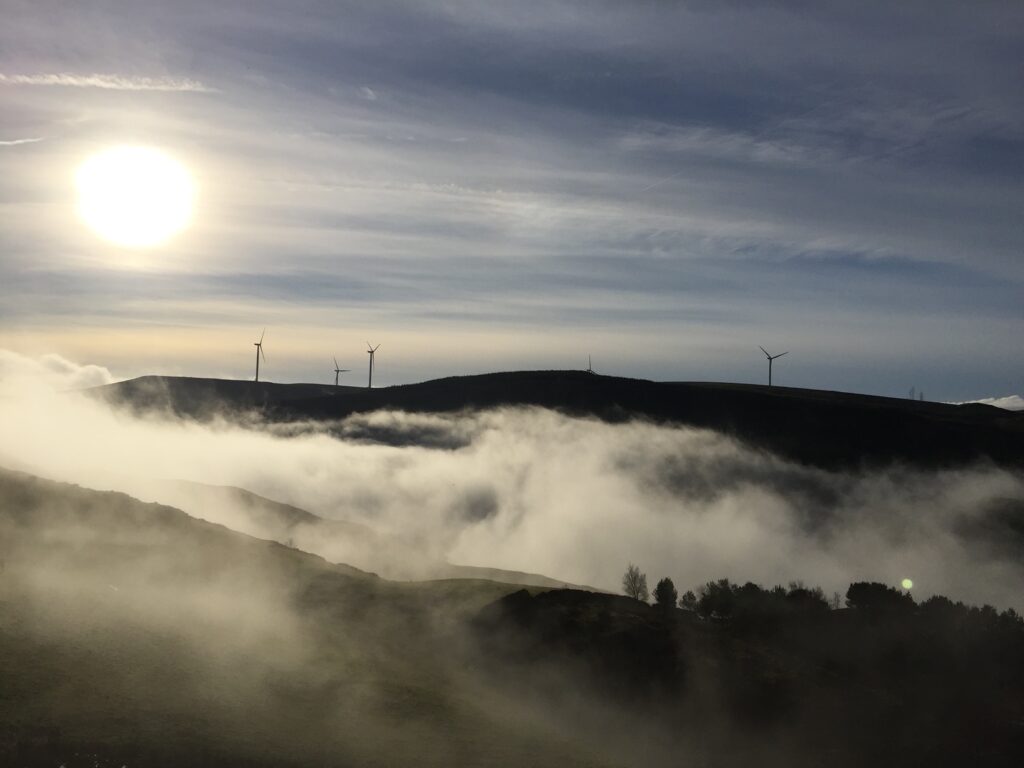 A cloud inversion in the Cliviger Gorge

Continue straight on after a large wooden gate and then continue straight on to two adjacent large wooden gates and go through right hand gate. After the next large wooden gate bear left down to a track by a wall and head for a gate in the bottom corner of the field. Just before the gate turn right and follow a track down the valley. At first do not head for the disused buildings but bear right and follow the track along the side of the hill in a westerly direction. Go through one gate and continue downhill until you reach a dip. At this point turn sharp left (do not continue along the original track uphill) and head through two wooden posts on to a track. At the bottom of the slope use the gate to exit onto a track which services several properties. Turn sharp right and continue downhill. The track then bends to the left around a fishing lake and then turns right over the railway. Exit the car park just beyond the railway onto the main road – A646. 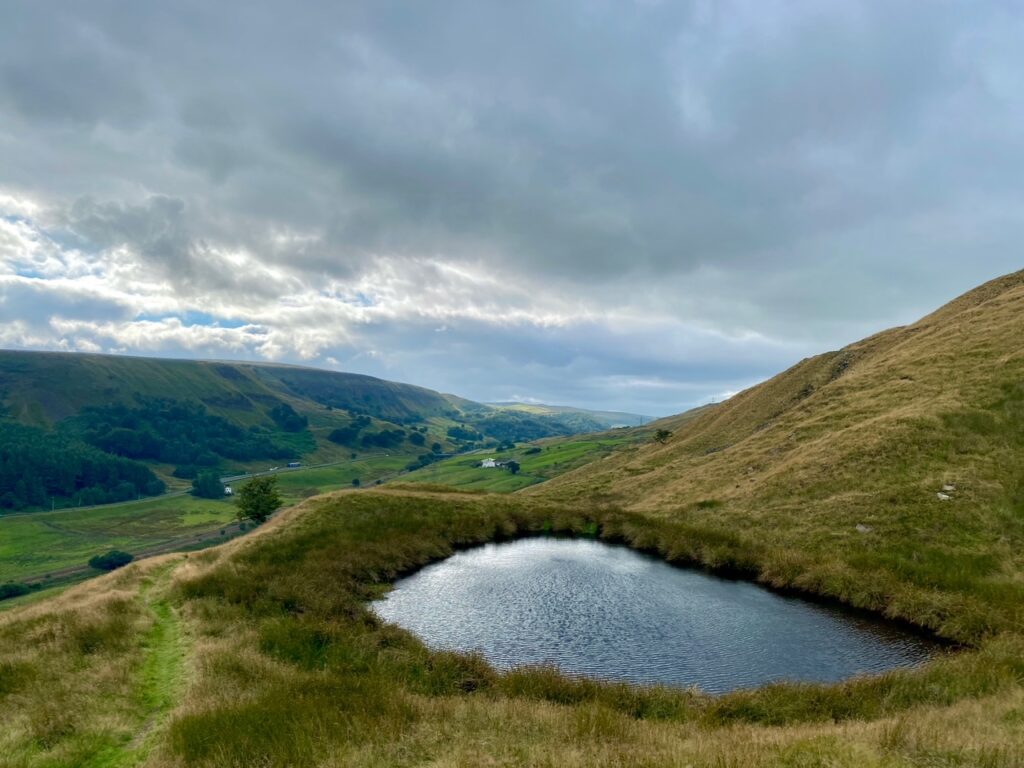 The descent into the Cliviger Gorge

The Cliviger Gorge is thought to have been created by glacial meltwater escaping from the Ribble Valley, which was occupied by a thick glacier and upon the retreat of the glaciers fast flowing rivers and possibly lakes. The gorge is the centre of the watershed of the British Isles. There are two river Calders in the valley. The one to the north heads into the Irish Sea via the Ribble and the one to the south to the North Sea via the River Aire, which it joins at Castleford. The valley is characterised by huge landslips caused by the steep sides created by the meltwater. A very comprehensive history can be found here.

There is a good bus service on the A646 connecting Todmorden and Burnley – service 591 and 592. This allows you to connect with both Laneshaw Bridge and Edenfield/Whitworth if you are walking the Loop in sections. You can also access accommodation in Burnley.