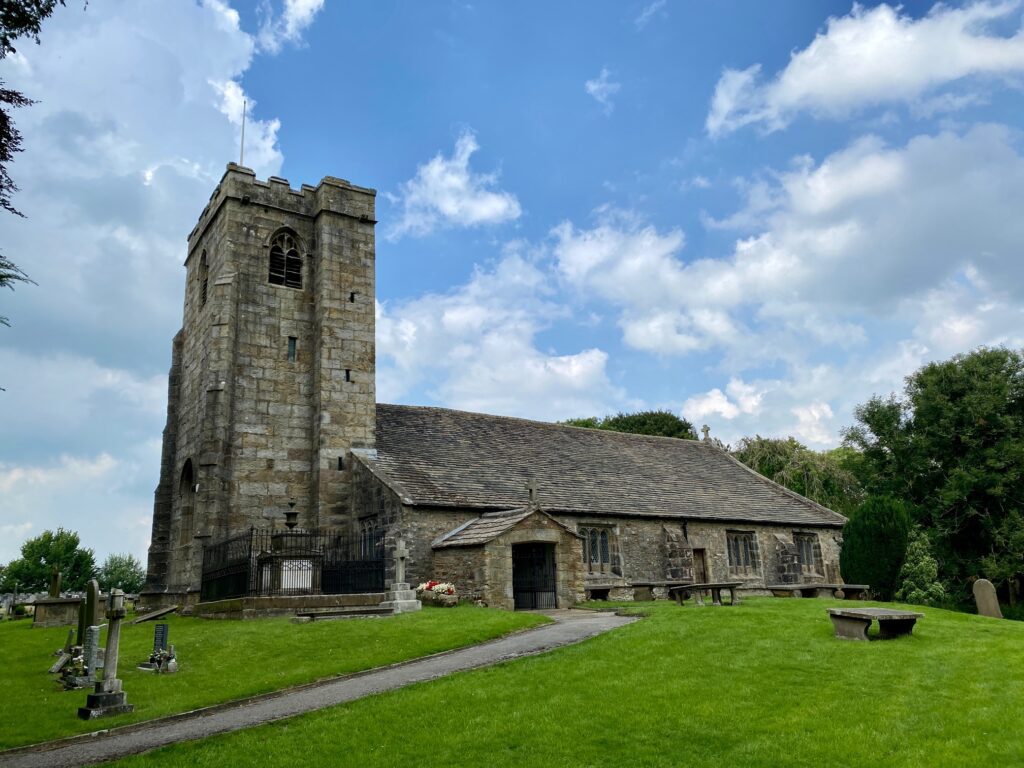 A modest but short stage where we make our way to the highest point on the Leeds Liverpool canal at Greenberfield, and then it is largely fields to the village of Earby. There is a brief departure into Yorkshire near Thornton-in-Craven and the landscape is dominated by glacial deposits in the shape of small round hills called Drumlins.

Map of Stage 45 – Unfortunately OS maps of the Eastern Loop are not provided. However, if you e mail lancashireway@aol.com and a full GPX file of the Eastern Loop will be sent to you and this can be down loaded on to OS maps at www.osmaps.ordnancesurvey.co.uk. As an alternative you can view the interactive Map of the Stage below and/or download the GPX file for this Stage only by following the instructions below.

The top lock at Greenberfield

North from the “top lock” the canal descends down into Yorkshire which is a little further on.

The large square tower that dominates the church was built in the reign of Henry VIII in 1524. The date can be seen in Roman numerals.  There are six bells with three dating back to 1723..

Carry straight on in the same direction as at the end of the last Stage until you come to the main road. Turn left and follow the road, through a cross roads (bus stops south to Colne and Burnley) and onto a mini roundabout by the Gisburn Road Primary School. Turn right and follow the Skipton Road for about half a kilometre to the Leeds Liverpool canal.

To the left before we join the canal is the first of two large Rolls Royce factories in Barnoldswick. Silentnight is another large manufacturer based in the town. Rolls Royce took over the site from Rover in April 1943, and with it the development of the jet engine. The first jet engine designed and built at the site was the B23 (later named the Welland) and was delivered to power the Meteor in July 1944. This was the first RAF jet fighter and the only Allied jet to see operational service in World War 2. The site has now become a facility manufacturing key jet engine components and has produced such engines as the RB211. RB stands for Rolls Barnoldswick.

Turn left off the road on to the canal towpath and follow the canal north for about a 1km. We then reach the Greenberfield Top Lock No 44, which is the highest point on the Leeds Liverpool canal. The Top Lock café can be found here for refreshments. Prior to this the canal has been climbing to the north but from here on in the locks start to descend down into Yorkshire, which is just a little further on. In fact we will just trespass across the border for about 10 minutes shortly. 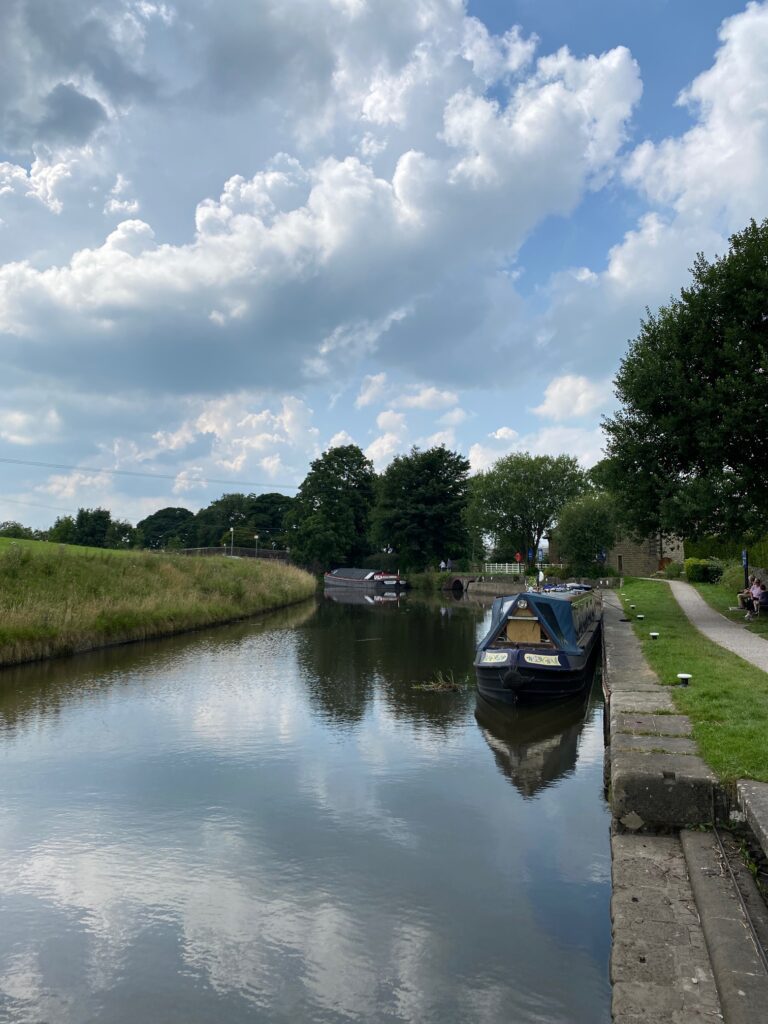 The summit of the Leeds Liverpool canal at Greenberfield

LEAVE the PENDLE WAY and come off the towpath just after lock 44 and before Greenberfield Bridge no 157. Turn right and follow the road over the canal to main road – B6252. Use the cycle route on the left just before the main road to avoid some of the busy main road. Pass the car park on your left.

We will JOIN the PENDLE WAY just before the factory entrance – part of Rolls Royce. This is the second of two factories in the town. Cross the road and take the footpath to the left of Gill Hall opposite the factory entrance. Pass the Hall and continue on to the Church of St Mary le Ghyll.

The church is Grade 1 listed and dates originally from 1160, when monks from Fountains Abbey built a church. Little remains from that period although if you go to the front door of the church there is an old stone coffin, which may date from this period together the font. The large square tower that dominates the church was built in the reign of Henry VIII in 1524. The date can be seen in Roman numerals. Inside the Three Decker Pulpit, some oak pews and the Altar Table are all Jacobean. There are six bells with three dating back to 1723.

Enter the Church yard, follow the path and then turn left towards the front of the church and exit at the main entrance on to the road.

Opposite is a small stone building with white wooded doors. Go around the right hand side of this and head towards the ornate metal gates of the adjoining cemetery. Do not enter the cemetery but turn left again at the gate and pick up the footpath that then follows the boundary wall of the churchyard. Descend to a small stream (the boundary between Lancashire and Yorkshire), cross the footbridge and enter the golf course. Cross the golf course maintaining the same direction. Exit the golf course by a small metal gate and continue in a similar direction bearing slightly left around a small hill to your right and then head back down to the main Skipton Road. Take a look north from here to see a great Drumlin landscape. These small rounded hills were deposited beneath glaciers.

Cross a stile into a wooded area, turn right and follow the path down to the grass verge by the side of the road. We are now on the outskirts of Thornton in Craven, where you can join the Pennine Way about 0.5km further up the road. Just before the entrance drive into Thornton Hall Farm/Country Park and opposite St Mary’s Church, turn right and use the stile to enter the field. The next section is not that obvious as the attraction that is Thornton Hall seems to have been built over and around the footpath, so that sometimes you feel that you have lost the path. However, just follow the same bearing, which is almost south.

From the stile by the road cross through the field and then exit and cross a drive into another field with the main buildings to your right. Bear right diagonally across the field and then enter the car park adjacent to the building and its main entrance. You are now back in Lancashire! Continue across the car park in the same direction and find the exit in the top right hand corner of the car park, which is marked by Pendle Way marker posts. Cross into the field . Carry straight on down the slope towards a bend in the road over the fence. We will not cross over onto the road but when you reach a gravel track bear right and find a stile to cross over a fence into the next field. Carry straight on over a footbridge. Bear slightly right and continue up the slope and use a stile gate to enter the grounds of Grange Farm. At this point bear left, cross the drive and follow the path in the same direction to another stile gate. Then bear left down the field to a new metal stile gate and then on to a wooden stile gate onto the drive by All Saints Parish Church. Join the drive to the church and follow around to the main road – A56.