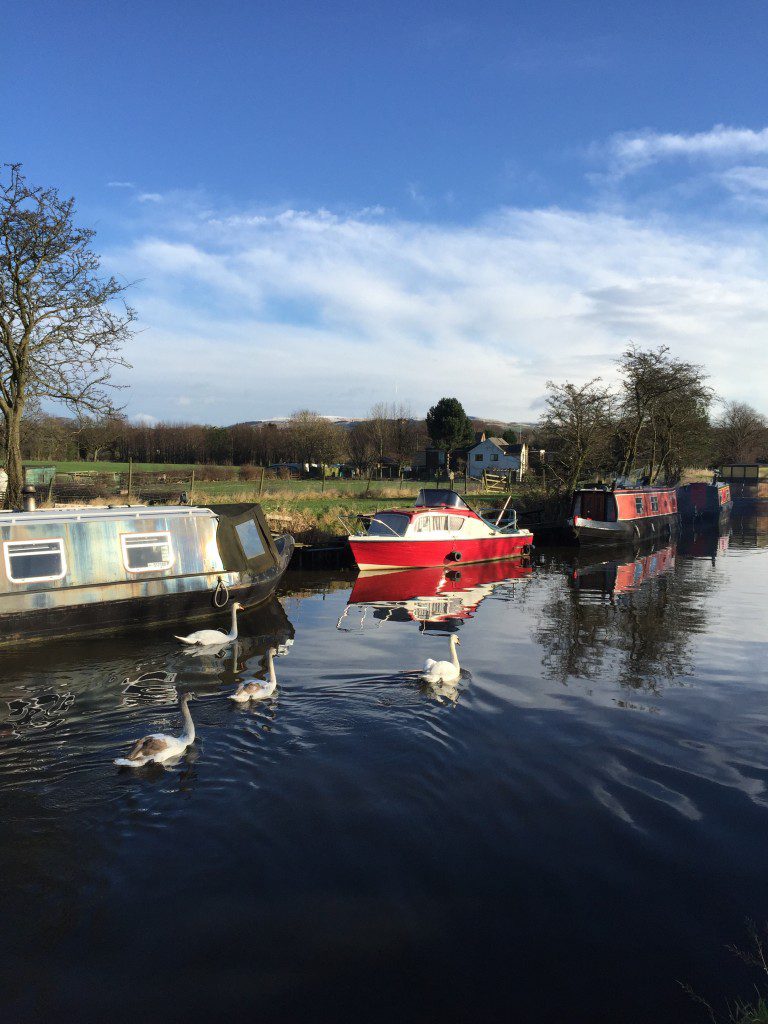 Swans on the Leeds Liverpool Canal north of Adlington with Winter Hill in the background.

A final wander through the planted woodlands of Haigh Hall, before joining up with our old friend the Leeds Liverpool canal. The first section meanders through pleasant rolling countryside, with the views of the West Pennine Moors, which are drawing ever closer. Then Adlington and ending at my favourite ice cream shop in Lancashire, on the A6, just to the south of Chorley.

Map of Stage 10 can be found below courtesy of Ordnance Survey maps. You can subscribe yourself using this link, https://osmaps.ordnancesurvey.co.uk, which will enable you to import the GPX file which can be downloaded below.

From the SE side of the Hall, follow the drive away from the house in a SE direction. Keep on the tarmaced drive for about a kilometre as it meanders through the woods, which were planted by locals during the cotton famines, whilst little other work was available. When you cross the canal bridge turn right and descend to the canal bank, and continue along the tow path in a NW direction. Just after joining the canal you will come across a small basin, which I assume was used to load cargo and in particular coal from the estate onto barges. Apart from its land, the estate had a number of coal mines and the Earl was a key supporter of the canal, and I suspect had an influence in its route, particularly as his permission would have been required for it to push straight through the middle of the estate.

Continue along the canal towpath to Bridge No 63 at Red Rock, so named after the Ravenhead standstone rock within the carboniferous coal measures which includes iron , and therefore its red colour. The pub, now closed, is the old Crawford Arms named after Lord Crawford of Haigh Hall.

Leave the canal at Bridge 63, as we take a quick detour to briefly pick up the line of the old Lancashire Union Railway opened in 1869, before rejoining the canal towpath again. Turn left and follow the main road down the hill for about 100 metres. Cross the road and enter the car park on the right side of the road. This is the old goods yard of the railway. Continue to the end of the car park and then pick up the lane and then the track which follows the line of the old railway. On your right you will see a stone house, which stands on the site of the old  Red Rock railway station and incorporates the original stone of the station.  For more information see http://www.disused-stations.org.uk/r/red_rock/. After a few hundred metres you will come to a green latticed metal bridge, which carries the canal over the railway and must have been added when the railway was built, some 70 years after the canal was built. Use the steps to the right to rejoin the canal bank.

We will now follow the canal bank to Adlington some two mile north. There were two alternatives to following the canal bank but both are inferior. The first is to continue along the old railway to the east of the canal, but this is largely tree and hedge lined with numerous cuttings, which severely impair the views. The other alternative was to cut through Arley Woods and then up to Crawshaw Hall before following the valley of the River Douglas. The paths, however, can be very muddy and again the views are not as good. So my favourite canal wins again! 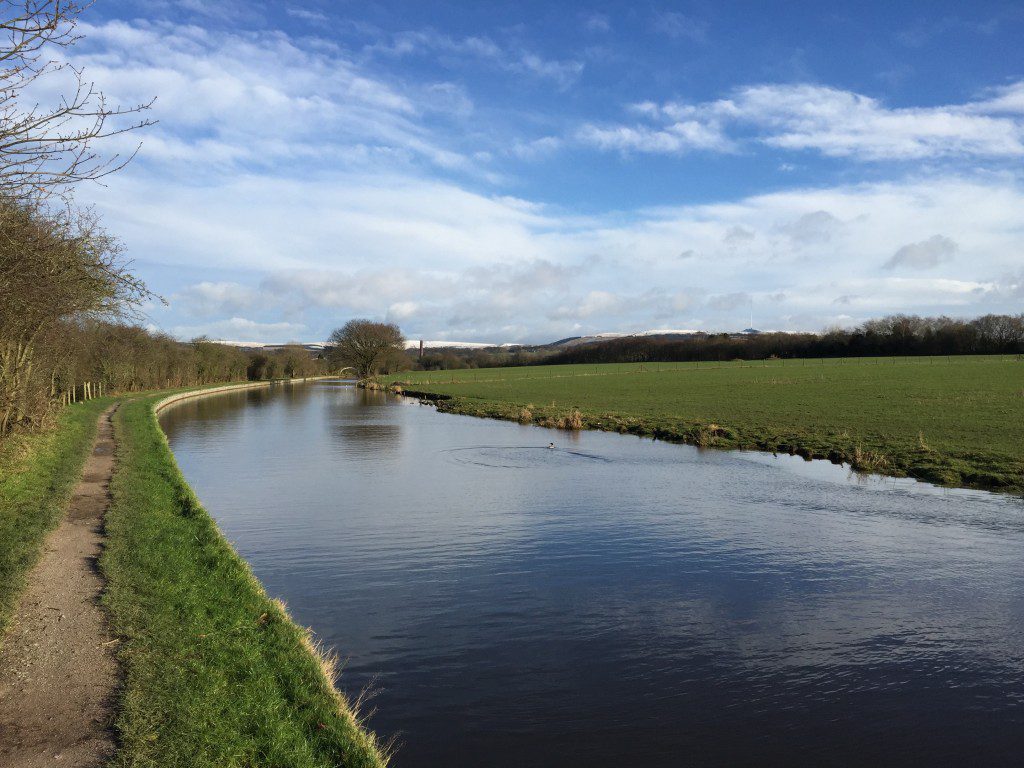 The Leeds Liverpool canal approaching Adlington – the canal meanders following the contours to avoid the building of locks. Winter Hill still beckons, with a dusting of snow!

Whilst walking along the canal bank look out for the following: 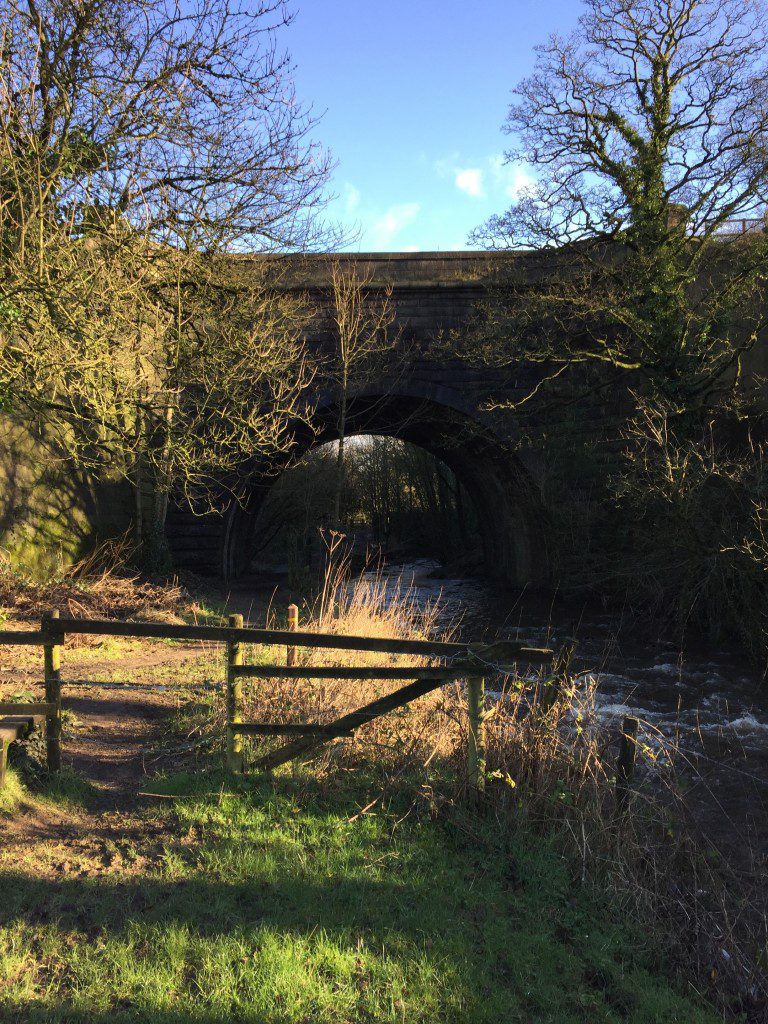 Another dilemma for the route! In fact there were many dilemma’s on the next stages of the Way. How do we best travers the valley across to the West Pennines, which only has a limited number of points at which you can cross the M61. And secondly how do I best show off the Rivington/Anglezarke area, which is probably the highlight of the Southern Loop. This would have to include Rivington and Winter Hill (the highest point in Southern Lancashire) and in my view White Coppice, one of my favourite places in the whole of the county. I appreciate that there are several options and would not begrudge you taking your own option dependant upon how much time you have and your physical abilities. There are four options in crossing the M61 that I have considered from South to North, which are as follows

Hopefully you will concur with my conclusion, which has taken many deliberations to reach.

So back to the Rennie’s viaduct on the Leeds Liverpool canal on the outskirts of Adlington!

Continue along the tow path until you reach Bridge 73. Note the following on this stretch of the canal

After passing under Bridge 73 you will see a signpost directing you to Frederick’s Ice Cream Parlour. Follow the lane to the A6 and the shop – the business was first established in 1896, when three brothers walked from Italy to England to seek work and a better life. In 1936, the grandfather of the current owners married into another Italian family, called the Massas, from Chorley and thus ice creams were first sold from the current site. I remember stopping off to buy their lovely icey white ice cream back in the 60’s!! See www.fredericksicecream.co.uk

END OF STAGE 10 – There is a Premier Inn just further north on the A6 (10 minutes walk) for accommodation and there are other alternatives back in Adlington and Chorley and its surrounds. Chorley has a railway station to Preston, Bolton and Manchester.

It is difficult to complete this in one short walk as the stage itself is 6.75 miles so in its simplest form by just returning in reverse the walk would be 13.5 miles long. Therefore split the walk into two. Walk to Adlington, which is just under 5 miles. Return either by Crawshaw Hall and the Worthington Lakes or Little Scotland, Toddington Lane and Copperas Lane making the days walk around 10 miles. There is a car park at Haigh Hall – charges apply.