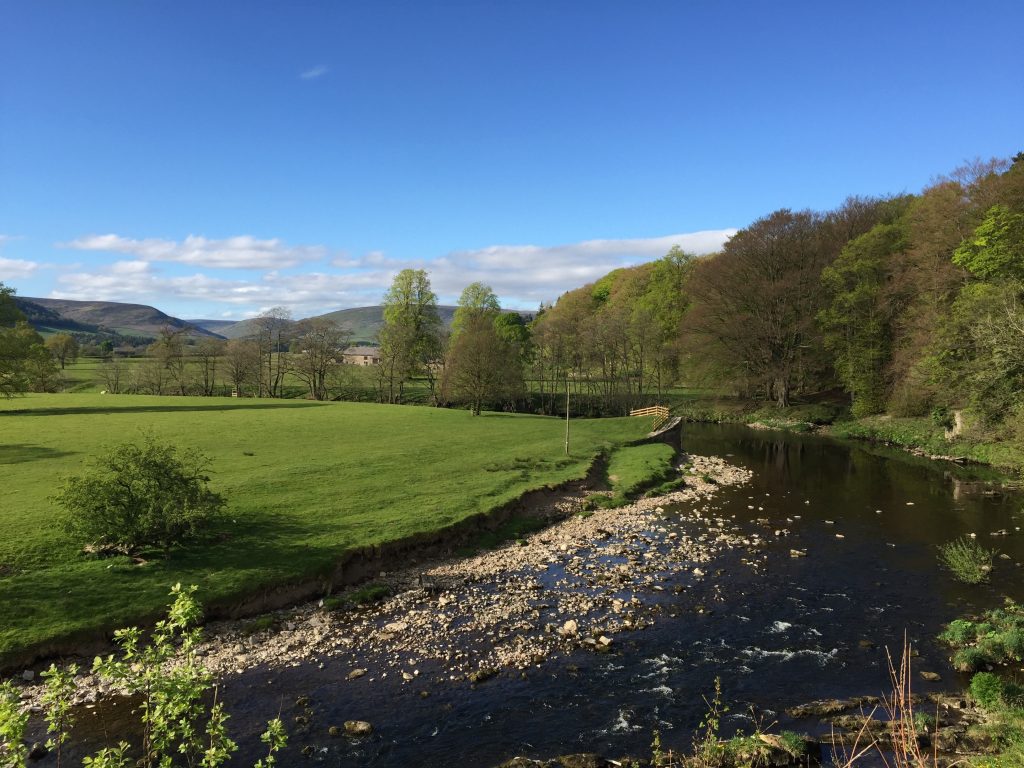 The River Hodder from the terrace at the Inn at Whitewell

Stage 18 – Begin Stage 18 from Riley Green and follow to Billinge Hill and then down to Close Farm. At this point make your way back down to Samlesbury Bottoms by following the alternative quick route on Stage 2 in reverse. At Hoghton Hall turn right and follow the road up the steep hill. At the top you will come to Long Barn Row and the Wesleyan Chapel. From here follow Stage 17 to the end.

Stage 19 – Park at the railway station at Wilsphire at the bottom of Ramsgreave. Follow Stage 19 to Whalley. Catch the train back to pick up your car experiencing the viaduct at first hand. 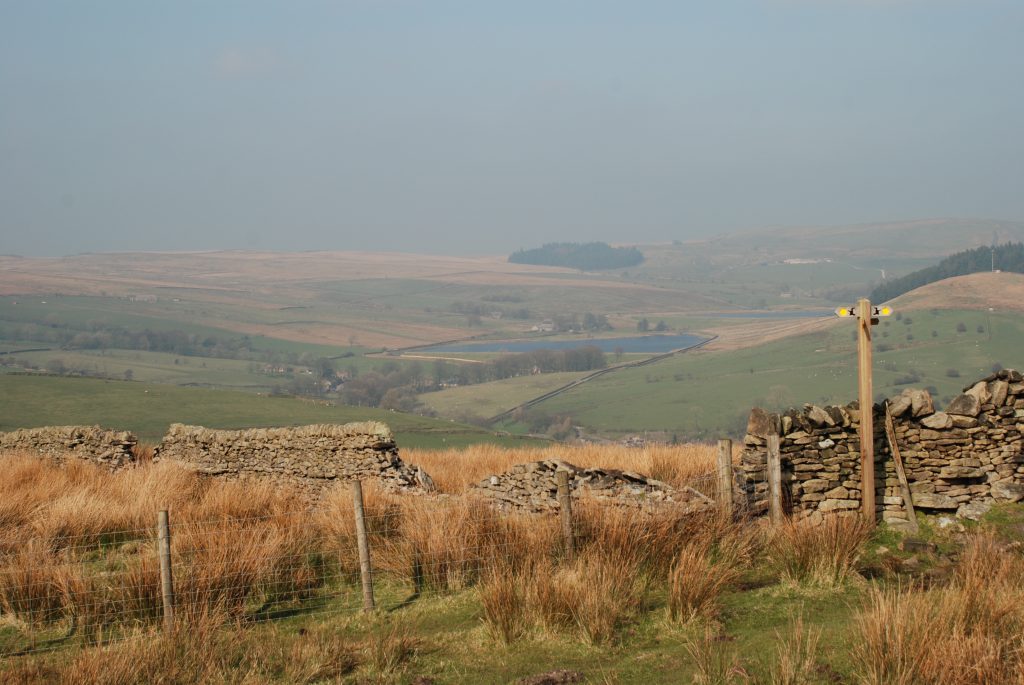 Looking across to Barley with footpath signs for the Pendle Way

Stage 22 – Complete Stage 22. From Grindleton make your way to Chatburn. Find the path that comes off the road, which returns to Downham and passes under the A59 bypass. Cross behind Worsaw Hill and Worsaw End and then return to Downham.

Stage 23 – Begin Stage 23 and follow to the top of Bradford Fell to see views to the north across the Hodder Valley. Retrace your steps and pick up the bridleway, which becomes Moor Lane. Ideally use the footpaths and make your way to Waddington – one of the best villages missed by the Lancashire Way. From Waddington head to the River Ribble by the main road and then use the Ribble Way to return to Grindleton.

Stage 23 and 24 – Begin in Newton and complete the last section of Stage 23 to Slaidburn. Then walk the whole of Stage 24 to Dunsop Bridge. From Dunsop Bridge return to Newton. To avoid as much of the main road between Dunsop Bridge and Newton there are two basic options. Keep to the north of the road using footpaths which go via Beatrix, Rough Syke Barn, Bull Lane and then the quiet country lane called Back Lane that then descends into Newton. However, there are contours on this option. Alternatively use the paths on either side of the River Hodder to the south of the road. The quickest are those on the north bank of the river, which end at Boarsden on the main road. There are options to avoid the main road but they are circuitous. Longer but preferable are the paths to the south of the river. Cross the Hodder at Thorneyholme Hall and then use the concessionary track past Knowlmere Manor and then on to Giddy Bridge and the quiet lane at Foulscales. Then head to Newton through the fields by the river.

Stage 25 – an excellent but long walk is to complete Stage 25 as far as Fiensdale Head. Then follow the Stage along the boundary fence to the summit to the NE of Fair Snape Fell. From here head east on a good new path. At the point at which it turns south and heads down the the hill known as Saddle Fell you have a choice. You can continue along the boundary fence/wall in an approximately easterly direction and then turn NE to the summit of Totridge. There is a path but it difficult to follow at times and there are numerous peat bogs to traverse. Do not be tempted to cut the corner – keep to the boundary wall. From the summit there is a steep path down the NE slope of Totridge, which meets a concessionary way. Follow this and the footpath down to Hareden Farm and the main road. You are now back at the beginning of this Stage.

Alternatively you can descend Saddle Fell to Saddle End Farm and then onto the quiet lane. Turn left and head NE along the single track road. This becomes a track and then a road again at Lickhurst Farm. There are ways to avoid the road but it is quiet and quick with good views down to the Hodder. At Burholme Bridge cross the Hodder and then use the footpaths, which take you to Thorneyholme Hall and Dunsop Bridge.

A slight detour is to take refreshments at the Inn at Whitewell – a great pub – make sure that you go outside at the back and sit on the terrace overlooking the River Hodder and with great views up the valley. The Inn can be accessed by taking any of the three paths, which pass New Laund Hill and Farm. From here take the path down to the river, where steping stones allow you to cross the river, unless the river is particularly high. There used to be a bridge further upstream but the only remains are the supports on either side of the bank. 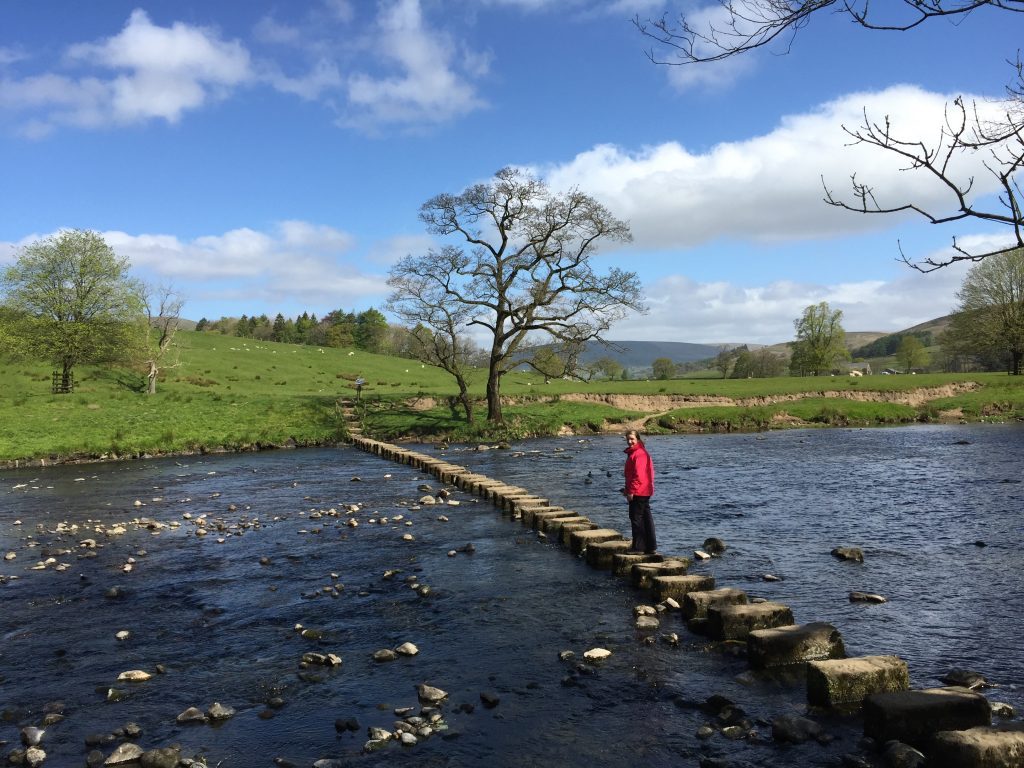 The steping stones near the Inn at Whitewell, which cross the River Hodder

Stage 26 – Park at the car park at Jeffrey Hill a couple of miles into this Stage – GR 639 402. Complete Stage 26 ending in Hurst Green. Pick up the bridleway, which runs NW initially up Dean Brook and then heads to Greengore and Crawshaw House. Go onto the main road. Turn left. The easiest way back to Jeffrey Hill is to take the track on your right, which winds its way through the forest on Longridge Fell. At the point where the track splits take a left turn. This track becomes a path at the end and exits on the summit of Longridge Fell not far from the trig point at Spire Hill. Turn left and head down to the car park retracing your first steps of the day.

Stage 27 – Complete Stage 27 and return via the alternative route that you did not take. 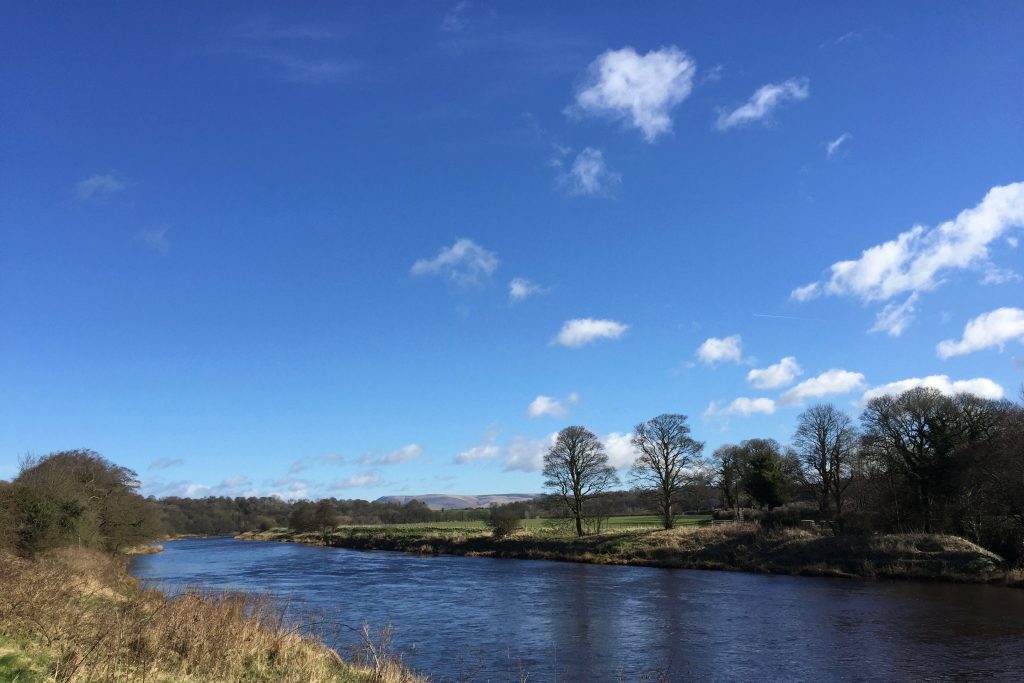 The Ribble near Ribchester with Pendle Hill in the distance

Stage 28 – Park in Preston. Take the train to Blackburn and experience parts of Stage 17 and 18 including the railway viaduct at Pleasington/Hoghton Towers. Catch the bus from Blackburn bus station to Ribchester – currently Service number 35 – see www.lancashire.gov.uk for timetables. . It takes approximately 30 minutes. Get off at the bus stop near the Black Bull in Ribchester and head down Church Street to the Roman Museum, which is the start of Stage 28. Complete Stage 28 ending in Preston. Note the Roman columns at the front entrance to the White Bull pub on Church Street.