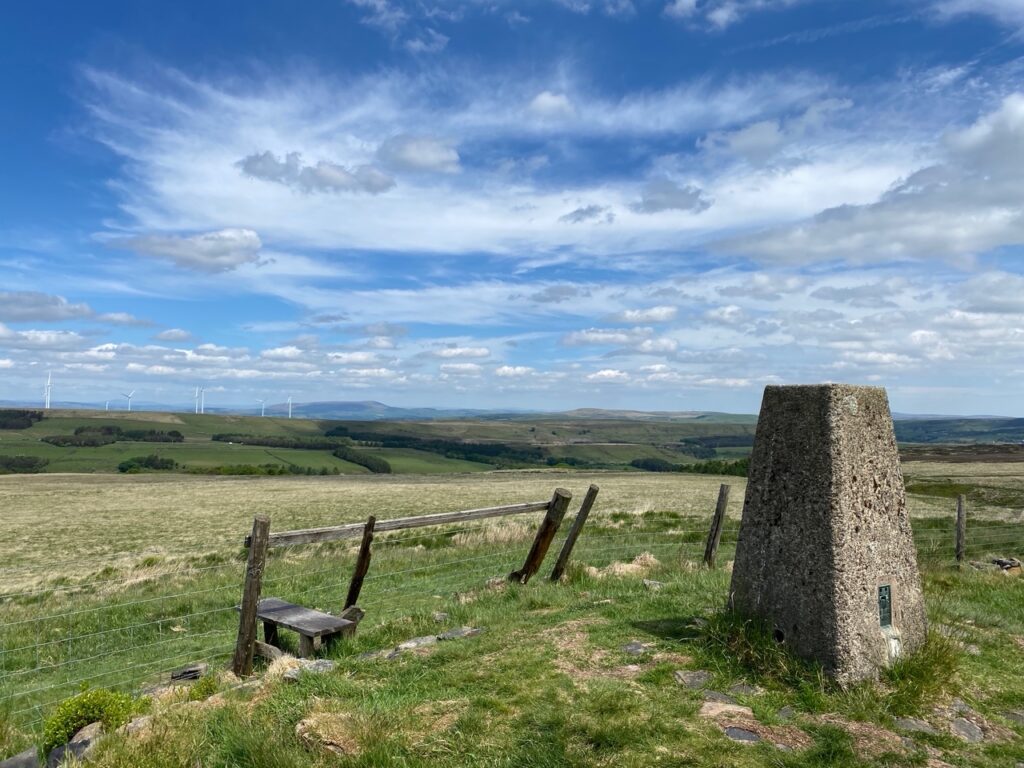 Hog Lowe Pike with Pendle Hill in the distance

A modest stage but with a good ending. Hog Lowe Pike gives good views and then there is an interesting descent down to and then around Calf Hey Reservoir in the Haslingden Grane valley.

Map of Stage 55 – Unfortunately OS maps of the Eastern Loop are not provided. However, if you e mail lancashireway@aol.com and a full GPX file of the Eastern Loop will be sent to you and this can be down loaded on to OS maps at www.osmaps.ordnancesurvey.co.uk. As an alternative you can view the interactive Map of the Stage below oand/or download the GPX file for this Stage only by following the instructions below.

Cheetham Close is only 329m high but has great views west to Winter Hill, east back to Holcome Hill on Stage 53 and south to Manchester and beyond.

The building of these Reservoirs resulted in the hamlet of Grane being abandoned. There are many remains of the properties in the valley.

From the road bridge over the railway head back down to the Wayoh. After 50m look out for the stile gate on the left. Pass through this and follow the path down the steps into the wood. At the bottom of the slope you come to another path on your right and a footbridge straight ahead – the end of the Wayoh Reservoir. Do not cross this but turn left and follow the walled stream up stream. After 75m use the footbridge to cross to the other side and then follow the path which begins to bear right and head up and away from the stream. Ignore a path to the right and carry straight on to a stile. Cross into the field then then follow the path which runs parallel to the boundary fence on your left. Look out for a stile and then cross over this and then carry straight on and then bear left to the side of a house. Use a stile and gate to cross on to the cobbled drive of the house and then bear left on to the tarmac drive that serves this and one or two other properties. Follow the drive to the road.

Turn left and after 75m turn right on to a track with footpath sign. Follow the track to a large metal gate and then onto another. Shortly after this you need to bear left and follow the stony track which starts to climb up the side of the hill called The Naze. At the top of the slope the stony track turns left into a quarry – ignore this and carry straight on. The OS maps and some footpath signs are a little confusing at times but the route is actually quite simple. Once you leave the stony track and are on top of the moor then follow the often muddy grassy track in its various forms in roughly the same direction (N to NE) for almost one mile. 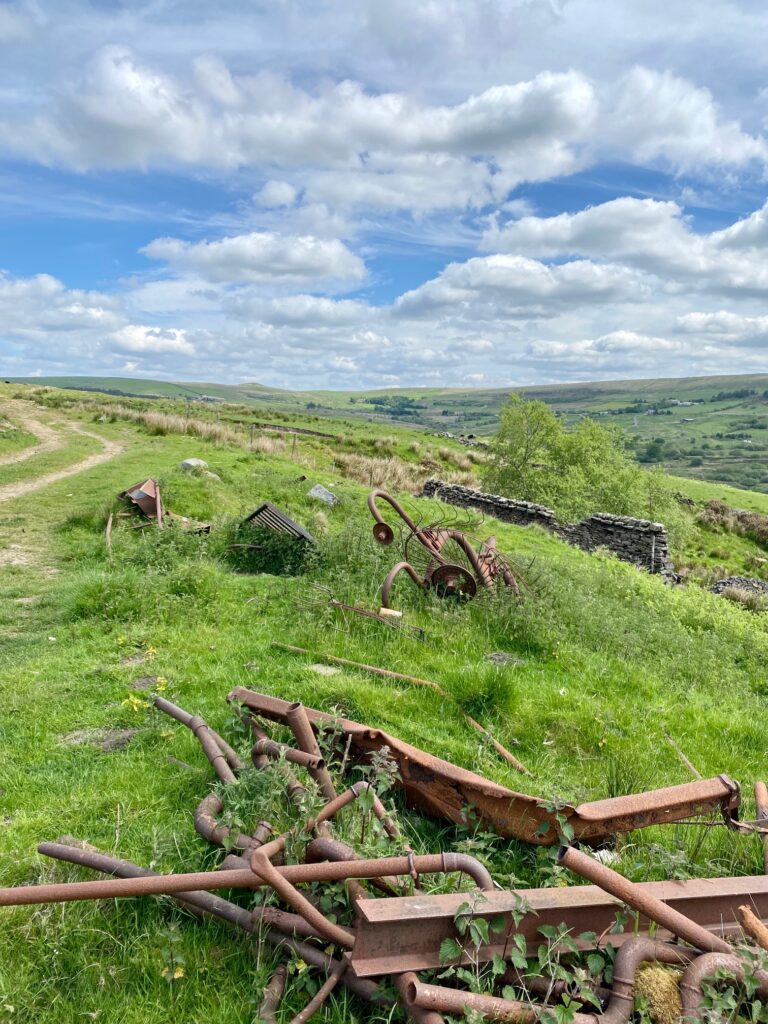 You will then come to a large metal gate with a house and a white garage to your right marked by the words Longshoot on the OS Map. Pass through the gate, still on the track, and at the top of the slope turn right and find a stile which takes you into the garden of the property i.e. immediately to the north of it. Follow the boundary around to the opposite corner of the paddock you are now in. Pass through two gates and then onto the drive that serves the house. Turn left and head down the drive. At the bottom turn left and follow the tarmacked road to the main road. NB The OS map is out of date with the forest on the right no long there. The paths through to the road are little used and difficult so please use the road to the main road.

Turn right and follow the main road for about 600m to the point where the main road turns sharp right and there is a concrete drive to Uglow Farm with a footpath sign on the opposite side of the road. Follow the drive all the way up to the farm. Pass to the left of the main farm building with outbuildings to your left. Carry straight on and find the stile which exits the farm and enters a field. 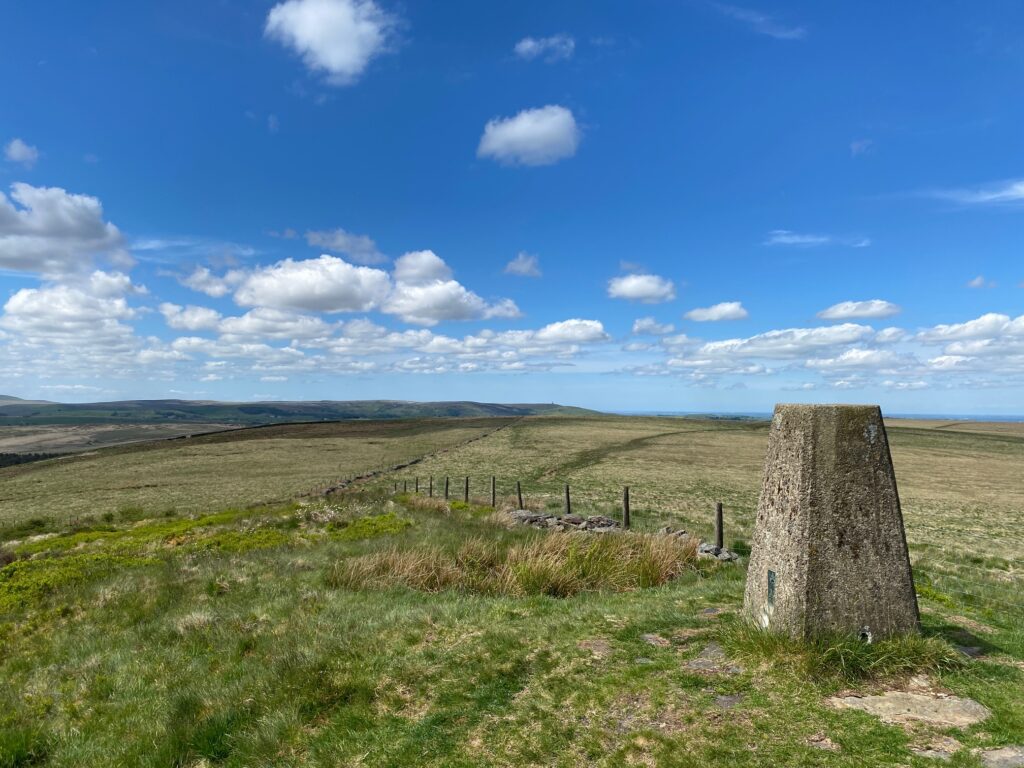 Return back to bottom and then turn left to a double stile. Carry straight on and then along a flagged section. You will then come to a small dip with a stile to your right but ignore this and find the flagged path, which continues in same direction into woods in the valley ahead. Follow the path down valley side – the initial part is quite steep and stoned so be careful in wet weather.

Towards the bottom of the valley there is a large post with a diagonal supporting post. The path splits here with the West Pennine Way turning right but we will bear left and continue down the valley along a path which turns into an old grassy track. 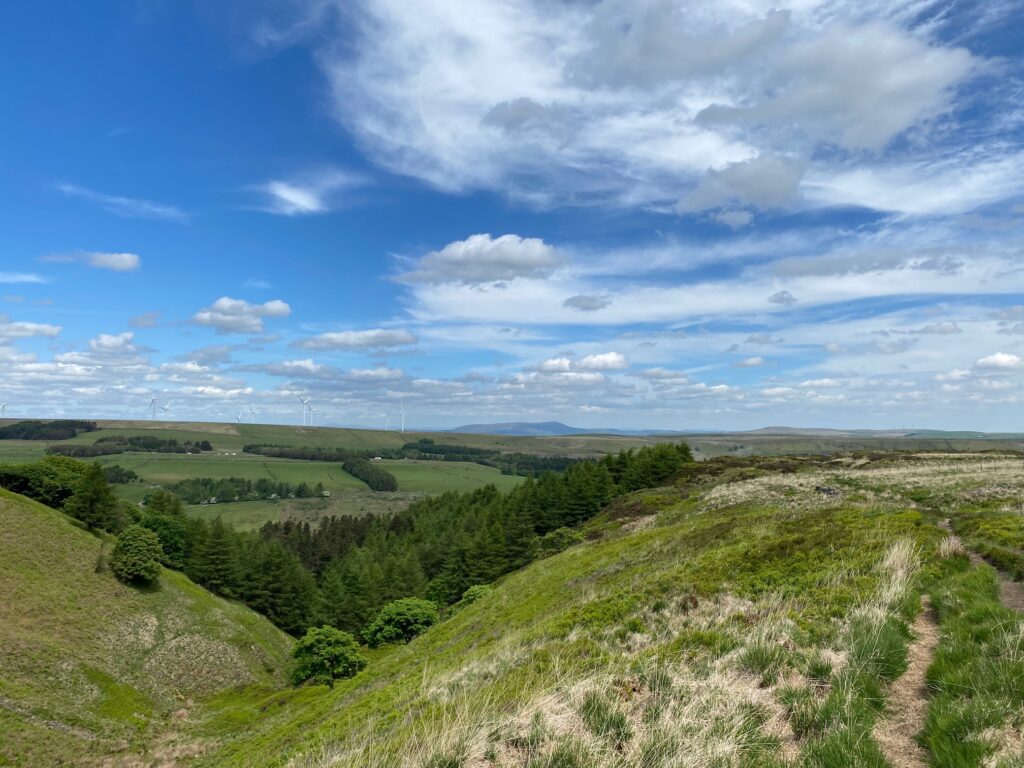 Continue along the path with the stream to your left and then another path joins from the right. Descend to small footbridge on the left. Cross and then turn right and follow stream down to reservoir and main path with runs around it. 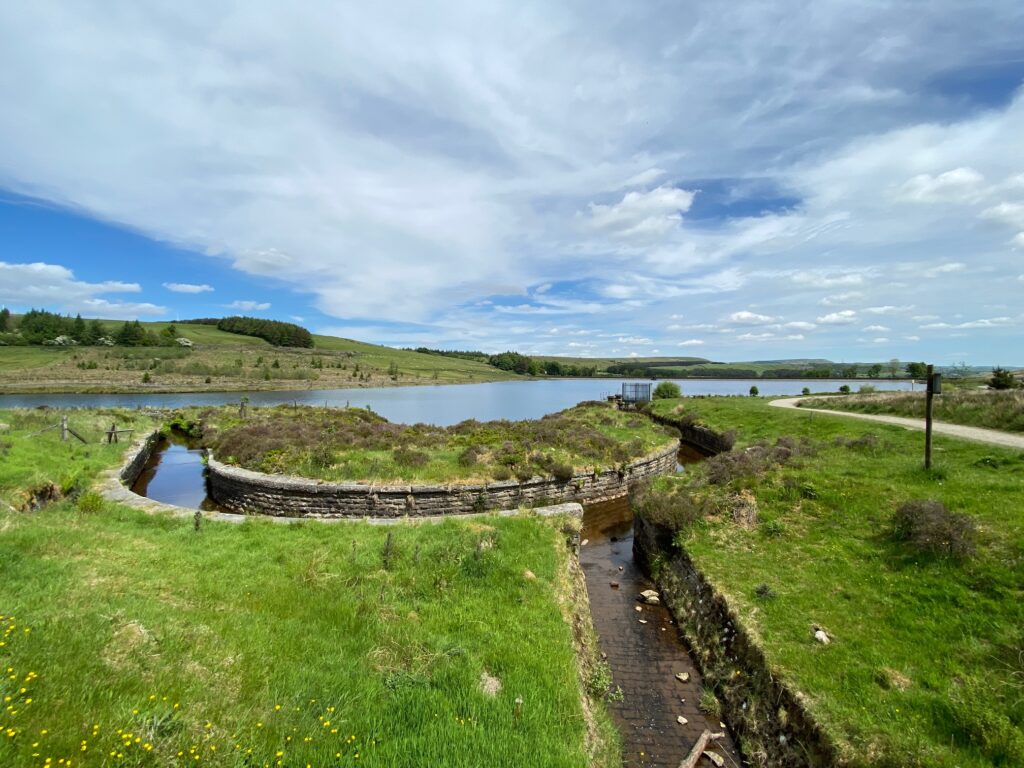 Ignore the Rossendale Way sign to left immediately after footbridge. Turn left and follow the main path up to the top of the reservoir and then through a gate and up and around the other side past remains of old buildings. Look out for several information boards which give background ion the area.

We are now at Haslingden Grane. The valley is occupied by three reservoirs – the one we have just walked around is the Calf Hey, the next one below is the Ogden and the smaller one at the foot of the valley is Holden Wood. In 1507, the hunting rights of noblemen in the ancient forest of Rossendale were abolished and people were allowed to settle and farm the land. Before the valley was flooded in 1912 there were numerous properties that made up the hamlet of Grane, with a population of around 1,300 people. There were two cotton mills, driven by water power, in the bottom of the valley but both are now covered by the Ogden Reservoir. Unfortunately, the buildings above the waterline also had to be destroyed so at to preserve the quality of the water. 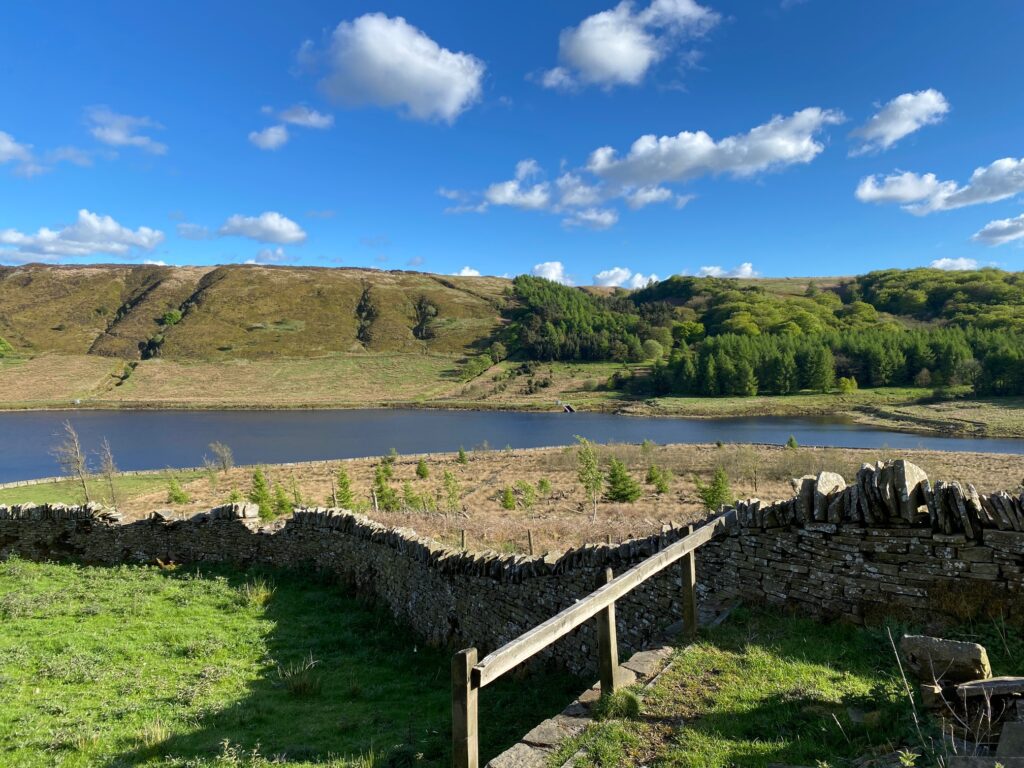 The remains of a building overlooking the Calf Hey Reservoir

Continue past the building remains on to a car park. Take the path on left about 20 m before entrance to the car park. Take the stile gate into wood. Exit shortly after on to a road but ignore this and carry straight on to pick up a path directly opposite. Carry on through the woods to main road.

Just up the road on the right is the entrance to Clough Head Visitor Centre with its cafe and toilets. This can be a useful pick up point. The Grane Road or B6232 is served by a bus route from Blackburn to Haslingden/Bury – Service 481. If you wish to return to Entwistle take the bus to Blackburn and then pick up the train from there.

Walk the Stage and then return using the Rossendale Way via Musbury Heights, Tor Hill and Beetle Hill. You can then join Stage 53 back to Edgworth/Entwistle.