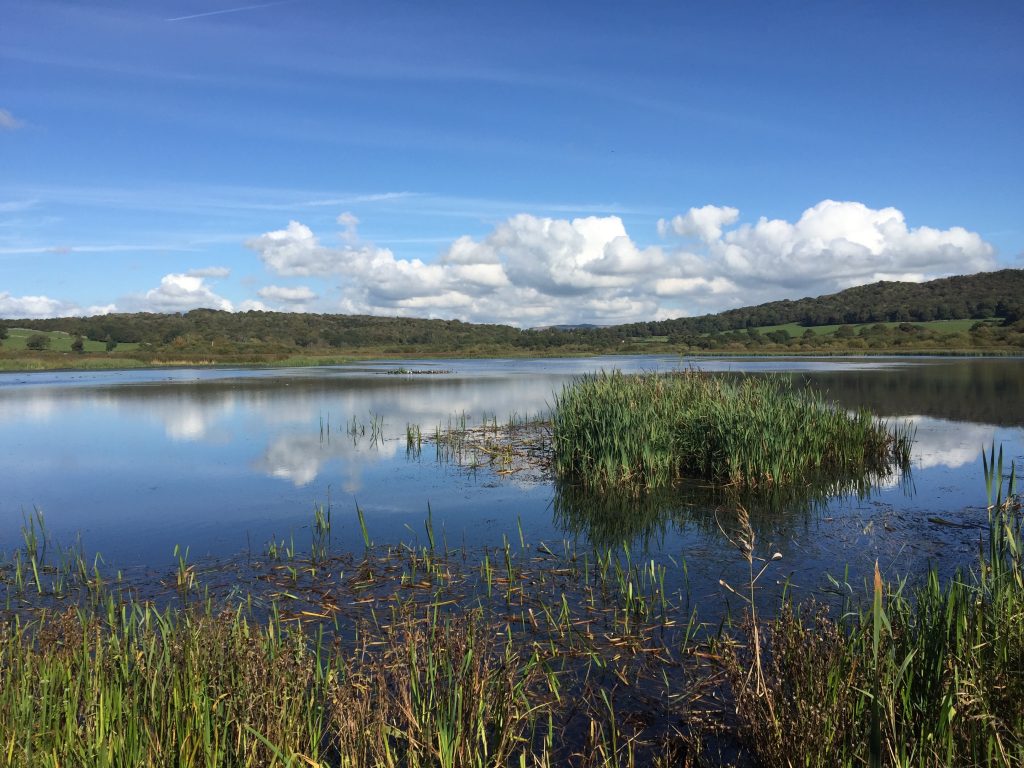 Leighton Moss with its Nature Reserve operated by the RSPB

A lovely stage, easy to underrate and one of my favourites. The stage begins with a stroll along the disused part of the Lancaster Canal known as the Northern Reaches and then climbs over a limestone ridge at Yealand Conyers. The descent to Silverdale via Leighton Hall is beautiful with views west across the coast to Morecambe Bay and includes a section through the Leighton Moss Nature Reserve. The Stage ends in the centre of the lovely village of Silverdale.

A map of Stage 39 can be found below courtesy of Ordnance Survey maps. You can subscribe yourself using this link, https://osmaps.ordnancesurvey.co.uk, which will enable you to import the GPX file which can be downloaded below.

Pass under the road to the side of the motorway. Turn right and then head up the grassy bank parallel with the motorway and you will come to the beginning of the remains of the Northern Reaches of the canal. Follow this north, with the busy and noisy motorway behind the bushes to the left. There are a number of locks on this section but all without their gates so that the water tumbles over the various sills. 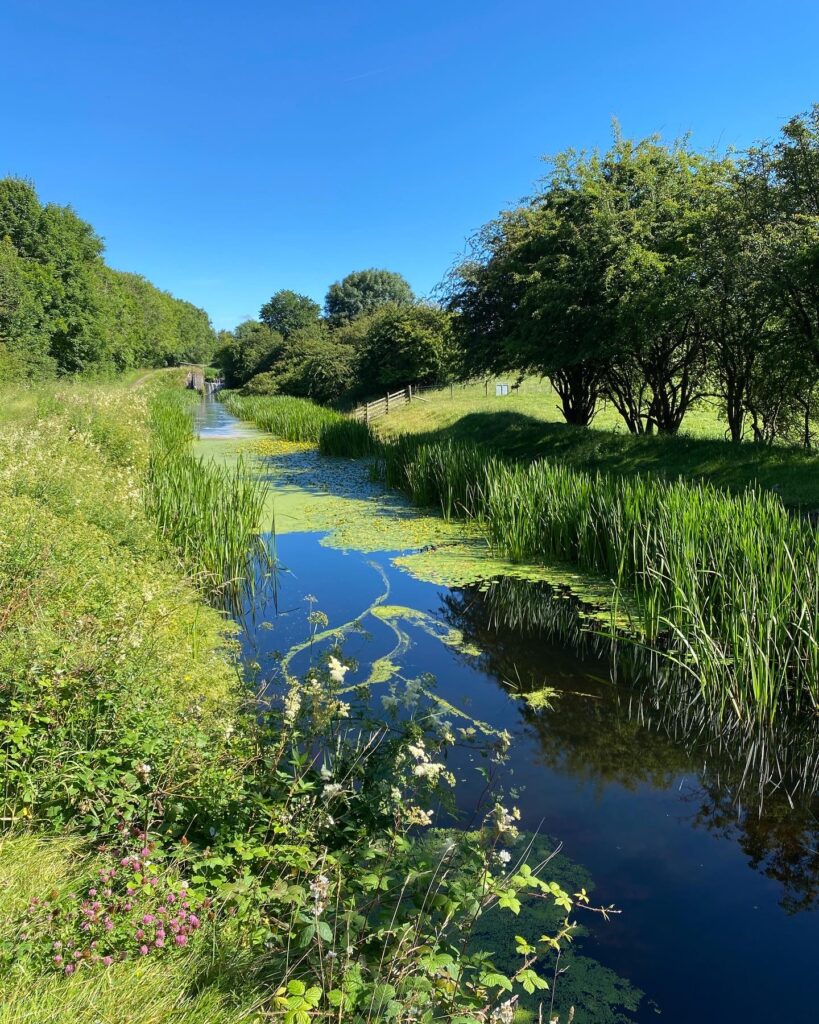 Carefully cross the road and follow the lane directly ahead up hill towards the village of Yealand Conyers. About half way up the hill turn right and follow this road past St John’s church and then into the village. Turn left and you will see the New Inn – the reason for the slight detour plus a chance to see a little more of this pretty village.

Continue up the main street until you come to another road on your right. Turn right and follow this road until it bends to the left. Opposite you should see a footpath signpost. There are three paths here but you need to ignore the two to the right and head straight ahead up the slope. You will climb up strata of limestone and exit onto a field on top of the ridge that we have been climbing since crossing the A6. Continue straight ahead and then exit the field, which takes you to the top of the other side of the ridge. There are one or two benches here, which allow you to take in the magnificent view across the valley to the Lancashire Coast and to the north the Lakeland Fells. Below you, nestled in the valley, is Leighton Hall in its wonderful setting. 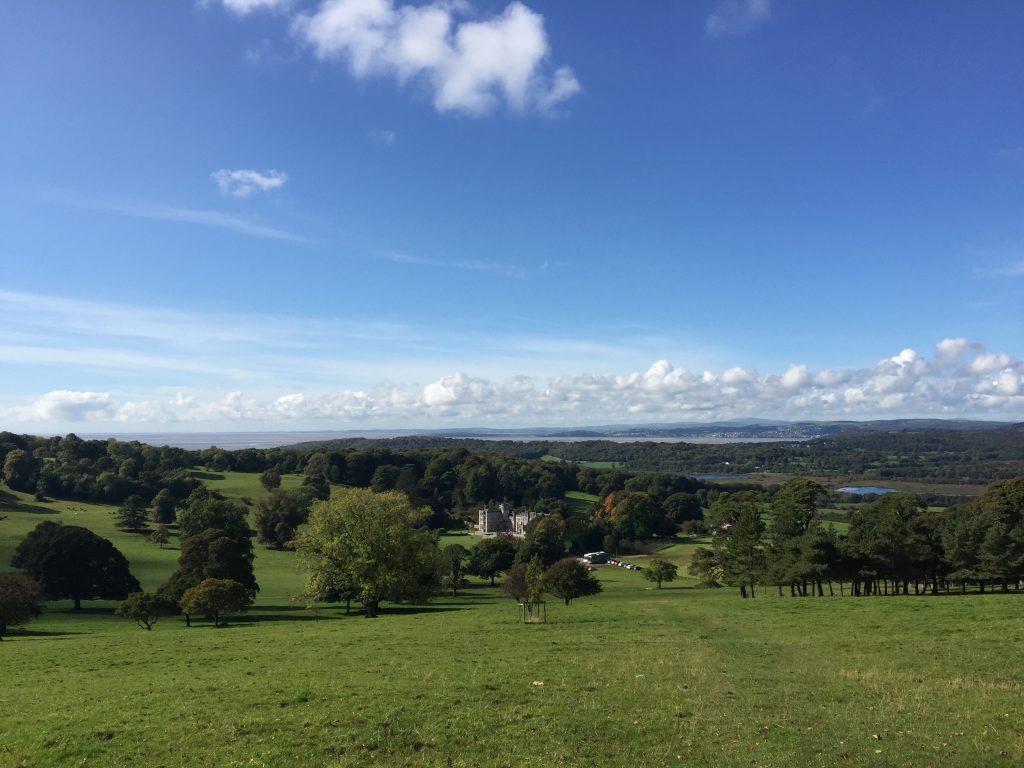 The beautiful setting of Leighton Hall

Leighton Hall dates back to 1246, when there was a fortified manor house on the site. The Hall was sacked and burned to the ground in 1715 as part of the Jacobite Rebellion and the then owner imprisoned. Fortunes improved when the family married in the wealthy Towneley family from near Burnley. George Towneley rebuilt the house in 1763 in the Adams style and replanted the grounds and estate. In 1822 Richard Gillow, the grandson of the founder of the famous Lancaster furniture makers, Gillow and Co, bought the house. From 1822 to 1825 the house was refaced in the Gothic style and in 1870 a new Victorian wing was added. The house is now owned and lived in by the Gillow Reynolds family, but is open to the public from May to September, Tuesday to Friday.

Descend the slope and head in the direction of the Hall. When you come to the drive follow this towards the house but then take the road on your right down the side of the Hall. Pass the dilapidated buildings and then pick up a tarmced lane down towards Grisedale Farm.

Continue on the lane past the farm. Take the gate, which is straight ahead, through into a field. Then follow the track, which bears off to the right. Pass through two gates and follow the track into Leighton Moss – a nature reserve in the care of the RSPB. The site is the largest reed bed area in the NW of England. The area was once a coastal inlet but has long since been reclaimed from the sea. 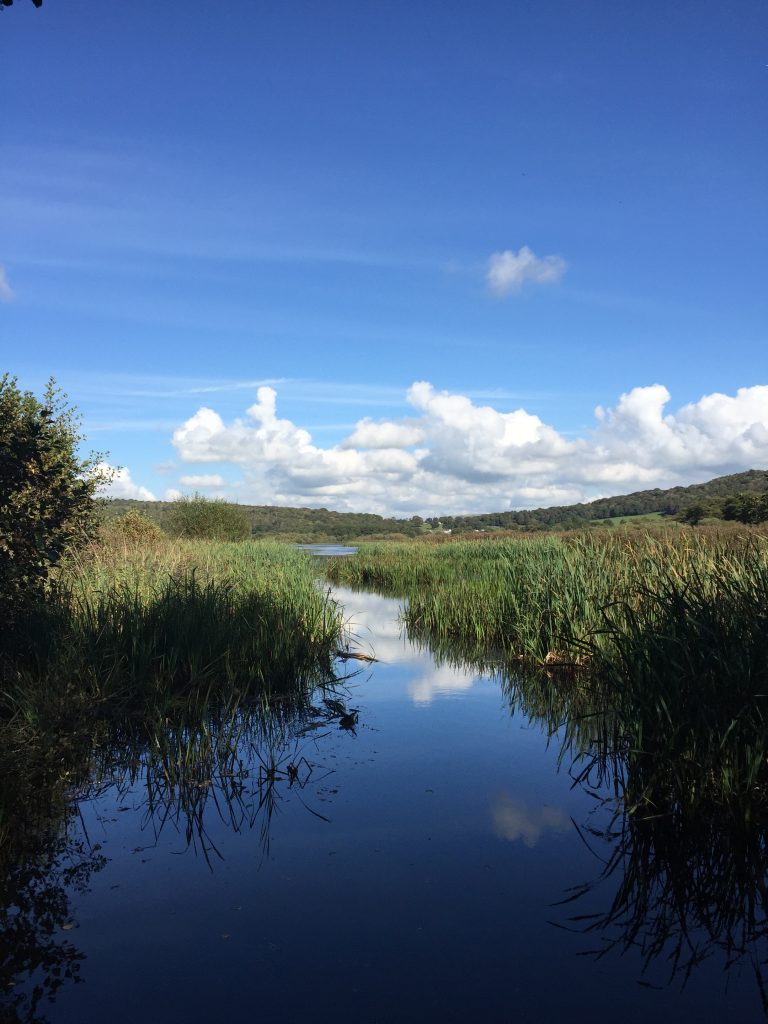 The reed beds of Leighton Moss

The track is now a very straight sandy/stony track about the width of a vehicle. Use this to traverse through the reserve. Unfortunately, you cannot see much from the track except reeds but from time to time make use of the viewing points and hides that are along the track to see the extent of the area.

Just before you come to the end of the track through the reserve look out for the substantial decking walkway on your left and follow this to the RSPB Centre, which has a café and toilets. Exit the Reserve via the shop on to the main road. Turn left and at the junction shortly afterwards bear left. Take the next road on your right (The Row) and follow this for about 400m past the Scout campsite and some properties with the lovely golf course on your right. Look out for the footpath sign on your left just before a cream bungalow with a small gap in the wall. Pass through this and follow the footpath through the woods up and then down and through a gate into a lovely field. Cross the field and then enter more woods. Follow the path through the woods and then past a property on your left to a road. Turn left and shortly afterwards at the next junction with another road shortly turn right and follow this to the next junction, which is the end of the Stage.

The centre of Silverdale with shops etc can be found by turning right at this junction on to Emesgate Lane but Stage 40 begins with a walk this way and then a large loop around Silverdale to take in the Cove at Silverdale and returns almost to this same point. If you are staying at the Silverdale Hotel carry on along Stankelt Road towards the Shore, ignoring the turning on to Lindeth Road on your left and you will find it shortly afterwards on your right.

If you wish you can complete the beginning of the next Stage (40) straight away, which will take you the long way around to the Silverdale Hotel and save some miles on your next day depending upon whether you are staying in Silverdale for the night.

The Silverdale Hotel has seven rooms and there are two B&B’s in the village.

Being a short Stage it is best to combine with Stage 40 to Warton – both are relatively short stages. These two combine well and are just under 11 miles long. You can return to the start at Tewitfield from Warton by roads via the A6, Borwick Lane and Kellet Lane or with a diversion via Borwick. Or you could begin in Borwick! These roads are not ideal particularly the road from Warton to the A6. The alternative is to head back to Yealand Conyers and then return via the quiet lane and Tewitfield Farm.