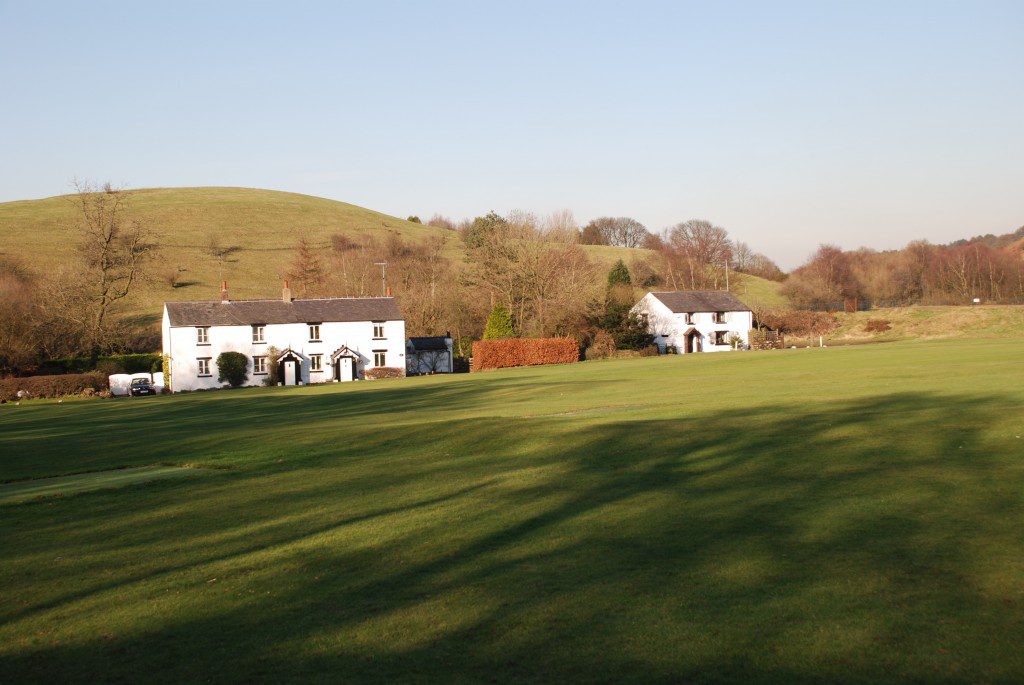 Cottages on the perimeter of the cricket pitch at White Coppice.

STAGE 11 – A6 CHORLEY to WHITE COPPICE

We leave the Leeds Liverpool canal, but not for the last time, and head to the Rivington/Anglezarke Reservoirs, which we follow on the west side, north to the beautiful hamlet of White Coppice, with its idyllic cricket pitch. Excellent views to the West Pennine Moors and across to the coast from Healey Nab.

Map of Stage 11 can be found below courtesy Ordnance Survey maps. You can subscribe yourself using this link https://osmaps.ordnancesurvey.co.uk, which will enable you to import the GPX file which can be downloaded below.

Return to the canal using the lane by the side of Fredrick’s Ice Cream Parlour. Descend to the tow path and continue north until you come to the next bridge – No 74. Cross the canal using the bridge and then follow the short path to the railway line. Cross over the lines and then on the other side look out for footbridge about 50m opposite you, which crosses a very youthful River Yarrow – last seen in Croston on Stage 3. Cross this and follow the path up the slope on your right until you meet a track on your right. Do not take this but turn left, over the stile and then the footpath along the edge of the fields towards Limbrick. At the end of the fields, the path enters a storage yard belonging to the farm and equestrian centre. Continue straight ahead on the track which runs between a few buildings before meeting a road, with the Bay Horse pub almost opposite you.

Turn left down the hill and over the River Yarrow again. There is a path along the rivers edge but it has been built over at the far end by a renovated cottage and its driveway. The only way through is to climb over the wall onto a new driveway and then make your way to the front entrance of their driveway. To avoid this, miss the footpath and turn right into Back Lane shortly afterwards. Follow the road around and then underneath the huge bridge, which allows us and the river to pass underneath the M61 above. It is quite a contrast to John Rennie’s viaduct in Adlington, which we saw on the previous stage.

The route then continues along the road, which wanders circuitously, first north, then east and then south. Now look out for the Bridleway sign on your left, which initially uses the drive to Kays Farm. There is an alternative footpath route, which follows the Yarrow valley shortly after the Motorway and then heads up to the road, just south of the start of the Bridleway at Kays Farm. However, the path can be very muddy and not always easy to follow so it is best to just follow the road.

Having left the road, look out for the path on your left, which then becomes Heapey Fold Lane, which is thought to be the line of an old Roman Road to a Signal Station at Mellor, which we will visit on the Northern Loop. The Lane is well made and allows for easy walking towards the hill ahead – Healey Nab and with great views of the beautiful water filled valley to your right.

The water to your right is actually a man made reservoir – Anglezarke Reservoir and is one of seven built between 1850 and 1857 for the Liverpool Corporation, designed by Thomas Hawksley and still today supplies the city of Liverpool. To the south are the Upper and Lower Rivington (the largest) Reservoirs, together with the Yarrow reservoir, which sits slightly above the valley on the eastern edge. We will see these shortly on Stage 12. The other three are further north near Abbey Village but are connected by the Goit – a man made over flow channel. We will see these on Stage 14. There are a number of smaller reservoirs, which predate these larger reservoirs, which supplied the town of Chorley in the valley to the West. If you keep looking to your left in the fields are two round stone structures, which I believe are airshafts for the original water supply tunnel for the Chorley Waterworks also constructed in the 1850s.

Both the River Yarrow and River Douglas begin life on the Moors on the east side of the reservoirs and now drain into the reservoirs. The Yarrow is fed from an overflow near Cuncliffe Farm on the east of the Upper Rivington Reservoir and the Douglas from the southern end of the Lower Rivington Reservoir. A number of hamlets and buildings were lost when the valley were submerged.

Keep on the track, rounding the southern edge of Healey Nab, until shortly after you pass a sign for the Nab Hill Memorial Forest. Do not take the gate immediately after this but continue for a few  metres more, to find a path on your left, which is clearly marked with a footpath marker. This quickly turns into a narrow stoney track, which initially makes its way at right angles to the Lane up the hill towards the summit of Healey Nab. There are excellent views from here across the valley towards the peaty moorland of the West Pennines with its distinctive moorland grasses. Further north the slope of the Moorland is forested which is in the area of Brinscall. Try and keep this view in your minds eye as we will look at the origin of this landscape at the beginning of the next stage, when we are down in the valley and just before we leave White Coppice.

Follow the path and then turn left into the corner of wood that covers the summit where you can find two notice boards. The woods are actually covered by mountain biking tracks so do be careful. Follow the path up the hill along the edge of woods with the wall to your left. After a very short climb you can see a cairn on the other side of the wall, which marks the top of the Nab and which affords great views across Chorley towards Harrock Hill in the distance, with its distinctive clothing of separate coppices. Retrace your steps back into the wood and continue along the path, which follows the boundry of the wood – do not turn right and follow the red routed bike track. The path now descends the hill for a short while before heading right into the woods. We are following the concessionary bridleway on the OS maps. This continues through the woods, descending diagonally across the hillside before meeting a more substantial track, which then roughly follows the contours, if not slightly back up hill, in a northerly direction. This track takes you to the edge of the woods, which you can exit besides a gate into a track, which continues north, past some houses and then meets a main road at a sharp bend. Turn right and follow the road for about 150 meters, before crossing a stile on your left into the adjacent fields. Follow the path through the fields down to the small reservoir in the bottom of the valley and then bear right following a small stream up to a road with some cottages and an old converted school. If the conditions are wet you can follow the road, which runs adjacent to the path and enters the village at almost the same point. Continue along the road in the same direction, which then becomes a bumpy track. Pass the Pre School and reservoir on your left until you come upon more white washed cottages and the cricket pitch of White Coppice. Bear right, through the small car park towards the cricket pavilion. 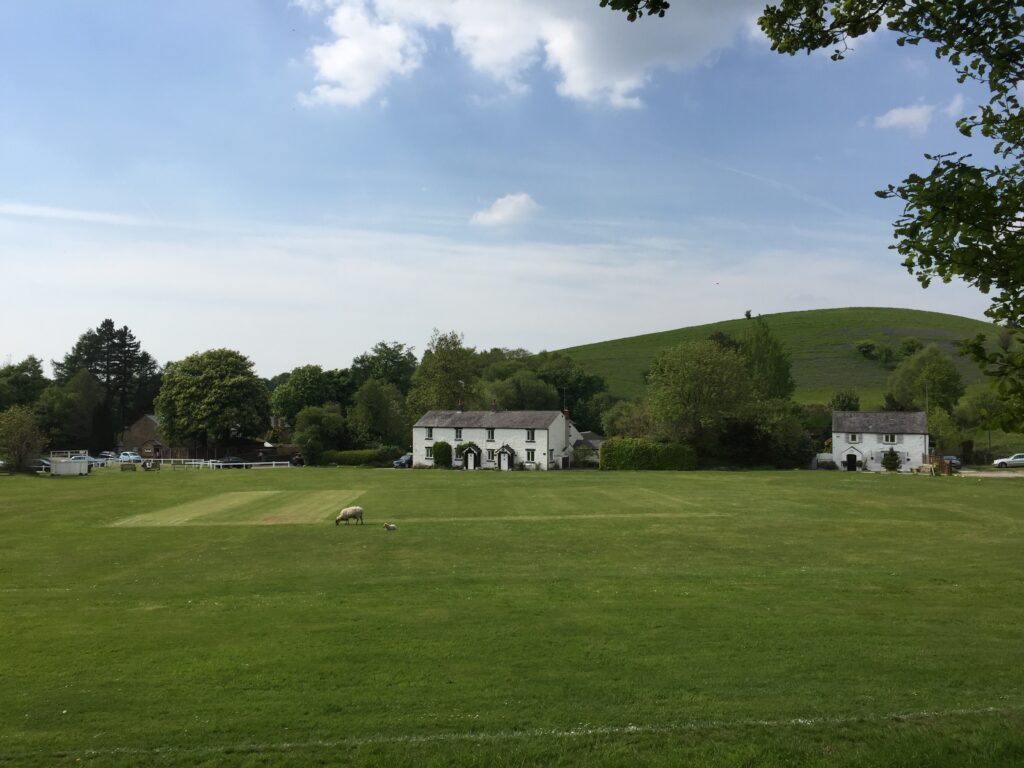 No need to mow this cricket pitch!

There is no accommodation in White Coppice but is just a short taxi ride into Chorley, which has a number of hotels.

Complete Stages 11 and 12 – 11 miles in total. Then return via Horrobin Lane, Rothwell’s Farm, Addlington and then the complete the end of Stage 10 along the Leeds Liverpool Canal. The total distance is 15 miles. This can be reduced by 1 mile by returning back via The Street and Chorley Golf Club or by a further two miles by missing the last part of Stage 12.