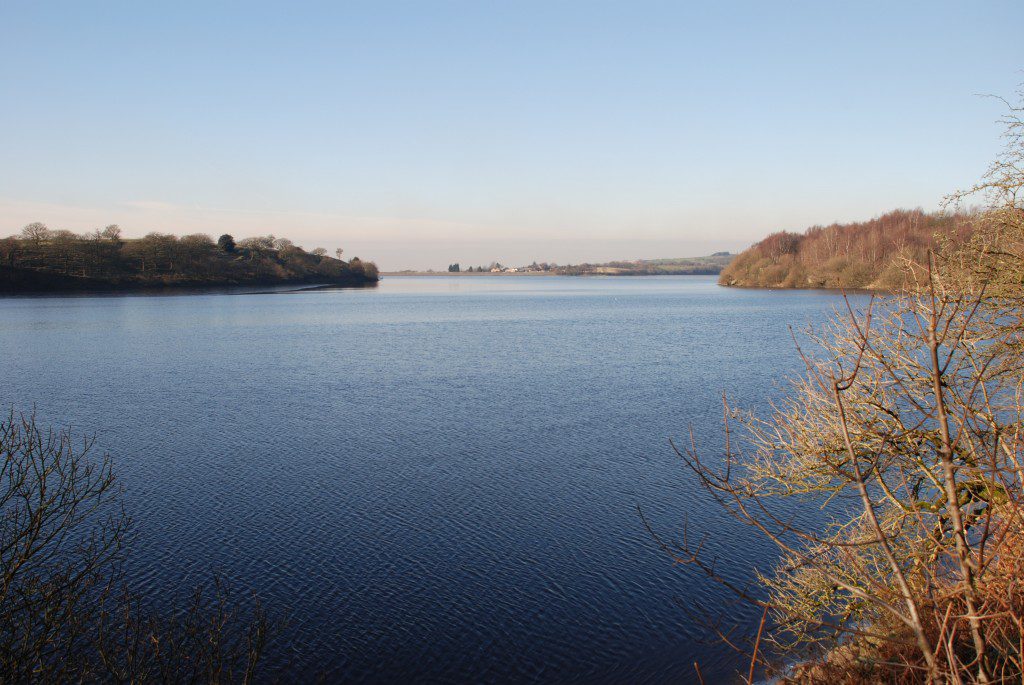 Leave White Coppice and head south to Rivington along the eastern shore of the Reserviors, with more beautiful views. Also we have an excellent lesson on the geology of the area and the impact of glaciers.

Map of Stage 12 can be found below courtesy of Ordnance Survey maps. You can subscribe yourself using this link, https://osmaps.ordnancesurvey.co.uk, which will enable you to import the GPX file which can be downloaded below.

Head past the pavilion and through the gates over The Goit ie the man made water course which carries water down from more reservoirs further north via Brinscall towards the reservoirs at Rivington.

Before starting the walk there is an information board, which explains a little of the geology of the area and concentrates upon the fault that can be seen in Dean Brook, which comes off the moors almost opposite you. In addition to quarrying the hardwaring gritstones, the faulting gave rise to a small amount of lead mining and even some other minerals.

However, there are two other geological phenomina, which I think are more impressive. The moors to east are made up of Millstone Grits or more specifically the Fletcher Grits of the Namurian Stage (315m years old) of the Carboniferous era. These form the whole of the moorland to the east rising almost 250 meters above us on Great Hill and Black Hill. Across the valley Healey Nab, which rises to only 200m is made from slightly younger Millstone Grit rocks (Rough Rock – approximately 313m years old) and then further west beyond that are the even younger Coal Measures that underlie most of the town of Chorley. To understand the juxtaposition of successively younger rocks at lower levels requires extensive faulting in the area, far more extensive than the fault in Dean Brook, dropping successively younger rocks down to the west/north west.

The impact of this faulting and the resultant topology ie the highly erosion resistant Millstone Grit moors to the east, with some resistant bands of sandstones in the Chorley plain, has affected the impact of glaciation upon this area. Firstly you can see examples of drumlins, rounded hills, in the valley around White Coppice, which are a very typical feature of a glacial environment. The hill just behind the white washed cottages on the other side of the pitch is a perfect example of a drumlin. These are made from sediments deposited from beneath the glacier and shaped by the movement of ice. In addition to this the valleys in which the reservoirs now stand are deep and thin and are thought to be glacial melt water channels ie have been eroded by strong rivers flowing off, under or along the sides of glaciers as they melted and retreated. It is very likely that these channels were lateral channels, running along the side of the glacier in the valley and with the moorlands producing a barrier to the east. Indeed the glaciers would melt away first from the thinnest parts, which would be along the sides of the valleys adjacent to the ice free uplands to the East.

In my investigations, there seems to be very little agreement by scientists over the origin of many of the glacial features that we can see in Lancashire. A number of scientists envisaged a serious of lakes being left behind in East Lancashire and the Ribble valley at various heights and these draining via meltwater channels as they escaped to lower and lower heights. As the water drained away, successive channels would be left stranded above the new lake level and therefore the water would have to find a new route to escape. The meltwater channels in this area including the cited channel to the North in Brinscall, which fed and created the channels now occupied by the Reservoirs, were apparently left dry as the water found a new channel at Withnell Fold a few miles to the west – see Stage 13.

Turn right and follow the path along the valley south, with the steep hillside of Anglezarke Moor to your left. Follow this for about 1km until you reach a road with a house to right which is know has the Waterman’s cottage. 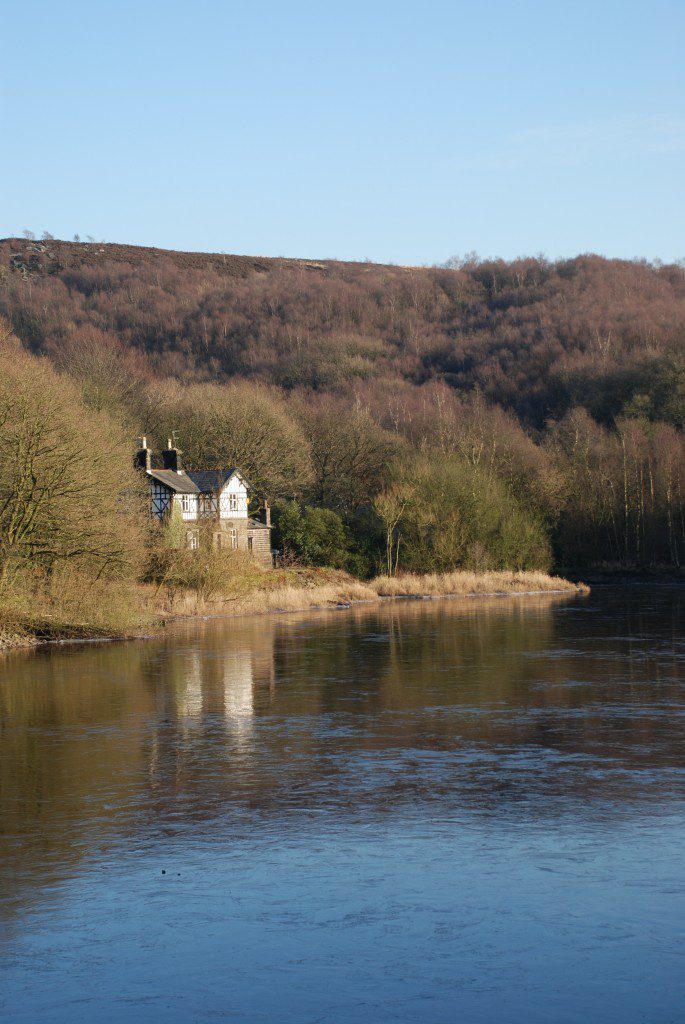 The Waterman’s Cottage on Anglezarke Reservoir.

Turn left and then enter the woods on the other side of the road via the gate in the wall. Ascend the steps and follow the path through the woods, until you exit into a field with great views south of the reservoir. If it is wet you will note that the soil is very clayey and sometimes very yellow. The field here is made from “boulder clay” (or Diamicton as it is now termed!!) deposited by glacial action.

Enter the woods after the field and descend almost to the lake before heading up hill to your left. This small valley is bounded by an earth wall, which creates a small reservoir – the Hugh Bullough Reservoir but originally called the Chorley Reservoir – this was the first to be created in this area in the 1850s and originally provided a fresh water source to Chorley. Follow the path up the right hand side of the dam and around the side of the reservoir before descending down the other side on an earth embankment. This small valley is quite interesting in that if you strip away the man made reservoir, we have a small almost semi circular valley which comes off the main valley to the west and then rejoins. It is thought that this represents a small over flow glacial channel, which was created when water levels were particularly high and some of the water escaped through this small valley. When water levels dropped the valley was left “hanging” as the water continued to erode down in the main valley now occupied by the reservoirs.

Continue along the edge of the lake on the now tarmaced track. There is a concreted path on your left, which makes its way through the bottom of Leicester Mill quarries. Whilst largely overgrown you do get some good glimpses of the huge quarry face and the thick grit stones, which were quarried here, mainly for building materials. Continue along the track until you come to a road. Continue straight ahead and then turn sharp right and follow the road along the waters edge. On the opposite side of the road you will pass two large man made overflow channels which cascade down the hill to the east, feeding the main reservoirs. At the top of these channels is another reservoir – the Yarrow reservoir, which again occupies a small valley which is probably another subsidiary meltwater channel, which had been left “hanging”. 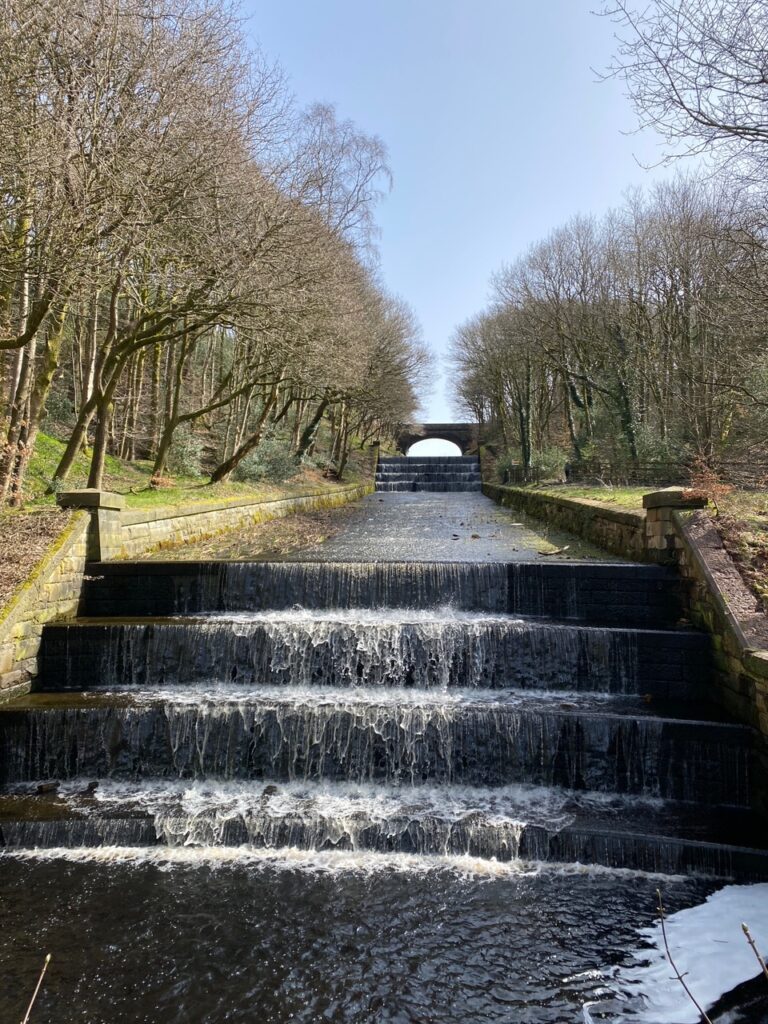 Overflow channel down from the “hanging” Yarrow Reservoir.

The obvious route now would be to take the path up to the Yarrow reservoir and then continue along the paths on the eastern side of the reservoirs. However, the route now follows the road on the dam, which separates the Anglezarke reservoir to the north from the Upper Rivington reservoir to the south, to allow us to walk on the western side of the water, which has better views across the water of Winter Hill, Rivington Pike and the Dovecote.

Having crossed the dam find and follow the tarmaced lane on your left which runs south along the lakes. On your left are a number of buildings including “The Street”. Just after this, the view opens up and you can see, the TV mast on Winter Hill, followed by the Dovecote and then further south the monument on Rivington Pike. We will visit all of these on Stage 13. The track then follows the very edge of a reservoir and you can see the overflow, protected by wooden stakes to stop debris from clogging up the channel, which cascades down a series of steps into the River Yarrow and its original valley below.

When you meet the main road at Horrobin Cottage turn left and use the road to cross back to the Eastern side of the Reservoirs. On the other side of the water continue along the road until you come to the village green of the village of Rivington itself. 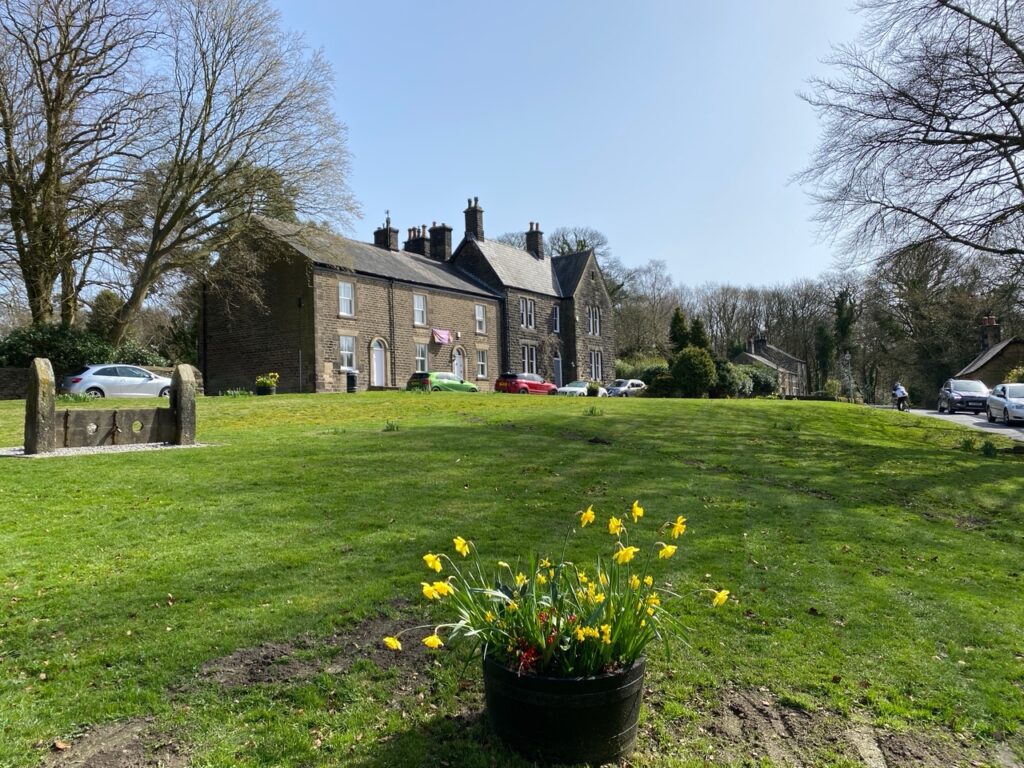 The green at Rivington, complete with stocks.

Before this note the entrance to the church on your left and the primary school on your right. The latter is the site of the Rivington Free Grammar School, which was given its Royal Charter in 1566. The school was founded by James Pilkington who was then the Bishop of Durham and educated at Oxford. The current building dates back to 1714, with extentions added in 1904 and 2004. Members of the Pilkington Family are buried in the church. 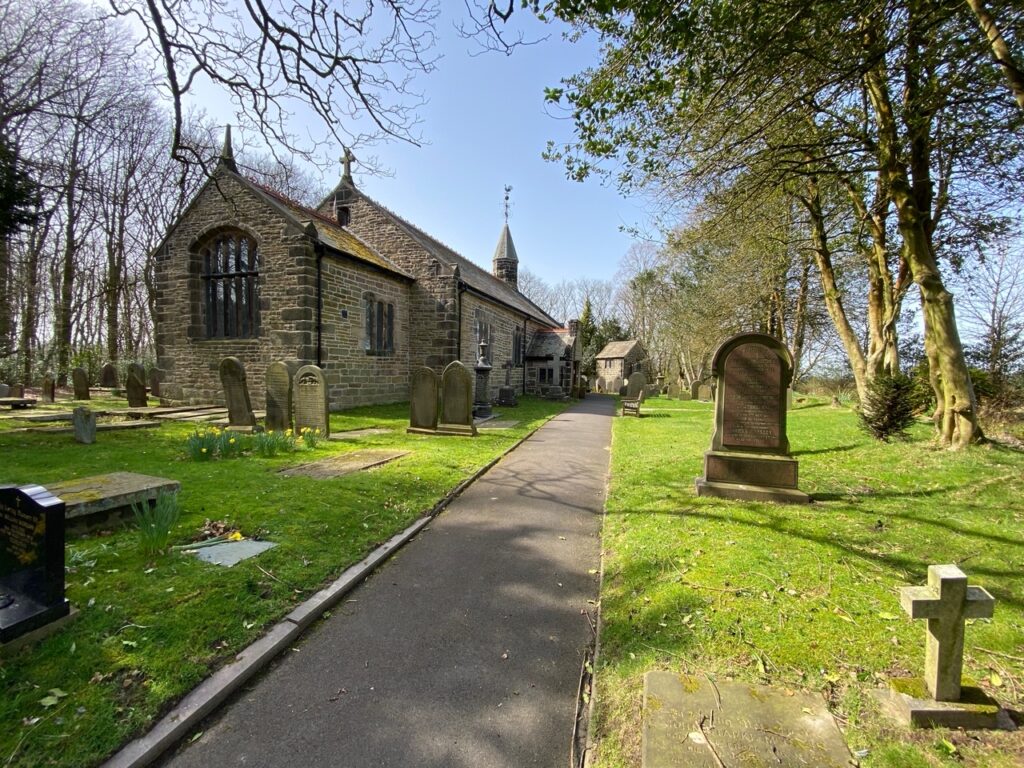 A very comprehensive history of Rivington can be found at www.angelfire.com/in/rivington/

I have not been able to find any accommodation within Rivington but it is a short taxi ride to either Horwich, Adlington or Chorley, which all have overnight options.

Complete Stage 12. Return north on the eastern side of the Upper Rivington Reservoir via the Yarrow Reservoir. Cross over to the Western side of the reservoirs using the road at the end of the Anglezarke Reservoir. Take the first path on the right immediately after crossing. Join Charnock Back Lane and then pick up Heapey Fold Lane and complete Stage 11 back into White Coppice. Total number of miles is around nine.