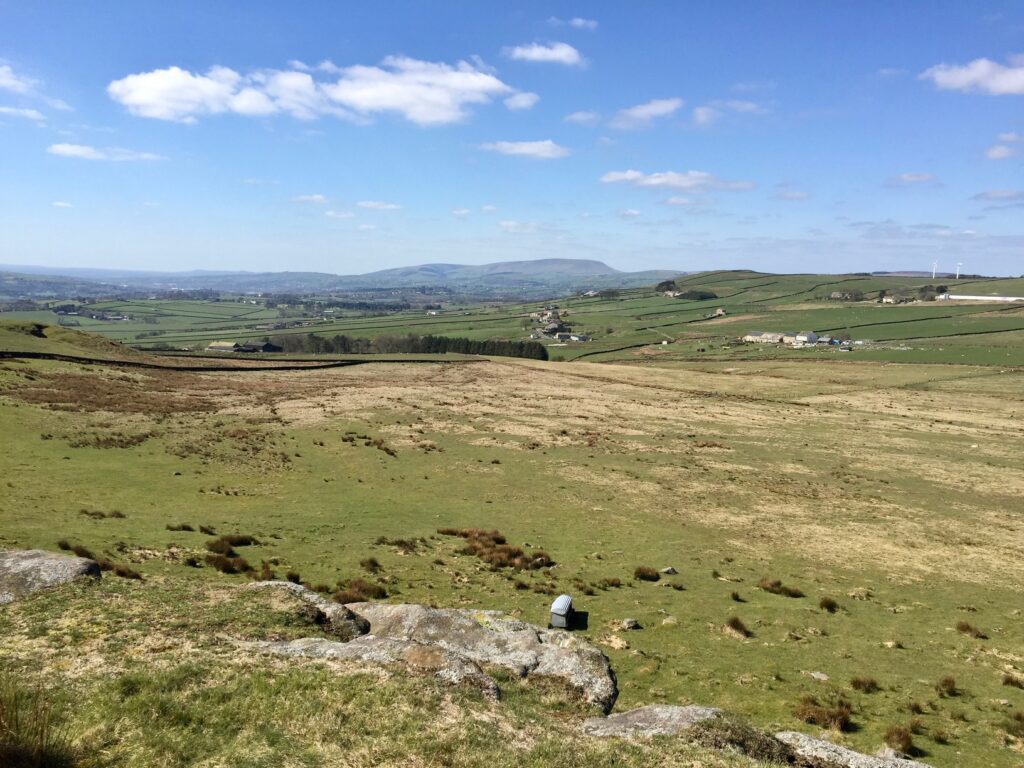 Another modest but still a pleasant walk with good views, initially back to Weets Hill and then after the climb around Kelbrook Moor we can see down into Yorkshire (Airedale) and also onto Boulsworth and Pendle, two of Lancashire’s great hills.

Map of Stage 47 – Unfortunately OS maps of the Eastern Loop are not provided. However, if you e mail lancashireway@aol.com and a full GPX file of the Eastern Loop will be sent to you and this can be down loaded on to OS maps at www.osmaps.ordnancesurvey.co.uk. As an alternative you can view the interactive Map of the Stage below and/or download the GPX file for this Stage only by following the instructions below.

We follow the PENDLE WAY for almost the whole stage with just one small detour. It is well signed so please use the distinctive witches signs to help with directions.

The Stage begins on the A56. Cross the main road and follow School Lane opposite. Pass the old grammar school on the left.

The Old Grammar School, School Lane, Earby is owned and run by Robert Windle’s Foundation, a registered charity whose role is to provide help with education to the youth of the ancient parish of Thornton-in-Craven, which includes Thornton, Earby, Kelbrook and Harden. It has been doing this for over 400 years with the building built in 1600. The Windle family were prosperous farmers in the area and Robert went to Oxford University and became a rector after that. He died in 1591. 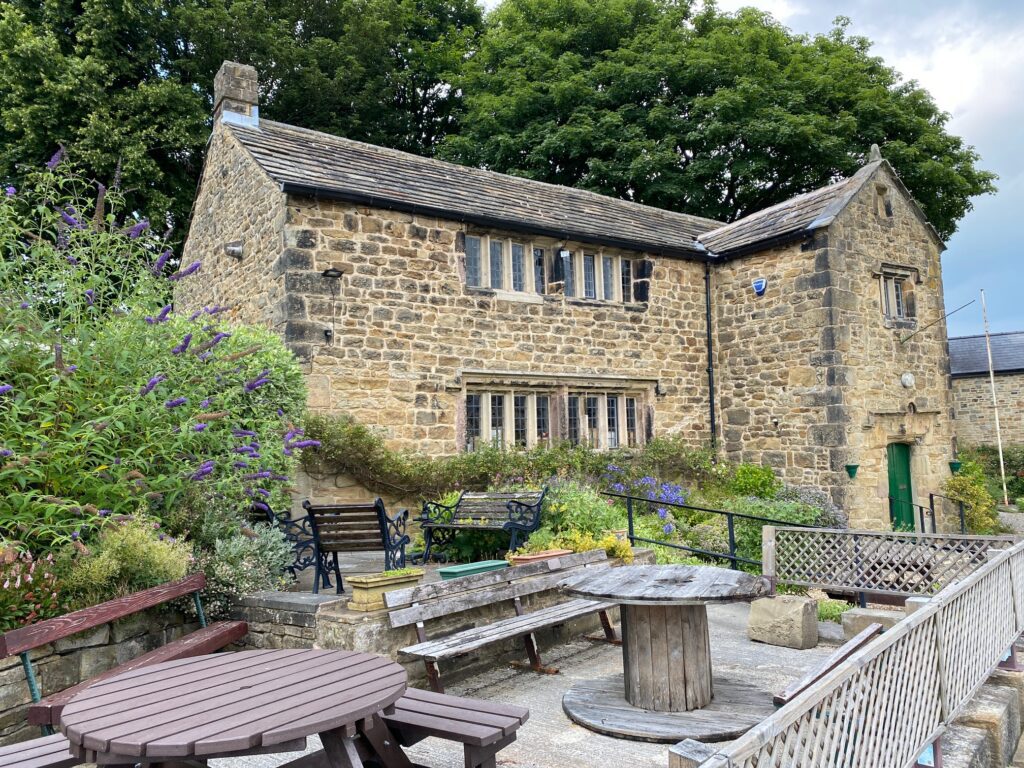 The Old Grammar School at Earby

Cross over the river and bear right and then straight on to a roundabout. At the roundabout carry straight on into Water Street (second exit), which is the main road through Earby. Shortly afterwards the road splits at a small green. Bear left here and carry on along Water Street. Pass the Red Lion pub and continue along Mill Brow Lane and then Birch Hall Lane. Pass the Earby Youth Hostel on your left or even stay the night!

Continue up the hill. Just before a turning on the left, with a street sign for Birch Hall Lane, and just before a row of stone cottages on the right, is a footpath sign on your right. Turn right and follow this good path called Mill Lane to the next road. Turn left and then immediately right and use the wall stile to enter the field opposite. Carry straight on in the same direction. Pass through a large metal gate and then carry straight on walking parallel to the fence on your left using a track first and then a path. Bear left at the wall towards a gate stile, through this then straight on and then bear left to pick up a track behind the farm called Moor Hall. Pass through a large wooden gate and then bear right on a track to a corner fence post. Follow the fence on the right. Pass through a gap to the left of a large wooden gate and carry straight on, pass a wooden seat and two large trees. Pass through a stile by a large wooden gate and straight on just to the left of a lone tree and then onto a large wooden gate. Here you will find Pennine Bridleway and Pendle Way signs. Bear right along the edge of a small field to the corner and use the style/gate combination to enter a covered path leading onto a grassy track. Turn left and at the road turn left again pass Heads House Farm and continue along the track firstly in an easterly direction and then in a south easterly direction.

This next section can be a little confusing as the Pendle Way (PW) and Pennine Bridleway (PBW) diverge, cross each other and then follow different routes until they meet up again on Warley Wise Lane. We of course will follow the Pendle Way for most of the time.

After Heads House the track pass through a gate and then further on enters a field and becomes a path just after a large metal gate on your left. Pass through one large wooden gate, two gate posts then another large wooden gate. Then bear right keeping right of ditch until you come to a Pennine Bridleway marker. Go straight on to another gate with a Pendle Way signpost. At this point the PW and PBW diverge. The PW bears right across the boggy field in a SE direction whilst the PBW bears left in an easterly direction on a better path towards Harden Old Barn. I suggest you follow the PBW up the slope and just before the second gate near the farm turn right and head down to a wall which joins the PW again briefly.

At this point the PBW heads off east but we will leave it for the approximately two km and cross over the wall via the wall stile and continue south. Take a sighting at this point as the path is indistinct. Directly ahead of you, in an approximately south south east direction, is a footbridge and beyond that you will see a telegraph post with a fence lined by trees behind it, which is the boundary of the garden of Harden Clough Farm. Just behind the telegraph pole is a stile to enter the garden. 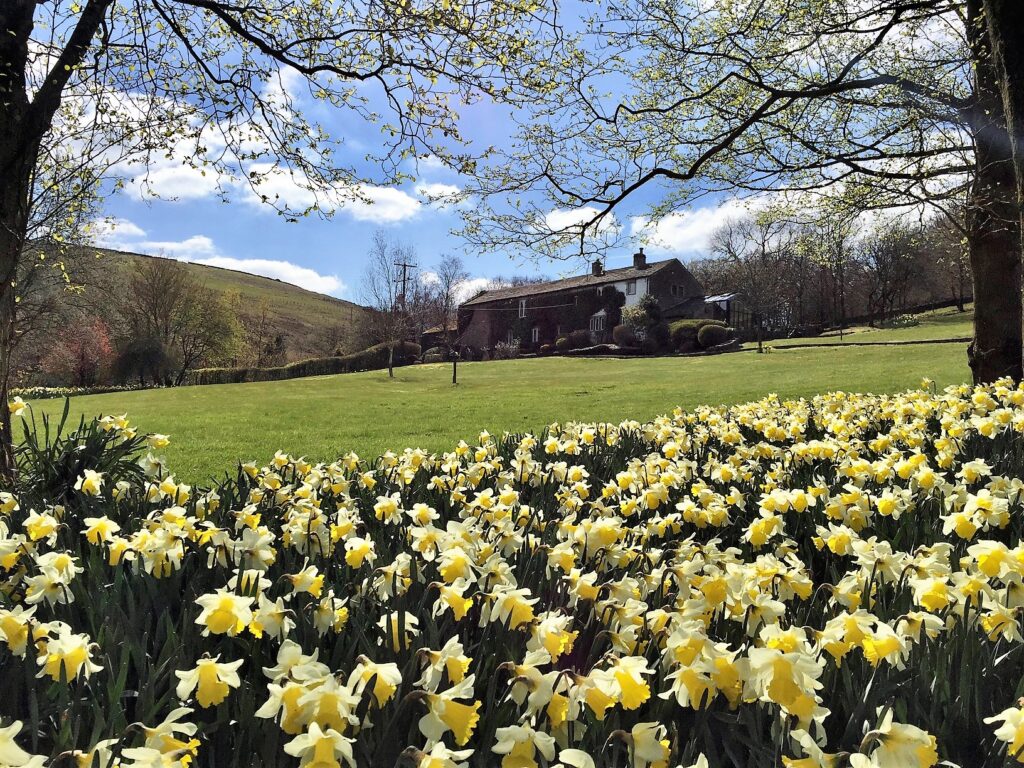 Enter the garden and follow the path in the garden around to the left and then the front of the house. Pick up the drive and head down to the stables with a cobbled drive. Turn right through a double gate and then straight on to a gate to exit the property and then cross a footbridge. Carry straight on for about 20m and then bear right up the slope of the hill roughly following a line of telegraph poles to your left. Cross over a stile and then head in the same direction towards another property – Scald Bank. Pass behind this and then head to the stone track that services the property.

Turn left and follow the stone track for about 50m. Leave the track by bearing right to a wall stile with PW markers. Cross into the next field and head diagonally across it to another marker and then carry on straight on to the wall opposite. NB The path here is indistinct but use the four post finger post in the middle of the field to maintain the correct direction. Turn right and follow the wall up the steep slope and then down to the pub and road. The pub is called the Black Lane Ends and will provide a good stop for refreshments if required.

Turn left and follow the road for 50m and then turn right into Warley Wise Lane. Follow the lane for about 500m and then turn right as we join the PBW again. There are good views east into Yorkshire here with the border being just about 300m further down the lane. About 3km further on the Pennine Way cross the Warley Wise Lane. If you were to carry on then at the bottom of valley is the River Aire as it makes its way down from Skipton to Keighley and then onto Leeds.

Follow the track and then the zig zag up hill and out from the trees at the top. The track then turns right at the top and then bears left to Knarrs Hill Farm but at this point we carry straight on along a grassy track up to the trig point on Knarrs Hill. Make use of the benches on the other side of the wall to take in the view including Pendle Hill to the west.

Return back to the southern side of the wall, although strictly the Pendle Way continues along the other side of the wall before crossing back, and carry straight on in the same SW direction along the ridge. The track then turns left and shortly afterwards use the stile gate to pass into the next field. Turn left and follow the boundary wall to a large wooden gate. Go through the gate and turn right and follow the boundary wall west. At this point the PBW and PW diverge with the PBW continuing straight on south but we will pick it up again soon!

After 200m cross over a track with a PW Marker and pass to the left of a house – Monkroyd Boarding Kennels. Carry straight on in the same direction parallel with the boundary on your right. Head to the bottom of the field looking for a large ladder stile. Cross into the next field and then bear right and head to the bottom right corner of this where you will find a stone footbridge. Cross the footbridge and carry straight on with a wall to your left. After 50m turn left and cross over the wall using a stone stile. Carry straight on to a footbridge and then use a gate stile to enter some newly planted woods. We will now continue in a southerly direction with a small stream to our right. Eventually, we will come to a gate by some houses, which we will pass behind and then exit onto the main road (A6068 – Keighley Road) into the village of Laneshaw Bridge.

Immediately opposite is a bus stop with the excellent M4 bus service from Keighley to Burnley via Colne and Nelson. It is just a short walk from the outskirts of Colne near the Boundary Mill outlet to Barrowford if you are walking the Loop in sections each day.